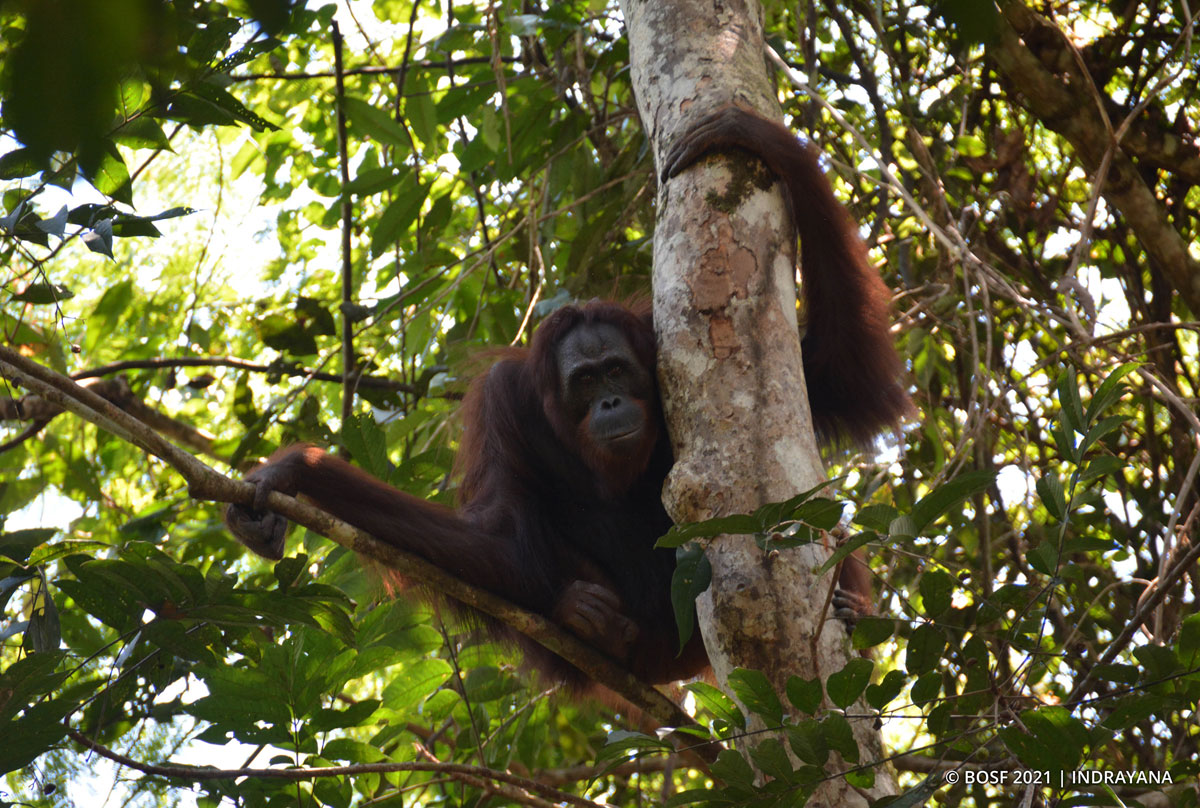 February 24, 2021 — After a year of not being able to carry out orangutan release activities due to the global pandemic, the BOS Foundation, in collaboration with the Central and East Kalimantan Natural Resources Conservation Agencies (BKSDA), on the 16th and 18th of February released ten orangutans. Seven of the ten were released in the Bukit Batikap Protection Forest in Murung Raya Regency, Central Kalimantan; while the other three were released in the Kehje Sewen Ecosystem Restoration Forest in East Kutai Regency, East Kalimantan.

The global pandemic brought about by the COVID-19 virus has affected everyday life everywhere, including the BOS Foundation’s work in conserving Bornean orangutans and their habitat. In response to the pandemic, in March 2020, our team implemented health protocols that would allow us to continue our conservation activities. This included closing our rehabilitation centres to visitors, volunteers, and researchers; and restricting activities that require travel, including orangutan releases.

After carefully covering all areas of concern with our new protocols, we decided it was time to start releasing orangutans back in the forests of Central and East Kalimantan. These two releases were carried out under strict health protocols, covering three major areas: testing, personal protective equipment (PPE), and physical distancing.

All orangutans who were released were tested for the presence of the COVID-19 causing virus using PCR testing. All BOSF staff and externally hired agents are also tested within 24 hours of the release with COVID-19 rapid antigen tests. But even with the testing, only designated staff were ever in proximity of orangutans and when they were, they wore full PPE. Lastly, we went to extraordinary measures to avoid human settlements, as the orangutans were driven directly from the rehabilitation centres to the airfield where they were be taken by helicopter to our release sites. When travelling entirely overland, these trips can normally take days and pass-through dozens of villages, but with a helicopter, the journeys required no human contact and reduced stress by taking under an hour.

The 36th orangutan release in Central Kalimantan was a 2-day operation on the 15th and 16th of February. The orangutans were sedated prior to the journey, at around 2 p.m. local time on Day 1. The seven orangutans included five males (Bali, Hugus, Noel, Strada, and Deijo) and two females (Nenuah and Disha).

The Bukit Batikap Protection Forest, located in the heart of Kalimantan, is very far from the BOS Foundation’s Nyaru Menteng Orangutan Rehabilitation Centre. Transporting orangutans via land and water typically involves a 3-day and 2-night journey to reach the camp in the forest. However, with air transportation, the total trip takes less than 24 hours. 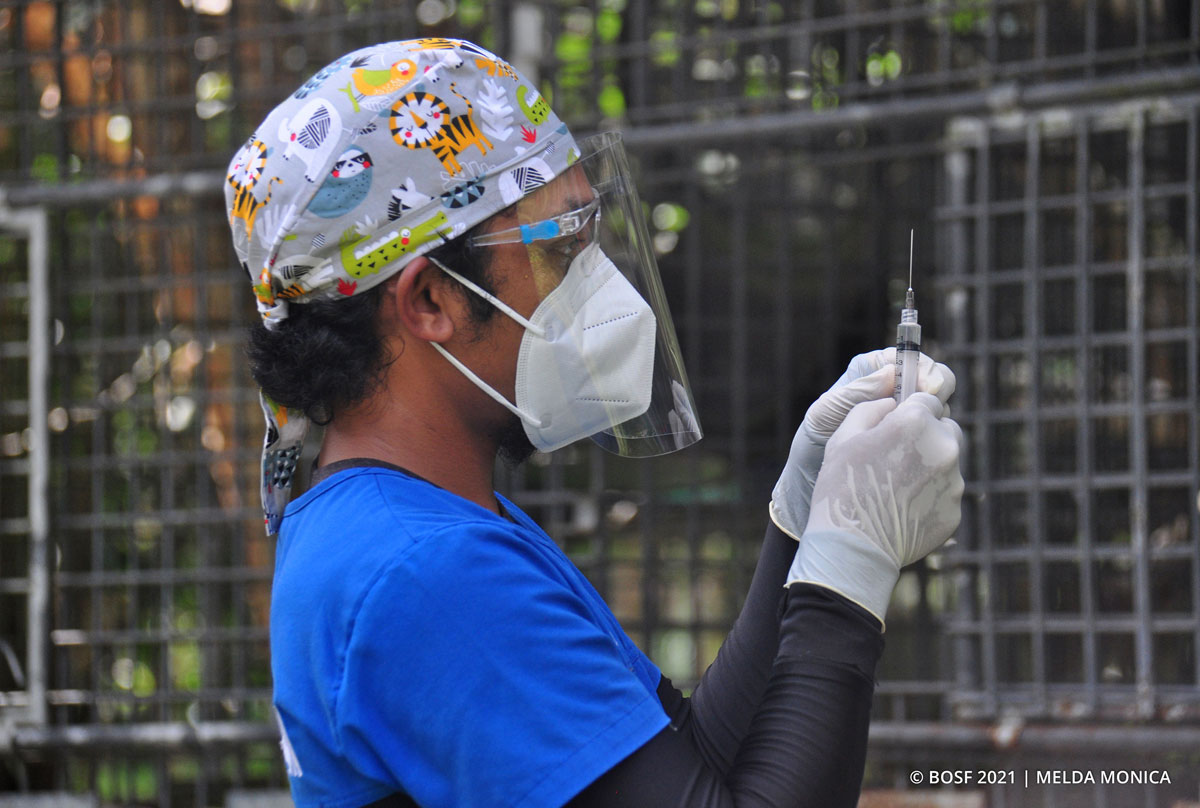 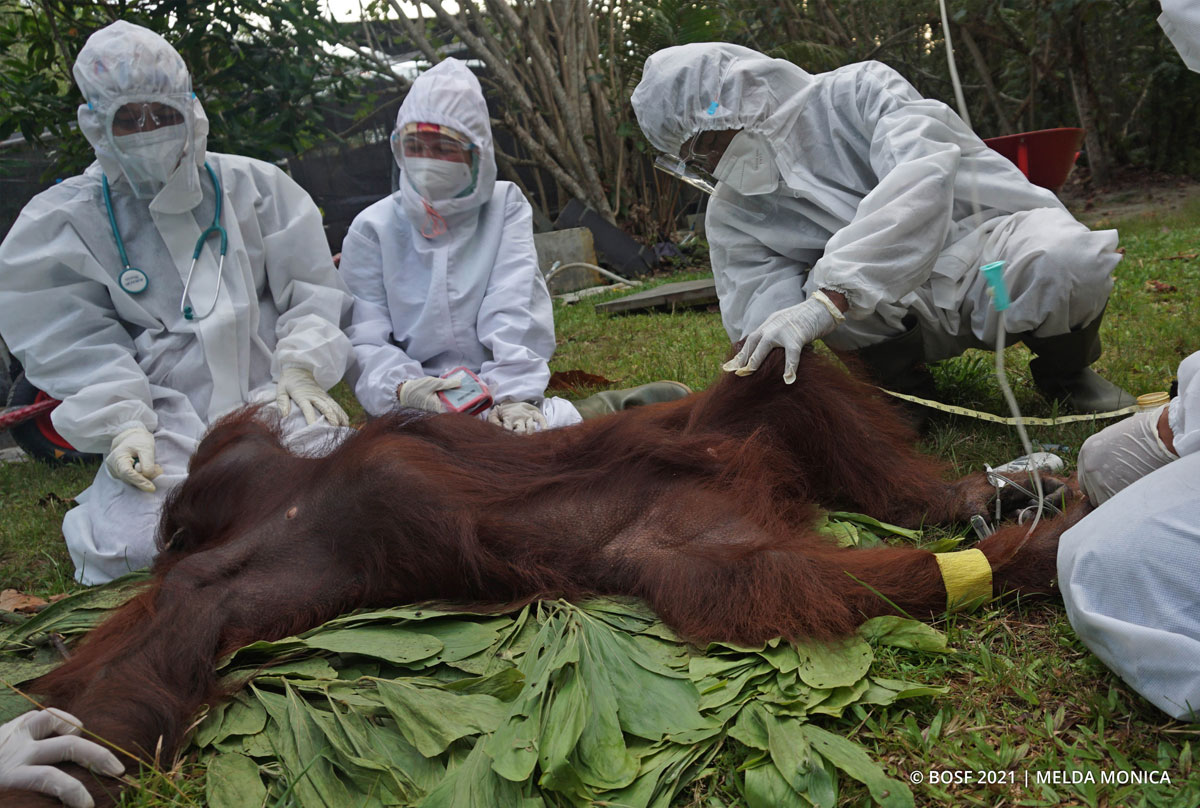 The seven orangutans were transported overnight by pickup trucks from the Nyaru Menteng Orangutan Rehabilitation Centre to the Sangkalemu Airport in Kuala Kurun, the capital of Gunung Mas Regency, Central Kalimantan. The 180-kilometre journey took many hours, with the team stopping every two hours to check in on the orangutans.

The next morning, at Kuala Kurun Airport, a helicopter from Hevilift was ready to transport the orangutans directly to Camp Totat Jalu, in the heart of the Bukit Batikap Protection Forest. After being airborne for about one hour, the helicopter carrying the orangutans had reached its target, 133 km away. 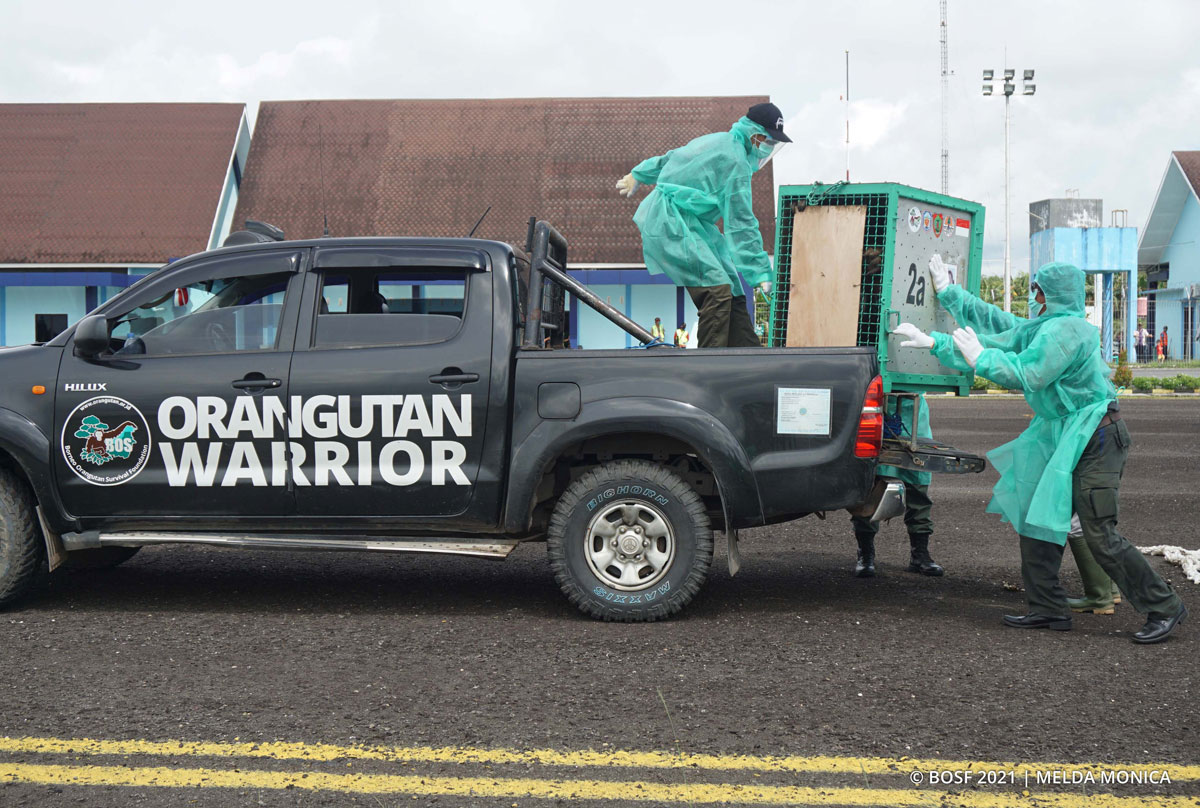 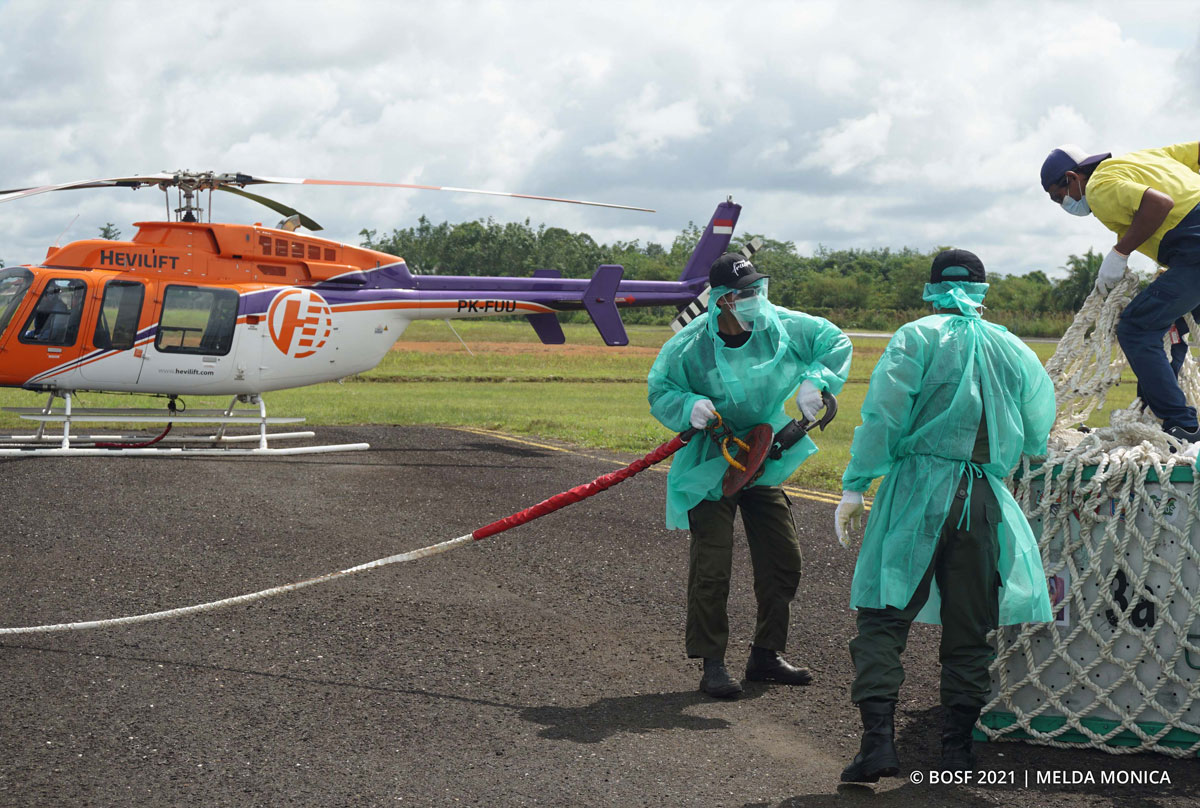 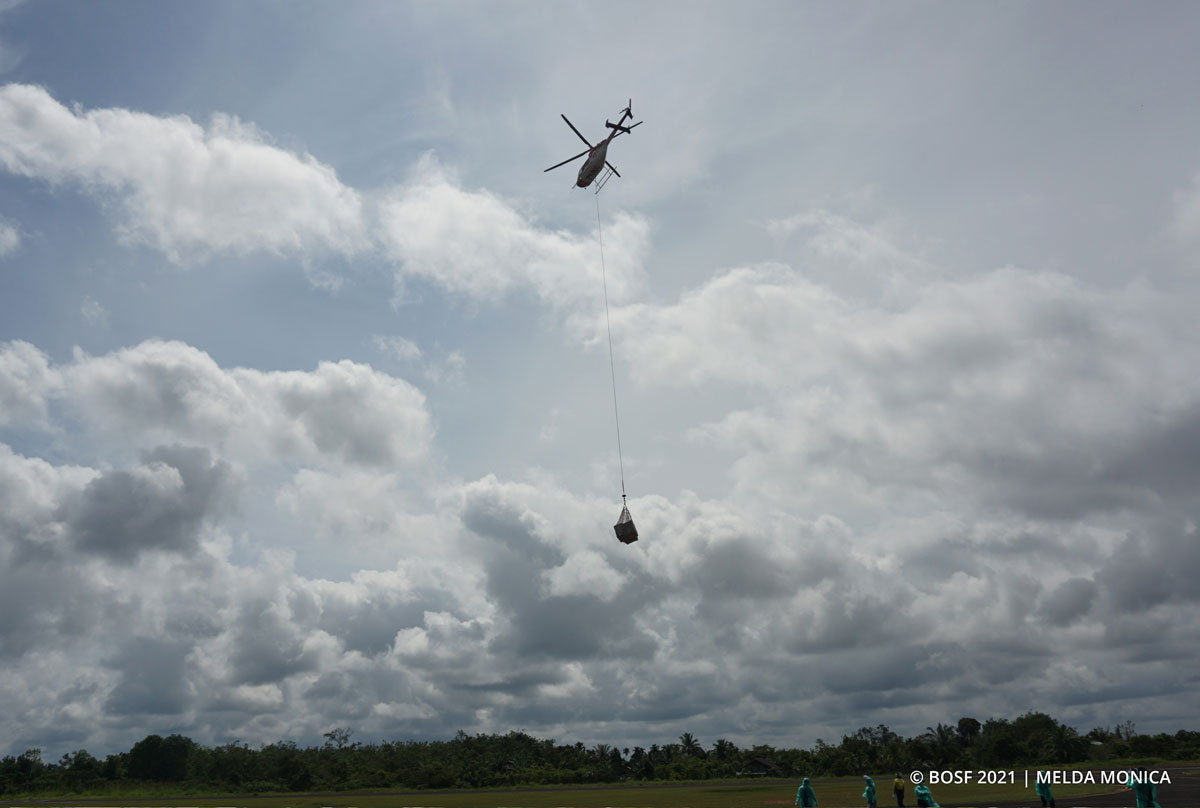 On Tuesday, 16 February, at around noon, the seven orangutans were successfully set down on the helipad behind Totat Jalu Camp, in the Bukit Batikap Protection Forest. The helicopter made two round trips to transport the seven orangutans. From the helipad behind the camp, the release team took the orangutans by boat to their designated release points so they could immediately enjoy freedom in their new home. 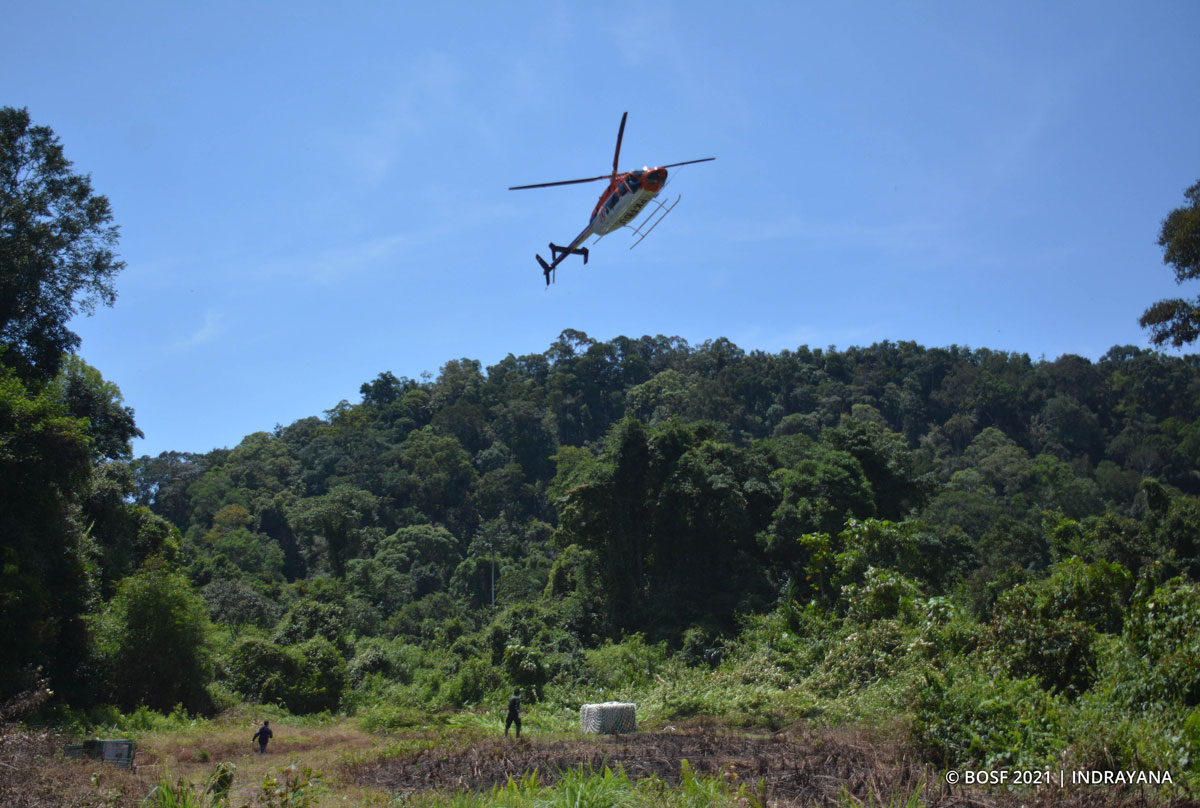 Transport cages unhooked from the helicopter 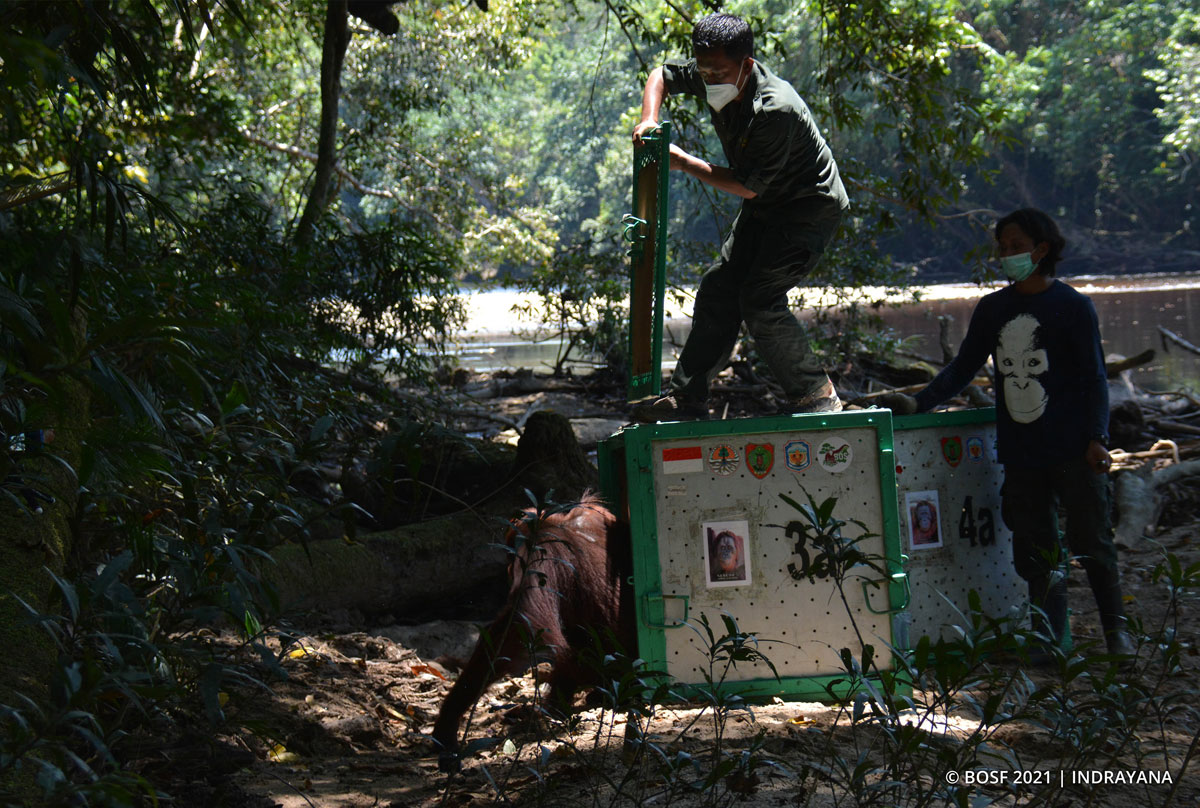 After the release in the Bukit Batikap Protection Forest was completed, the following day the same helicopter flew to Juq Kehje Swen, a pre-release island located in Muara Wahau District, East Kalimantan. There, the helicopter provided support for the second release, involving three adult orangutans: two males and one female, brought from the Samboja Lestari Orangutan Rehabilitation Centre by car the day prior. 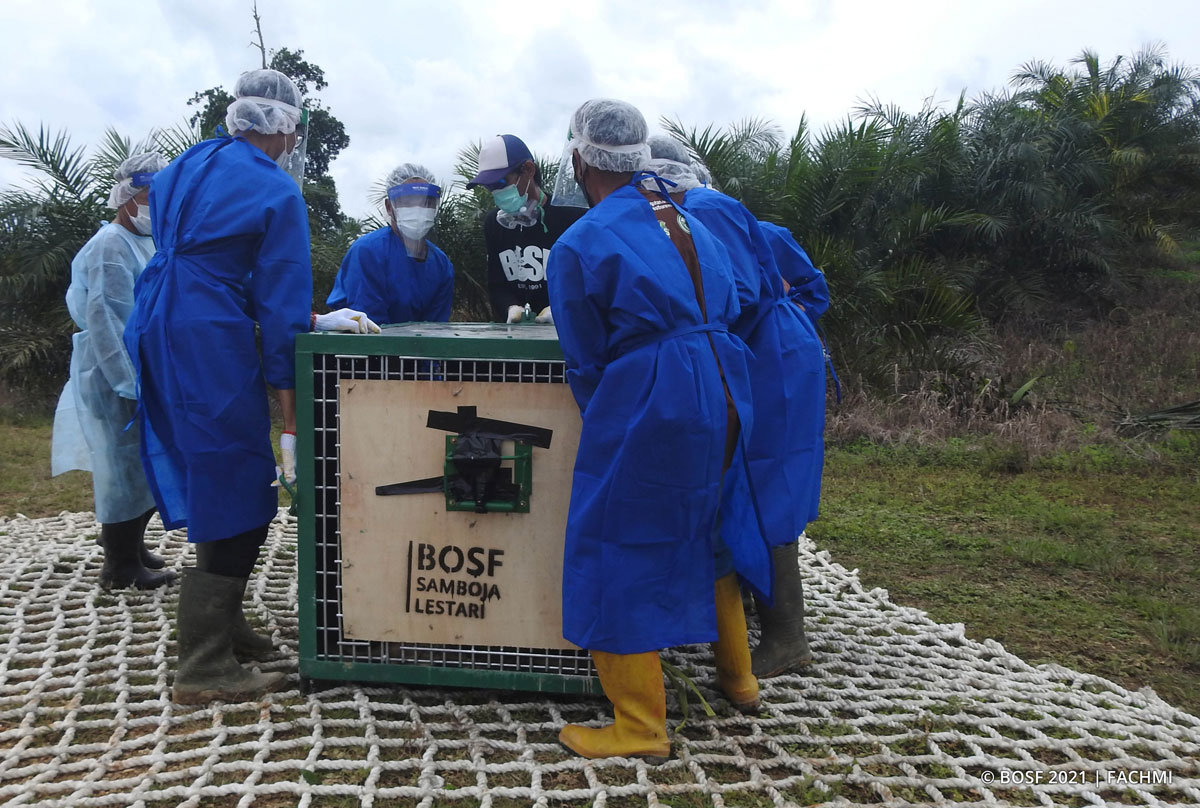 On Thursday, 18 February, the journey for the three orangutans from Samboja Lestari entered its final stage. Following the arrival of the group at Juq Kehje Swen, early that morning, the final leg of travel to the forest was ready to commence but had to be delayed due to thick cloud cover in the area. It was around 2 p.m. local time, when the weather had finally improved. The team immediately flew Juve, Freet, and Britney to the drop point on the northern side of the Kehje Sewen Forest, where the three transport cages would be opened simultaneously at their respective release points. The journey, which usually takes more than 24 hours by car, took only 30 minutes by air! 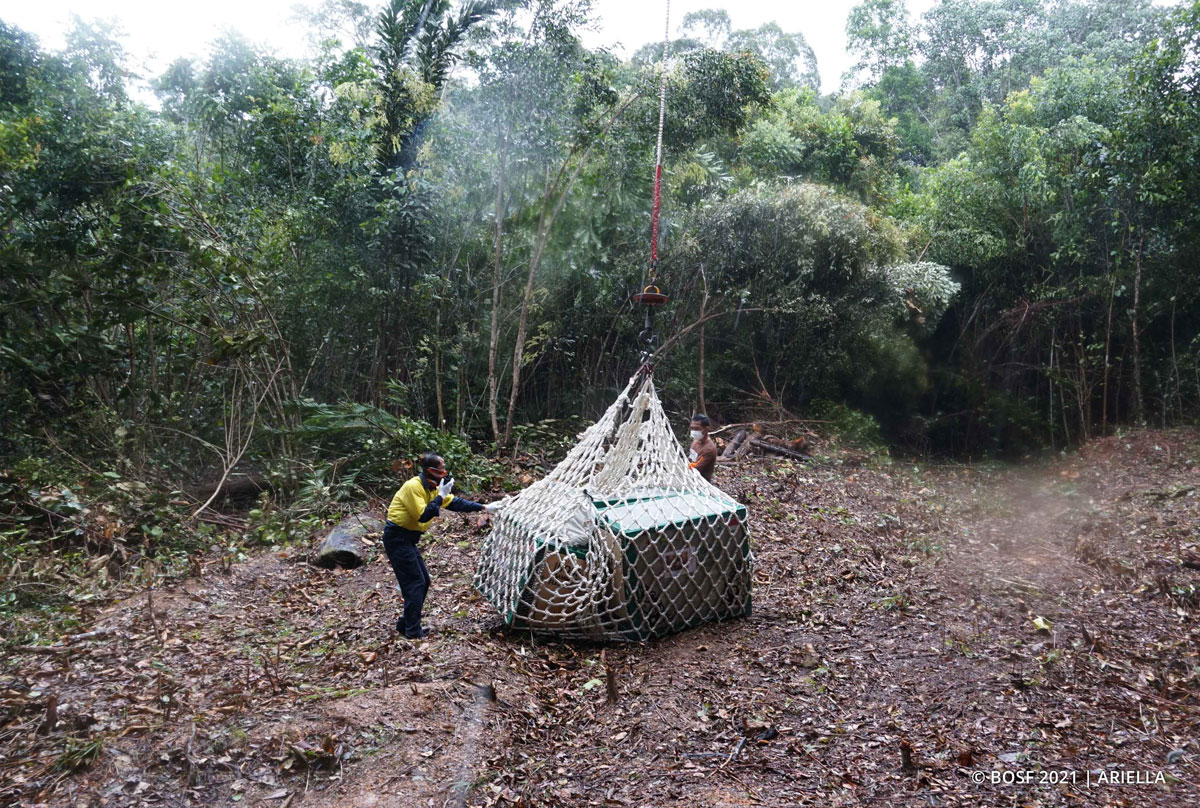 The ten orangutans, most of whom had undergone a lengthy rehabilitation, were successfully released in the forest to enjoy true freedom. With their confidence and foraging abilities, we are certain they will enjoy living and exploring their new homes in the wild.

As the helicopter flew away with a dissipating roar and empty transport cages swinging on the sling underneath, the team was filled with emotion. The struggle to rehabilitate these ten orangutans and finally return them to the forest was over. It would now be up to the post-release monitoring teams to collect observation data on these released orangutans and conduct regular patrols to ensure their safety and well-being in the forest.

With the ten orangutans successfully released, members of the release team can now turn their focus to the next group of release candidates at the BOS Foundation’s rehabilitation centres.

We can’t wait to release more orangutans in the forest this year!