January/February 2016 - Loss of habitat and hunting continue to pose a major threat to the survival of orangutans in Indonesia. Just recently, a joint rescue team from Central Kalimantan BKSDA and BOS Foundation programs – Mawas Conservation Program and Nyaru Menteng – succeeded in rescuing and translocating wild orangutans to a safer forest area within the Mawas Conservation Area.

However, some of these orangutans were found badly injured or already dead.

On Saturday, 16 January 2016, the BOS team was surveying the banks of the Mangkutub river when they were devasted to find the body of an orangutan, face down in the river. 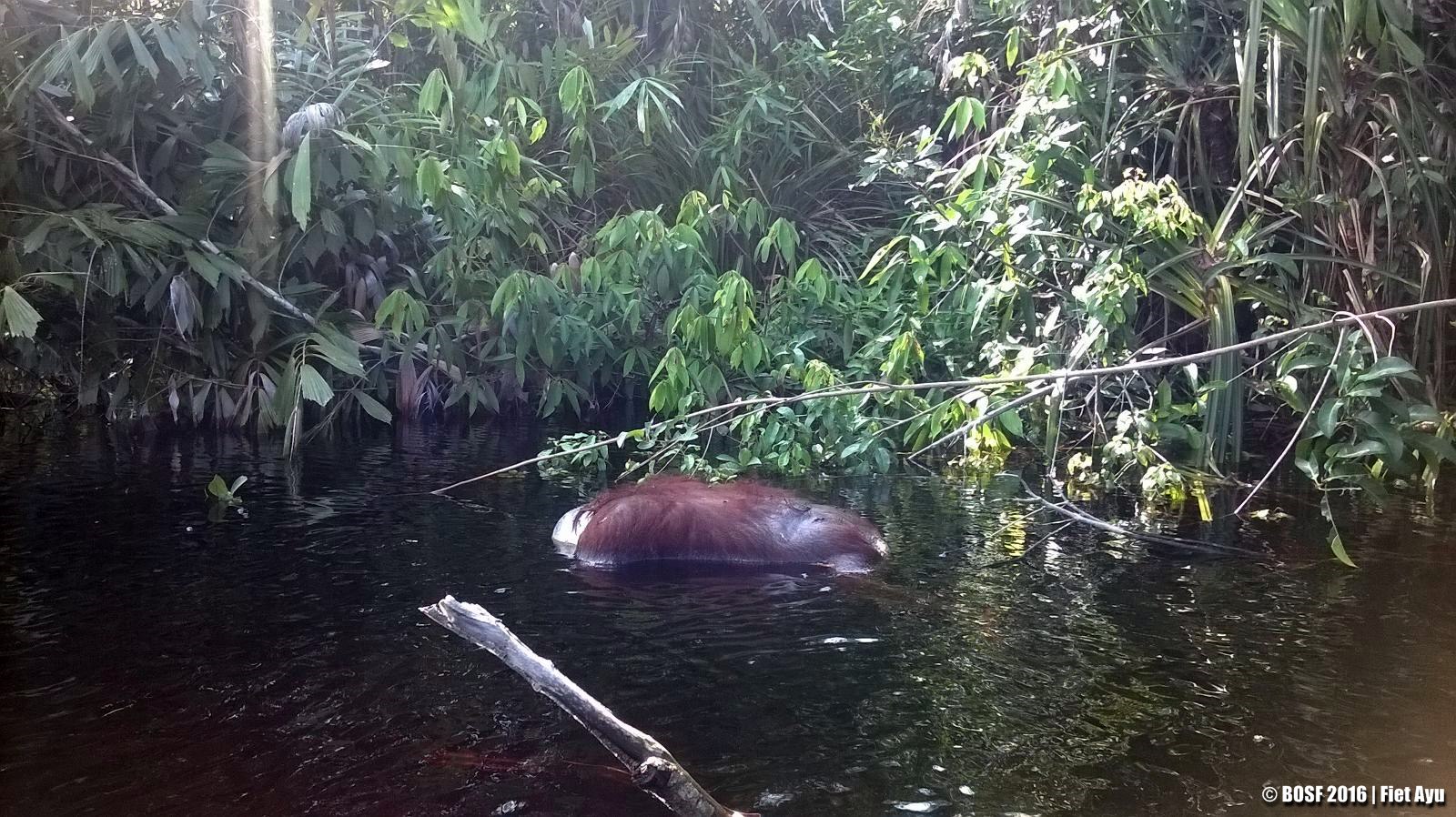 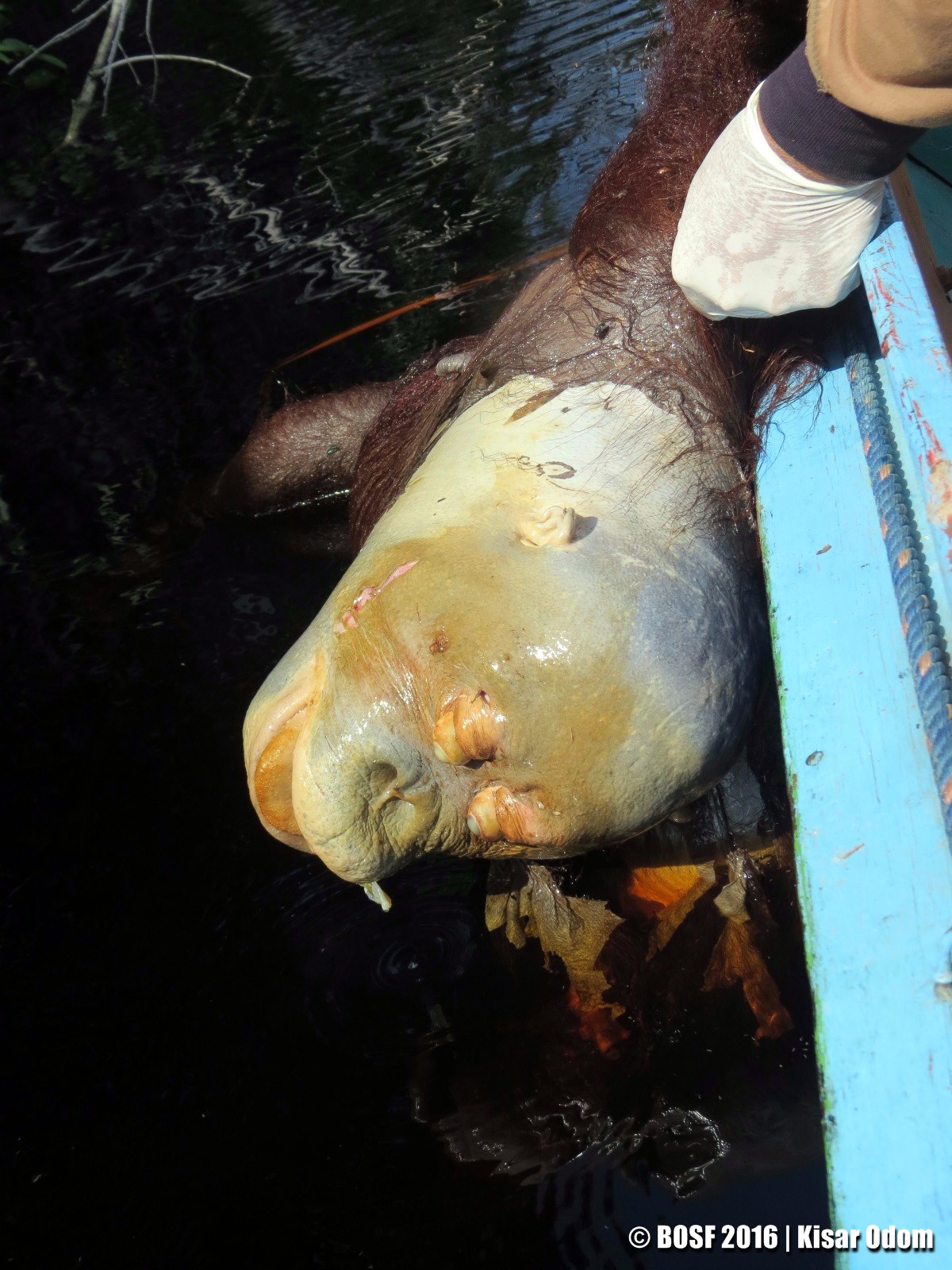 The team quickly moved the orangutan to shore and conducted an initial examination. Our two vets from Nyaru Menteng, Fiet Hayu and Maryos Tandang, reported that the female orangutan was about 15 years old and had a small puncture wound on the left side of her chest and a 10-centimeter cut near the back of her hip. Initially we suspected that the orangutan had died from a gun shot wound.

The team transported the female to Nyaru Menteng for a full autopsy and further analysis to determine the cause of death. Results identified that the 10-centimeter cut to the females hip was 0.5 cm deep and she had also sustained another wound to her face. The puncture wound on the lefthand side of her chest, initially suspected to be a gunshot wound, was more likely caused by a spear or tiruk (one eyed spear used for fishing) which pierced through her heart. No trace of gun shots, neither pellets or bullets were found in her body. They estimated that she had died 3 to 5 days previously.

Together with the discovery of this female and in January alone, we found and rescued 5 other wild orangutans alive, but with gun shot wounds and other injuries such as fractured fingers, hands, legs or ribs. 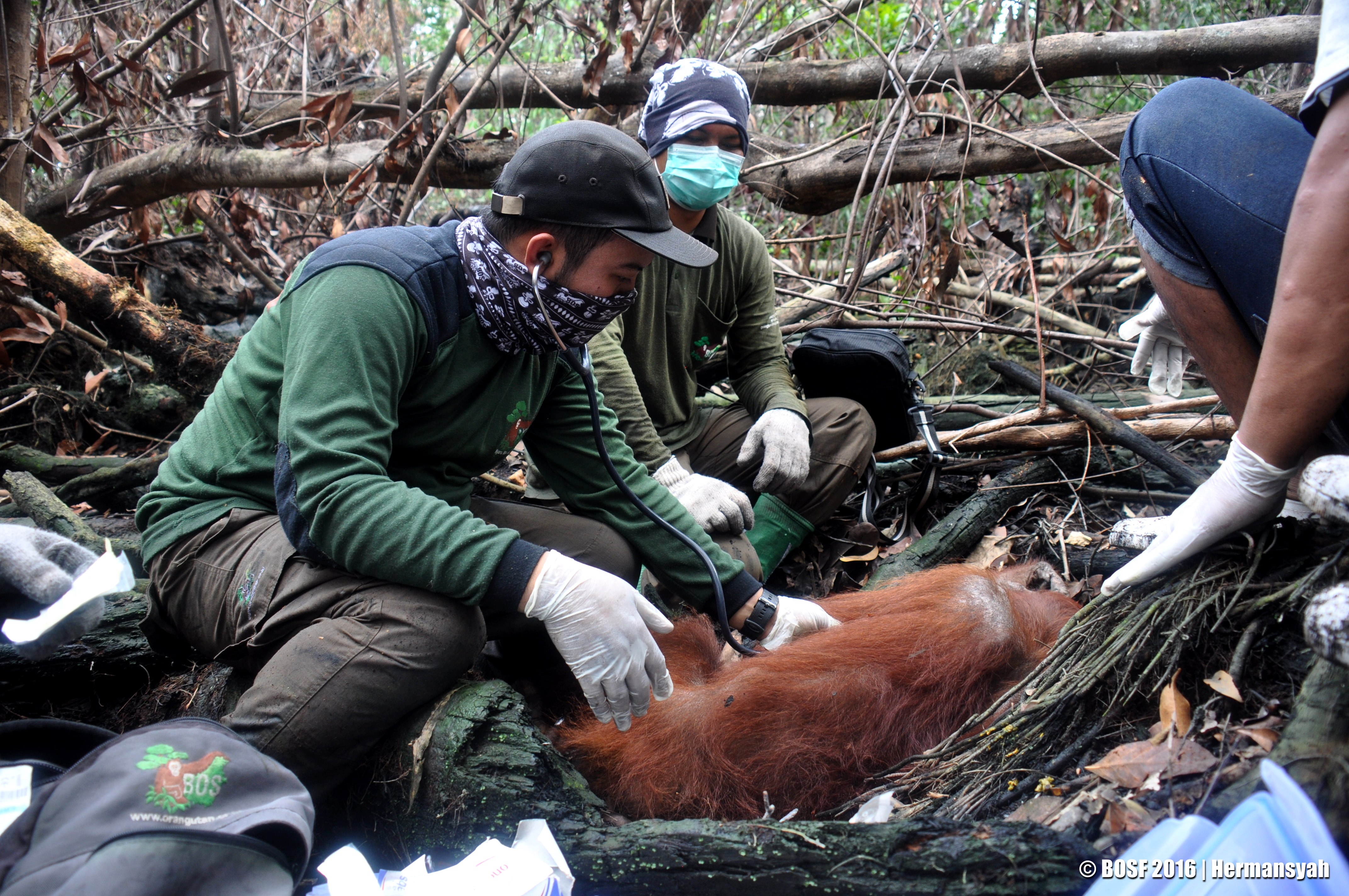 An Orangutan Badly Injured, with 13 Pellets Found in his Body

On Friday 8 January 2016, the same team located a seriously injured adult male orangutan, estimated to be 12 years old, also near the banks of Mangkutub River, Kapuas Regency, Central Kalimantan. Veterinarians Fiet and Maryos found he was suffering from a number of gun shot/pellet wounds, both his eyelids swollen shut, his right eye bleeding and a fractured and bleeding nose. Named Grepy, we took him to our clinic at Nyaru Menteng for further examination and treatment. 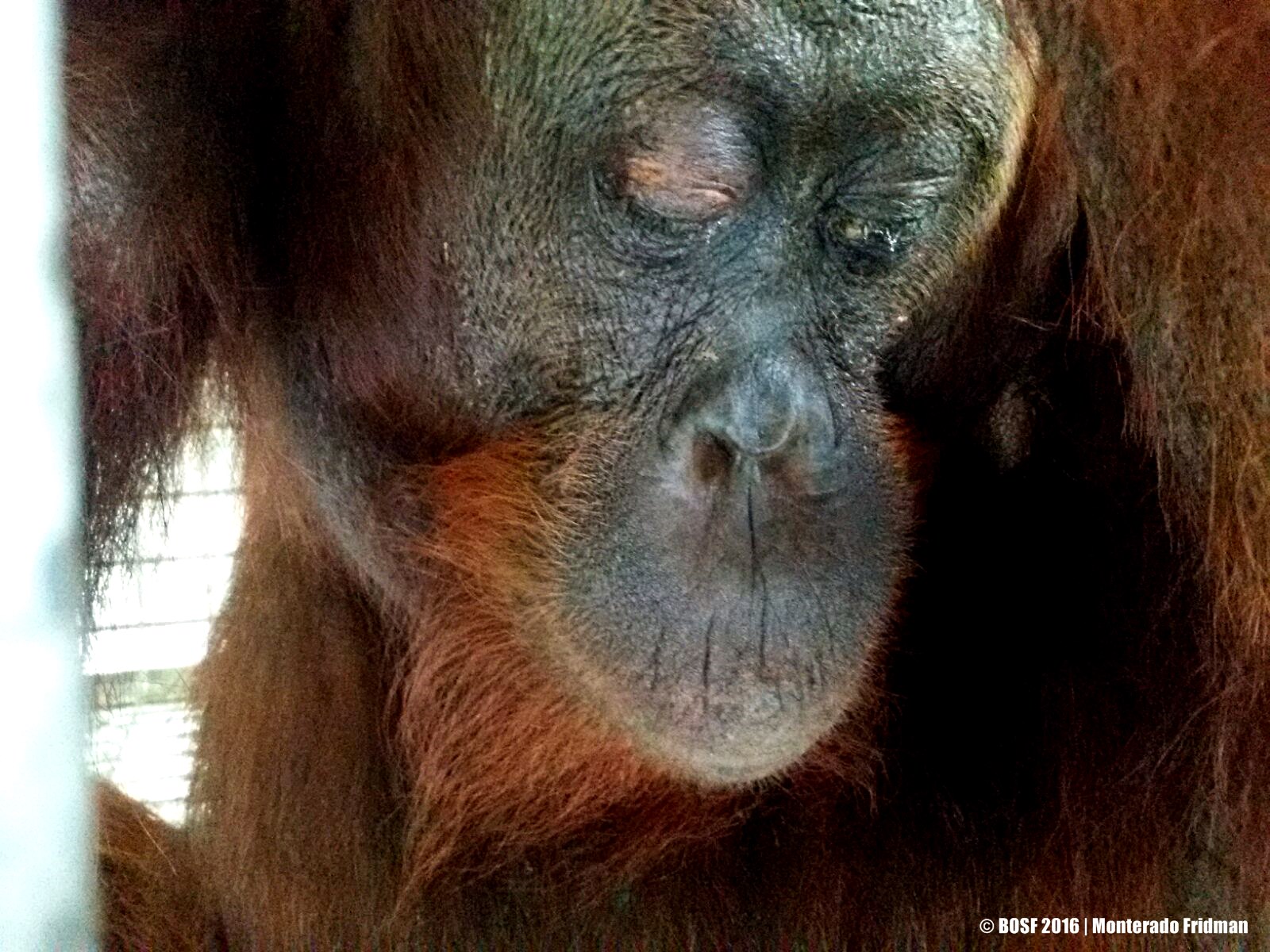 X-rays revealed that there were thirteen 4.5-mm calibre air-rifle pellets buried in his body. Eight in his torso area, and 5 in other parts of his body. USG scans to his skull showed blood clots behind both of his eyes. We suspect there may be other pellets lodged in the back of his eye socket, however, limited x-ray equipment makes it difficult to confirm. Sadly, if this is the case, this condition will lead to a total loss of vision.

We also found that parts of his face and temple area were swollen, suspected to have been caused by the impact of a blow from a blunt object. After a thorough examination, we have so far only been able to safely remove one pellet. 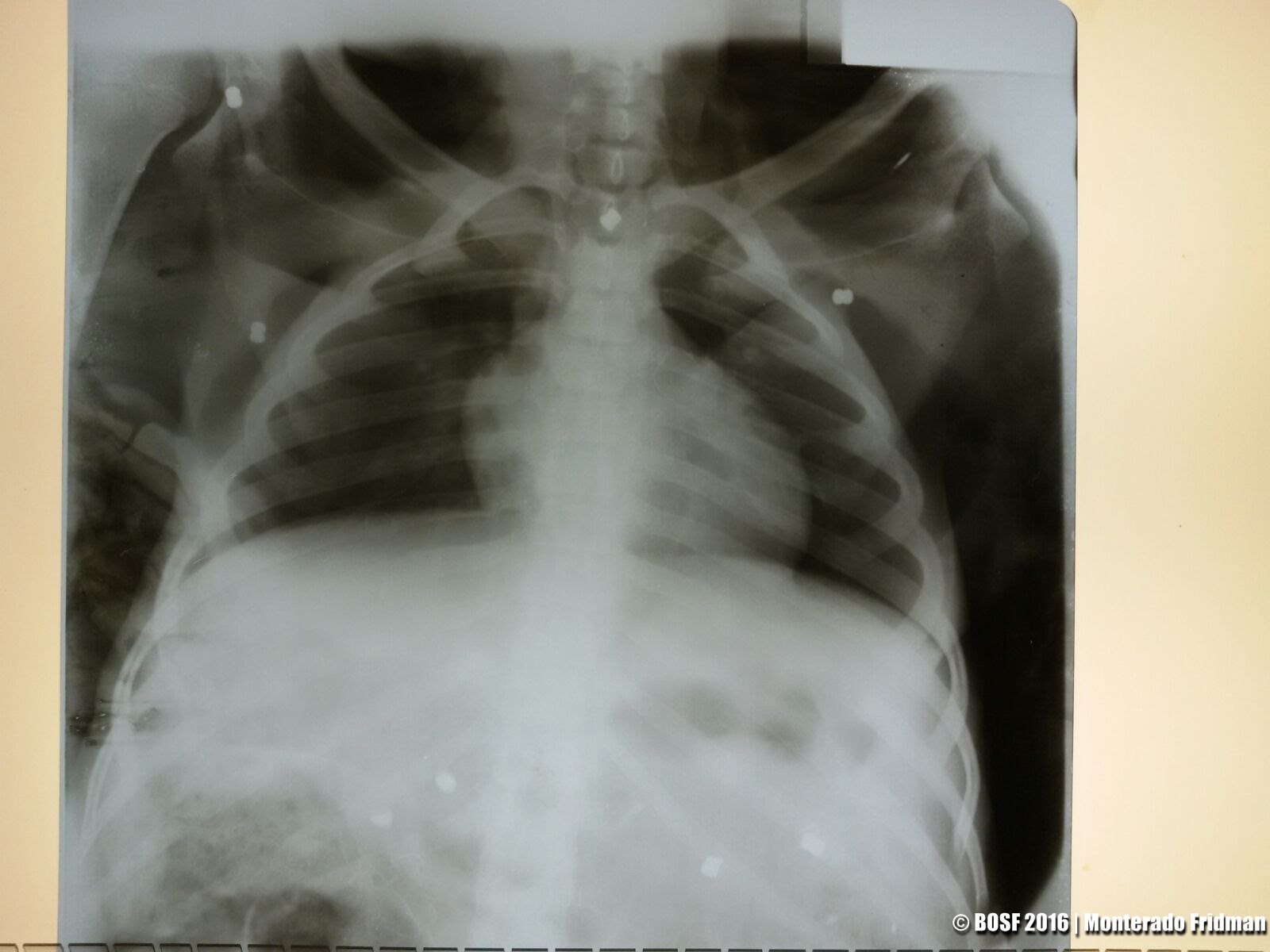 Our Vet Coordinator, Agus Fahroni reported that the team have decided against surgery at this time as they believe it may worsen the situation rather than improve it. As long as Grepy is still able to move freely, the pellets do not appear to pose an immediate threat to him. Based on previous similar cases, the medical team cautiously estimate that the projectiles should naturally be pushed to the surface of the skin and can then be safely removed.

Our medical team continue to monitor Grepy’s progress. In terms of visibility, when they offer him fruit and drinks, he is unable to see them. He only responds when we touch his hands with the fruit. Grepy moves around his enclosure through stretching out his hands and trying to identify his surroundings through touch. Everyday our medical team continues to provide Grepy with intensive care with the hope that eventually he may regain his visibility, meaning that we can reintroduce him back to the wild. If he does not recover his vision, he will sadly have to remain under our care for the rest of his life.

This rescue and translocation mission is the second operation conducted by the BOS Foundation and Central Kalimantan BKSDA in the last 2 months. The same joint team launched a similar 10 day rescue mission (27 November to 7 December 2015) in the same area and managed to rescue and translocate 39 wild orangutans. 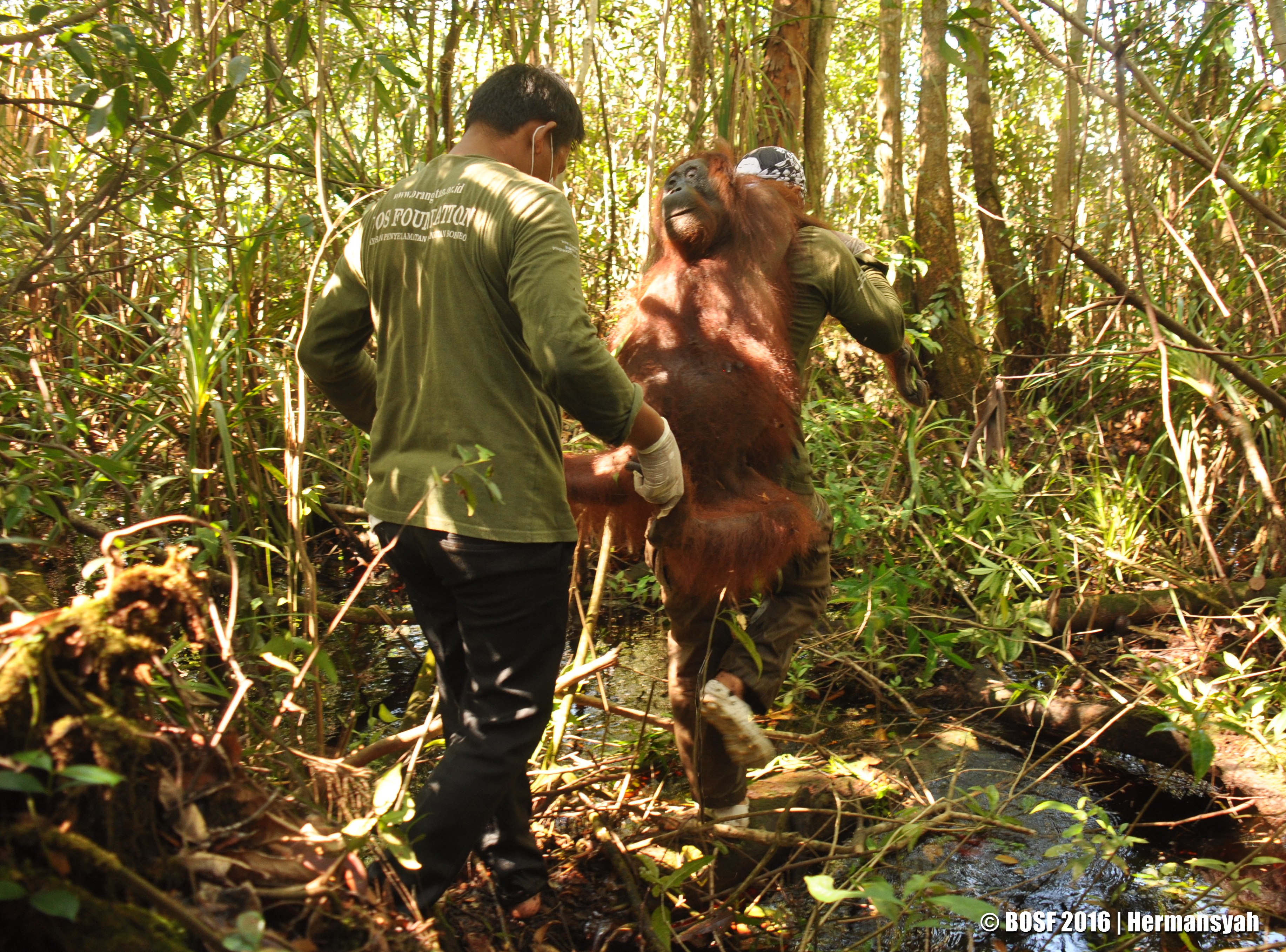 “This clearly shows that wild orangutans, especially in the Mawas Conservation area are currently facing a critical life and death situation and are immediately threatened by human actions. This is a conservation forest and they are a legally protected Endangered species. There must be serious legal actions taken to solve this conflict between orangutan and humans” said BOSF’s CEO, Dr. Ir. Jamartin Sihite.

Dr. Sihite also stressed that orangutans certainly will face local extirpations and extinction if we do not immediately take actions to ensure their preservation and conservation. Despite the fact that orangutans are protected on paper by Law No. 5 (1990) and Government Regulation No. 7 (1999), there is no specific law protecting the forest, or orangutan habitat and very few people have ever been successfully prosecuted for the unlawful killing of orangutans. If we keep neglecting the importance of forest protection and the laws protecting the orangutans themselves, we simply push orangutans closer to extinction.

To mark BOS Foundation’s 25 anniversary, we ask everyone to act in voicing the importance of preserving and conserving orangutans and the forest. We all have something the orangutans do not, which is a voice and the freedom to use it. If everyone uses their voice to support orangutan conservation and stop the killing of orangutans, we can make a difference to their future survival.