December 4, 2018 — The BOS Foundation’s Nyaru Menteng Orangutan Rescue and Rehabilitation Center will soon return 6 more orangutans to the natural forests of the TNBBBR, Katingan District, Central Kalimantan. This release will bring the total population of rehabilitated orangutans reintroduced to the ​​TNBBBR to 108, since the first release to this National Park in August 2016.

The six orangutans to be released include two males and four females ranging in age from 13-17 years old. They will embark on a 10-12-hour journey over land and via river from Nyaru Menteng to predetermined release points in the TNBBBR. 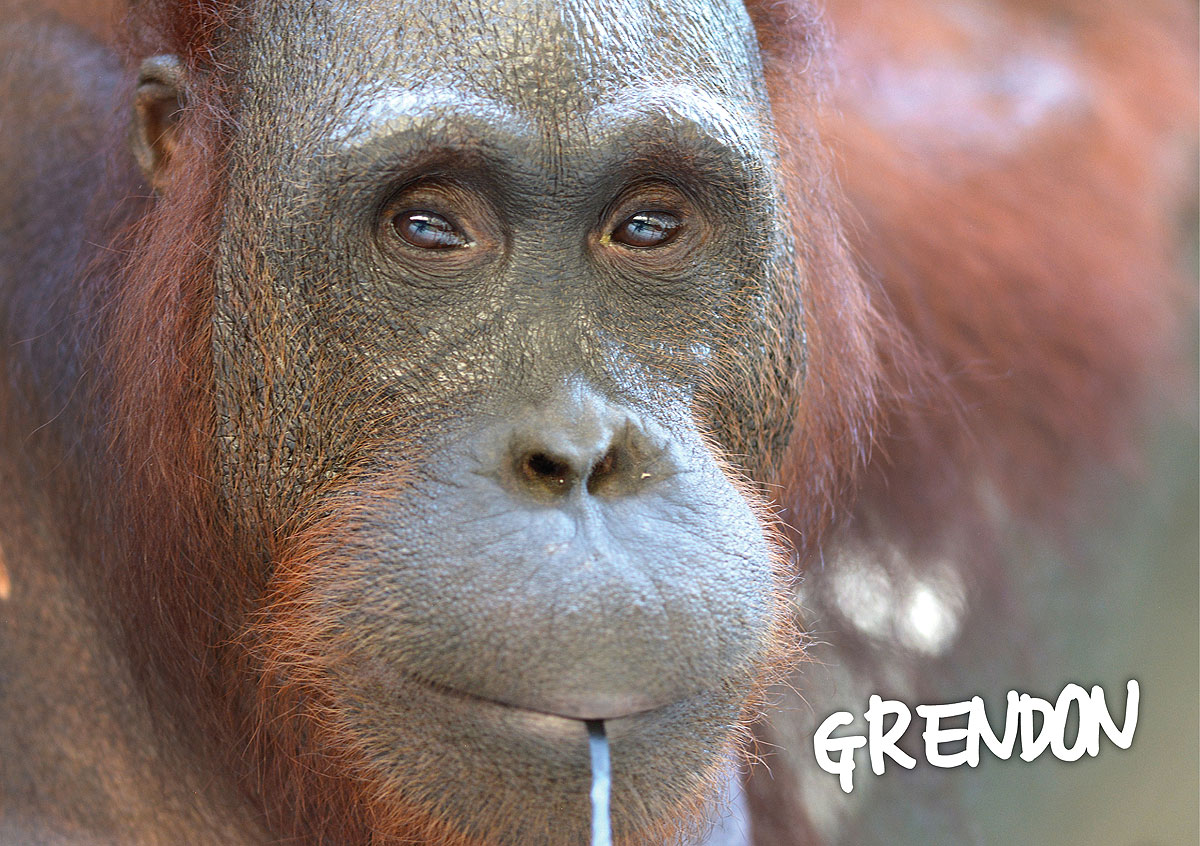 Many of you may remember Grendon from more than ten years ago when he was one of the stars of Orangutan Diary. He was also among the first group of orangutans to be featured in the Orangutan Outreach online adoption program. (The others were Lomon, who has already been released; Fio, who will be released soon; and Kesi, who is currently starring in Orangutan Jungle School and will also hopefully be released in the near future.)

Grendon was rescued on 15 April, 2006, through a joint effort involving teams from both the BOS Foundation’s Nyaru Menteng Orangutan Rehabilitation Centre and the Central Kalimantan Natural Resources Conservation Agency (BKSDA). He had been kept illegally by a resident of Palangka Raya. Grendon arrived at Nyaru Menteng when he was two years old and weighed 6.4 kilograms.

Following a period of quarantine, Grendon joined Forest School and progressed nicely through all stages. On April 13, 2017, he began the pre-release stage of rehabilitation on Kaja Island, where he grew to become an independent orangutan with exceptional foraging skills. While not a dominant figure, Grendon was still able to defend himself when required, and became one of the best explorers known to roam the island.

Grendon is now 14 years old and weighs 36.4 kilograms. After 12 years of rehabilitation, he is now ready to explore his new home in the Bukit Baka Raya National Park as a true, wild orangutan. 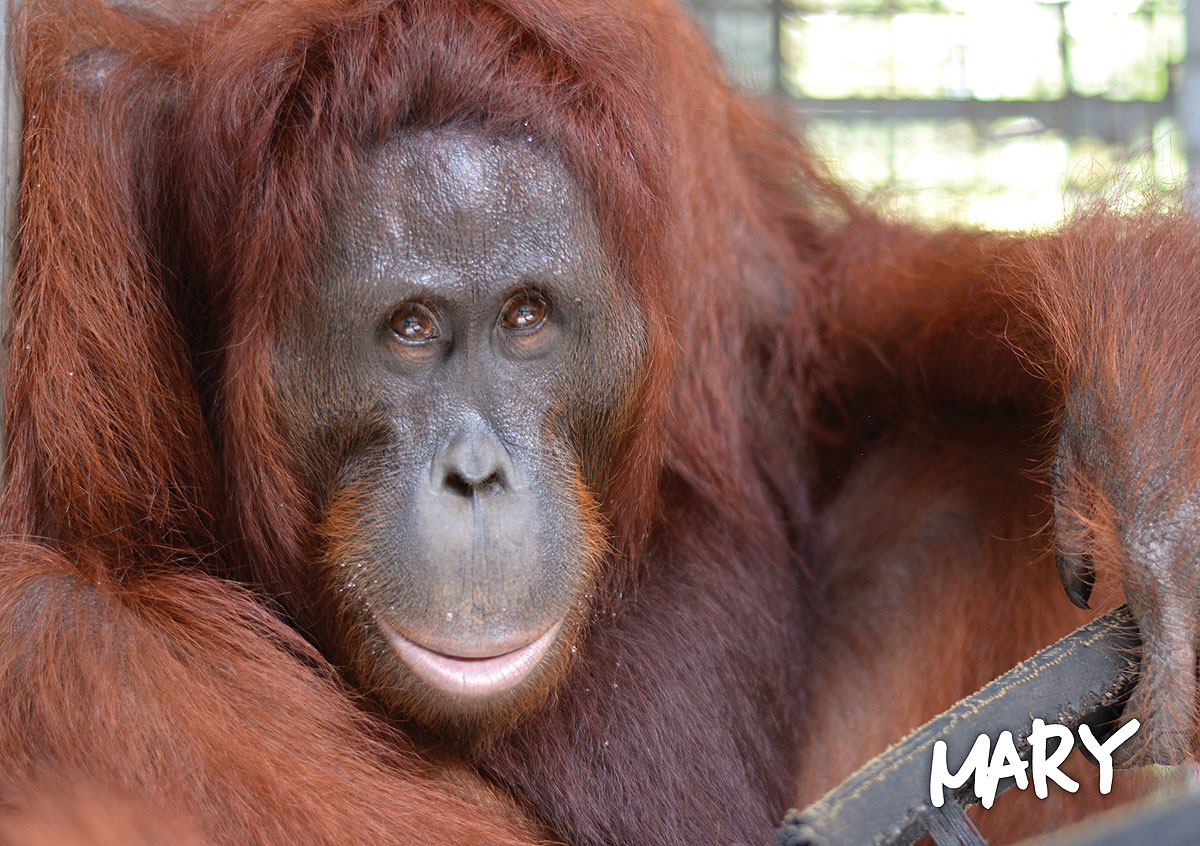 Mary was rescued on 28 March, 2003, from a local resident of Ketapang Regency, West Kalimantan, who had been keeping her captive. She came to BOS Foundation’s Nyaru Menteng Orangutan Rehabilitation Centre at the age of two years old, weighing just six kilograms.

Following a period of quarantine, Mary joined Forest School and successfully completed all stages. On 24 June, 2013, she entered the pre-release stage of rehabilitation, and over the years had the experience of living on three different pre-release islands – Kaja Island, Palas Island, and Bangamat Island. Her adventures on the islands have shaped Mary into a highly curious, yet adaptable individual with a firm dislike for human presence.

After 15 years of rehabilitation, Mary is now 17 years old and weighs 31.7 kilograms. This attractive female is more than ready to live in the wilds of the Bukit Baka Bukit Raya National Park Forest. 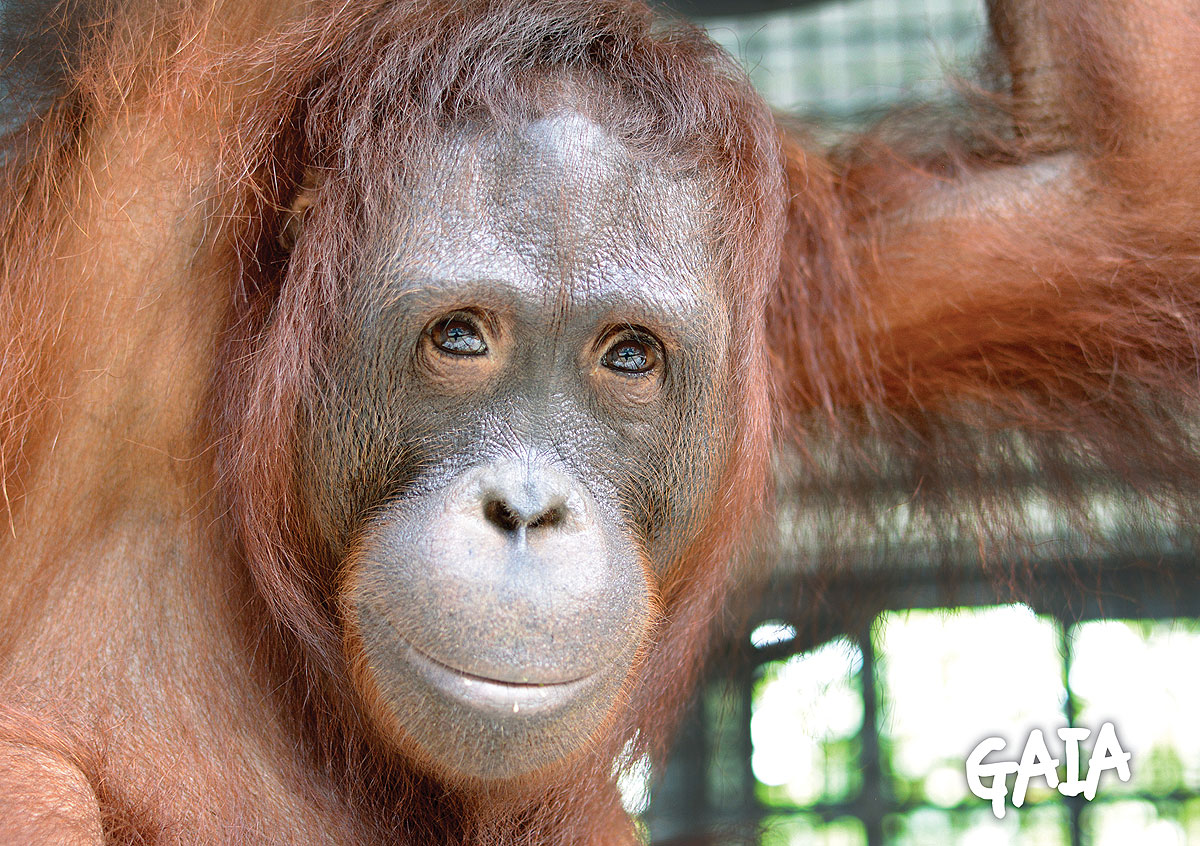 Gaia was rescued from a local resident of Sampit, East Kotawaringin Regency, Central Kalimantan, on 20 December, 2007. She was around two years old at the time and weighed 11 kilograms.

Gaia completed all stages of Forest School and continued on to the pre-release stage on Palas Island on 18 March, 2014. She was relocated to Bangamat Island on 19 April, 2018. Gaia was known as a friendly individual on the island; she avoided conflict with others, yet was capable of defending her ground when necessary.

Gaia is now 13 years old and weighs 33.2 kilograms. After 11 long years of rehabilitation, Gaia is ready to live wild and free in her new home, the Bukit Baka Bukit Raya National Park Forest. 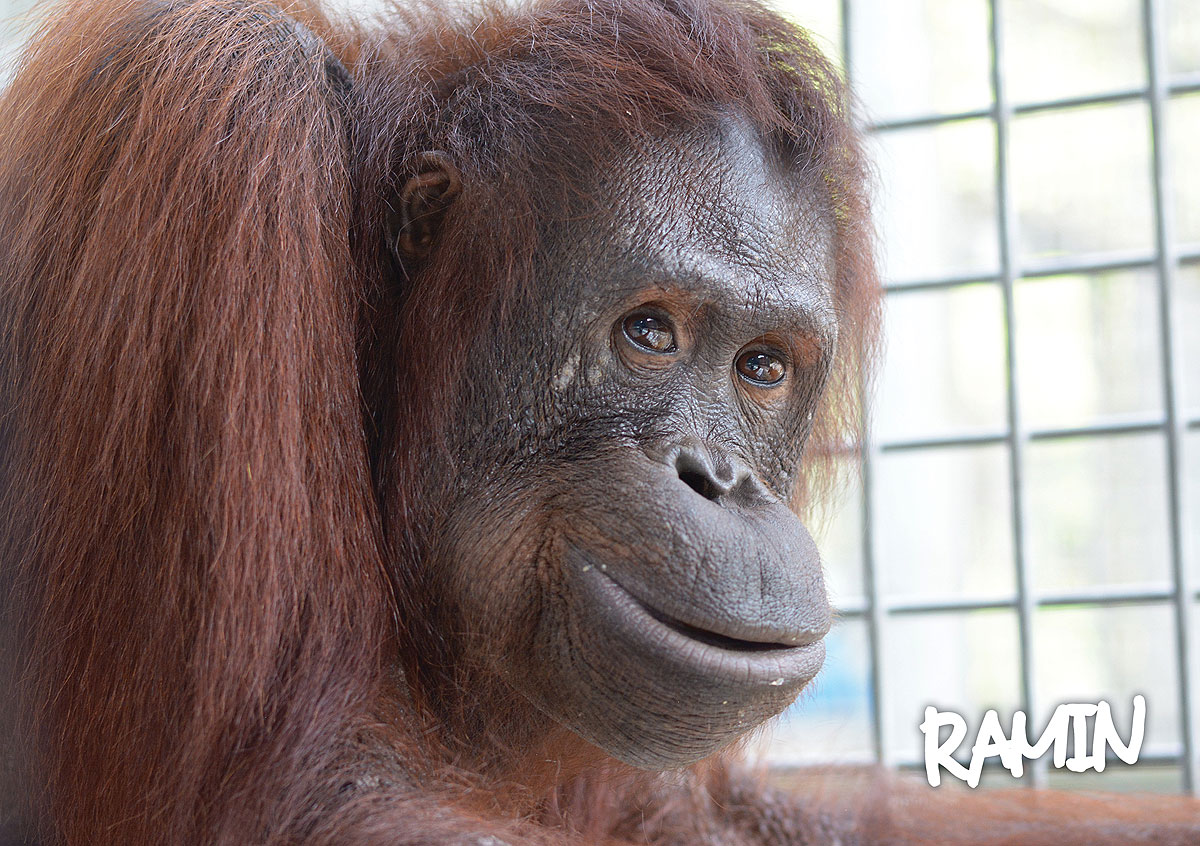 Ramin was rescued from a local villager in Tangkiling, Palangka Raya, Central Kalimantan, on 17 December, 2005. The villager claimed to have bought her in West Kalimantan. When she arrived at Nyaru Menteng, Ramin was just two years old and weighed a measly 2.7 kilograms.

Ramin finished Forest School and continued to the pre-release stage on Kaja Island, on 18 April, 2017. She loved to travel all over the island and remained alert to the potential dangers and threats around her. Ramin enjoys interacting with other orangutans, but firmly dislikes humans.

Ramin is now 15 years old and weighs 30 kilograms. After 13 years of rehabilitation, Ramin is ready to put all her survival skills to the ultimate test in the forests of the Bukit Baka Bukit Raya National Park. 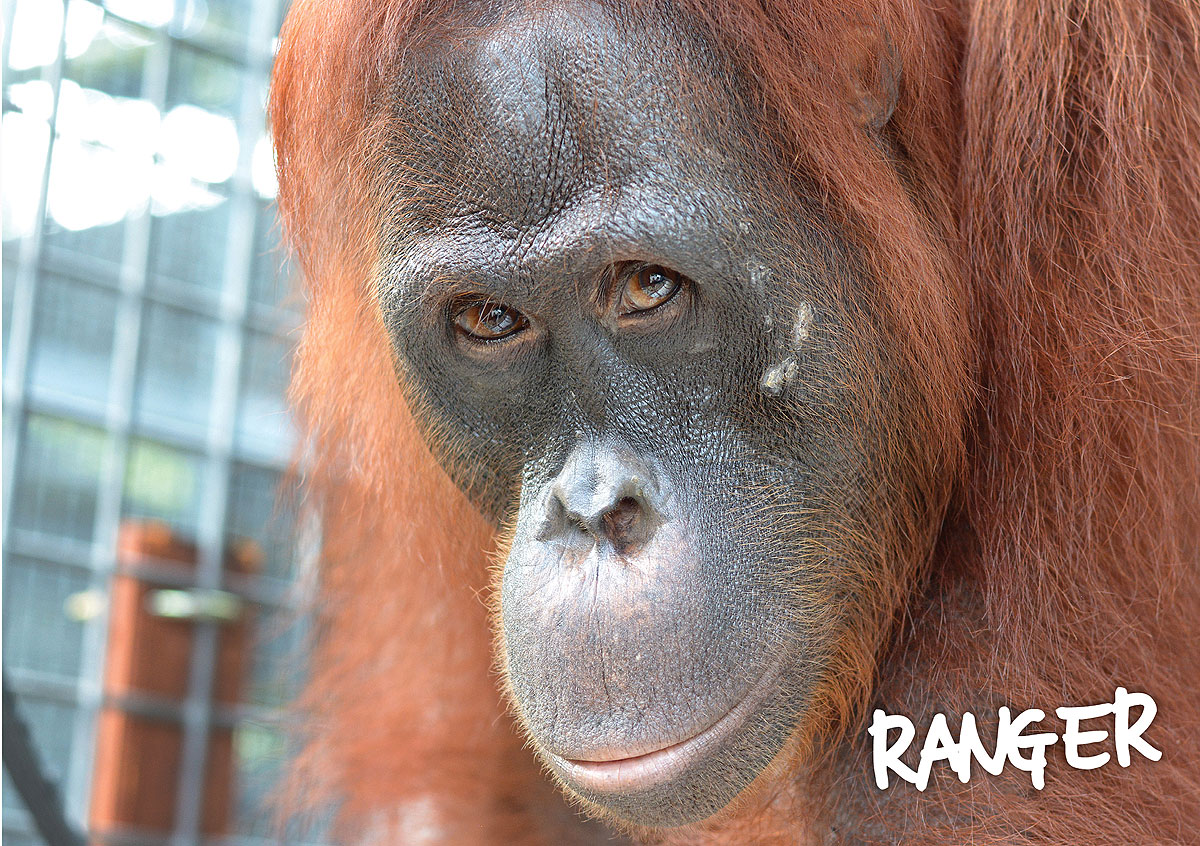 Ranger was rescued from a villager of Danau Sembuluh, East Kotawaringin Regency, Central Kalimantan, on 17 April, 2003. When she came to Nyaru Menteng Orangutan Rehabilitation Centre, she was 12 months old and weighed four kilograms.

After passing quarantine, Ranger joined Forest School and completed all levels. She was moved to the pre-release island, Kaja Island, on 13 April, 2017. Highly-alert, Ranger is great at socialising with other orangutans, and avoids humans at all costs.

Ranger is now 16 years old, and weighs 35 kilograms. After 15 years of rehabilitation, Ranger is now ready to explore the forests of the Bukit Baka Bukit Raya National Park, where she will live her life as a true, wild orangutan. 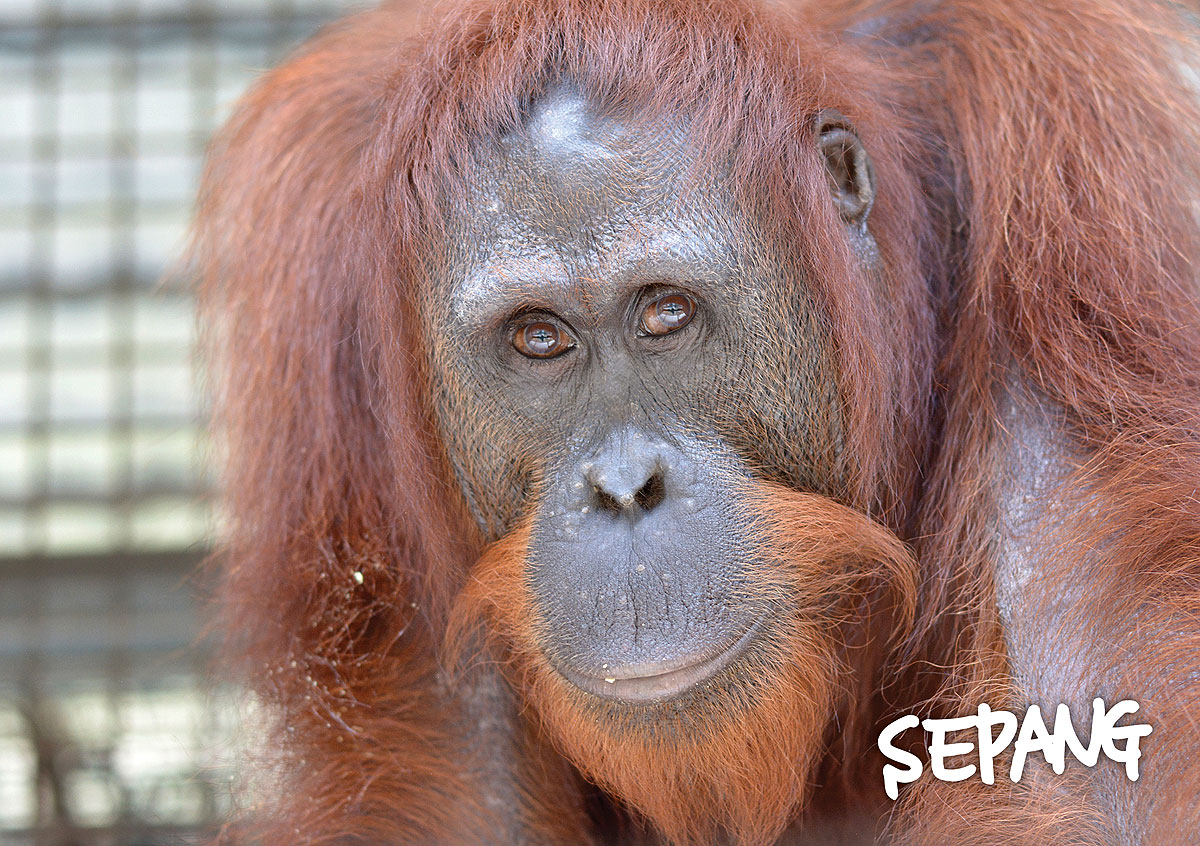 Sepang was rescued by a joint team from the Central Kalimantan BKSDA and BOS Foundation, on 21 October, 2005. He had been held captive by a local resident of Sepang, in Gunung Mas Regency. He was two years old and weighed six kilograms upon his arrival at Nyaru Menteng Orangutan Rehabilitation Centre.

Following an initial period of quarantine, Sepang joined Forest School and successfully completed all levels. On 18 April, 2017, he continued his rehabilitation journey on the pre-release island, Kaja Island. There, he developed into an avid explorer, and a gentle soul who preferred to be by himself.

Sepang is now 15 years old and weighs 35 kilograms. After 13 years of rehabilitation, he is ready to live as a true, wild orangutan in the forests of the Bukit Baka Bukit Raya National Park.