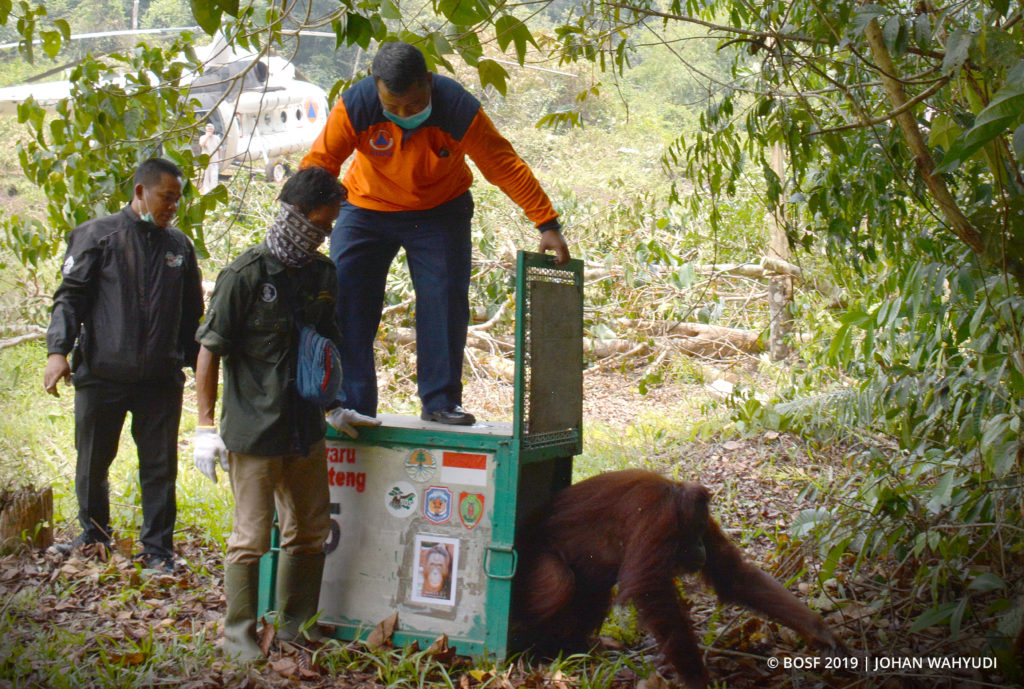 October 17, 2019 — Despite our extensive experience in carrying out orangutan reintroductions, the Borneo Orangutan Survival Foundation (BOS) Foundation knows, all too well, that an orangutan release is no simple operation. These releases can only be carried out successfully with the support of other stakeholders. For the orangutan release this past September, the BOS Foundation and the Central Kalimantan Natural Resources Conservation Agency (BKSDA) received enormous support from the National Board for Disaster Management (BNPB), who generously lent us their helicopter to help transport orangutans to the Bukit Batikap Protection Forest in Murung Raya Regency, Central Kalimantan.

The Bukit Batikap Protection Forest is located deep in the heart of Borneo, a great distance away from the Nyaru Menteng Orangutan Rehabilitation Centre. Using land and river transportation, the release team would have to travel more than 48 hours to reach the release points in the forest. Using air transportation, the trip can be cut down to under an hour.

The 31st orangutan release in Central Kalimantan, began one afternoon with the tranquilizing of the release candidates. Just before the sun finally set, the orangutans were placed in their transport cages and begun their final journey. The group of eight orangutans consisted of 3 males, Kisar, Martizen, and Sampurna, accompanied by 5 females, Holly, Mocacino, Siti, Sisi, and Rawang. 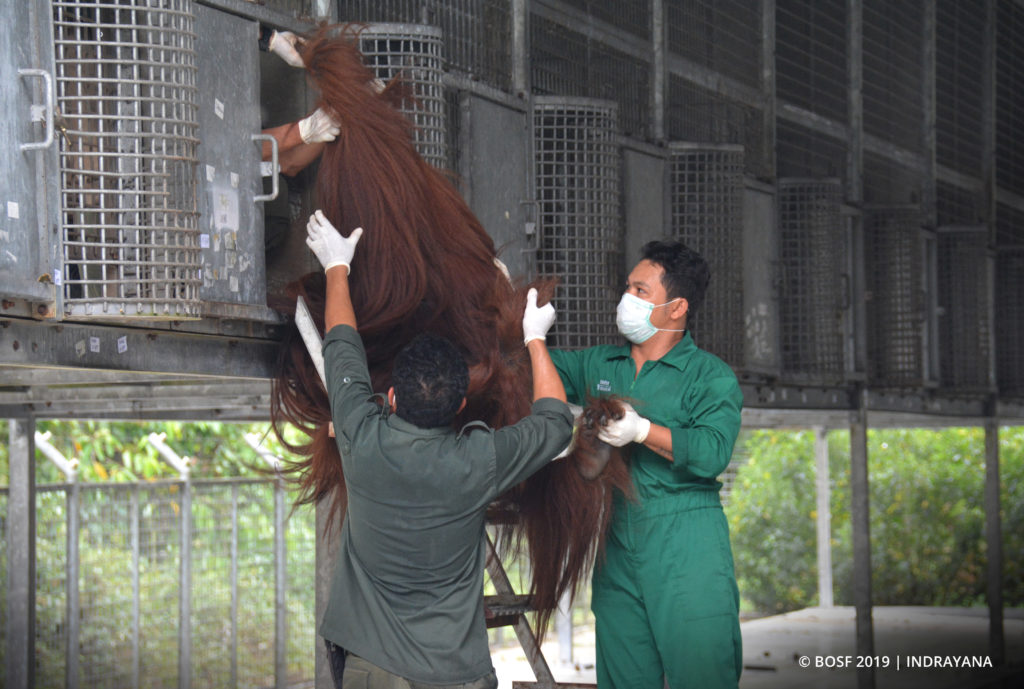 The eight cages were transported by 3 pickup trucks belonging to the Nyaru Menteng Rehabilitation Centre and brought directly to Sangkalemu Airport in Kuala Kurun, the capital of Gunung Mas Regency, Central Kalimantan. The 5-hour long, 180 kilometre journey flew by as the team took breaks every 2 hours to check on the condition of the orangutans. 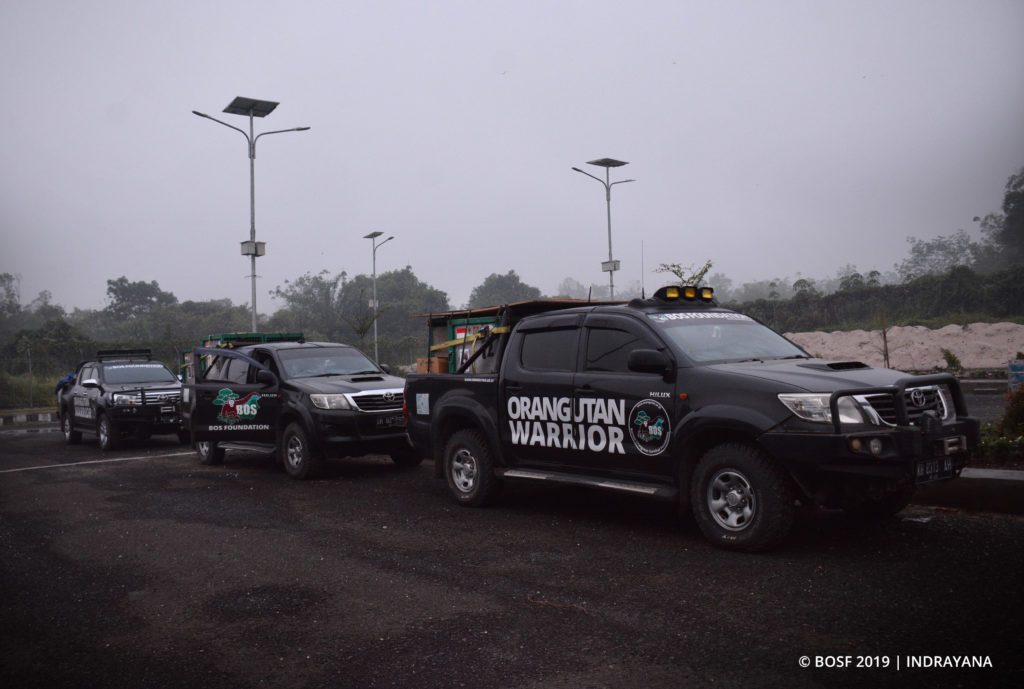 The next morning at Kuala Kurun Airport, a large MI-8MTV type transport helicopter, made in Russia and utilized by the BNPB for fire patrols, arrived to fly the orangutans directly to Totat Jalu Camp in the Bukit Batikap Protection Forest. This large helicopter, capable of holding all eight orangutan transport cages, was quickly loaded up with the orangutans so they could be brought together in only one flight. A mere 48 minutes later, the helicopter had already completed the 133 km journey. 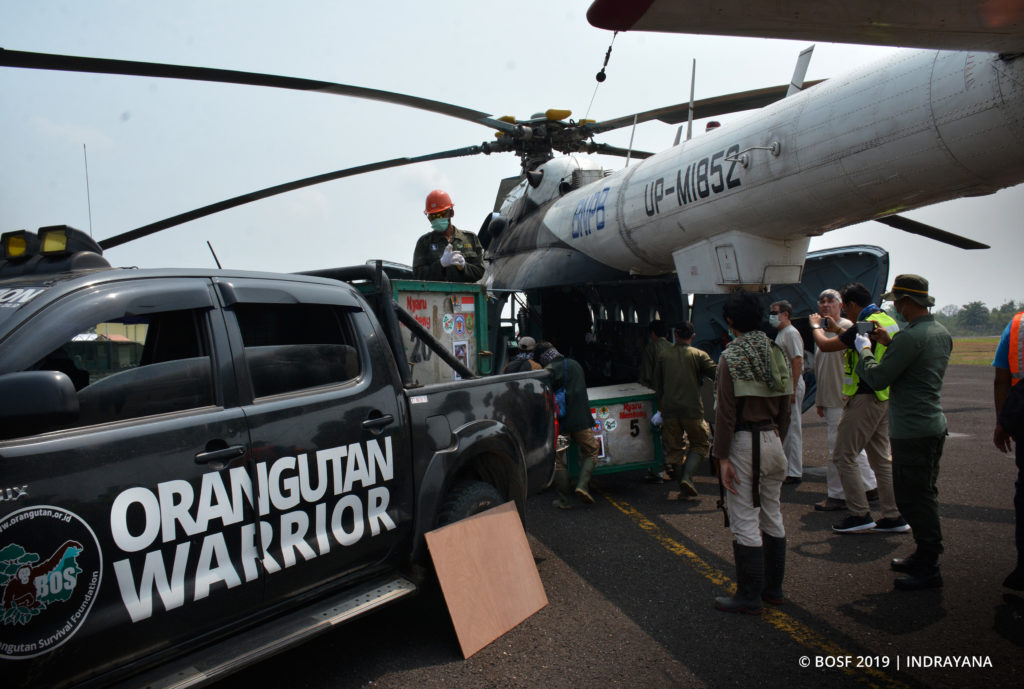 Loading up the transport cages in to the helicopter 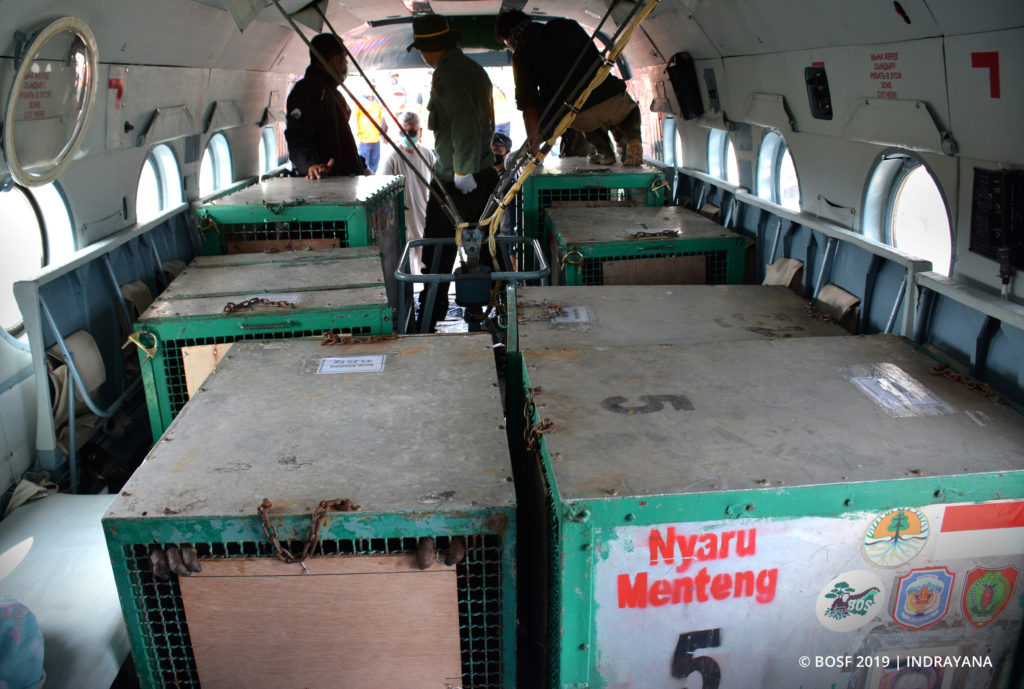 By noon, the eight orangutans had been unloaded from the helipad located directly behind the Totat Jalu Camp in the Bukit Batikap Protection Forest. From there, our team brought the cages to the designated release points and on that same day these lucky orangutans were released into their new forest home! 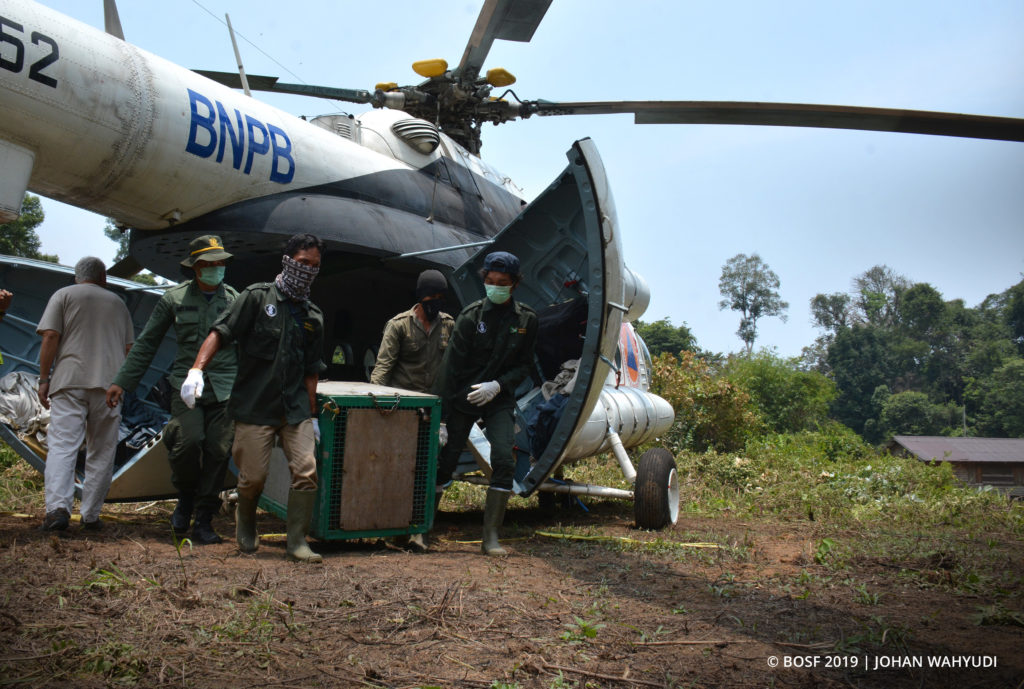 Unloaded orangutan cages from the helicopter 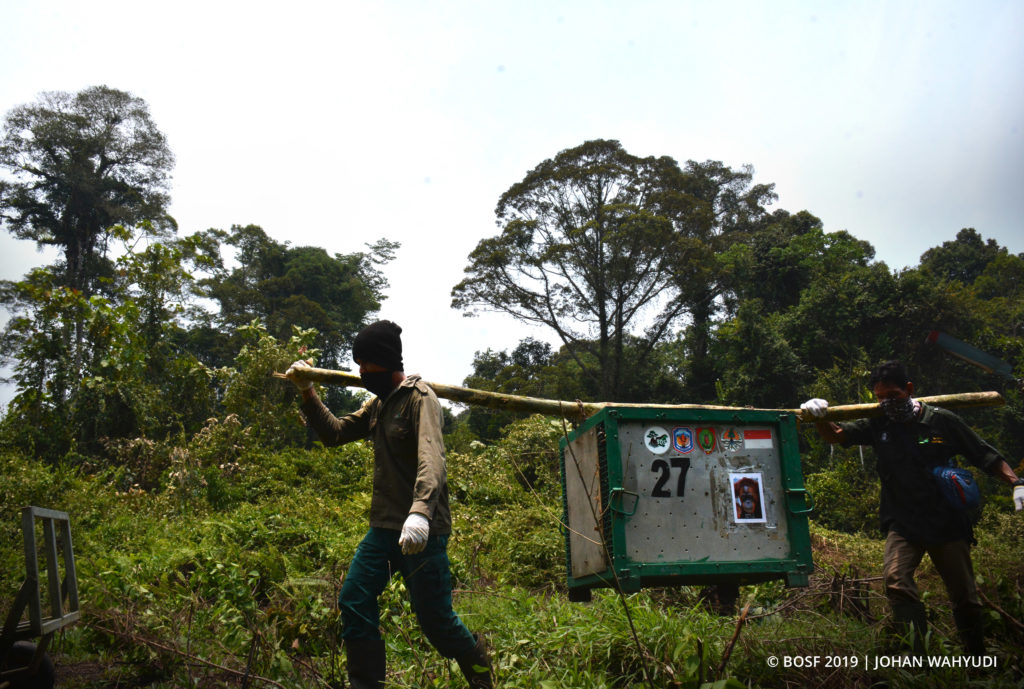 Our team brought the cages to the designated release points 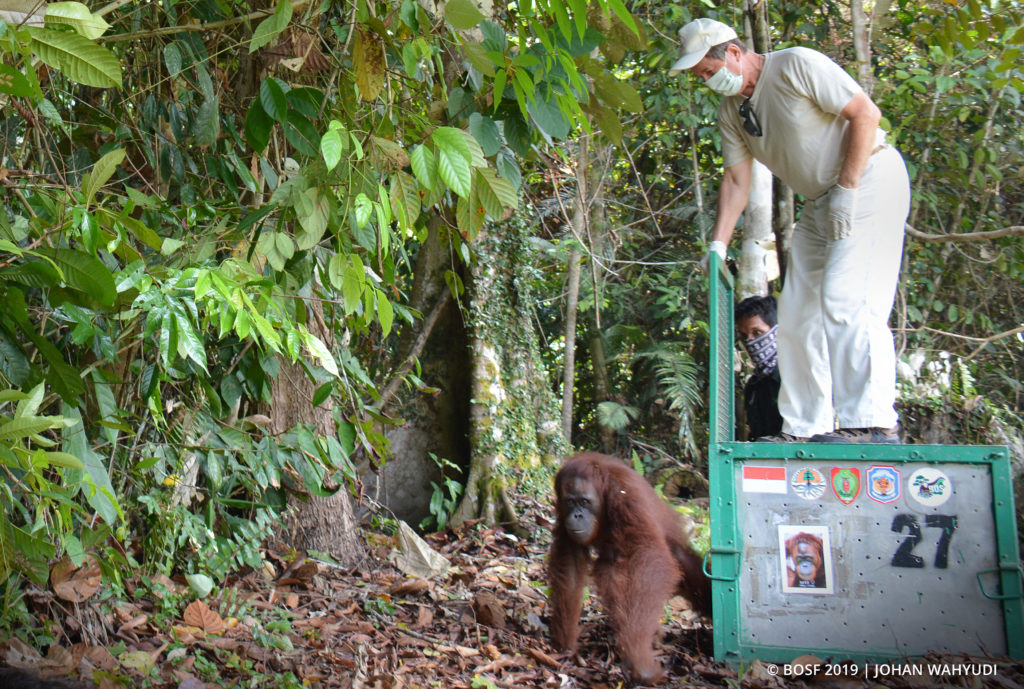 The BOS Foundation would like to thank everyone for the generous support that helped to carry out this release. Without participation from the Ministry of Environment and Forestry, the Central Kalimantan BKSDA, the National Disaster Management Agency, and support from the Central Kalimantan Provincial Government, Murung Raya Regency Government, US Fish and Wildlife Service, and our global partners, Kisar and his friends would not have been given true freedom in the wild forests of Batikap.