April 5, 2018 — This week, four more orangutans from the BOS Nyaru Menteng Rescue and Rehabilitation Centre were released to the Bukit Baka Bukit Raya National Park (locally known as TNBBBR). The group included three females named Nabima, Hayley, and Tari; and a male named Meong. The four orangutans were released to the wild by Indonesian celebrities and public figures: model-singer-actress, Sophia Latjuba; model-TV host, Richard Kyle; TV host-actress, Kaemita Boediono; Deputy of the Central Kalimantan Police, Police Grand Commissioner, Dedi Prasetyo; and a representative from the Blue Bird Group – one of the BOS Foundation’s donors supporting this particular release event. All were excited to witness and give direct support to the orangutan conservation effort.

Our release team’s distinguished guests attracted the local media and were more than happy to lend their skills to give interviews. BOS Foundation CEO, Dr. Jamartin Sihite, thanked all parties who assisted with both this particular release and the orangutan conservation effort in general. The BOS Foundation views conservation as a collaborative effort, as it impacts on all our lives, and we welcome all support to save and protect orangutans.

Our technicians assisted the veterinary team at our pre-release quarantine facility to sedate the release candidates. The team conducted final health check-ups on all four orangutans, before carefully placing them in their individual transport cages. The first candidate to undergo the process was Meong; the only male for this release, who was the heaviest and hence the most difficult to tranquilize. Nabima, Hayley, and Tari came shortly after him. 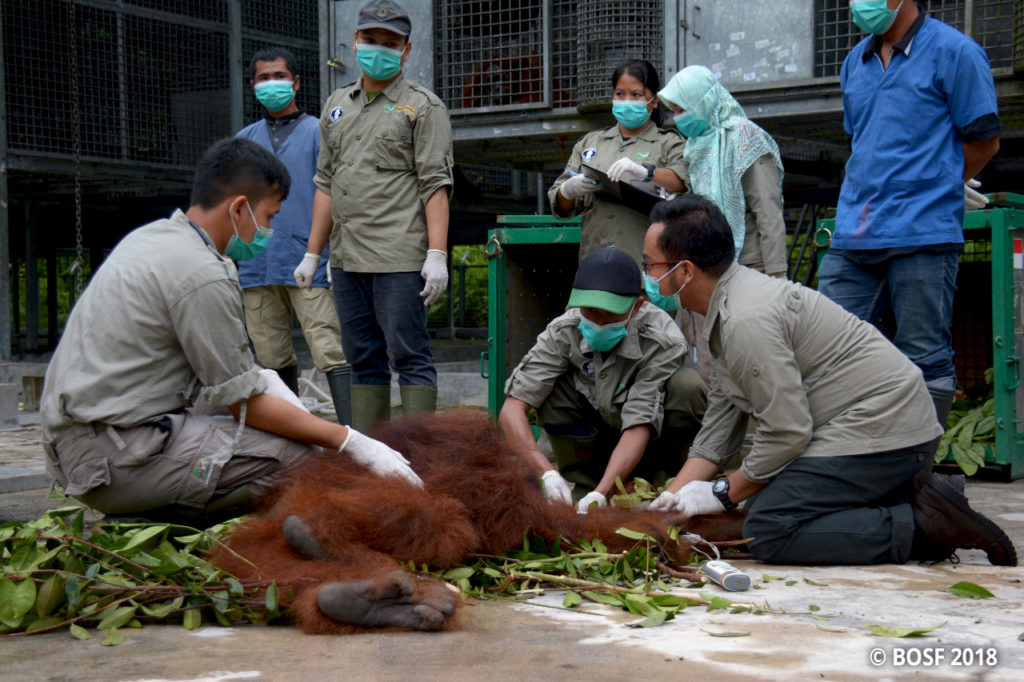 Our team had all the orangutans safely loaded up by the early evening, but waited for the sleepy orangutans to wake up, and make sure they were all in good health, before embarking on the long journey.

Welcome to the Jungle!

The release team left from Nyaru Menteng at around 7.30 p.m. in two of our 4×4 pickup trucks, and headed straight for Tumbang Tundu village, the last village on the way to TNBBBR that is accessible by road. The entire trip took a little over than six hours—with the team stopping every two hours to check that the orangutans were doing okay—finally arriving at Tumbang Tundu slightly after midnight.

After resting briefly at Tumbang Tundu, the team continued the journey by ‘klotok’ (river boat) at sunrise. 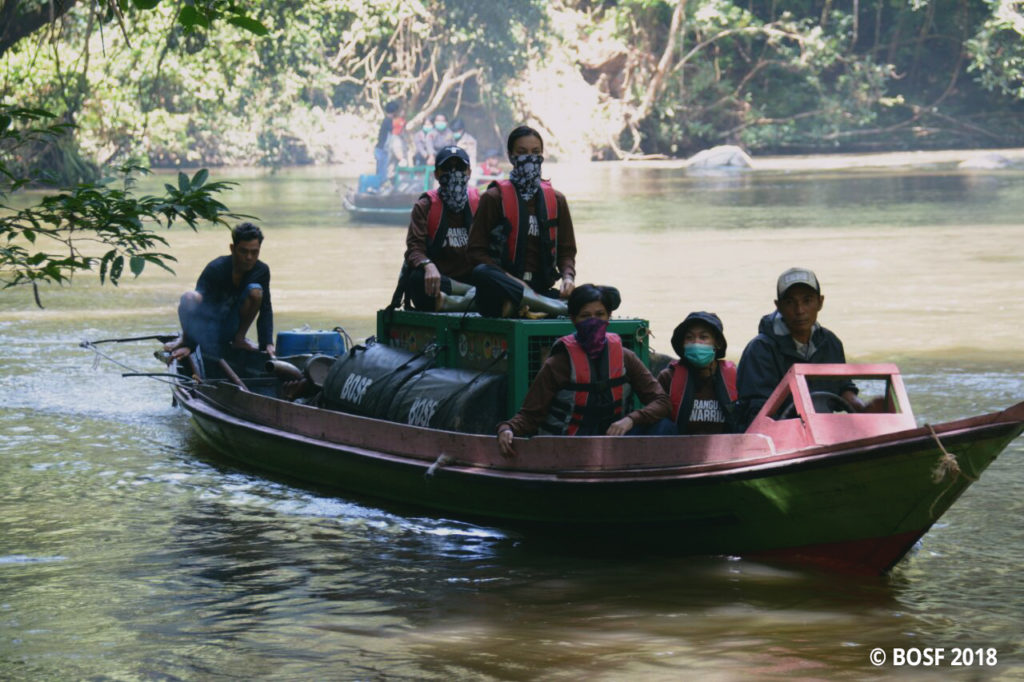 Photo: Orangutan release team travels by ‘klotok’ to the heart of the forest

After a five-hour boat ride, the release team had finally reached their destination. The release points were strategically located near the river banks, to minimise the distance that the transport cages needed to be carried from the boats, and to provide a quick evacuation route, should it be required. Our experience with releasing hundreds of orangutans have taught us that even small mistakes can see a well-planned release event quickly become dangerous.

On this day, however, luck was on our side, and all four cages were successfully carried to the release points and set in place. The four orangutans could not wait to taste true freedom! 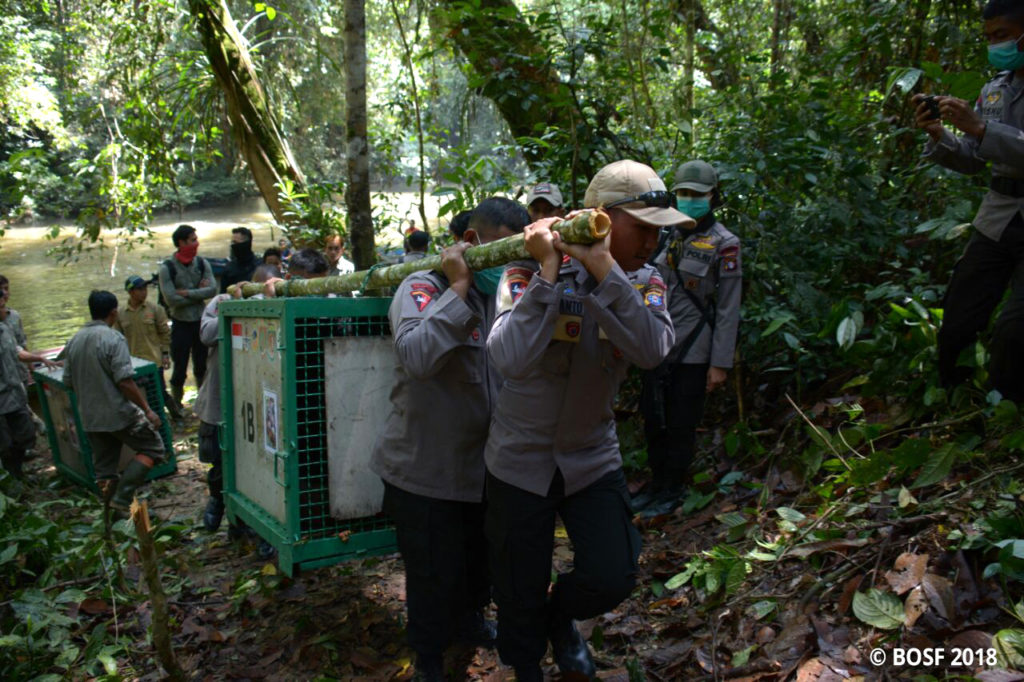 Photo: The transport cages are carried to the release points

Model-singer-actress, Sophia Latjuba, opened the first cage. Tari, the five-year-old wild orangutan who was rescued in Gunung Mas Regency in January, burst out of her cage and quickly climbed up the nearest tree, eager to make up for lost time.

The next to go were Hayley, released by Richard Kyle, and Meong, released by Kaemita Boediono. Nabima was the last orangutan to be released, with a representative of Central Kalimantan Police doing the honours. These three survivors, who had spent years in the rehabilitation center, quickly left their cages and welcomed the fresh air of the forest.

Welcome to the jungle, everybody! 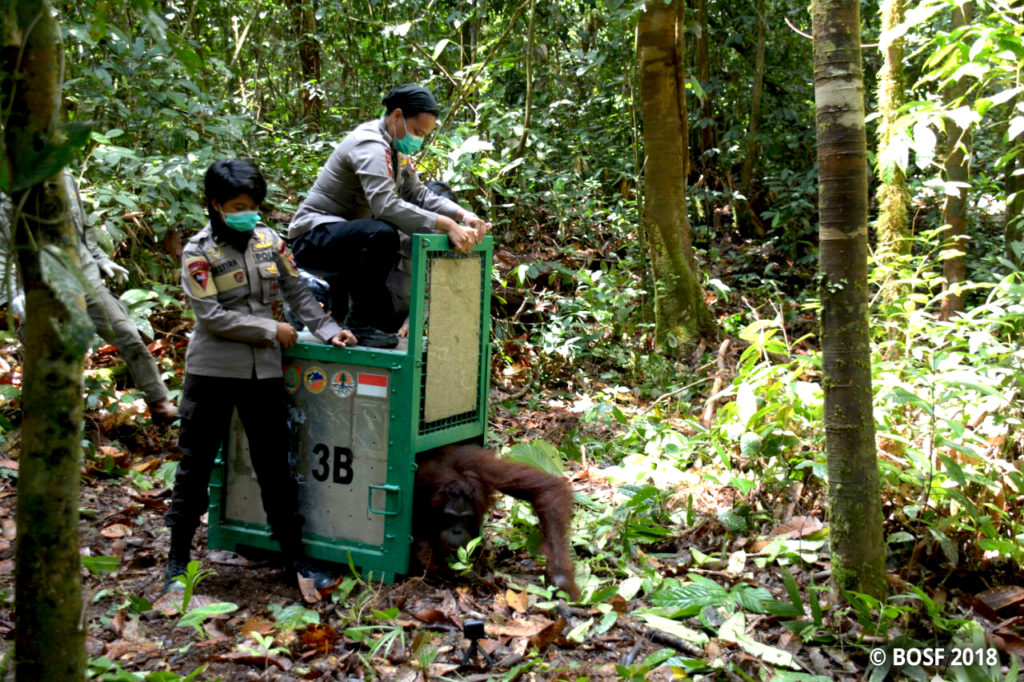 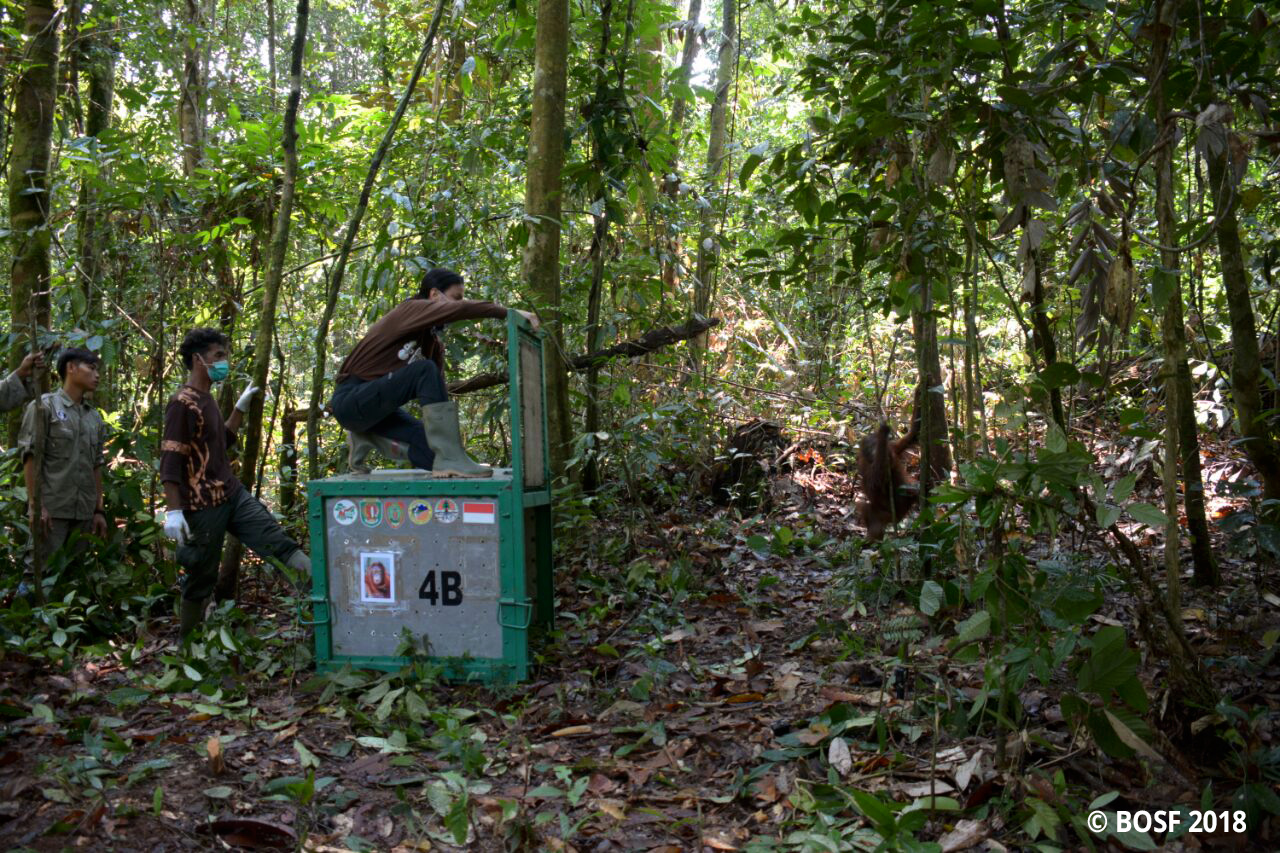 The PRM (Post-Release Monitoring) team, who are tasked with monitoring the behaviour and health of new releases, took over immediately. After the first week, our released orangutans will hopefully have begun to adapt and travel farther into the forest, making them more difficult for the PRM to track. Still, the first week of data—intensively collected by the PRM team from the time each orangutan wakes up until they go to sleep—is vital for determining how the release candidates will adapt to their new home.