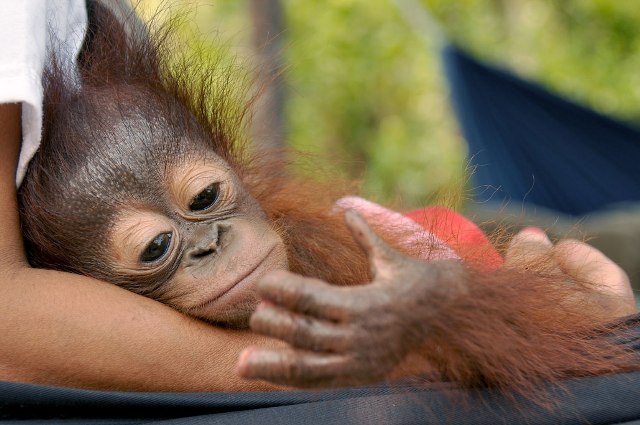 Often his eyes wander to his three fingers, of which only half of them remain.

Jan 2014 -- His expression shows sadness and desperation. Often his eyes wander to his three fingers, of which only half of them remain. He is weak and barely has any strength or the will to move. He is Sura, a beautiful orangutan baby boy.

Having rescued hundreds of orangutans, the Nyaru Menteng Team was having a hard time to find a suitable name for him. Indonesians believe that the right name can inspire greatness from the bearer. And at the BOS Foundation, it is our regulations that each rehabilitation center must find a name that has not been used before for other orangutans (including the deceased) in the center. So we finally turned to our loyal friends and supporters on Twitter for help. From October 22 to 25, we asked them to help #nametheorangutan. 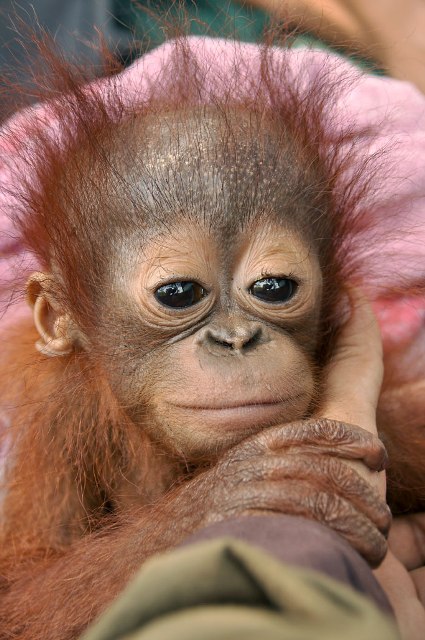 A Brave Name for a Brave Orangutan

A lot of people enthusiastically took part in the #nametheorangutan contest. And many of the names were so inspiring. But we finally narrowed them down to 10 great names, from which the Nyaru Menteng Team chose the best one for our new orangutan friend. The chosen name is Sura, given by Ade Putri Paramadita, also known as @missHOTRODqueen on Twitter.

The name came from ancient Balinese repertoirs of gamelan (Indonesian traditional musical ensemble). Depicting the royal ruling kingdoms of pre-20th century Balinese society, the word Sura means “bravery”. It is a perfect name for a brave orangutan and we all sincerely hope that Sura will grow into a big, brave orangutan, despite having been physically and psychologically tormented in his past.

The Beginning of Sura’s New Life

On Thursday, October 17 2013, a staff member from the Centre of Orangutan Protection (COP) contacted the Central Kalimantan Orangutan Reintroduction Center in Nyaru Menteng, providing information on a baby male orangutan who was kept by a resident and was about to be handed over. There was also additional information that the orangutan baby was injured. The Nyaru Menteng team immediately coordinated with the Central Kalimantan Conservation and Natural Resources Authority (BKSDA) to rescue the orangutan. Due to technical difficulties, colleagues from COP had to deliver the orangutan baby directly to Nyaru Menteng. Vets Agus Fachroni and Merryl who were on the night shift received and recorded the data of the baby’s origin.

According to information from COP, he was handed over by a resident named Ada in Tumbang Koling village, East Kotawaringin Regency. Ada found the orangutan baby when he was cutting trees for woodblock material in the concession area belonging to PT. Nabatindo Karya Utama (PT. NKU – BGA Group). The area has recently been opened as a new oil palm plantation in the Tumbang Koling area. Ada took care of the orangutan baby for three days before giving him up to COP.

Care and Love in Nyaru Menteng

The Nyaru Menteng Medical Team immediately conducted an initial health check for Sura. He was confirmed to be around 4 months of age based on his dental condition. The team also found a painfully heartbreaking fact: Three fingers on his left hand had been cut off. The wounds were opened and looked as if they were derived from a knife or machete blow. The fingers were swollen and no longer bleeding. Sura was then put into the baby group quarantine, receiving around the clock intensive care from three babysitters. 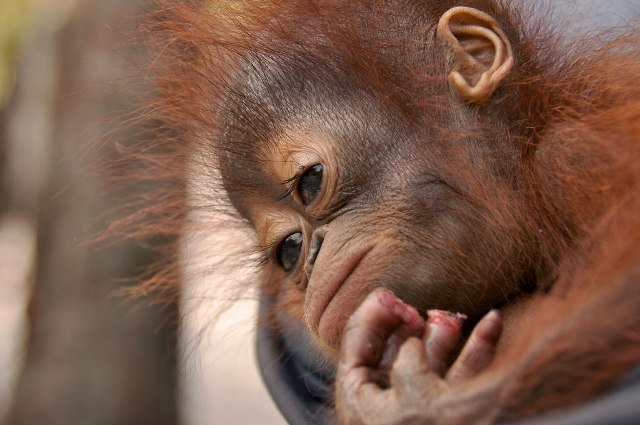 The wounds were opened and looked as if they were derived from a knife or machete blow.

The next day, he was still too weak to move around. He didn’t show any wild behaviour whatsoever. He is still too small and too weak. He would only hold tight to his babysitters. Often he looked at his cut fingers, as if questioning how this happened. His forest home has been destroyed and he was cruelly and brutally separated from the love of his mother. The remaining stumps of his fingers will remind him of this forever.

We do hope Sura will begin to gain strength. The abundance of love and care from the babysitters might not be able to replace his lost mother, but we will give him so much love and the best care we can. Someday, we will see Sura as an adult male orangutan ready to explore the real forest of Kalimantan, tough and brave, just as his given name. 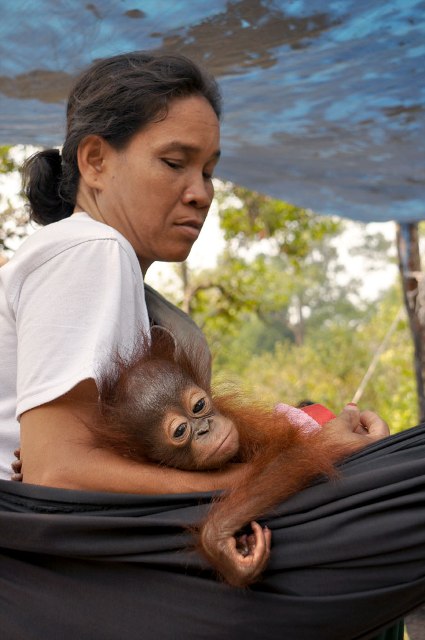 We will give him so much love and the best care possible.

Last but not least, congratulations and thank you very much to Ade Putri Paramadita for giving such a beautiful name for this beautiful orangutan!