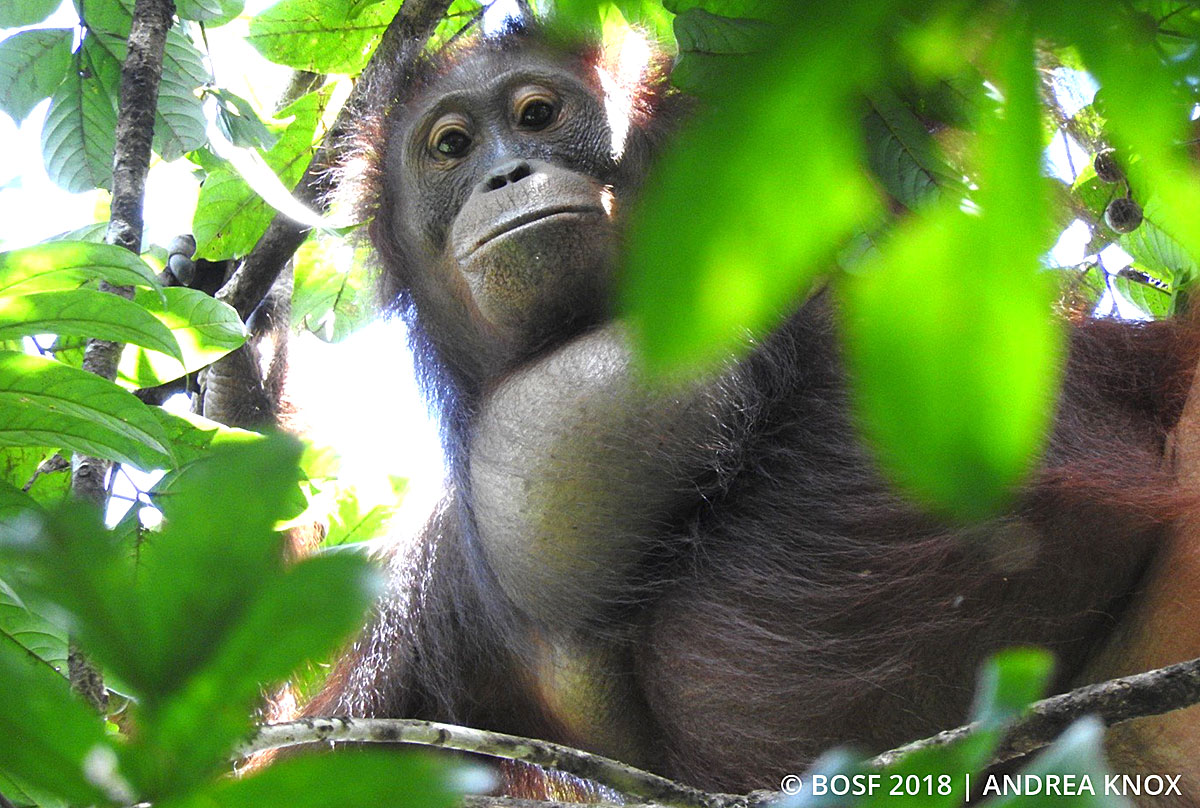 January 9, 2019 — Our Post-Release Monitoring (PRM) team from Totat Jalu Camp, in the Bukit Batikap Protection Forest, recently observed Nobri, a 15-year-old female that was released in April 2016. Nobri was featured in the 2018 story, “Hide-and-Go-Kiss-Squeak” (link to previous story), which documented her growth toward becoming a true, wild orangutan.

These days, Nobri navigates the jungle with ease and prefers to be alone rather than in the company of other orangutans. She detests being followed by humans. Nobri never experienced life in an enclosure, as she was born in 2005, to mother Shelli, on one of the BOS Foundation’s pre-release islands in Central Kalimantan. She is, in every way, a truly wild orangutan.

On the day we observed Nobri, our main focus was on monitoring her health. During our patrol, we noticed that there was an abnormality; the glands in her arm pits, and her air sac appeared to be swollen. 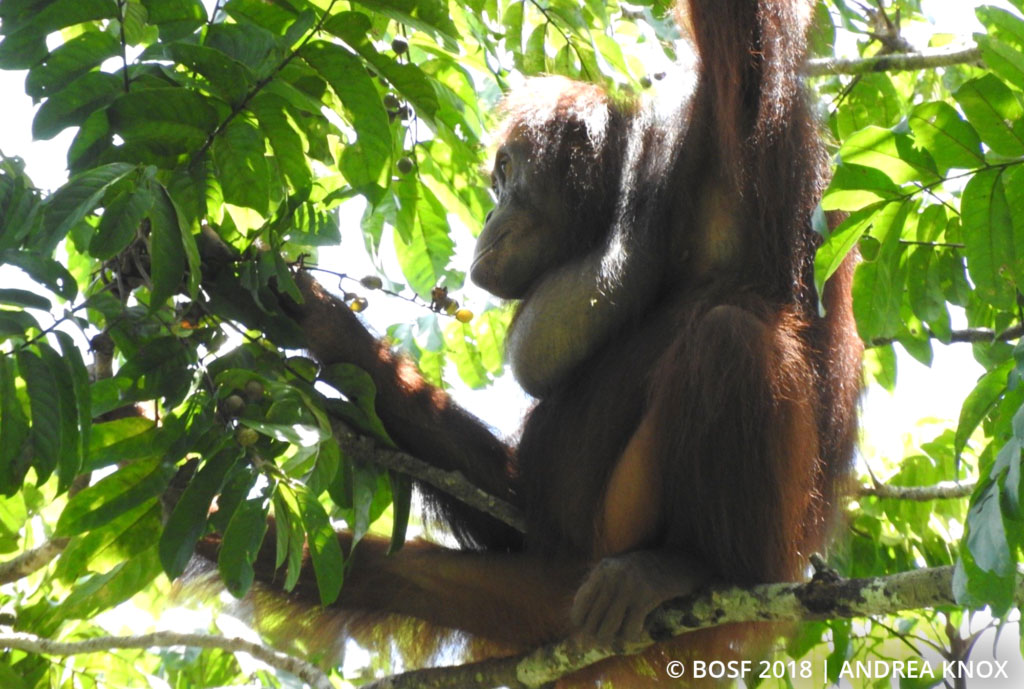 An orangutan’s air sac is the pouch that sits just beneath the chin. It is vital for creating the loud, bellowing vocalisations that can be heard throughout the forest. Swelling of the air sac is usually a result of excess fluid build-up because of an infection, definitely a cause for concern. Even though Nobri, a tough orangutan for sure, seemed quite unfazed by her potential infection, we had to give her a full health assessment to ensure that she would thrive in Batikap Forest for years to come.

The team quickly contacted our Nyaru Menteng Orangutan Rehabilitation Centre via radio for a veterinarian to be sent immediately to check up on Nobri. Vet Greggy Harry Poetra and one of Nyaru Menteng’s best sedative dart gun snipers were dispatched quickly to Batikap. The trip was not easy, as Batikap is a three-to-four-day journey from Nyaru Menteng, via treacherous roads.

After a few days, the pair arrived at the location and quickly examined Nobri, who was sedated and placed in a transport cage near Totat Jalu Camp for further treatment. Her symptoms indicated that she was suffering from air sacculitis—a bacterial infection of the upper and lower respiratory tract, including the air sacs; a potentially deadly disease! 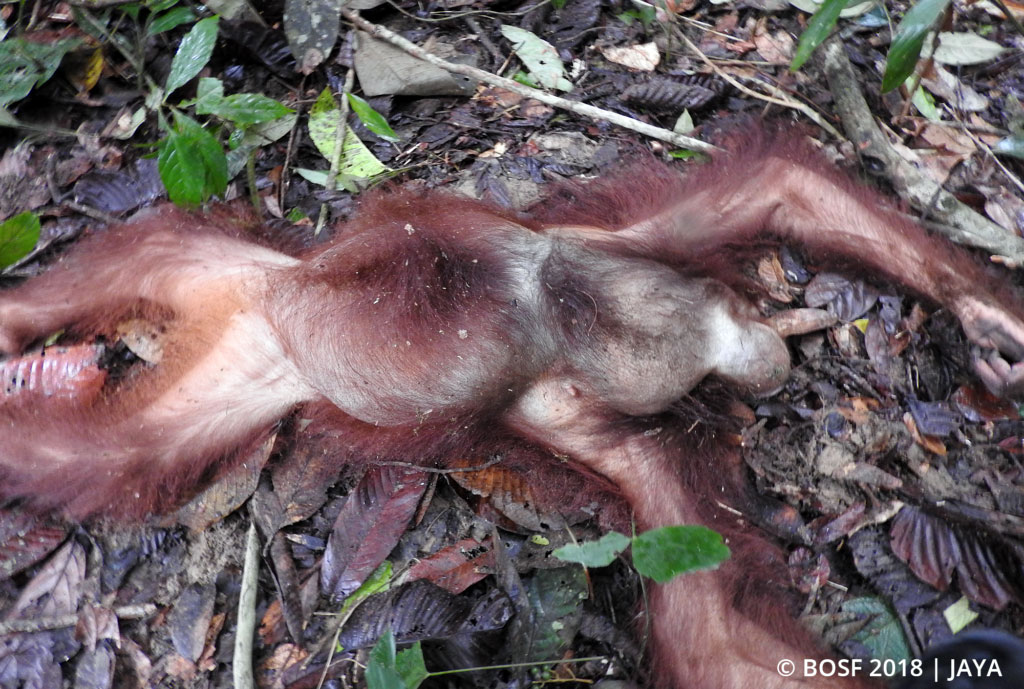 That same afternoon, Nobri awoke in our holding cage for sick orangutans. Despite her condition, she made it clear that she was not happy to be there; rocking the entire cage as she swung about, and kiss-squeaking to voice her displeasure. Her wild spirit was indeed still strong, and would never be broken by something as inconvenient as a deadly disease.

The next day, our veterinarian sedated Nobri once again to treat her illness. Despite the absence of high-tech equipment in the jungle, the initial treatment was a success. At first, Nobri was dazed as the anaesthesia wore off, but after an hour or so she was already climbing the enclosure and kiss-squeaking at us all over again. She continued to act like the wildest orangutan we had ever met!

Unfortunately, Nobri’s road to recovery will be a long one, as she still needs daily medicinal treatments. She continues to persevere with her protests, however, as nothing is going to dampen this tough girl’s spirits!