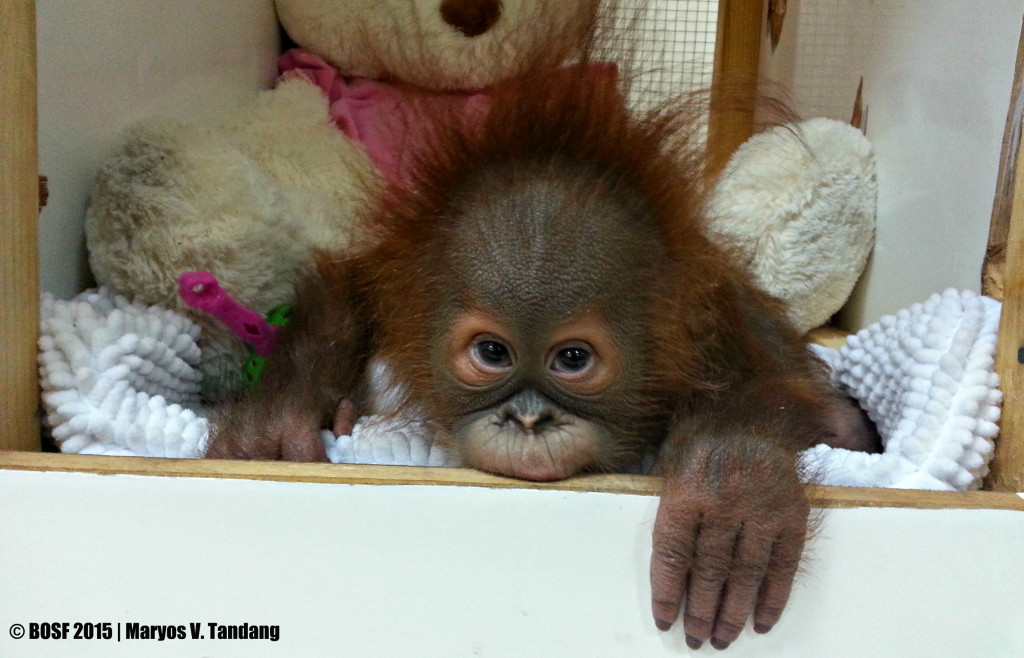 The Indonesian Government, represented by the Directorate General of Natural Resources and Ecosystem Conservation of the Ministry of Environment and Forestry and the Indonesian Embassy in Kuwait supported by the Kuwait Zoo and worked in collaboration with the BOS Foundation to return another baby orangutan aged around 10 months old, illegally smuggled to Kuwait in July 2015.

Jakarta, 23 November 2015. In July 2015, the Kuwait International Airport successfully intercepted an attempt to illegally smuggle two baby orangutans into Kuwait from Jakarta. The Indonesian Embassy in Kuwait quickly collaborated with the Ministry of Foreign Affairs and the Ministry of Environment and Forestry in order to repatriate these two orangutans. Initial health checks revealed that both were female and aged 2 years and 6 months old respectively.

On 13 September 2015, the 2-year-old who we named MOZA, was safely repatriated to Indonesia and is currently in the care of Taman Safari Indonesia, Cisarua, Bogor, West Java. The other baby, now 10-months-old, remained in the care of Kuwait Zoo as was deemed too young to travel.

The Indonesian government, represented by the Directorate General of Natural Resources and Ecosystem Conservation of the Ministry of Environment and Forestry and the Indonesian Embassy in Kuwait in collaboration with the Borneo Orangutan Survival Foundation (BOS Foundation), has now repatriated the second orangutan baby who we have named Puspa. The baby was transported by Kuwait Airways flight number KU415 and landed in Soekarno-Hatta International Airport, Tangerang on 23 November 2015 at 15:40 local time. 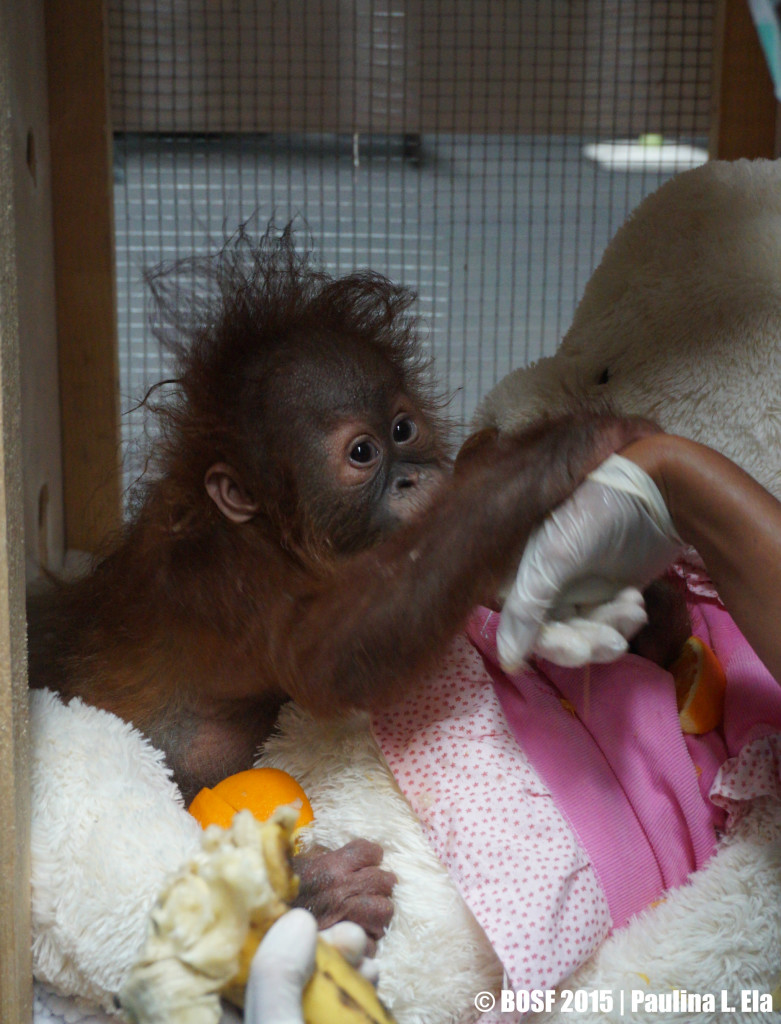 During the process of repatriating Puspa, the BOS Foundation contributed by providing funds for transportation of 1 (one) individual orangutan, a set of detailed Standard Operating Procedures to ensure safe transportation of the baby orangutan, as well as an experienced veterinarian to accompany Puspa during her flight from Kuwait to Jakarta. 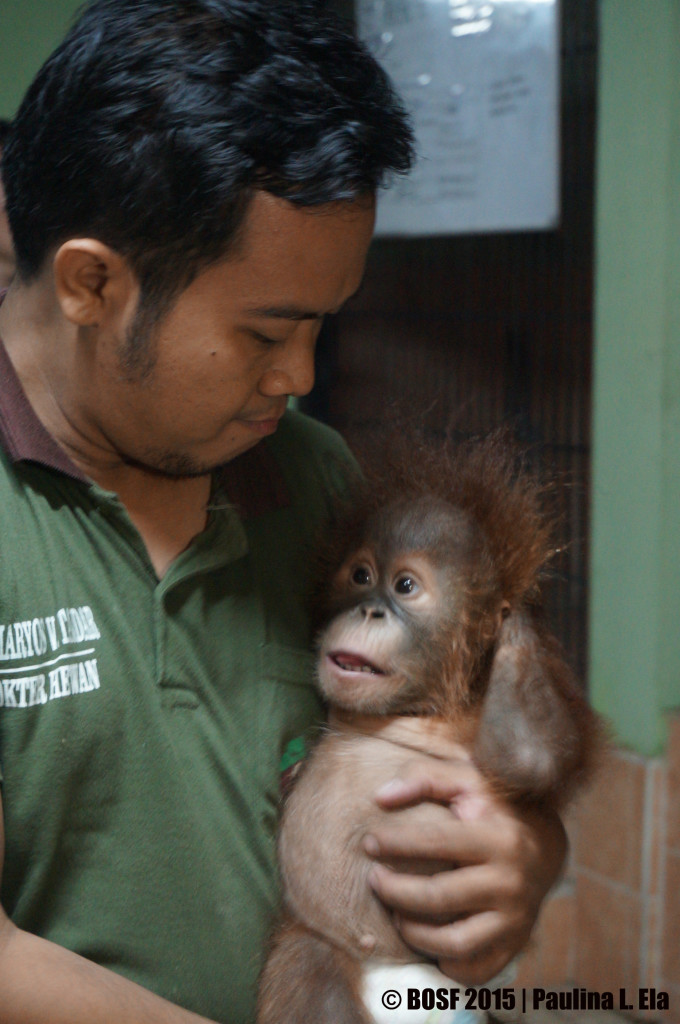 A physical examination by the accompanying vet has revealed that Puspa is in very good health even after a 10-hour long flight.

From the Soekarno-Hatta International Airport, Tangerang, Puspa was transported directly to Quarantine installation of Taman Safari Indonesia, Cisarua, Bogor, West Java, under the care of a joint team of the Ministry of Environment and Forestry and the BOS Foundation. Puspa is now undergoing a quarantine process.

The quarantine process consists of thorough health and DNA tests to determine where she will be rehabilitated. Puspa joins other baby orangutans, Moza and Junior, who were already in quarantine and their test results conclude that both are Bornean orangutans from Central Kalimantan (Pongo pygmaeus wurmbii). A thorough rehabilitation process is critical to give these three orangutans a chance to someday return to their true habitat, the forest.

Ahmad Fachmi S, Head of Social and Culture Information of the Indonesian Embassy in Kuwait, says, “The Indonesian Embassy in Kuwait has been working in collaboration with the Kuwait Zoo, the Directorate General of Natural Resources and Ecosystem Conservation of the Ministry of Environment and Forestry, and the BOS Foundation in order to return these two orangutans. This particular repatriation has occurred due to a strong commitment from both the Kuwait and Indonesian governments, to preserve this endangered species as stated in Appendix 1 CITES.”

Director General of Natural Resources and Ecosystem Conservation of the Ministry of Environment and Forestry, Dr. Ir. Tachrir Fathoni, M.Sc. says, “Within the past few months, the government has demonstrated positive results in the fight against illegal animal trade to foreign countries, and succeeded in returning a number of animals. The government is in the process of collecting data on orangutans smuggled abroad with the intention of returning them immediately. As regulated by international law, all illegally transported orangutans must be returned to Indonesia. The Indonesian government wishes to release orangutans back to natural habitat when possible, therefore the Ministry of Environment and Forestry, through the Directorate General of Natural Resources and Ecosystem Conservation, has requested the BOS Foundation to assist in the repatriation of two orangutan babies cared for at the Kuwait Zoo, and if the DNA test results deem, to place them in BOS Foundation’s Orangutan Rehabilitation Centers.”

Dr. Ir. Jamartin Sihite, CEO of BOS Foundation says, “Behind our success of returning these two orangutans from Kuwait, there is still a huge remaining problem. Failed wild animal smuggling and trade cases indicate weak field monitoring and law enforcement. This is like the tip of an iceberg. What you see is nothing compare to what the real deal uderneath. Our field teams frequently encounter hunters, poachers, even illegal loggers. We continually report these findings to the local authorities, with so far no satisfying follow up. If you are committed to eradicate smuggling and illegal animal trade, field monitoring and and law enforcement must be done at the highest standard. You simply can not go half way.” 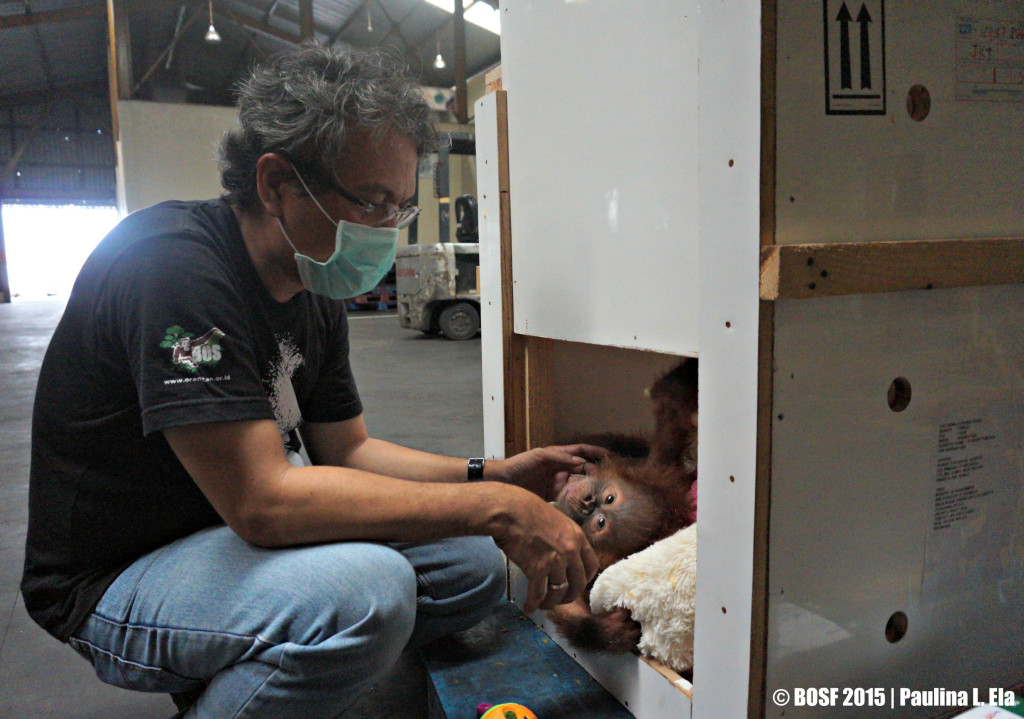 In the past few weeks, the government has been intensifying the fight against illegal animal trade. This includes the arrest of a local animal trade syndicate with ties to an international network by the Directorate of Special Criminal Investigation of the Jakarta Police Force several days ago. Not only should we be working nationwide, the government should also be actively pursuing collaboration with other governments to create an international worldwide monitoring system. We also need to appoint honest, disciplined and professional officers at our international border points.

Orangutans are legally protected by Government Regulation number 7/1999. Their conservation has also been highlighted in the 2007-2017 Indonesian Orangutan Conservation Action Plan and Strategy launched personally by the former President Yudhoyono, during the Climate Change Conference in Bali, December 2007. However the success of orangutan conservation actions will heavily rely on the support and commitment from all parties, the government and people of Indonesia.

The Indonesian government expresses high appreciation towards all the parties involved in this repatriation. The Kuwait International Airport for their interception, the Kuwait Zoo for the care given to Moza and Puspa, as well as the Kuwait Embassy for the prompt coordination and strong commitment to bring home these poor young orangutans.

Orangutans are an umbrella species with a very significant role in forest regeneration and one of Indonesia’s iconic species. It is time for all parties to put more emphasis on orangutan conservation. Because apart from protecting them from extinction, to conserve their habitat also means to create a better quality of life and mutual wellbeing.