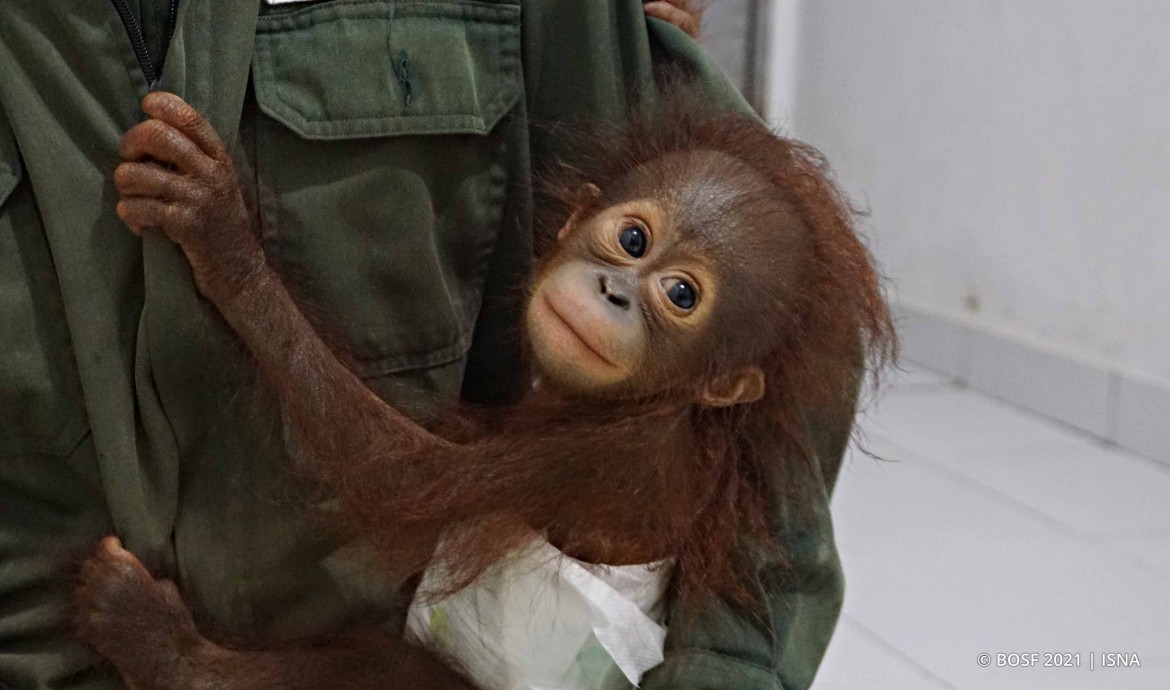 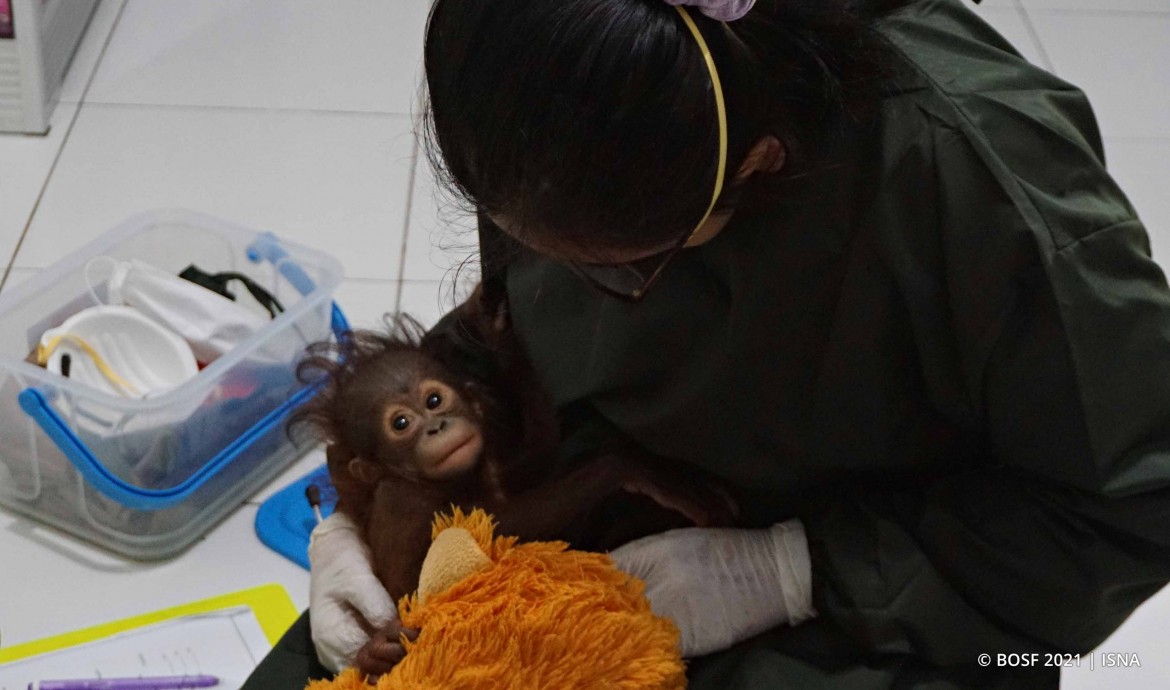 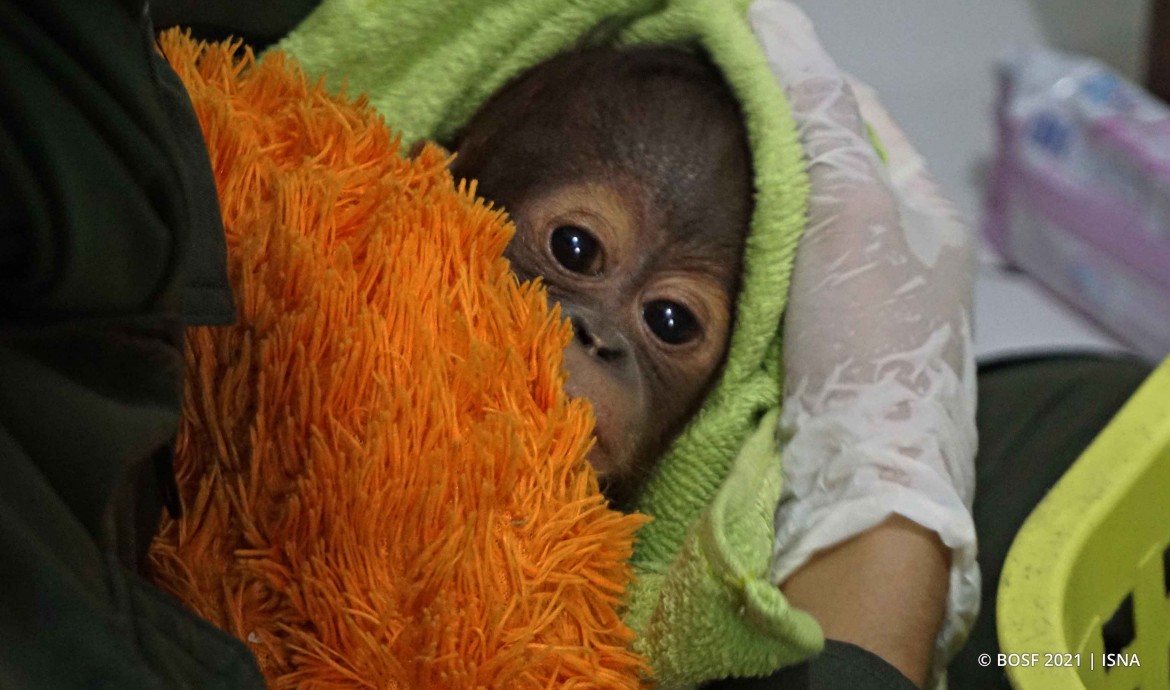 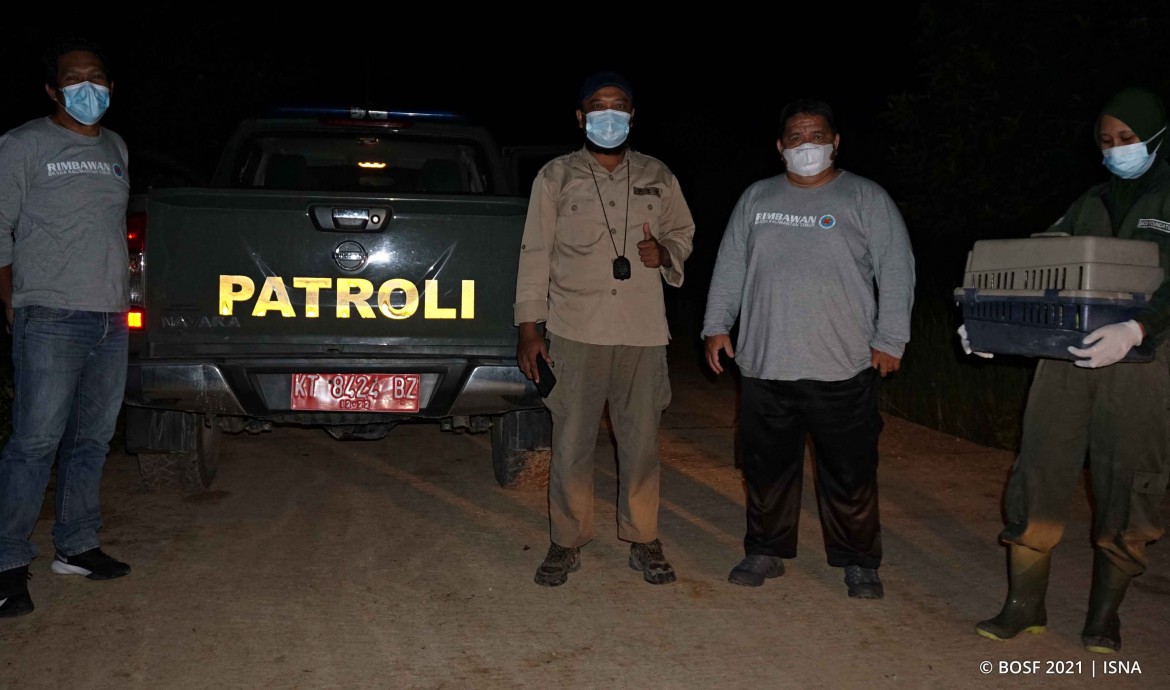 Just after midnight on 9 August, the wildlife rescue team from the Tenggarong BKSDA office, East Kalimantan, arrived at the BOS Samboja Lestari Orangutan Rehabilitation Center to deliver a baby orangutan that had just been rescued. Our team members, who had been waiting at the gate for the important arrival, immediately removed the sleeping baby male from the cat cage he had been transported in.

We received a rescue report, detailing the event, from the Tenggarong BKSDA team. They had received the information from the Bhabinkamtibnas (supervisor for community security and order) of Bengalon subdistrict that a baby orangutan had been found by villagers. Following the news, the Tenggarong BKSDA wildlife rescue team immediately rushed to Bengalon, located more than 200 kilometres away, to rescue the reported baby orangutan.

At the KM92 point along the Bengalon Highway, the team met with the resident who made the initial report to the Bhabinkamtibnas. According to Herman, his neighbors found the baby orangutan alone in the forest across the road, without its mother. The man said that he knew it was illegal to kept orangutans captive, so he immediately contacted the local authority and fire department.

The baby orangutan was kept for one night at his house, in a cat cage. His wife ended up having to hold the baby to calm him down. He was offered some bananas and milk, but would only consume a small amount. On the way to Samboja Lestari, the Tenggarong BKSDA wildlife rescue team fed milk to the baby orangutan three times.

After being handed over to the BOS Foundation’s team at Samboja Lestari, the baby male which we named Galaksi was immediately taken to the Nursery by a surrogate mother. He reportedly grabbed hold of the surrogate mother and tightly clung to her.

At the Nursery, Made Ayudita, our vet in charge for the night, conducted an initial examination and gave milk to Galaksi. From a preliminary health examination, we discovered that he was a bit thin, weighing only 2.7 kg. Galaksi had no injuries, was estimated to be around seven months old judging from his molars, and showed signs he was suffering from an umbilical hernia.

Galaksi was placed in quarantine, and as such was not allowed to interact with the only other baby orangutan in the group, Ruby. A few days later, on 12 August, our medical team conducted an COVID-19 test on him, which produced a negative result.

A few weeks have since passed, and the surrogate mothers have reported that Galaksi is in good health and actively plays, especially with the plush doll in his basket. He seems to enjoy cleanliness, as evident from his habit of always getting out of his basket when he wants to urinate or defecate.

We are very optimistic about this little boy’s future!