December 5, 2017 — Celebrating World Wildlife Conservation Day and our #OrangutanFreedom campaign, together with the East Kalimantan BKSDA, we are delighted to have released another five orangutans from the BOS Foundation-Samboja Lestari Orangutan Reintroduction Program to the Kehje Sewen Forest, in East Kalimantan.

It's A Good Day for a Release!

On Monday, December 4, three male and two female orangutans, including mother-infant pair Ingrid and Ivan, were prepared for their final release. Our Samboja Lestari team sedated Ingrid and her son Ivan, then Yuniar, Tiny, and Santa. Once sedated, the five orangutans were carefully transferred into separate transportation cages, with Ingrid and Ivan placed in one large cage together. 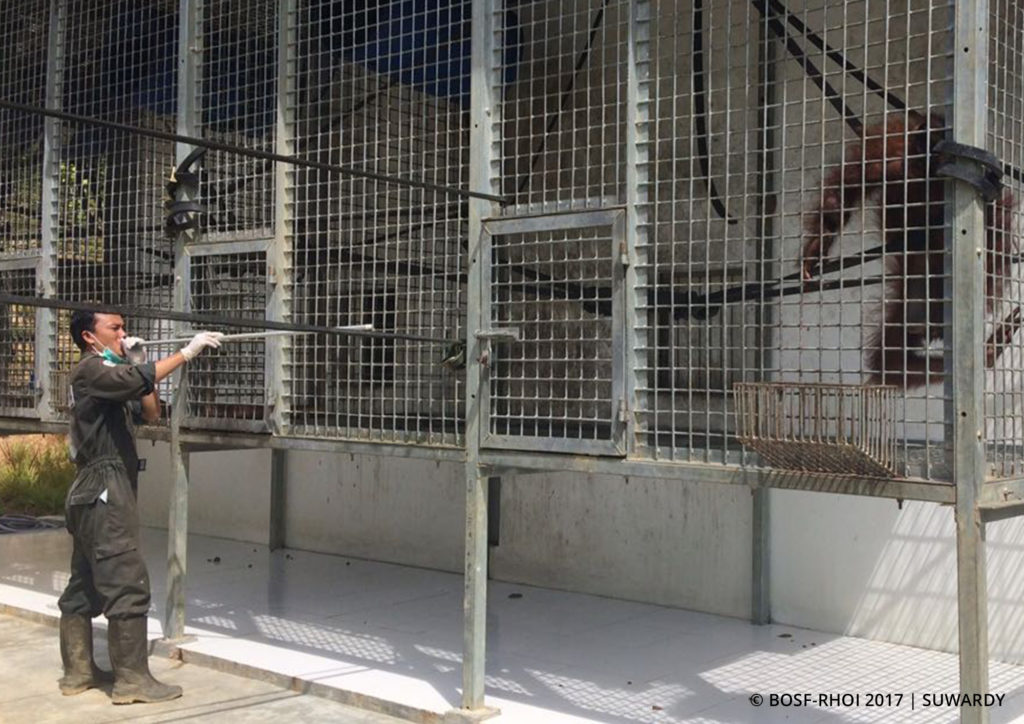 The release team sedates the orangutans. 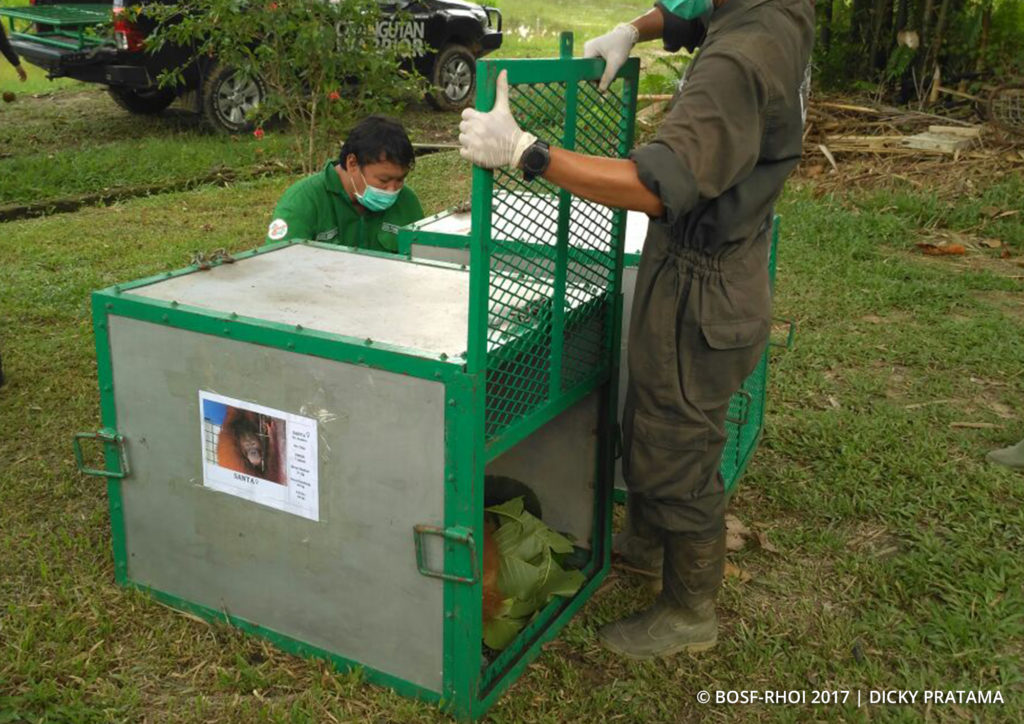 The five orangutans are carefully placed inside transport cages.

The four cages were then loaded onto two 4×4 pickup vehicles, ready to depart. 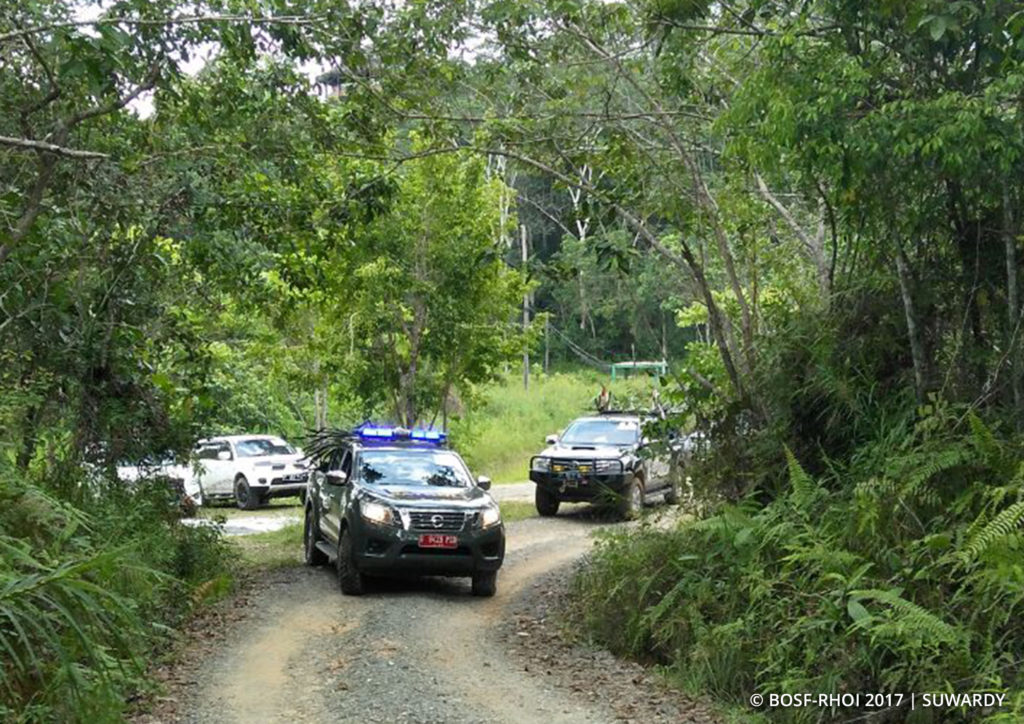 The team departs from Samboja Lestari.

The #OrangutanRelease team departed from Samboja Lestari at around 1 p.m. and headed towards the East Kalimantan BKSDA office in Samarinda to sign handover papers. 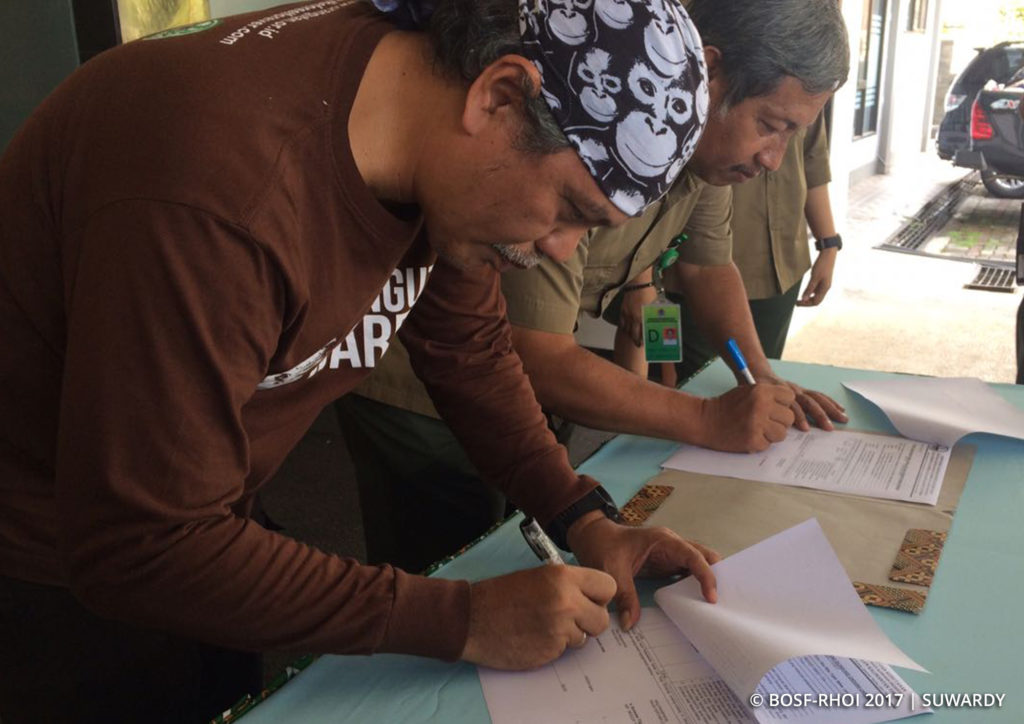 At the East Kalimantan BKSDA office

The team then continued the journey to Selabing village, in Muara Wahau Sub-district, East Kutai Regency. The road trip took around 20 hours, with the team making regular stops every two hours to check the orangutans, and to provide them with food and drinks. 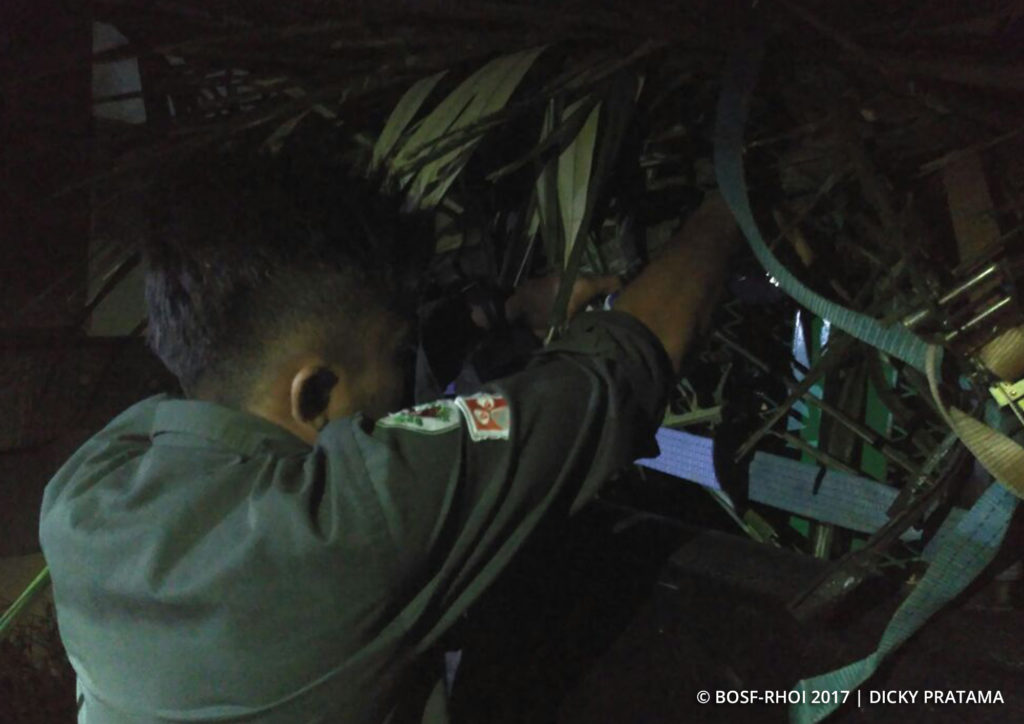 The team checks up on the orangutans en route to the Kehje Sewen Forest.

The team reached Muara Wahau on December 5, just past midnight. Following a brief pit stop at the BOSF-RHO office in Muara Wahau, the team set off again not long after daybreak and the brief rainy spells dissipated on to the last leg of the trip, to the final point reachable by vehicle. 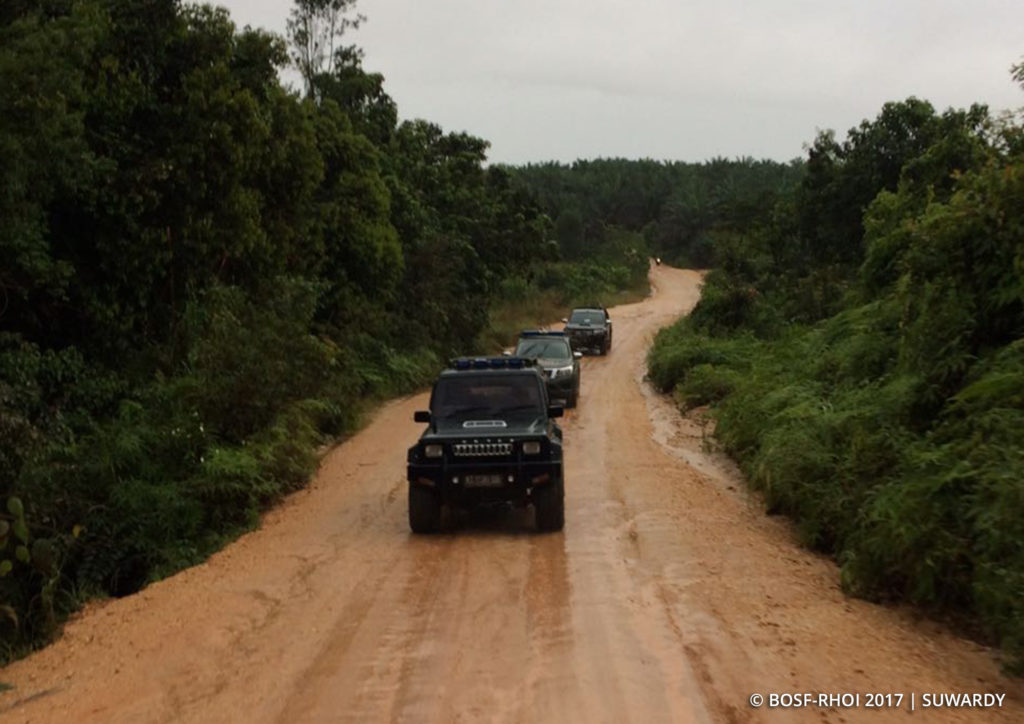 The road trip to the Kehje Sewen Forest.

Once they had reached the banks of the Telen River, the release team moved the transport cages across the river using ces (small motorised boats). 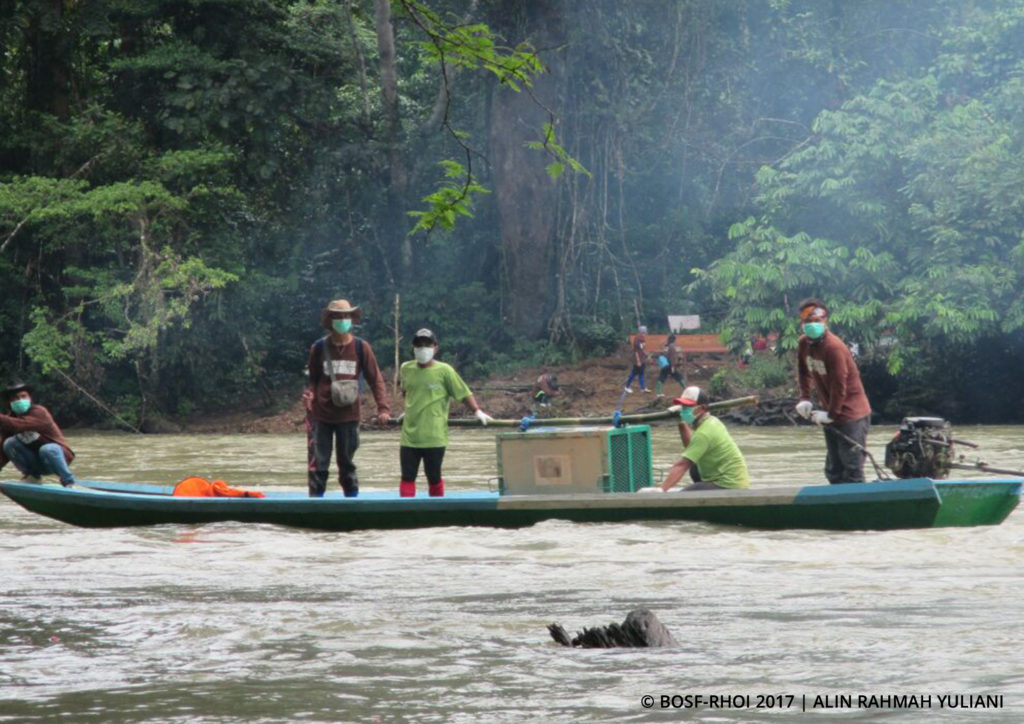 As soon as the team reached the other side of the river, the transport cages were lifted off the boats and carried by team members to predetermined release points deep in the forest. 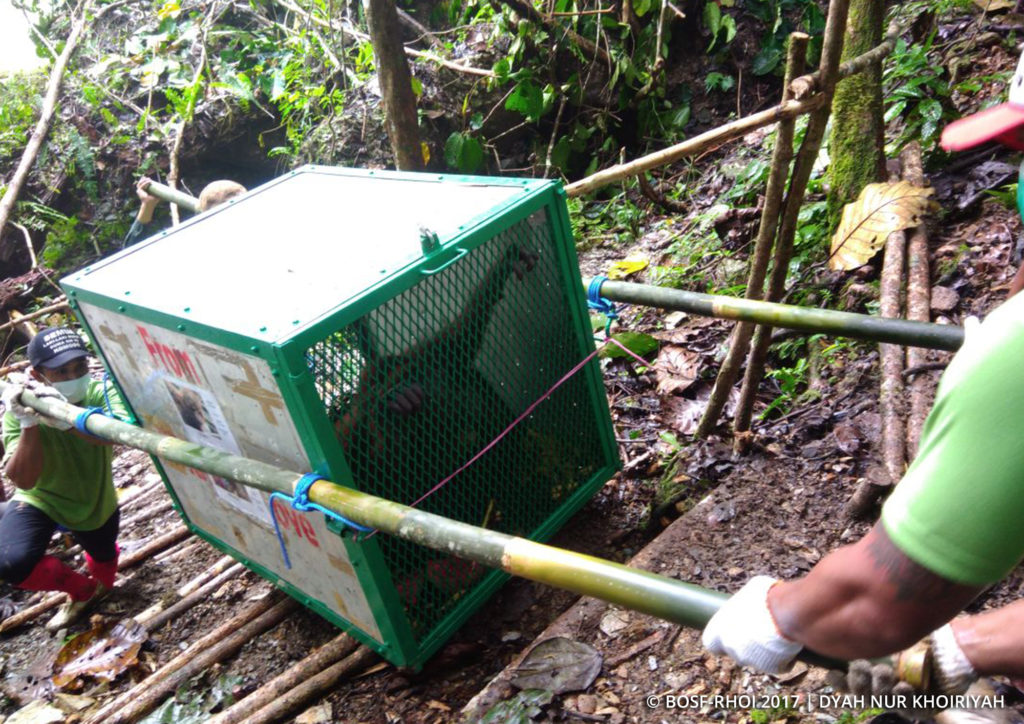 Transport cages carried from the ces to the release points. 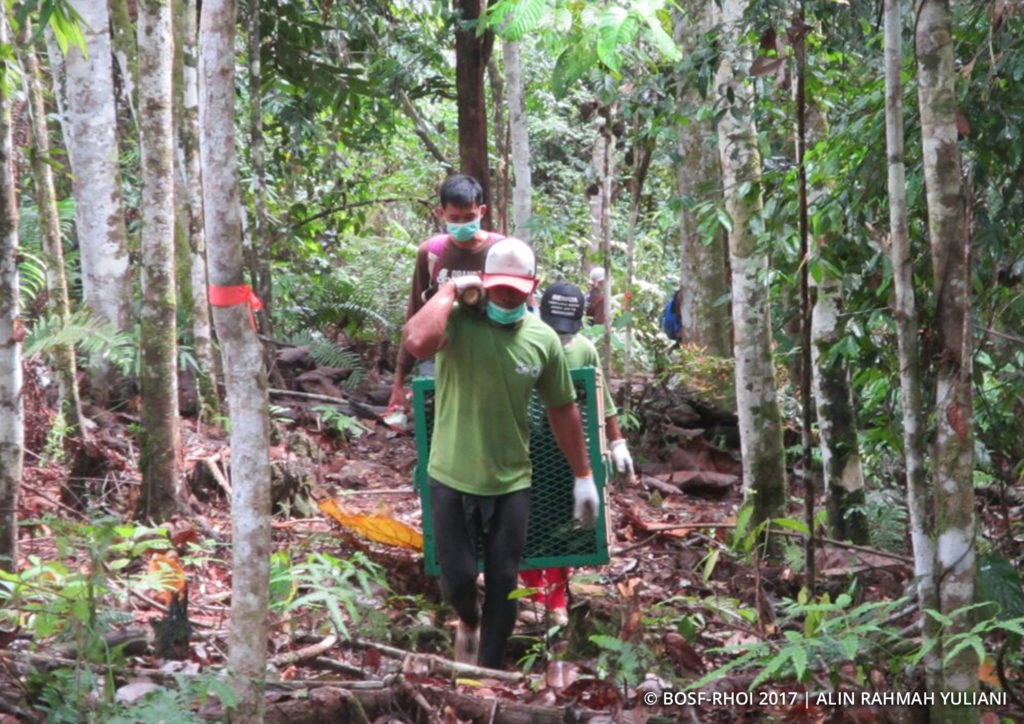 Transport cages carried on foot to the release points.

This release included an orangutan who was rescued by the BOS Foundation on January 10, 2014, from a villager in Jak Luay, Muara Wahau Sub-district, East Kutai Regency. Santa, who was only three years old at the time of her rescue, was found without her mother. Nobody knew how she had become separated from her mother, and a search for the mother failed to locate her (read the story here). Since Santa was still too young to survive alone in the forest, she was brought to Samboja Lestari, where she received loving care and guidance from our team of dedicated babysitters. Santa’s long, 3-year journey to return to the forest had now finally come to an end – she was returning to her natural home in the Kehje Sewen. 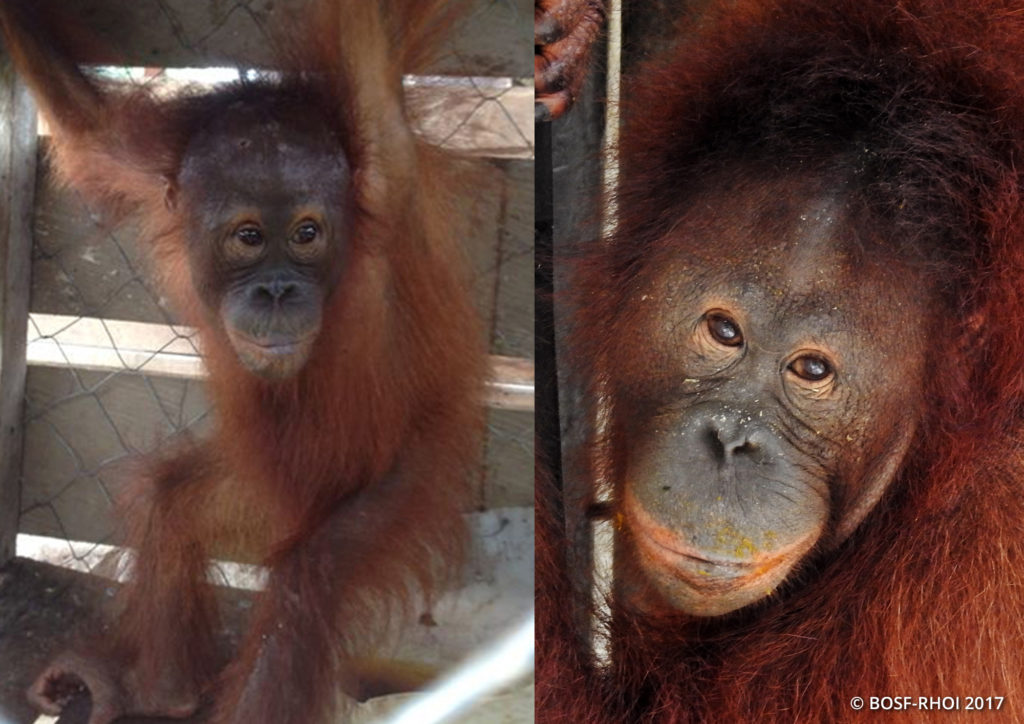 Santa; then and now

All five orangutans were successfully released to the forest to finally enjoy freedom as true, wild orangutans. 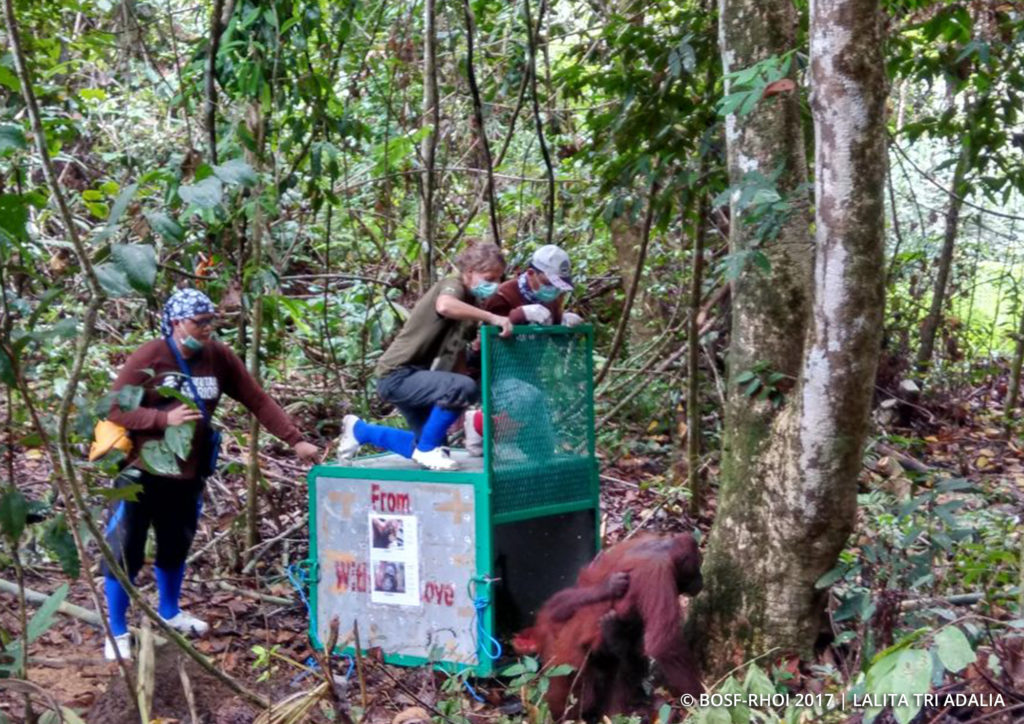 Widodo from BOSF-RHO and Kate Heliwell from The Great Project UK opened Ingrid’s and Ivan’s cage at 10.34 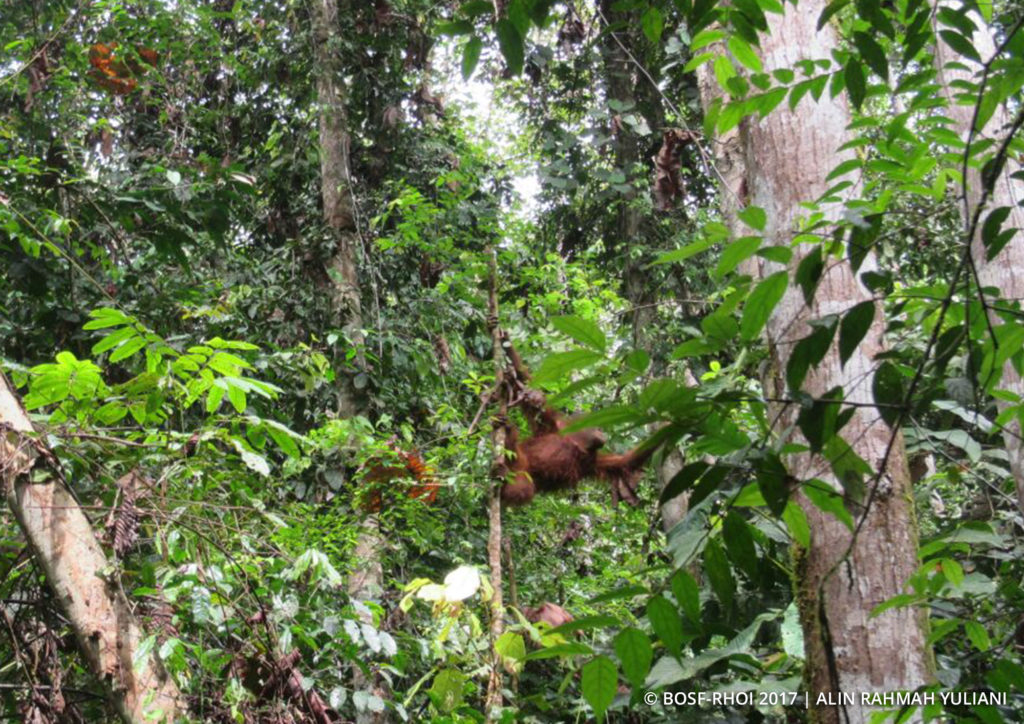 This release is the 14th conducted by the BOS Foundation in the Kehje Sewen Forest, East Kalimantan, since 2012. The total number of rehabilitated orangutans released from Samboja Lestari now stands at 80 individuals.

This year, BOS Foundation has concentrated on working to free the orangutans in its care, at both the Samboja Lestari and Nyaru Menteng rehabilitation centres. Every orangutan has the right to live safely in a natural habitat, without human interference; and we will continue to work hard to achieve this for all orangutans.

We are extremely grateful for the support provided by the East Kalimantan BKSDA, the government of East Kalimantan, and those stakeholders committed to the orangutan and habitat conservation effort. We are also grateful for the moral and financial support provided by numerous organizations, individuals, and our partners from all over the world concerned with orangutan conservation in Indonesia.