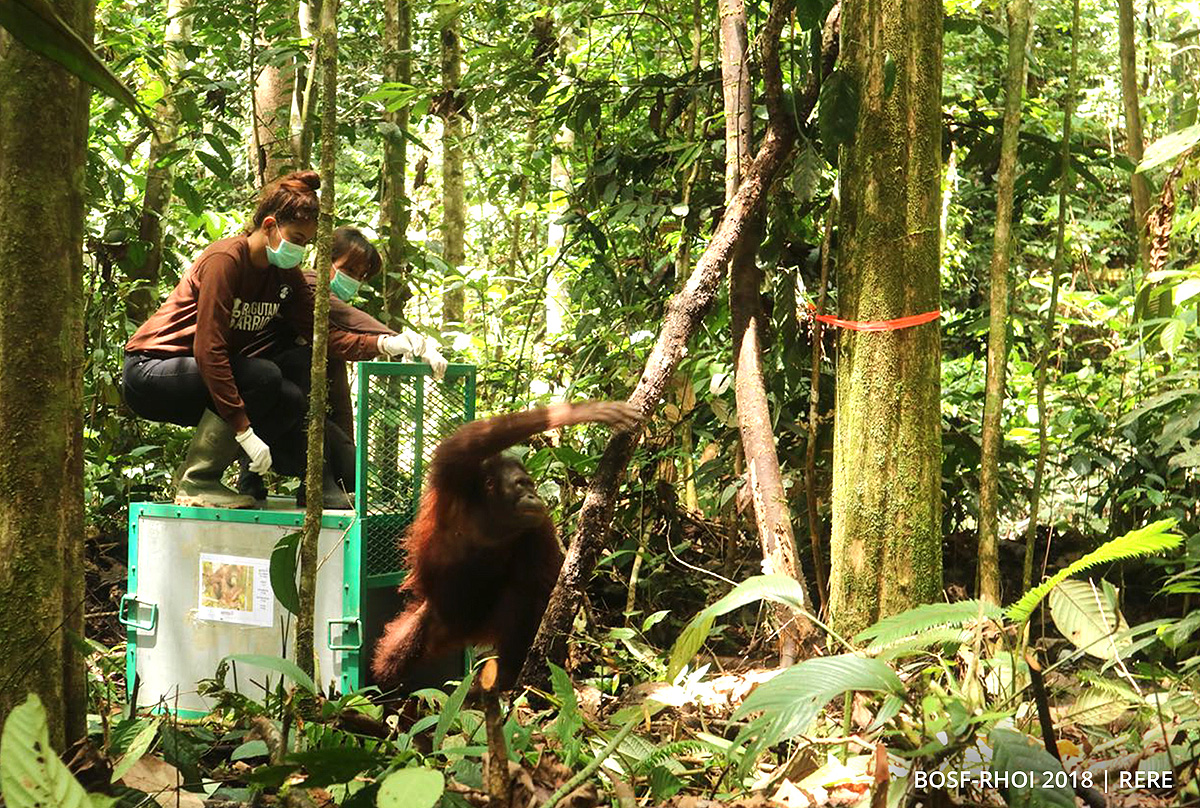 May 4, 2018 — The BOS Foundation—in cooperation with their implementing partner company, PT. RHOI, and the East Kalimantan Natural Resources Conservation Agency (BKSDA)—has released six orangutans to the Kehje Sewen Forest on National Education Day, which falls annually on 2 May. The six orangutans – three males and three females – were transported from two separate locations: Seto and Tinatun were dispatched from the BOS Foundation’s Orangutan Rehabilitation Centre at Samboja Lestari, whilst Arnold, Totti, Derek, and Sakura were taken from Juq Kehje Swen—an area of land we use as a pre-release island through an agreement with the oil palm company, PT. NAS. The two groups converged just outside of Muara Wahau township, and together headed for the Kehje Sewen Forest.

Two days prior to departure, a team made up of technicians and one vet set off for Juq Kehje Swen Island to begin preparations and sedate the four release candidates living there. Arnold was the first to be processed, followed by Derek, then Totti, and finally, Sakura. 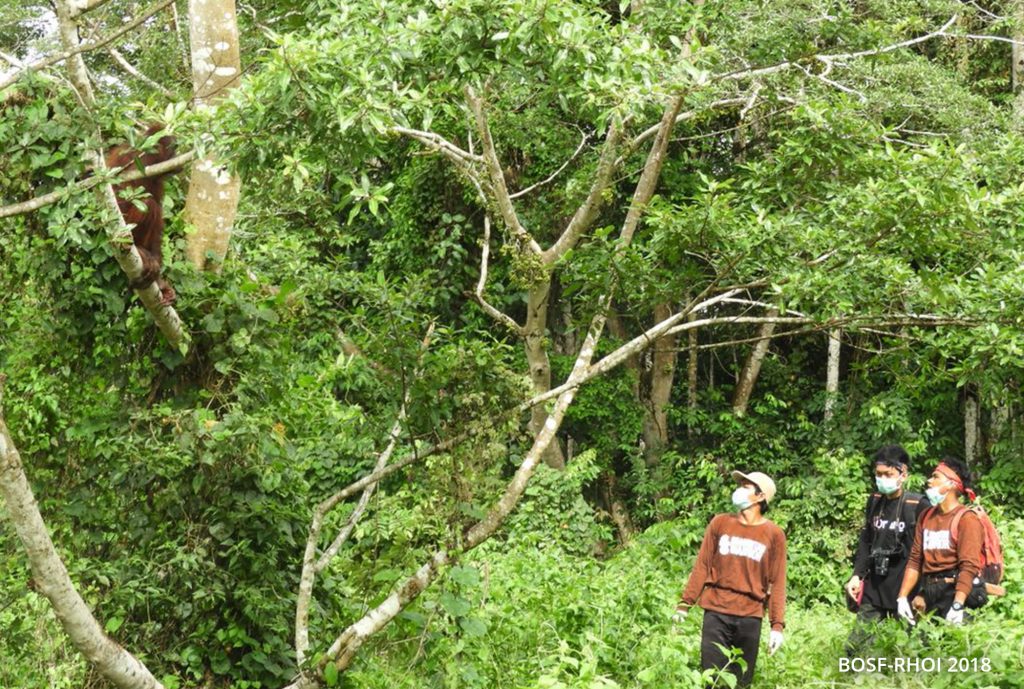 Totti was the most difficult to process of the four: the 13-year-old male was located high up in a tree, making it difficult for us to take aim with the tranquilizing darts. The first shot missed, which gave Totti the chance to climb up even higher in the trees. Seeing no other option, Deni, one of our senior technicians, climbed up a tree and positioned himself to get a better visual and range. He was finally able to shoot a dart at Totti’s right thigh. The drug gradually worked its magic, and Totti soon lost his grip. Down below, our team patiently waited at the ready to catch Totti in a huge net and prevent him from getting injured on his way down. Once he was safely caught, the team checked Totti’s condition and carefully placed him inside a transport cage. 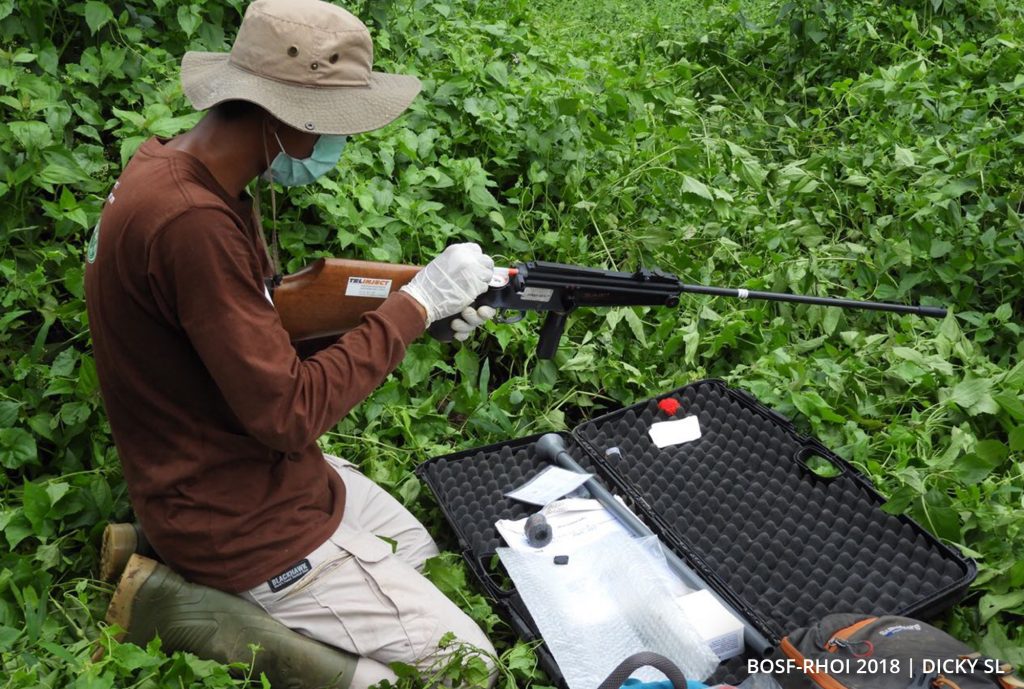 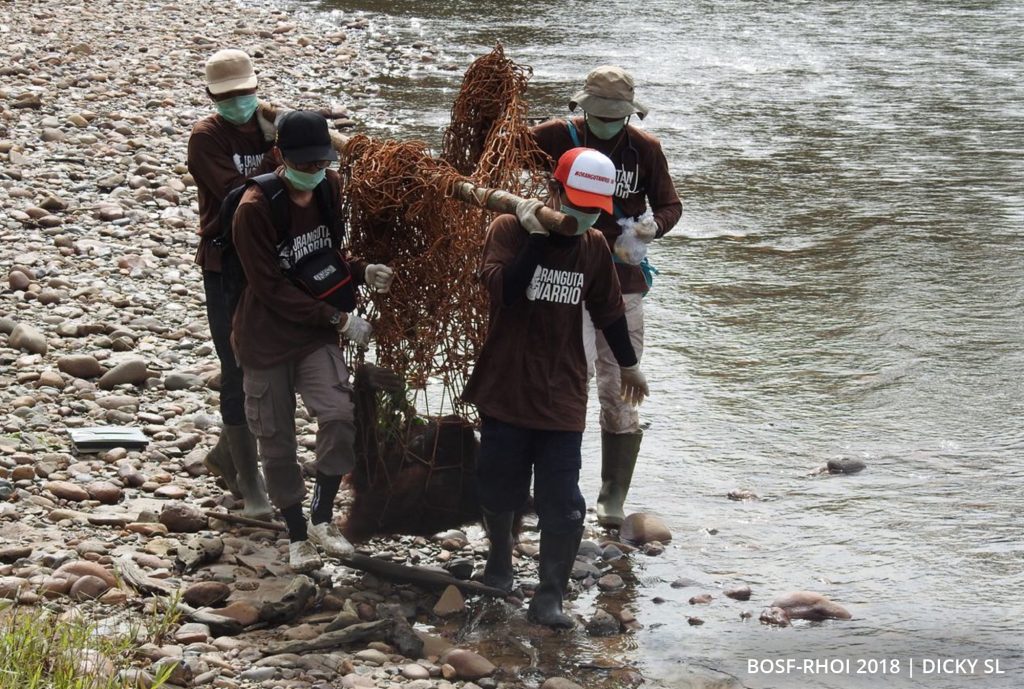 The team sedates and prepares the release candidates

The team placed the four orangutans in large habituation cages, where they waited until the day of travel to the Kehje Sewen.

Journey to the Kehje Sewen Forest

On 2 May, at around noon, the release team transported Tinatun and Seto from Samboja Lestari directly to Muara Wahau, some 10-11 hours away. On the trip, our team made regular stops every two hours to check up on the orangutans. Meanwhile, our team on Juq Kehje Swen Island was busily transferring orangutans from the habituation cages to individual transport cages. 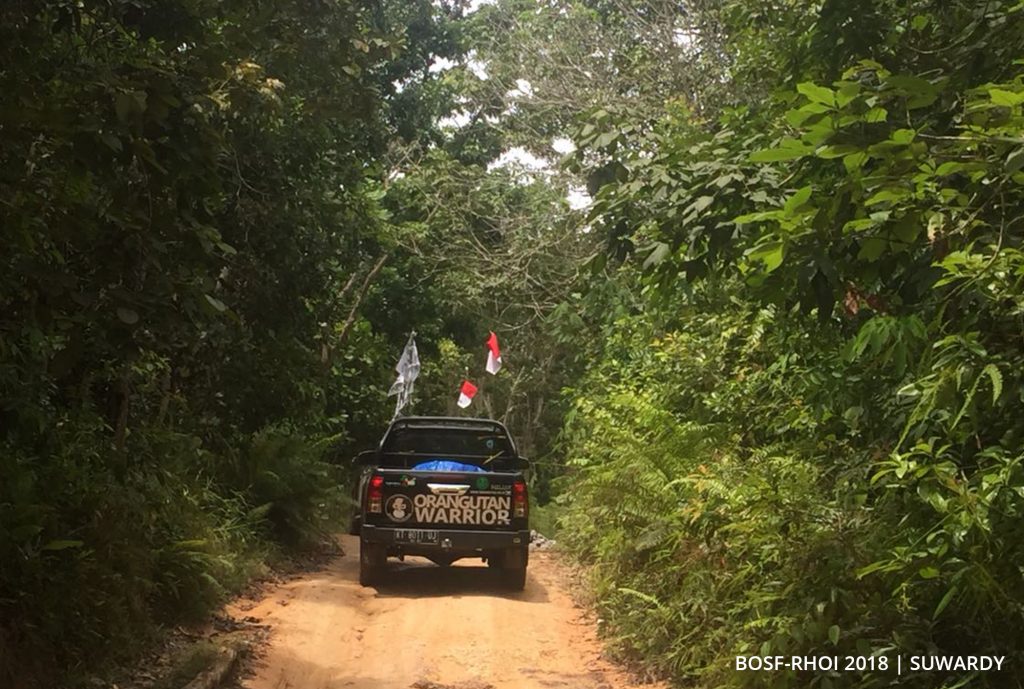 The team departs from the Samboja Lestari Rehabilitation Center

The next morning, the team at Juq Kehje Swen headed off toward the rendezvous point to join the team from Samboja Lestari. After three hours of off-road travel, the team had arrived at the banks of the Telen River. 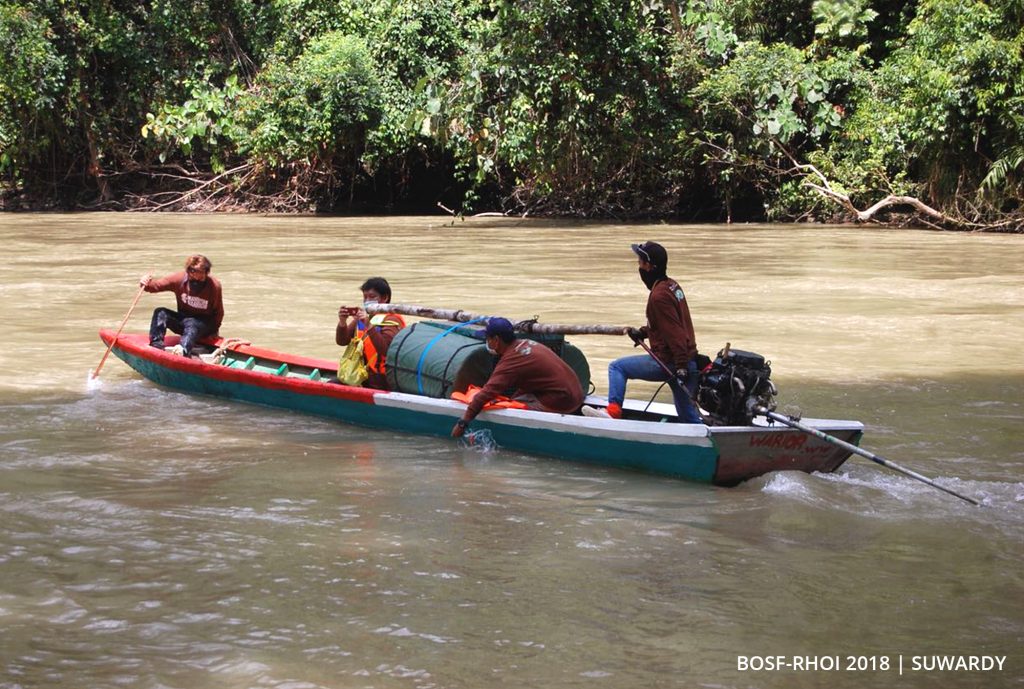 From there, the six transport cages were moved using small boats locally known as ‘ces’. After crossing the river, the six cages were then carried by local, experienced porters straight to the release points.

Freedom for Six Orangutans in the Heart of the Kehje Sewen

At around 11, awareness campaigner Davina Veronica and Miss Indonesia Bunga Jelitha opened Seto’s cage. Seto rushed out, climbed the nearest tree, and with a determined look in her eye headed off into the forest. Arnold, Totti, Tinatun, Derek, and Sakura followed soon after. Their cages were opened by the Head of the East Kalimantan BKSDA, a BOS Foundation vet, two technicians from RHOI, a representative from PT. NAS, and representatives from Oregon Zoo. 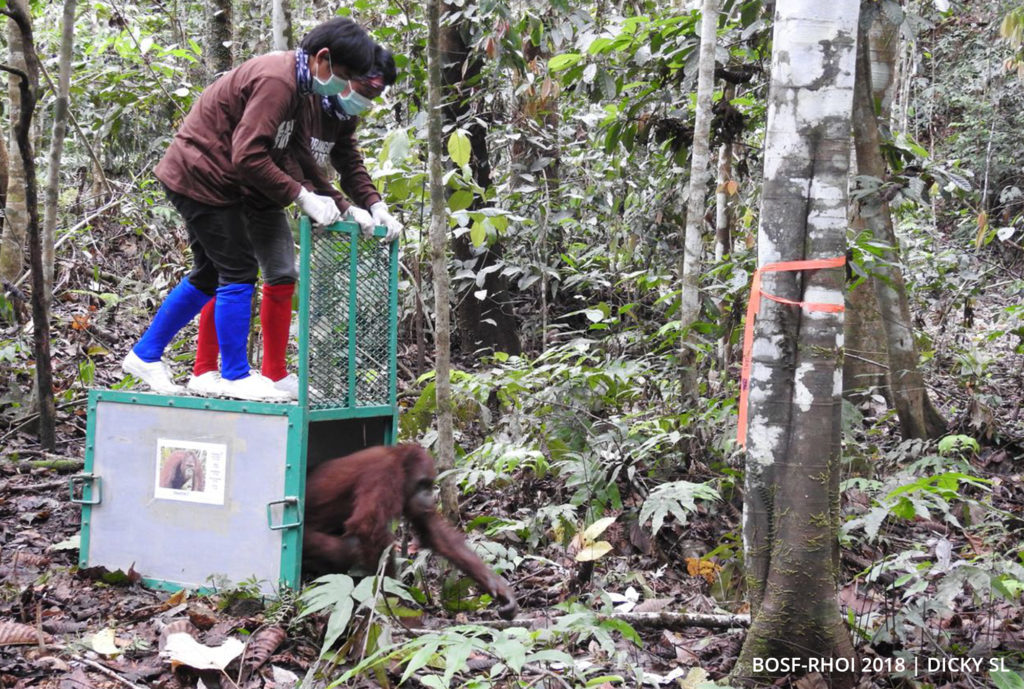 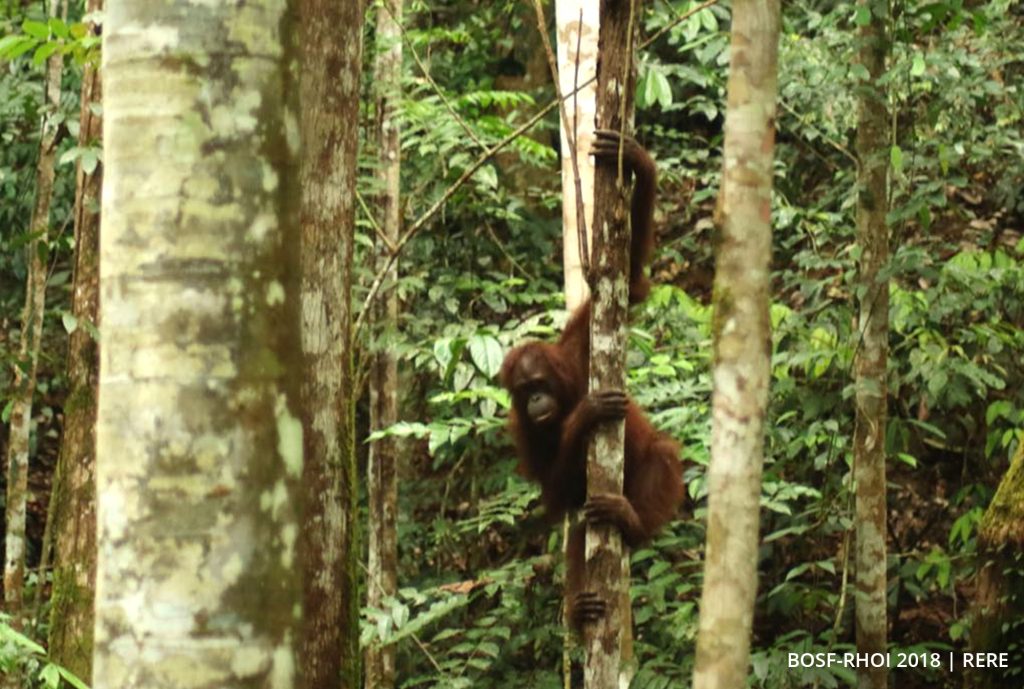 Education for Conservation and Sustainability
This release was particularly special, as it coincided with National Education Day. Education is a vital component of the conservation effort, benefitting both humans and orangutans. Education is central to BOS Foundation’s activities. Our education on orangutan behaviour allows us to ‘educate’ young orangutans how to survive in the wild!

We also strive to educate people all over the world on the plight of the orangutan and the difficulties involved in our efforts to save them. Education is the key to understanding how people can sustainably live alongside orangutans and their forest habitat. We hope that these efforts can slow, and eventually even stop, the unsustainable use of Indonesia’s wonderful natural resources.

To ensure these six orangutans adapt well to their new environment, our Post-Release Monitoring team will closely monitor their development for seven days after their release. We hope all six orangutans are enjoying their new-found freedom!