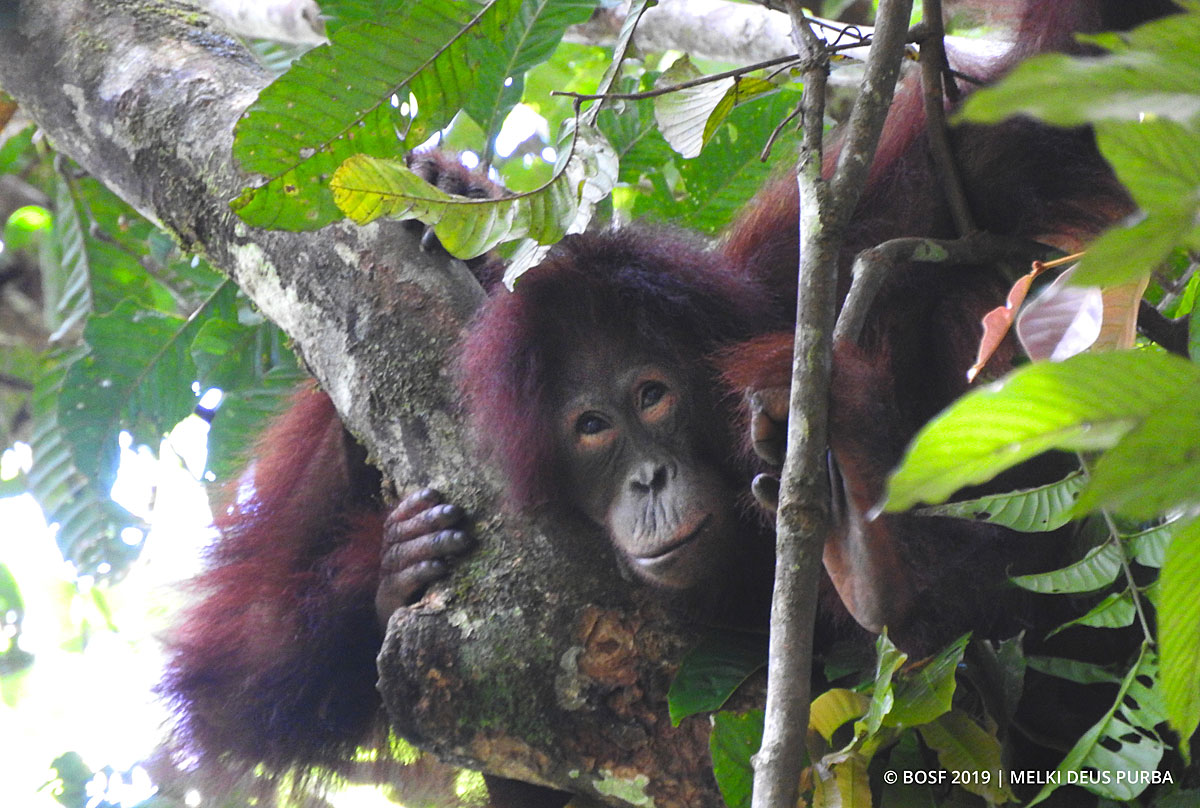 October 30, 2019 — “Stop over there, bro,” I directed Otong, our boat driver and member of the Post-Release Monitoring (PRM) team in the Bukit Batikap Protection Forest, Central Kalimantan. We were trying to make our way to the river bank after spotting two orangutans eating fruit in a sangkuang tree, at the entrance of a transect along the Joloi River. Initially we did not recognize the pair, and when we approached we quickly noticed that there was a third orangutan present. As we got even closer, we were finally able to identify the three orangutans – Gadis, Garu, and Galaxy.

Read more about Garu: Garu Show Us All How It's Done

Mother-daughter pair Gadis and Garu were released in the Bukit Batikap Protection Forest in November 2012. Garu, Gadis’ first daughter, was born on BOS Foundation’s Kaja Pre-Release Island on 15 December 2009, and was released alongside her mother when she was three years old. Now, seven years later, Garu is independent and frequently observed unaccompanied by her mother. Meanwhile, mother Gadis has helped to grow the wild orangutan population in the forest with the birth of her second child, Galaxy, earlier this year. 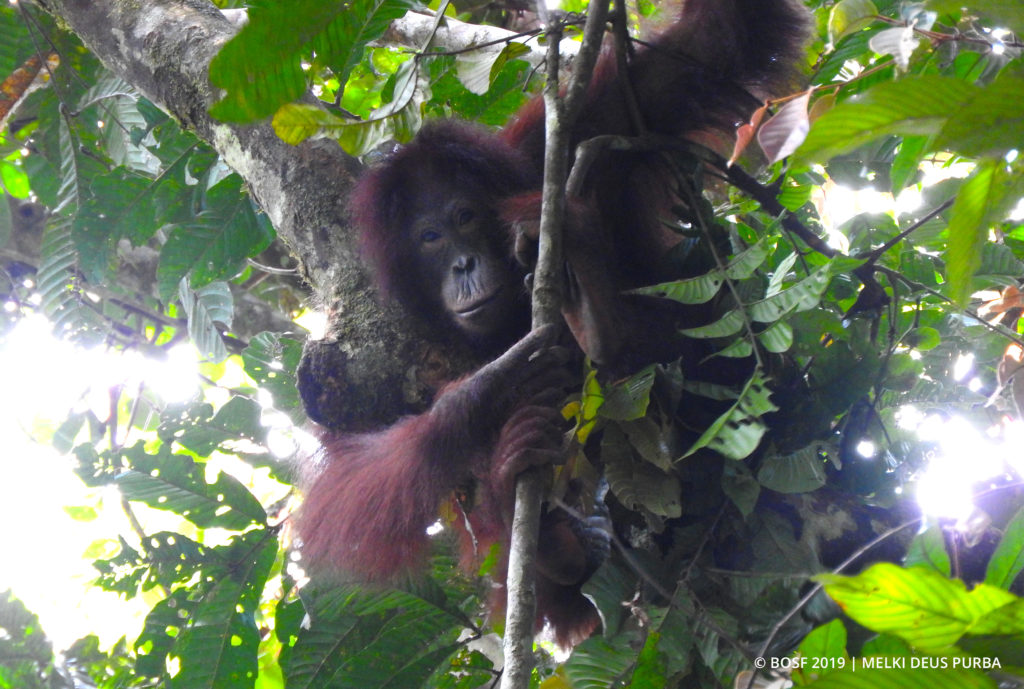 It didn’t take long for ever-alert Garu to notice our presence in the forest. She quickly kiss-squeaked, broke some branches, and threw them in our direction, displaying her displeasure. We had to retreat cautiously, but maintained a visual on the group after hiding behind some bushes. We could not afford to let this moment slip away, for these three orangutans had not been observed for quite some time: Gadis and Galaxy were last seen in February 2019, and Garu had not been spotted since November 2018. We decided to follow and observe the trio with a found-to-nest approach for two consecutive days. 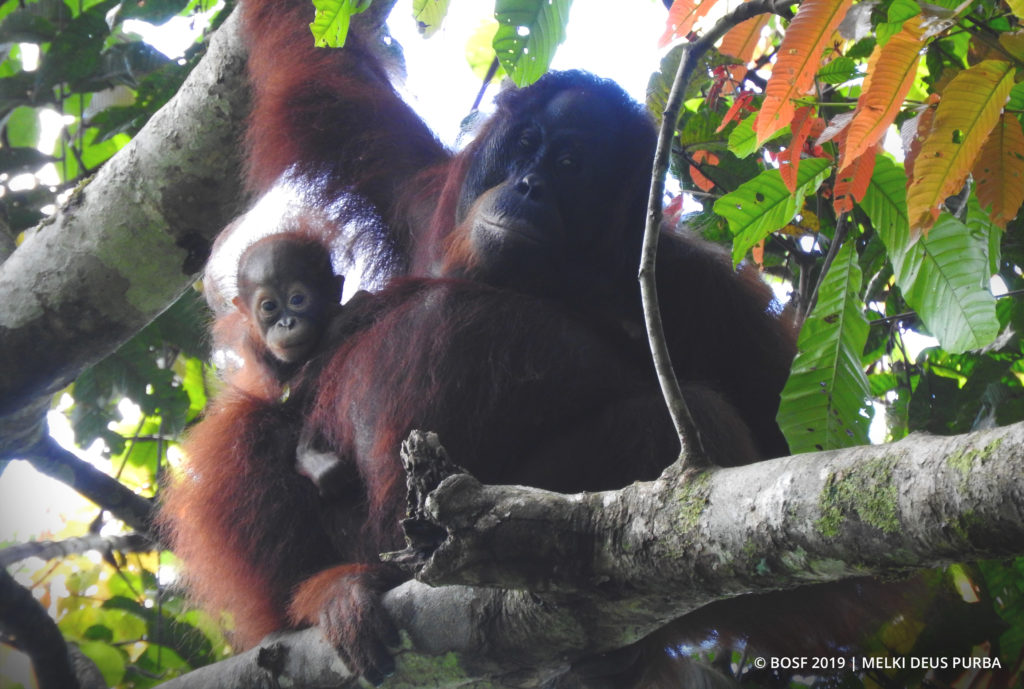 On the first day of observation, Gadis, Garu, and Galaxy spent most of their time up in the trees, eating together. They ate sangkuang fruit, leaf shoots, and ants. Big sister Garu ventured off to explore the forest and forage alone at one point, but soon returned with some food to share with her mother and baby sister. When she spotted us spying on Gadis and Galaxy, she immediately jumped to their defense by kiss-squeaking and shaking the trees. Clearly she had taken it upon herself to be the protector of her mother and sister. As the day turned dark, Garu began to construct her night nest about 40 meters away from mother Gadis’ nest.

In the seven years since the release of Gadis and Garu, the batteries that once activated Gadis’ radio transmitter implant – so that she could be tracked using a radio telemetry receiver – have been fully exhausted. Therefore, on the second day of observation, our PRM team had to head off very early in the morning to catch up with them before they left their nests. Around 5:30 a.m., the trees above their nests began to shake, signaling that they were rousing from their sleep. The first to get up was Garu. She surprised us, as she rose from a nest that was closer to Gadis’ nest than the one she had built the night before! This new nest was not the one we had seen her building 40 meters away. We suspected that she had built this nest closer to her mother’s after we had left the area the evening prior.

Garu kiss-squeaked upon seeing us, and again displayed protective gestures: This time, she sat in front of Gadis’ nest, facing our direction. The disturbance had just become personal! Garu kept a watchful eye on us as we carefully retreated, giving her and her family space.

Shortly after, Gadis and Galaxy rose from their nest, and the three ate breakfast together. Now, Garu was even more vigilant and protective than the day before. She positioned herself behind Gadis and Galaxy, while keeping a constant watch on us. She occasionally kiss-squeaked and threw twigs in our direction, warning us to keep our distance. Mother Gadis shared the same sentiment, and used her body to block our view of baby Galaxy. What an amazing family!

Garu, the sub-adult female of the group, had displayed excellent, instinctive and protective behaviours. She proved that she would do anything to defend her family in the presence of a perceived threat.

We hope that this small family will continue to thrive in the Bukit Batikap Protection Forest, a place where orangutans can live wild and free. Gadis, her two daughters, and all the other reintroduced orangutans in Batikap play an important role as a keystone species – helping the forest regenerate through seed dispersal and, in turn, ensuring the survival of future generations of orangutans.