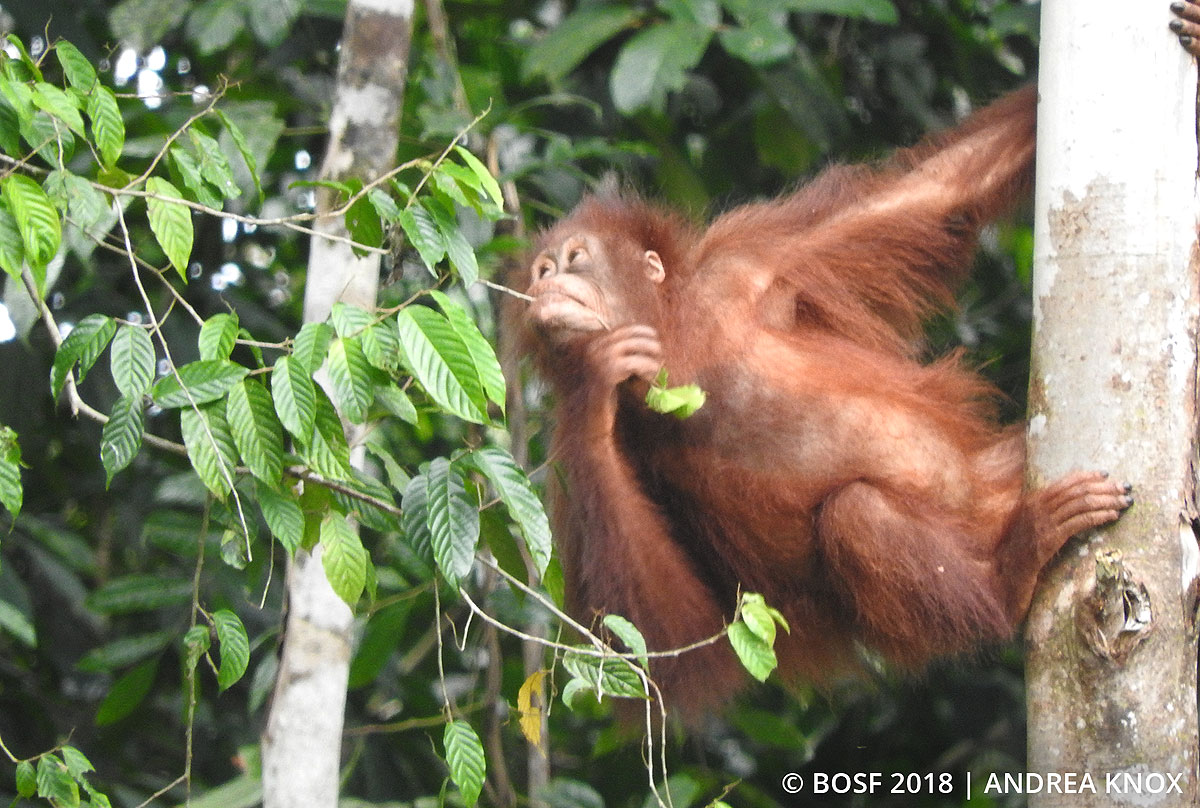 November 21, 2018 — Living in Camp Totat Jalu, located in the middle of the Bukit Batikap Protection Forest, definitely has its perks; the exotic wildlife sightings, the consistently warm weather, and the commute to work that involves cruising down a river instead of bumper-to-bumper on a road. As if Mother Nature wanted to balance everything out, there are also the disadvantages; swarms of mosquitos that descend like clockwork every afternoon, getting soaked by torrential downpours, and being constantly on the lookout for orangutan intruders around camp.

Most of the orangutans keep to themselves in the forest and prefer to spend their days devouring the delicious fruits and other delicacies that nature has to offer. There are a few orangutans, however, who have travelled a great distance and end up visiting the camp by chance. These individuals are usually the bravest of the brave. But, sometimes we are surprised by a different kind of visitor – like 9-year-old Lamar. 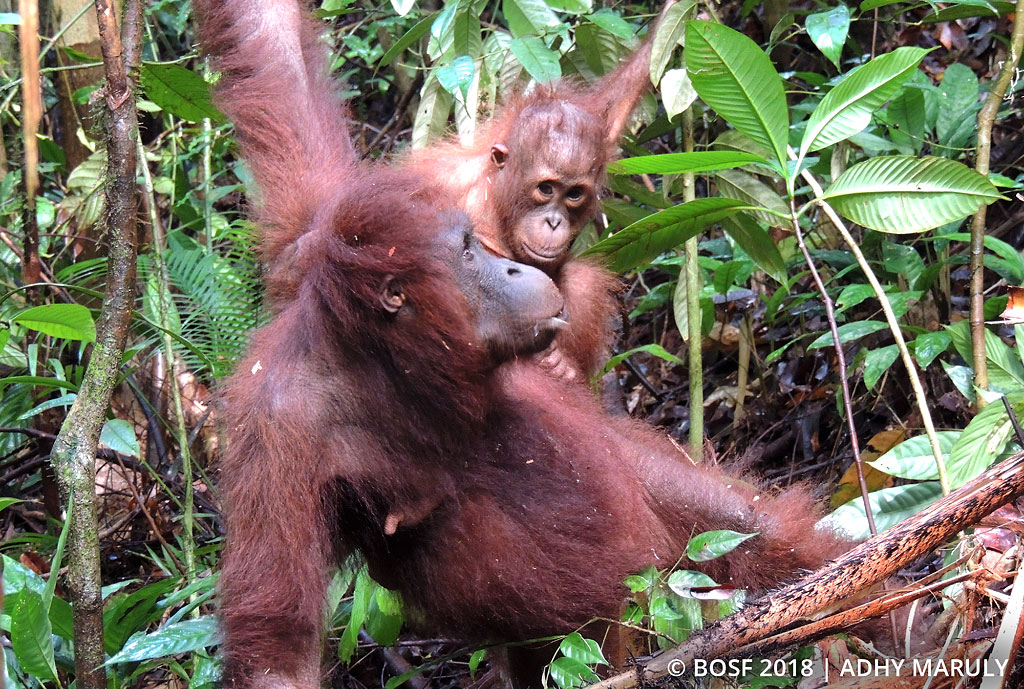 Lamar was released to the Bukit Batikap Protection Forest in 2012, alongside his mother, Leonora. Sadly, Leonora met a premature death in the forest, leaving Lamar to fend for himself at the tender age of five years. Lamar, a determined survivor, then spent time with some older females and managed to nourish himself with his sound foraging skills.

While Lamar has shown no fear of exploring deep into the forest on his own, he, like many wild orangutans, is terrified of humans. Whenever we stumbled across him during patrols in the forest, he would immediately kiss-squeak to voice his displeasure and stay as high up in the trees as he could. 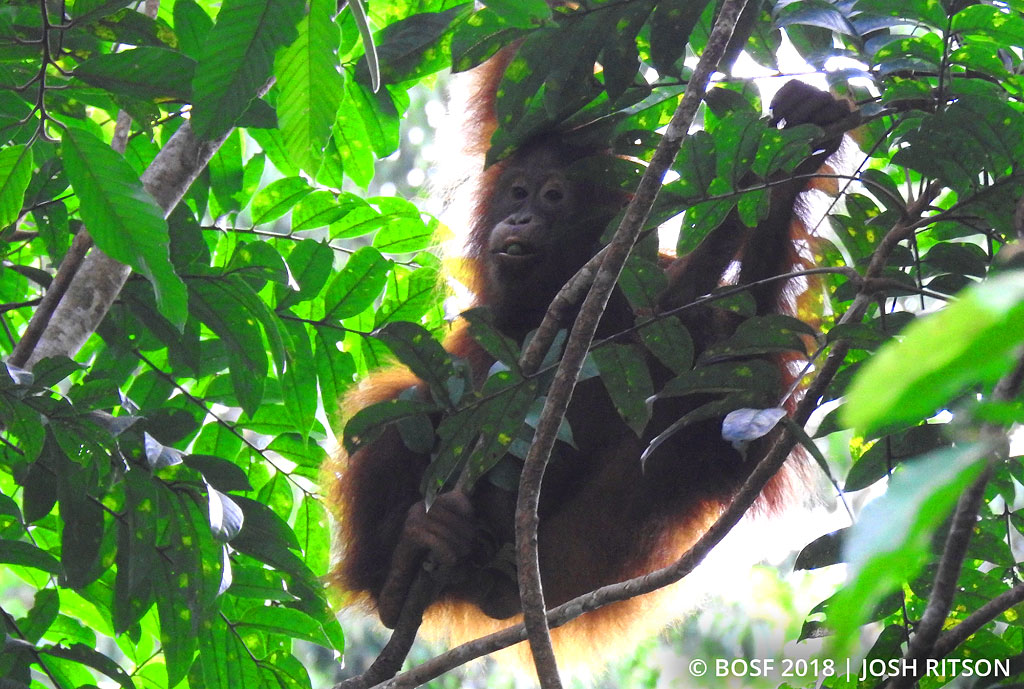 It was late in the afternoon, following an unsuccessful day of searching for orangutans, when the post-release monitoring (PRM) team returned to camp. I had retreated to my room to work, when I suddenly heard an eruption of kiss-squeaks coming from outside – a sound I had never before heard around camp. I set out to investigate the source, and at the edge of camp saw a thicket of rattan shaking and kiss-squeaking. How odd!

Then, out of the bush emerged tiny Lamar, clearly irritated at the sight of me. I looked around, but there were no other people visible. Lamar had walked right up to the camp to kiss-squeak at the structure. Ordinarily, when an orangutan is uncomfortable with our presence in the forest, we back off to reduce their distress; but here, Lamar was willingly stepping into a human-inhabited area.

Due to Lamar’s fear of humans, I expected he would move off quickly, but I was wrong! Lamar’s visit to camp stretched over a few days, and he continued to bombard us with his chorus of kiss-squeaks the entire time. It was quite the head-scratcher – why was Lamar putting himself through this obviously stressful experience? I learned the answer to my question when I stayed back at camp one day to catch up on paperwork and keep an eye on our persistent visitor.

I was sitting in our common space typing up a report when I noticed Lamar eyeing me from the rattan thicket. I didn’t pay him much mind and continued with my work. Without making a noise he slowly crawled out of the thicket, as careful and deliberate as a prowling cat. With every controlled step he inched closer to camp on all fours. Suddenly, I heard a loud snap and looked up to see Lamar frantically running away with an armful of papaya branches! Once he was safely hidden back among the rattan thicket, he sat down to enjoy his spoils. 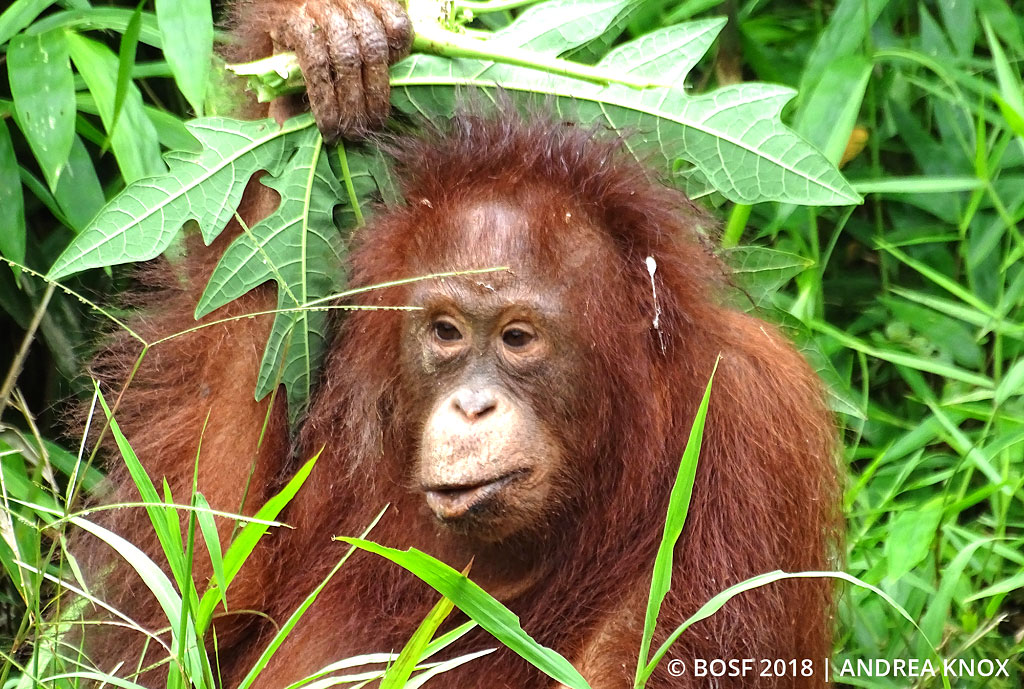 There are three small papaya saplings nearby camp that orangutans go absolutely nuts for! Orangutans will eat every part of the papaya tree: I have even witnessed adult orangutans snapping papaya trunks and eating the wood! Lamar had obviously decided that it was worth braving a human settlement if it meant he could get a fill of some delicious papaya leaves!

Once Lamar had exhausted the camp’s papaya leaves, he moved on. We were happy to see him return to the forest, where there are no scary human camps. He did, however, enjoy some of the luxuries of a human settlement, as he boldly used our rope bridge to swing away over the river and back to his forest home. How cheeky!