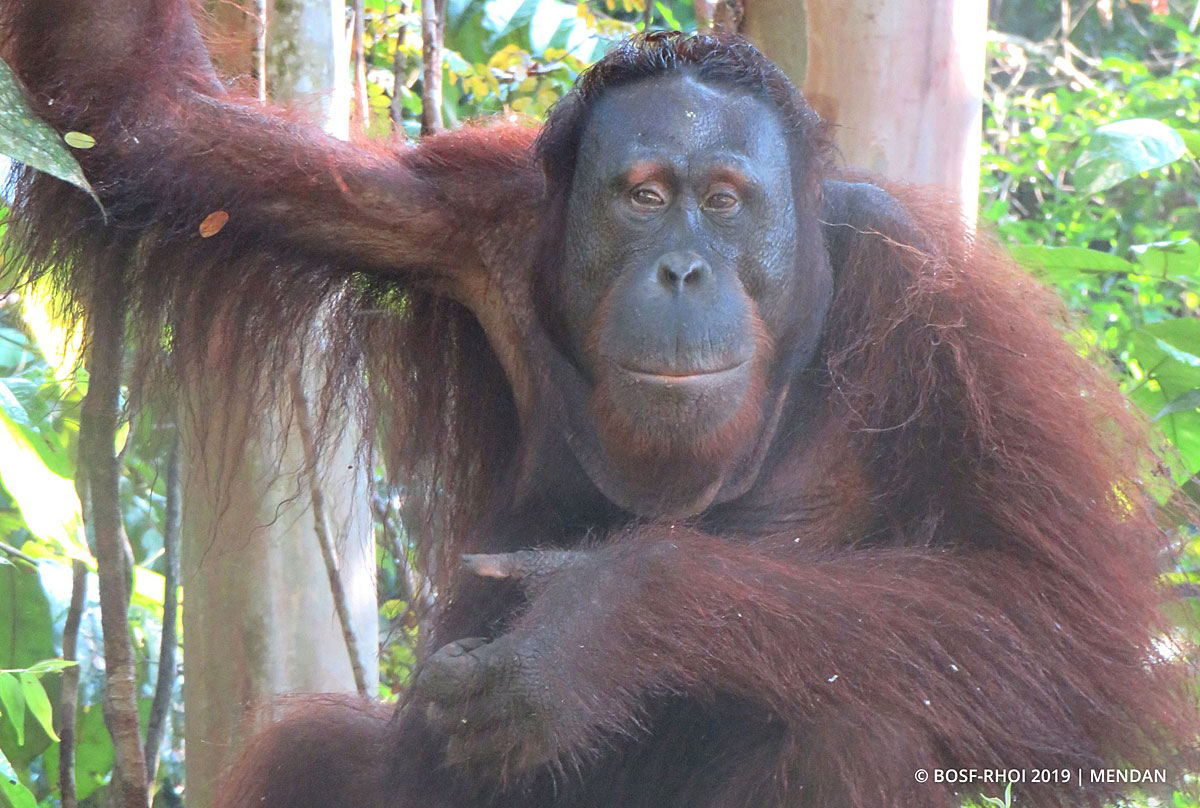 19 June 2019 — The warmth of morning sunshine was a welcome change for the Post-Release Monitoring (PRM) team in the Kehje Sewen Forest, as regular rainfall had flushed the forest over the months. Orangutans generally do not venture far to explore when it rains, so the PRM team knew that this clear, sunny day would offer a better chance of observing orangutans out and about in the forest.

On this occasion, the team had set out to observe Justin, whose signal had been detected just a few days prior. However, on this day his whereabouts remained a mystery. Our team walked towards the hillside on Transect 1, the last known location of Justin’s signal. The PRM team climbed the steep hill and suddenly spotted some movements in the canopy: It was Justin! The team was thrilled to have found him so quickly.

Justin had arrived at the BOS Foundation’s Samboja Lestari Orangutan Rehabilitation Centre at the end of 2013. Prior to this, he had been kept illegally as a pet by a resident of Balikpapan for three years, and was rescued by the BKSDA Tenggarong before being handed over to Samboja Lestari. He was only four years old at the time and still had the opportunity to learn vital survival skills in Forest School. With the guidance of our technicians and dedicated babysitters, Justin worked hard in Forest School and became one of the most successful students. After proving he had the skills and know-how to survive alone in the forest, Justin was released to the Kehje Sewen Forest in April 2017.

Justin was very active throughout the day’s observations and continued to move from tree to tree while snacking on the various natural foods he found along the way. Our PRM team members had to climb hills and descend slopes to just follow Justin and monitor his activities. His quick, agile movements forced our PRM team members to speed up their pace in order to keep up with him.

While brachiating through the trees, Justin suddenly stopped what he was doing and climbed down to the forest floor. This sudden change in movement surprised the PRM team members, who hid as fast as they could. Justin, still unaware of the team’s presence, continued to explore the forest floor as he plucked and savored plant shoots.

After a satisfying meal, Justin moved quickly toward a steep slope, making it difficult for the PRM team to follow him as he moved out of sight. The team searched for Justin, but after two hours it was clear that he was well and truly gone. The team decided to end the patrol for the day and return to Nles Mamse Camp to rest.

Despite losing track of Justin, the PRM team was delighted to have spent a few hours traveling with him through the forest and observing his activities. Observation data indicates that Justin is currently in good health and has adapted well to life in the wild!