25 February 2016 — As their rainforest habitat continues to be destroyed, increasing numbers of orphaned and displaced orangutans are taken to rehabilitation centers on Borneo and Sumatra. Often with the support of Orangutan Outreach, staff at these centers work tirelessly to rehabilitate these orangutans for eventual reintroduction to the wild. In a new study published today in the journal, Scientific Reports, Dr Graham L Banes and colleagues show that these centers can unintentionally mix orangutans from different geographic subpopulations, which would not naturally co-exist in the wild. At Camp Leakey in Tanjung Puting National Park, where more than 90 orangutans were released from 1971 to 1985, at least two individuals of the ‘wrong’ subspecies were unintentionally reintroduced into the ‘wrong’ place. Here, Graham explains how these females have prolifically inter-bred with the wild population, producing hybridized orangutans with a ‘cocktail’ of genes from different orangutan subspecies. Graham’s continued studies of orangutan genetics were recently supported by a grant from Orangutan Outreach.

Orangutan Outreach members will not be surprised by the reminder that orangutans comprise two distinct species, found exclusively in the wild on the islands of Borneo (Pongo pygmaeus) and Sumatra (Pongo abelii). Though they might look similar, these orangutans probably diverged around 400,000 years ago, and have thus evolved into two separate species with very different genetic characteristics. In zoos around the world, these species are managed as two independent populations: which is why, if you visit your local zoo, you’ll probably only see either Bornean or Sumatran orangutans. By keeping these species separate, we preserve the unique characteristics of each. Because the species have been isolated for so many thousands of years, we also avoid potential health and reproductive problems that could arise if we inter-breed them.

Many people aren’t aware of the considerable variation within each species, however. At present, the Bornean orangutan is divided into three distinct subspecies, all of which are genetically and geographically isolated, and last shared a common ancestor around 176,000 years ago. Over the last 80,000 years, they have especially changed, becoming more and more different from each other. These subspecies can now be found on different parts of the island: Pongo pygmaeus wurmbii in the south, Pongo pygmaeus pygmaeus in the west, and Pongo pygmaeus morio in the east. 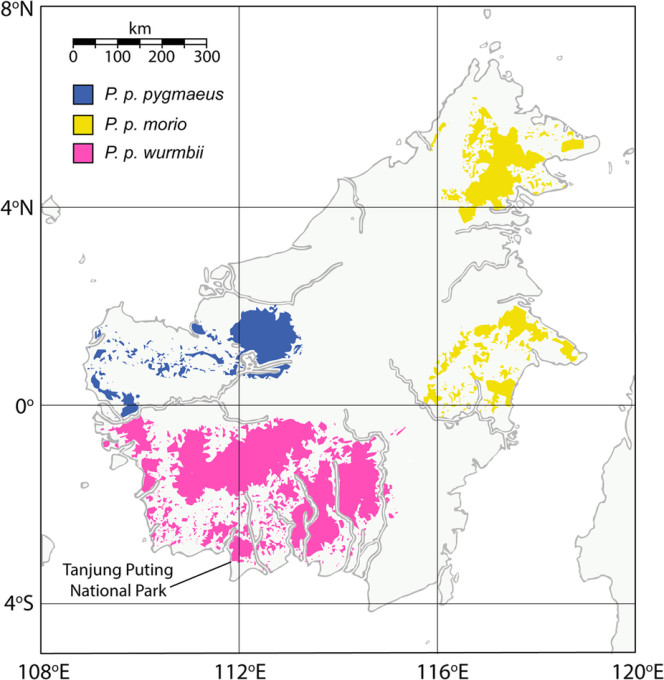 When Biruté Galdikas and Rod Brindamour started their pioneering orangutan rehabilitation program in Tanjung Puting National Park – home to a wild population of Pongo pygmaeus wurmbii – they had no idea that Bornean orangutans included three distinct subspecies. In fact, nobody did: at that time, there was still debate as to whether or not Bornean and Sumatran orangutans were even that different. Over 14 years, they rescued and reintroduced more than 90 orangutans at Camp Leakey, their research and rehabilitation site in the National Park. Many of these individuals survived, inter-bred with the wild population, and went on to have their own generations of healthy offspring.

Using genetic analyses and 44 years of data from Camp Leakey, we’ve now been able to determine the minimum extent to which they released non-native subspecies into the National Park. We found that Rani and Siswoyo, two females that were rescued from the pet trade, had originally been captured from the west of Borneo, and thus were of the subspecies Pongo pygmaeus pygmaeus. Since their release, they have both inter-bred prolifically with males of the local subspecies, Pongo pygmaeus wurmbii, producing at least 22 hybridized descendants to date. As shown in the illustration below, these offspring have inherited a ‘cocktail’ of genes that could not normally occur in the wild.

There’s an old adage that “opposites attract” – and indeed, offspring born to genetically distinct parents can sometimes benefit from the variety of genes they inherit. This is called ‘hybrid vigor’, and it may help to explain why Rani enjoyed the greatest reproductive success of any female at the site. Rani now has at least 14 descendants over three generations of offspring. Though two died in infancy, the remainder are presumed to be alive and none are known to have required any veterinary interventions. However, being born to parents that are too different could have the opposite effect: when different genes that have evolved separately over many years suddenly come together, they may have independently changed so much that they’re no longer compatible with each other. We call this ‘outbreeding depression’, and it may explain why Siswoyo’s reproductive success was the worst of any female at Camp Leakey. Siswoyo had only five first-generation and three second-generation offspring. Two of her offspring died in infancy, while infection following the latter pregnancy resulted in Siswoyo’s own death ten days after the birth. Her only daughter, Siswi, produced a stillborn offspring, a daughter that died in infancy, and a son that often needed medical interventions. Siswi herself has frequently required veterinary care, including major surgery to treat a perforated intestine.

We can’t draw any firm conclusions from these findings, and especially not with a sample size of two. Perhaps neither hybrid vigor nor outbreeding depression are to blame; maybe it’s all just a coincidence: but our findings are enough to cause serious alarm. Bornean orangutans have been divided into these subspecies for tens of thousands of years; they could never normally co-exist in the wild. By bringing them together again, we’re essentially playing God. We don’t know for sure what the consequences will be, but our findings from Camp Leakey suggest we sit up and take notice. Once we reintroduce the ‘wrong’ orangutan into the ‘wrong’ place, we can never take that back: especially not once they've reproduced. Rani and Siswoyo’s descendants continue to increase in number, and – as both gave birth to males who have since dispersed and probably fathered offspring – it’s reasonable to assume that there are many more than just 22.

Fortunately, it’s against Indonesian law at the moment to reintroduce orangutans of different subspecies into the ‘wrong’ geographic areas. However, it’s very difficult to do the required genetic tests in the country – they’re expensive, they’re tough to perform, and there’s a lack of experienced laboratories that are able to pull it off. Rehabilitation centers are also desperately short of funds, and if it’s a toss-up between feeding an orangutan or paying for a genetic test, I’d obviously opt for the food as well. Yet increasing numbers of orphaned and displaced orangutans continue to flood into these centers, and with a limited number of suitable release sites, some have encouraged that we mix all Bornean orangutans and release them into ‘cocktail’ populations. It’s suggested to be a perfectly acceptable solution, as long as these ‘cocktail’ groups are isolated from wild orangutans. Then, even if outbreeding depression takes hold, they won’t threaten the viability of natural populations. But then what’s the point? In my opinion, a reintroduction is only successful if these animals can survive, reproduce, and have their own generations of healthy and independent offspring. If we engineer a ‘cocktail’ population that later succumbs to poor health and reproductive success, perhaps eventually becoming unviable or even extinct, all we’ve achieved is short-term welfare.

I am the first to support orangutan rehabilitation and I feel strongly that welfare is the least we can do for orphaned and displaced animals. As humans, we are responsible for their situation, and we have a moral and ethical responsibility to make their lives the best they can be. But we don't need to compromise, and I think the solution is simple: genetically test orangutans, and reintroduce them to the areas from which they came. Until we can know for certain that there are no ill effects from hybridizing distinct orangutan subspecies, we absolutely must keep them separate. In a hundred years, I’d like people to look back on reintroduction as a responsible and successful strategy that helped to save these species. If we overlook the details, and rush to reintroduce, our legacy may be the opposite: an uninformed and ill-conceived effort that threatened the viability of already endangered populations.

In the meantime, we’re working hard to determine if inter-breeding orangutans of distinct subspecies has any ill effects on a broader scale. In particular, we’re working in collaboration with more than a hundred zoos around the world to collect genetic samples from their Bornean orangutans. In zoos, these distinct subspecies have been indiscriminately inter-bred for decades – and most orangutans in zoological collections are probably ‘cocktail’ to some degree. By analyzing their genetic make-up alongside health, reproductive and necropsy records, we’re beginning to gain a broader idea of the effects that ‘cocktail’ genes might cause. This work is part of our broader effort to study the genetics of orangutans in zoos, titled The Orangutan Conservation Genetics Project. This project is a partner program of the World Association of Zoos and Aquariums. 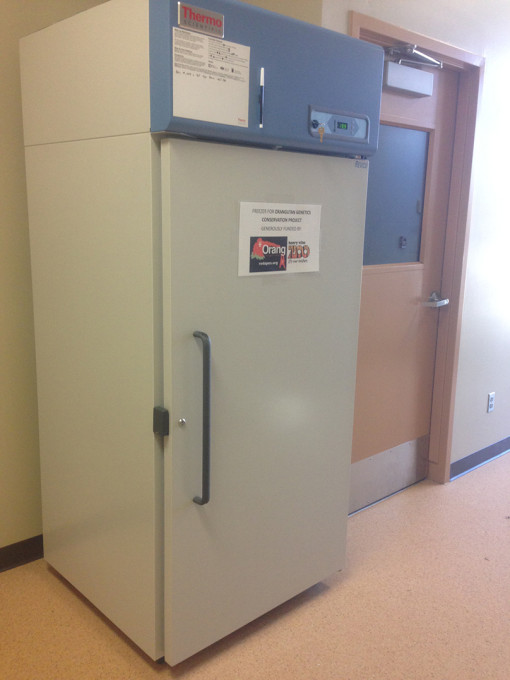 Our study won’t be finished for quite some time, but it almost ended abruptly. In the fall of 2014, we experienced a major freezer failure in our laboratory at Henry Vilas Zoo in Madison, WI, the North American headquarters of the The Orangutan Conservation Genetics Project. For a few horrifying hours, we watched our ultra-low freezers warm up to room temperature, threatening the viability of thousands of orangutan genetic samples from all over the world – including fecal samples from the orangutans at Camp Leakey. Fortunately, Richard Zimmerman of Orangutan Outreach responded to our emergency appeal, and contributed half the cost of a new ultra-low freezer for our samples. The Henry Vilas Zoological Foundation matched the grant, and our samples – and study – are safe as a result. Our work now continues with the support of Orangutan Outreach, and I’ll look forward to updating readers when our study yields results.

Dr Graham L Banes is a Postdoctoral Fellow of the Chinese Academy of Sciences at CAS-MPG Partner Institute for Computational Biology in Shanghai, a Postdoctoral Scientist at Germany's Max Planck Institute for Evolutionary Anthropology, an Adjunct Professor in the School of Veterinary Medicine at the University of Wisconsin-Madison, and a research associate at Madison's Henry Vilas Zoo. His studies of wild and ex-captive orangutans are now in their tenth year.