Checking in with the Rescued Orangutans from 2021

Every year, the BOS Foundation's two Orangutan Rehabilitation Centres - Nyaru Menteng and Samboja Lestari - take in rescued, orphaned orangutans. These orangutans must undergo a long rehabilitation process, spanning several years, before they are considered ready for release into a secure, natural forest. In 2021, the BOS Foundation welcomed several new orangutans and we thought it was time to check in with them! 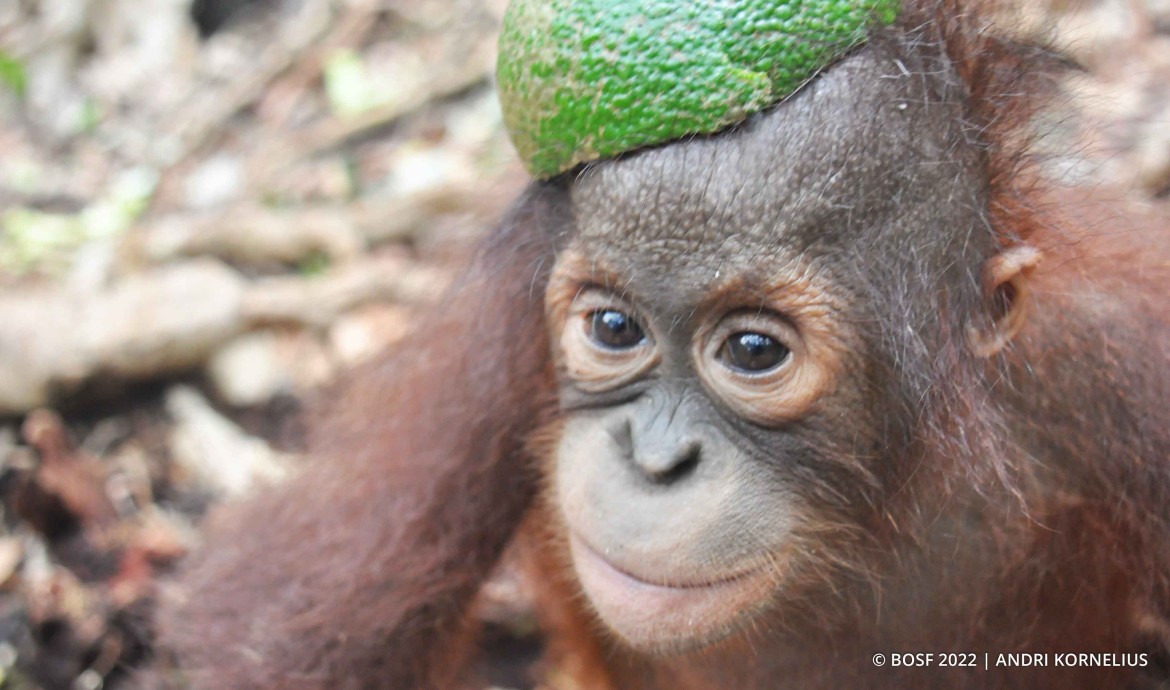 Ramangai was rescued from Tumbang Hiran village in Marikit District, Katingan Regency, Central Kalimantan, on March 2, 2021. At the time, he was 6.5 months old and weighed 2.6 kg. He arrived at the centre with dry scars on his left arm and right lower thigh, and the skin on his fingers was peeling. Ramangai was also severely dehydrated that he presented with a fever, had dull hair, and was too weak to move.

Ramangai’s independence and confidence has since grown, and he is now confident enough to explore, play, and climb trees that are not too high all by himself.

Ramangai is regularly monitored and is currently in good health. Now even the occasional fever cannot stop him from exploring Forest School. He loves to play in the many puddles that dot the Forest School area during the rainy season.

We believe Ramangai will continue to develop well through every stage of the rehabilitation process, until it is time for him to return to his true home, the forest. 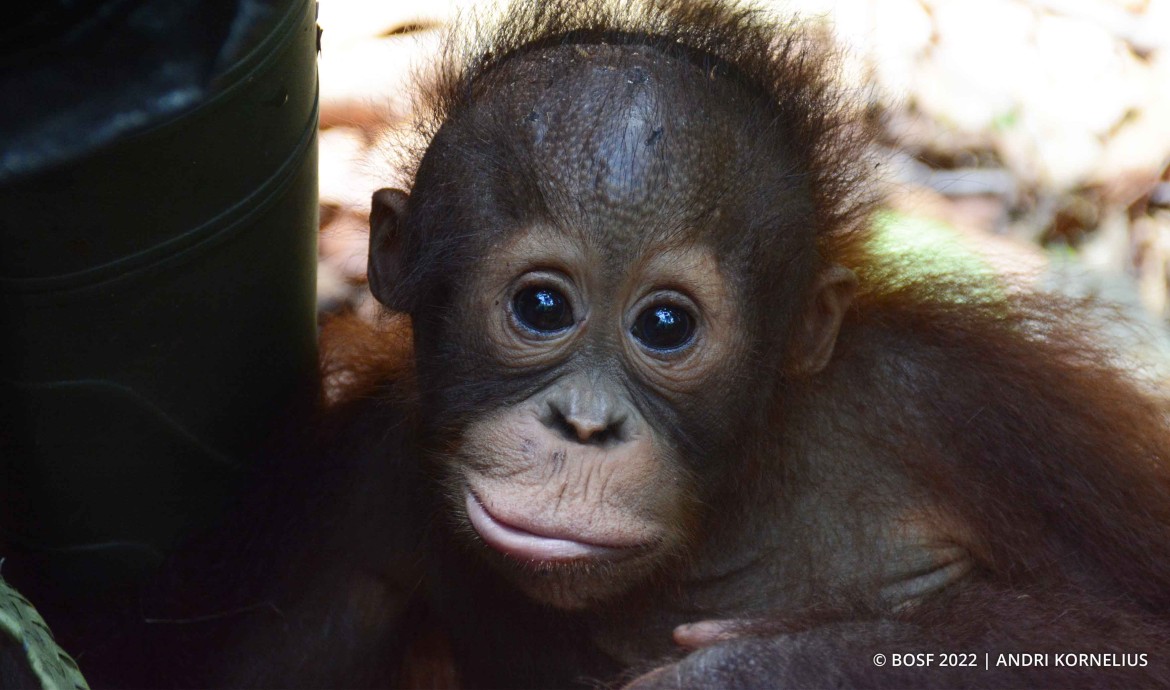 Precious Onyer was surrendered by a resident of Dahian Tambuk village in Mihing Raya District, Gunung Mas Regency, Central Kalimantan. At the time of his handover to the BKSDA wildlife rescue team, Onyer was 8 months old and weighed 2.25 kg.

The resident claimed that he had found Onyer alone, without a mother, at a gold mine site on his way home from work, on January 19, 2021. The resident said took Onyer home and sought a way to inform the relevant authorities. Onyer was handed over to the BKSDA team a little over a month later, on 25 of February.

Today, Onyer is confident, playful, and slightly aggressive. He does not hesitate to attack visiting veterinary or communications staff members, and seems easily distracted by new people. However, when he feels threatened, he will run to a surrogate mother or friend to seek reassurance and a tight hug.

Onyer really likes milk and is slowly learning to climb trees alongside female pal, Aiko. He quite enjoys looking in the camera lens - we have many pictures of him admiring his own reflection! 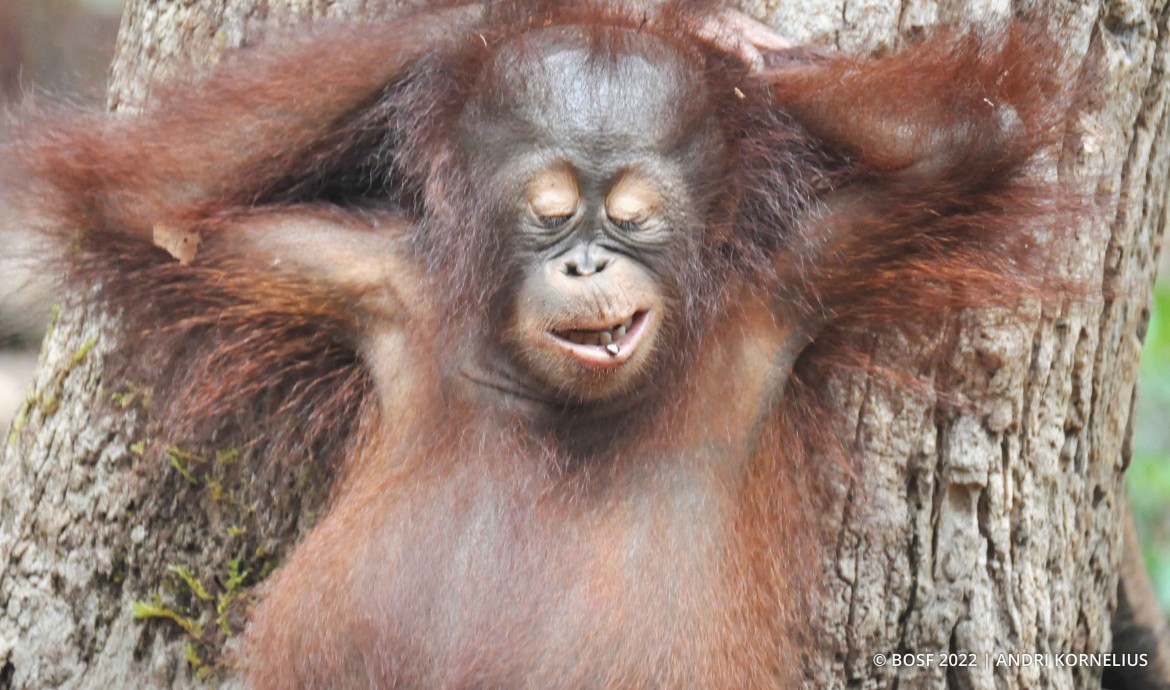 Aiko was handed over by a resident of Muroi village in Kapuas Regency, Central Kalimantan, on March 23, 2021. She looked a bit thin, weighed 2.95 kg, and was estimated to be around 8.5 months old.

According to information offered by the resident, Aiko was found alone in the resident’s garden. The resident suspected that she was separated from her mother after being chased by a dog, because they heard a dog was barking before they found her alone. The resident had treated Aiko before handing her over to the relevant authorities.

Aiko will now actively climb trees and play with others and is currently in good health. She has formed a close friendship with Onyer. Aiko loves drinking milk and will whine to the surrogate mothers for more when she has finished her share.

After eating fruit and drinking milk, Aiko will continue her adventures in the trees. She is already far more skilled at climbing than her peers. She is also independent and good at socializing. Our surrogate mothers are confident that Aiko will be able to complete rehabilitation and one day return to her true home in the jungle. 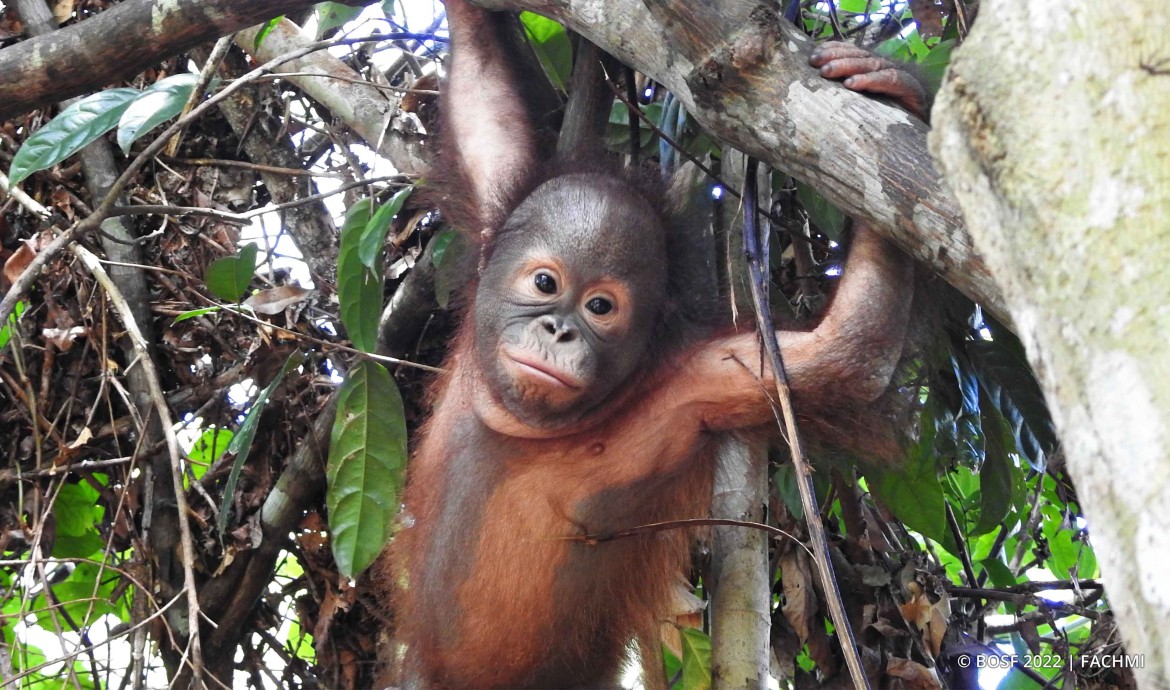 Feruza came from Pondok Labu village in Tabang District, Kutai Kartanegara Regency, East Kalimantan. She was rescued by the East Kalimantan BKSDA wildlife rescue team before being picked up by the BOS Foundation’s Samboja Lestari team on November 24, 2021.

Feruza was allegedly found in the forest by a resident named Rio. He said he had spotted Feruza sitting next to her dead mother, who had perished after becoming trapped in a wild boar snare set by a local villager. Rio initially planned to hand Feruza over to a company located not far from his home. However, he changed his mind and chose to take care of her himself.

Under Rio’s care, Feruza was fed a diet of fruit and canned milk. Rio looked after Feruza for about two months before handing her over to the authorities. Feruza arrived at Samboja Lestari when she was about 12 months old and weighed 4.1 kg. She looked traumatised, with constantly watery eyes and would hug a surrogate mother tightly when she felt scared. When she was placed in a bassinet to sleep, she would cry out.

After four months in the Nursery Group, Feruza now weighs 4.8 kg and has grown into an active individual. She is very smart and likes to climb and move around the trees during her time in Forest School. She usually plays with Ruby, but when she is alone, she likes to eat natural foods, such as leaf shoots and forest fruits. She is already forming good habits and natural behaviours beyond her years. 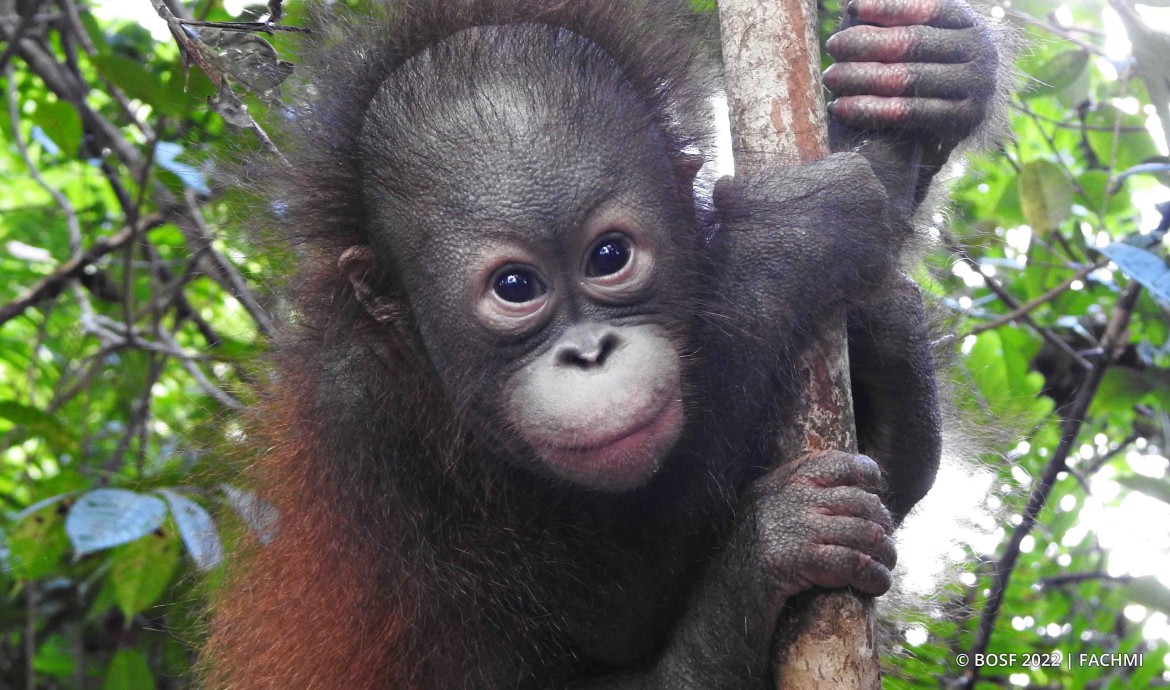 Galaksi came from Bengalon District, East Kutai Regency, East Kalimantan, where he was rescued by a wildlife team from the Tenggarong BKSDA, in East Kalimantan. Allegedly Galaksi was found alone in a forest, adjacent to a highway.

Galaksi was held for a night by Herman, a local resident. Luckily, Herman was aware that it is illegal to keep an orangutan, thus he quickly informed the local authorities that he had a baby orangutan in his possession.

Galaksi was taken to Samboja Lestari at midnight on August 9, 2021, in a transport cage meant for cats. Upon his arrival, he was immediately picked up by a surrogate mother and taken to the Baby House. Our veterinary team examined him and he was given milk. Galaksi weighed only 2.4 kg at the time and was around 7 months old. He looked thin, but was found to have no injuries on his body.

After seven months of care in the nursery, Galaksi’s weight has increased by 6.5 kg to 8.9 kg! He never misses the chance to drink milk and savours every last drop. Galaksi also loves fruits like dragon fruit and bananas.

Galaksi has grown into a smart orangutan who likes to play in the forest and climb trees by himself. If he sees a stranger, he will immediately climb down from the tree he is in and run to hug a surrogate mother for protection. 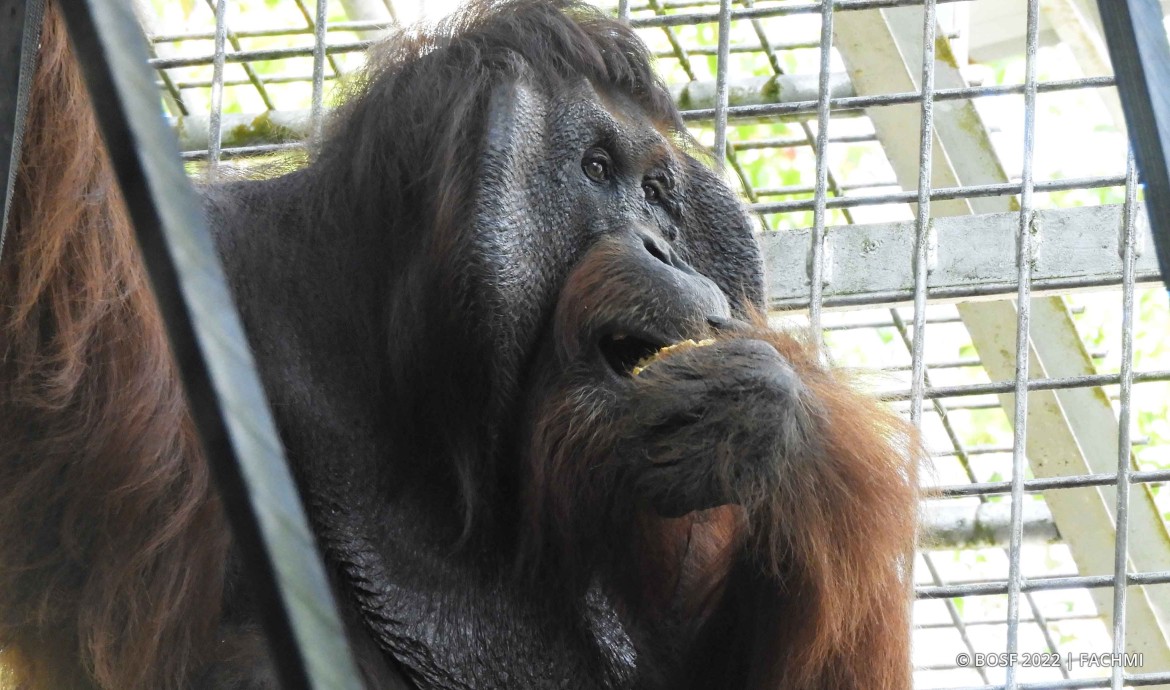 Gami: The Quiet One

Gami was found in the territory of a company operating in the area between the cities of Samarinda and Bontang. There, according to reports, he was seen on several occasions wandering around and allegedly had not made a nest for around six months.

Gami was rescued by the East Kalimantan BKSDA wildlife rescue team and brought to Samboja Lestari on November 3, 2021. He was visibly underweight at only 58 kgs even thought he was estimated to be around 20 years old. He was immediately placed in Socialisation Complex C, a quarantine enclosure.

It has been four months since Gami arrived and was first treated at the BOS Foundation’s Samboja Lestari Rehabilitation Centre. Results of his general examination are yet to be finalised. His body now looks stouter and he will eat any food the technicians offer him.

Gami never shows aggression in the complex; in fact, he seems to avoid people he doesn't know and will immediately retreat to the top side of the cage to observe newcomers. 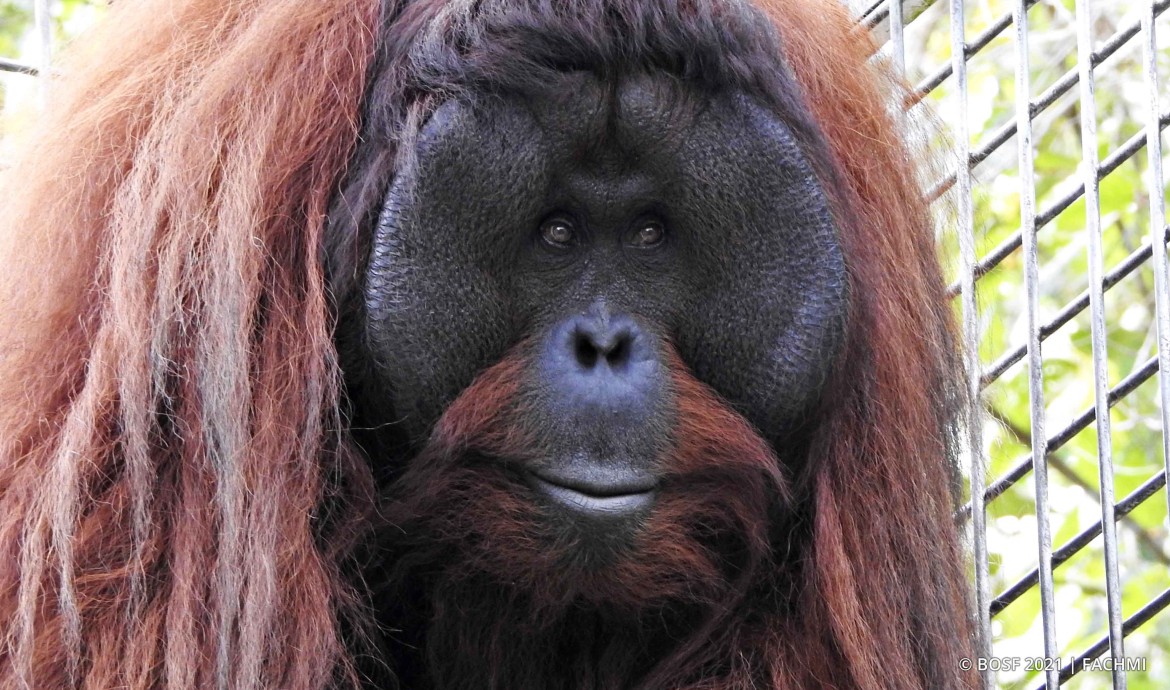 Uli: The Eldest One

Uli is a mature male orangutan aged at around 21 years. He was rescued by a resident of Loesan village in Muara Komam District, Paser Regency, East Kalimantan. Some time ago, Uli went viral on social media when people found out that a friendly adult orangutan had left the forest and entered a village. He was so friendly, the local residents had even fed him fruit!

After Uli's video spread on social media, a BKSDA wildlife rescue team from Balikpapan, in East Kalimantan, assisted by Muhtadin Wahyu, our vet from Samboja Lestari, immediately rushed to Loesan village to conduct a rescue.

Uli arrived at the Samboja Lestari Rehabilitation Centre on June 11, 2021. At Samboja Lestari, Uli was placed in Socialisation Complex C, a special enclosure used to quarantine orangutans during the pandemic.

A general health examination showed that Uli weighed 79 kg. Other than a bent, left index finger, he was in relatively good health. Interestingly, our team discovered two microchips in Uli’s body, with one registered in the Samboja Lestari orangutan inventory. Data showed that Uli originally came from Palangka Raya, Central Kalimantan, and came to Wanariset Samboja (the location the BOS Foundation worked in before the establishment of Samboja Lestari) on February 6, 1998. Uli had been released into the wild by the BOS Foundation on September 9, 1999, in Beratus Protection Forest, when he was very young.

Results of Uli’s examination confirmed that he was not suffering from tuberculosis, which was a common discovery in orangutans that we rescued back in the day.
In the Socialisation Complex, Uli has maintained a calm, non-aggressive manner. He always eats the food offered to him and diligently plays with the leaves delivered by the technicians. He is often seen at the top part of the cage, where he can watch our technicians working nearby.