Life in the Trees: Fall Down, Get Up, Try Again! 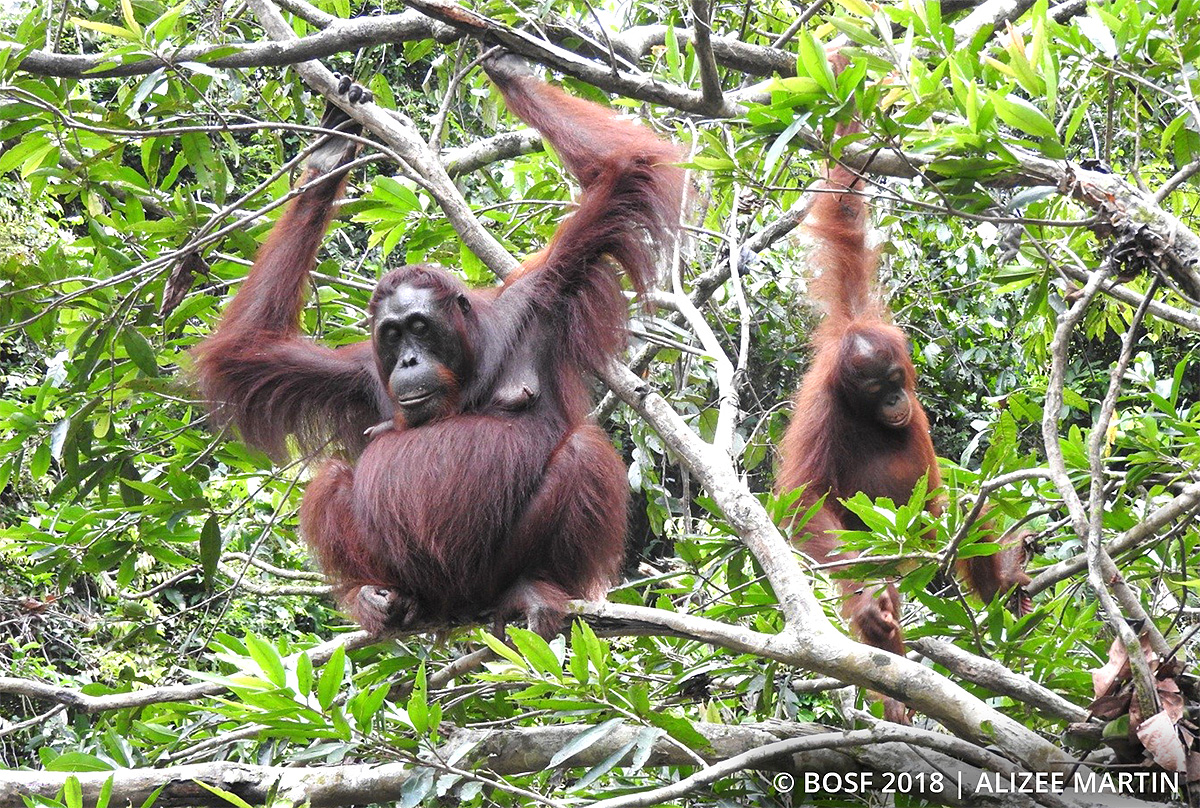 August 1, 2018 — When watching orangutans in nature documentaries, it is easy to imagine them as graceful rulers of the canopy; to whom climbing and brachiating through the trees is as natural and simple as breathing. This, however, would be an incorrect assumption. Just as toddlers learn to walk from following their parents, and through plenty of trial and error, young orangutans too must learn how to navigate the world around them. As the largest arboreal mammal in the world, orangutans face a steep learning curve when first grasping how to manoeuver on their own in the forest. 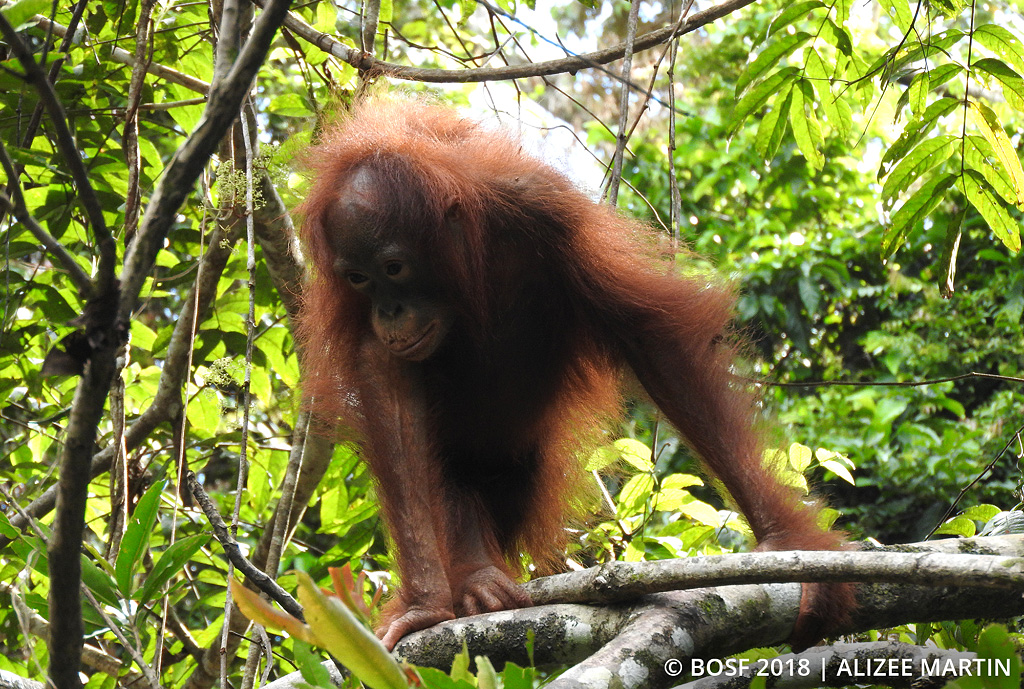 Here in the forests of Batikap, our PRM team from Camp Totat Jalu observes many mother-offspring pairs of varying ages. Each pair has distinctive personalities and unique relationships, making no two the same. What they do all have in common is that the youngsters make mistakes – and plenty of them! At 7-and-a-half years of age, Sifa has learned to move through the trees in a number of ways. We do not know where her mother has gone, but recently Sifa has been spending all of her time with Compost, a friendly adult female. While Compost is partial to the ground, Sifa prefers to stay high up in the trees. One day, as Sifa was brachiating through the trees, a branch she had grabbed hold of snapped just as she was swinging from it. Sifa fell about five meters before being caught by some lower branches. Adoptive mother Compost scrambled to her side, which was completely unnecessary, as Sifa appeared to be unhurt and continued on her merry way through the trees! 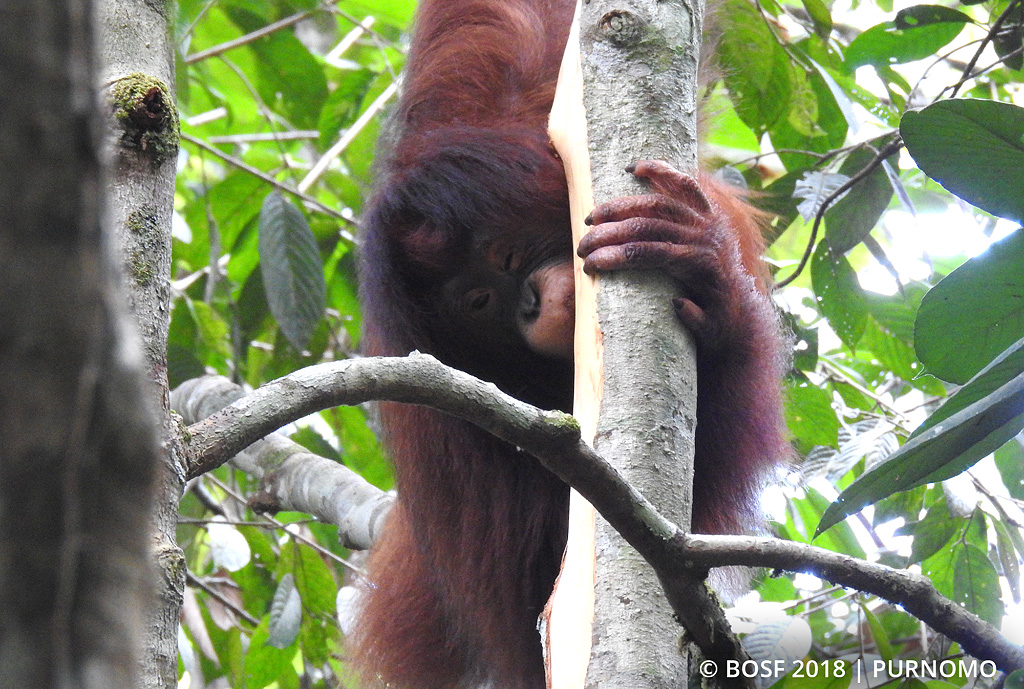 Garu and her mother, Gadis, are always a challenge to observe as they both like to stay high up in the trees. Garu, now 8-and-a-half years old, is extremely independent and will often travel far from her mother’s side. The one thing that does keep them together though, is delicious food. One day, Garu and Gadis were feeding on sweet fruit when a loud crack rang out through the forest. Gadis immediately scampered from the tree and swung across to a neighbouring one. Garu on the other hand, stayed put and continued to munch away. Seconds later, the tree that Garu was still sitting in collapsed! The team watched in horror as the tree dropped 20 meters down, taking Garu with it. While we all held our breath, supermom Gadis moved as quickly as she could down to Garu. It later appeared that we were all panicked for no reason, as Garu popped back up seemingly unscathed, juicy fruits still bursting from her mouth! 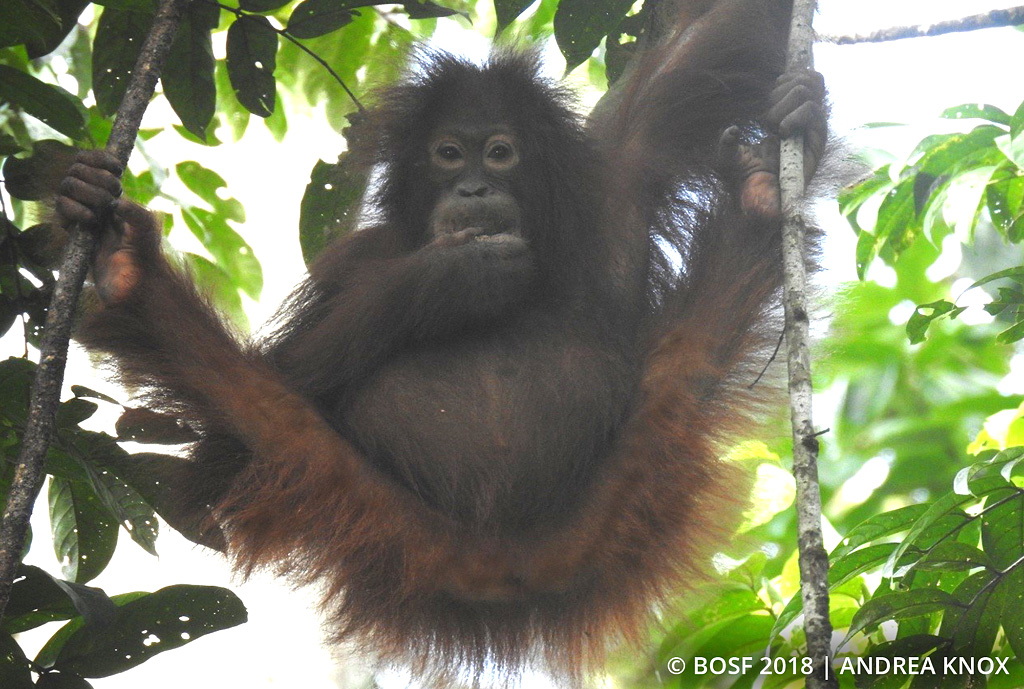 Goofy Riwut is growing quicker than she realises. On one PRM patrol, mom Cindy was observed taking a long rest on the ground, while Riwut practiced her dangling and brachiating skills. The trees that Riwut selected, however, were all incredibly skinny. On her first attempt, the tree she was holding on to bent over and collapsed to the ground! This did not deter Riwut, however, who persisted in choosing unsuitably small trees. Unfortunately, each tiny tree yielded the same result, with Riwut falling to the ground. Eventually, Riwut conceded defeat and joined her mother on the forest floor for a well-deserved play session. 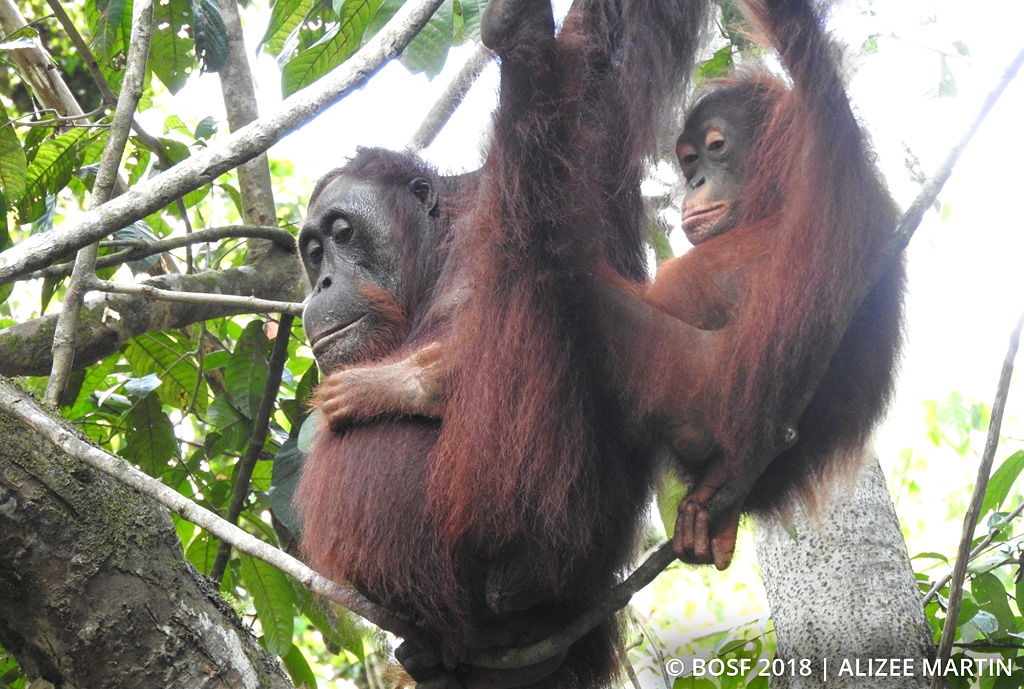 As is the same in human development, making mistakes such as these is a vital component of the early years for all orangutans, as they hone their skills and work toward becoming fully independent. Sifa, Garu, and Riwut may not have learned all their lessons quite yet, but with a little persistence they will get there. Meanwhile, their mothers certainly have their hands full!