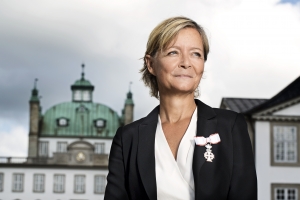 30 June, 2014 — Hamlet the Orangutan could not be prouder of his adopted Danish mom!

Lone Dröscher Nielsen established the Nyaru Menteng Orangutan Reintroduction Project in Kalimantan, Borneo, Indonesia in 1999 and has saved more than one thousand orangutans since then.

In 2010 His Royal Highness The Prince Consort visited her at the center. "I guess he also fell a bit in love with the orangutans— just like I once did," Lone says smiling. Lone Dröscher Nielsen and her team named a newly arrived orphaned orangutan 'Henrik' after the royal visitor.

Lone Dröscher Nielsen received the honor at Fredensborg Castle. "I am proud and I am deeply touched," Lone says "but what affects me the most is the fact that His Royal the Highness Prince Consort has not forgotten our cause."