Just over a year ago on the 14th of February 2013, a handsome orangutan named Edwan was released into Batikap Forest. Learn more about the BOS Nyaru Menteng Orangutan Release Program

Edwan first came to Nyaru Menteng at the end of August 2007 when he was already about four and a half years old. Back then he was described by the Nyaru Menteng staff as an active, somewhat aggressive male with short, bushy hair and very dark skin. Although 9 years old, he wasn't that big when he was released-- only a little over 65 pounds. Just after his cage was opened in the forests of Batikap he was one of those orangutans who climbed into the trees immediately, but he didn't travel far that day. 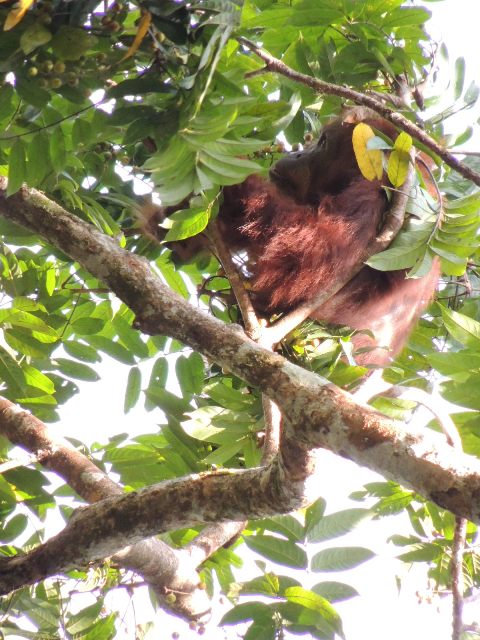 In the days that followed the release Edwan travelled a little way up stream of the river that runs in front of the camp and continued to behave aggressively towards anyone who tried to observe him. This sort of behavior occurred all throughout February.  During March  he wasn't directly observed. His signal was picked up from Bukit Simon, close to where Edwan was seen last, but no one managed to actually find him.  At the beginning of June however, Edwan was spotted upstream along another river, a few kilometers from where he was seen before.  He appeared to be a changed orangutan, for he wasn't bothered by the presence of the humans and was not aggressive at all.  His only reaction was to kiss-squeak when his observers tried to take pictures of him, but who wouldn't kiss-squeak in a situation like that! Edwan was as energetic as before, however, and kept moving around, swinging through the trees and eating a lot of fruit.

The rest of the month no one saw Edwan. He didn't make his next appearance until the beginning of July. The team wondered-- Was this going to be a monthly visit that Edwan would be granting us? Nothing had changed since his visit in June. He was still ignoring the people observing him and still eating a lot, which is very good. The monitoring team left him alone and Edwan decided not to show himself anymore.  Since the job of the post-release monitoring team is to regularly observe all of the reintroduced orangutans,  almost two months later at the end of August 2013, the team observed Edwan again a little further downstream from the place where he was last seen.  This time he was very busy building a lot of nests. To practice maybe? Who knows...

A few days later, in September, the team stumbled upon Edwan by accident when observing Ebol, a female released on the 4th of August 2012.  She's about the same age as Edwan, but came to Nyaru Menteng when she was just two years old-- together with her mother (Mama Ebol). Many people at BOS describe her as "Wah, cantik sekali!", meaning "Wow! She's very beautiful!"-- in an orangutan kind of way of course. {;(|} 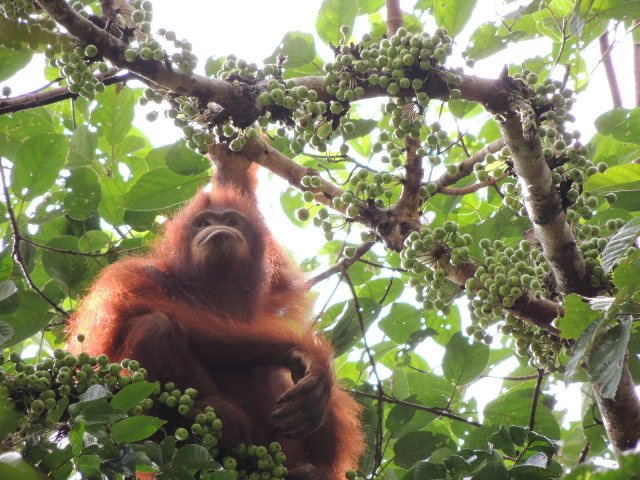 Ebol has long hair and a very bright face with protruding lips and a round nose. They would call a woman with the same characteristics cantik as well. Obviously Edwan was thinking the same thing, for he kept following Ebol around and if she was lagging behind he was looking back, making sure that she stayed with him.  They were seen together a couple of more times that month, until the beginning of October, when Edwan was seen alone. He was acting a bit grumpy; kiss-squeaking towards his observers like he'd done before. No surprise.... Who wouldn't be a little annoyed after losing a beautiful female like Ebol!

Edwan and Ebol found each other again a few weeks later, on the 20th of October.  They were peacefully eating together and following each other around, but in the weeks that followed Edwan was seen only a couple of times-- by himself and being grumpy again.

As with every good soap-opera Edwan turned up on the 19th of November. This time he was close to Emen!  Did he get tired of the pretty Ebol?  We of course don't know, because in the three months that followed the team couldn't pick up Edwan's signal-- nor Ebol's. Then, in the beginning of February of this year, the team got lucky and recorded Ebol's signal on one of the hills around Batikap.

In the days that followed, the team tried looking for Ebol without any success, but on the 25th of February they suddenly picked up a close signal in a very swamp-like piece of forest near the crosspoint of the two earlier described rivers.  The team left the transect and stumbled through mud, all the while tripping over roots.  Finally they found Ebol in a tree, eating some unbelievably sour orange-like fruits with five pits in the middle. She seemed to like them, though, and was happily dropping the left-overs around us, where they fell like tiny bombs on the ground. In the same tree another orangutan was sitting calmly-- and of course it was Edwan... He had again found his pretty lady!

The continued success of the BOS Nyaru Menteng Orangutan Release Program depends on support from donors like YOU! Please make a donation today!