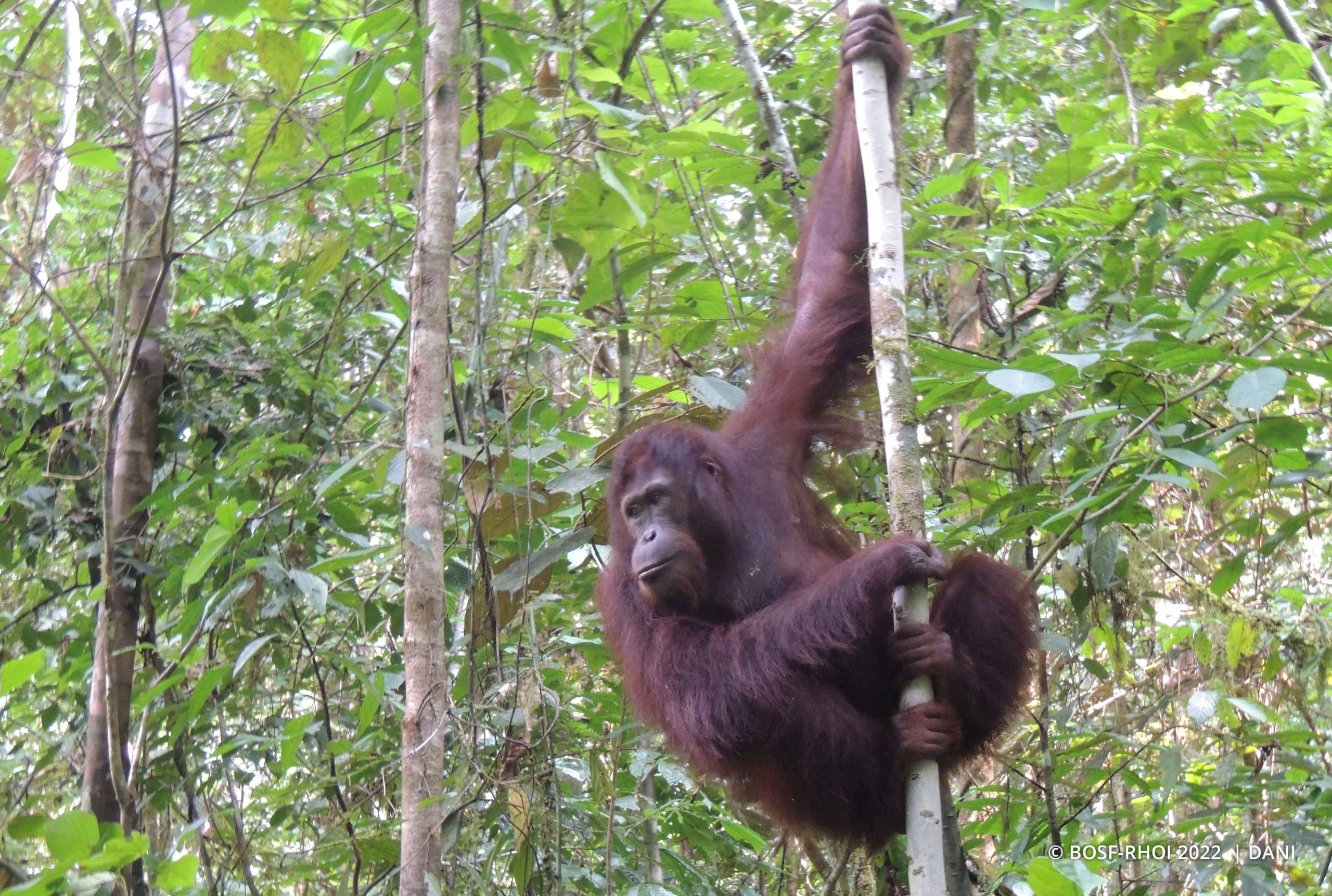 One of the most enjoyable experiences for our Post-Release Monitoring (PRM) teams is meeting up with orangutans who they have not seen for a long period of time. There is simply nothing more exciting than seeing an “old friend” in good health, still exploring the forest. Which orangutans did our PRM team catch up with recently in the Kehje Sewen Forest of East Kalimantan?

One morning in October, our PRM team from Camp Lesik, in the northern side of the Kehje Sewen Forest, set out as usual to go on patrol. The team hiked to Yosi’s transect, a place the team hadn’t visited for about two years. This transect is located directly adjacent to the Telen Soh Protection Forest and is one of the farthest transects from the camp.

“Hurry up! I saw an orangutan and I don’t know who it is.” Without further discussion, the team rushed to find the source of the call, to get a better look at the orangutan in question.

A male orangutan was soon located nearby, but just as the team was about to take more pictures of him, he quickly moved down a steep slope, leaving the team behind. The dangerous terrain made it too hard to keep up with this individual and so the team were left to identify him from the photos taken.

Upon arrival back at camp, the team set out to identify the individual. This proved to be a difficult task, as the individual photographed earlier did not resemble any of the orangutans recorded in the camp database. However, the photo clearly indicated that this was a young male who had already grown cheek pads.

Much discussion was had amongst the entire BOSF team , including with one of Samboja Lestari’s senior technicians on hand at camp, Imam Ghozali, better known as Pak Cik. Thanks to his years of experience working with orangutans at Samboja Lestari, Pak Cik was able to identify the male orangutan as Bajuri, who was released eight years prior. Bajuri was last observed by our PRM team in 2015. No wonder our team had such a hard time recognising him! 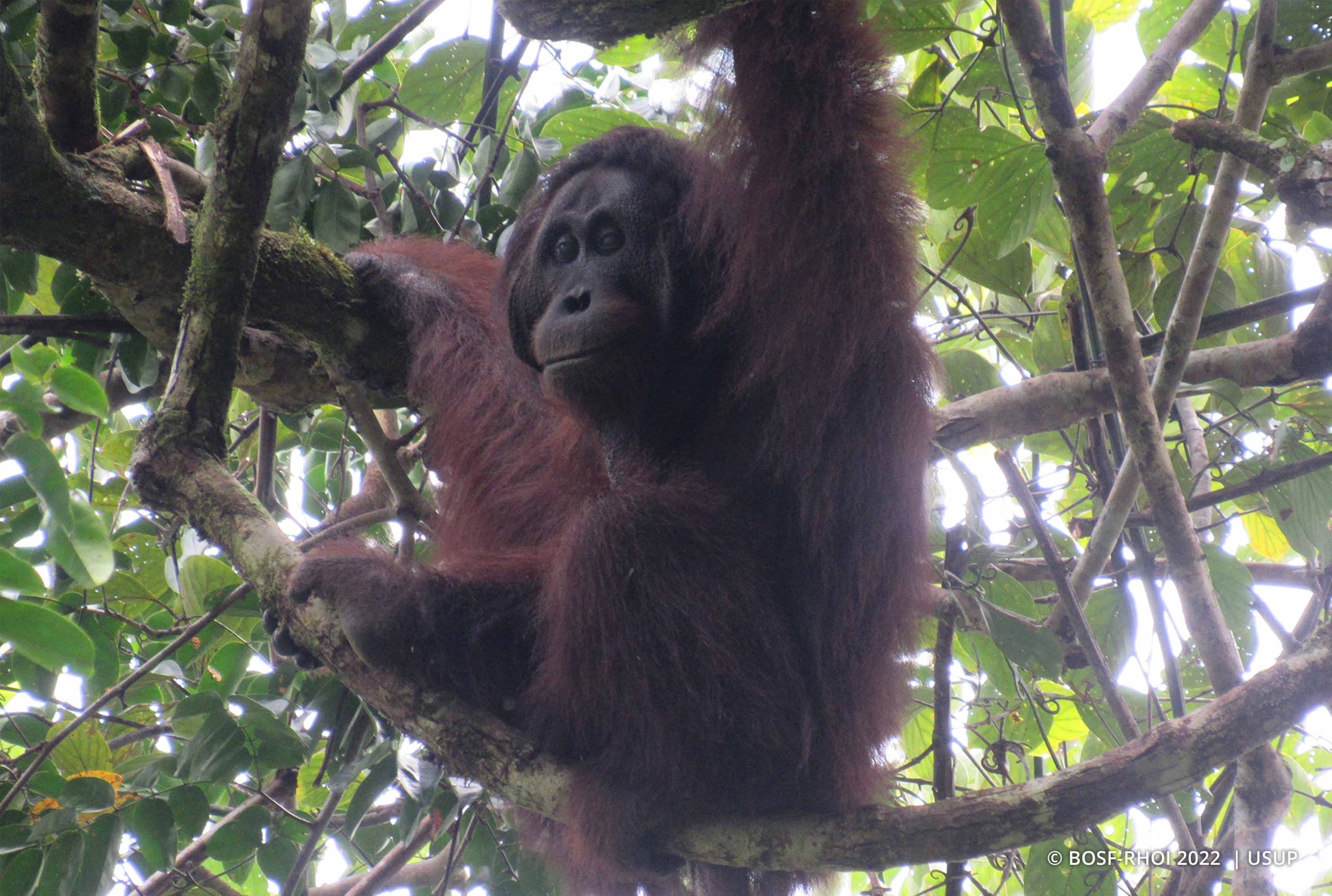 The team was delighted to have found Bajuri who, judging by his body and quick movements, appeared to be in good health. Following this encounter with Bajuri, the team was eager to look for other orangutans who had not been observed for a long time.

A month later, in November, the experience was repeated: This time, we found Casey, a female released in 2012 and who was last seen in 2015.

At the time, the team was patrolling in an area far from the camp, in Muara Soh. While no orangutans were found in the area, the team spotted remnants of partially eaten papaya and an old nest.

One curious team member wandered around while the others took a rest. Shortly after, he rushed out of the bushes saying that he had found an orangutan. The other team members quickly followed him to identify the orangutan before it disappeared into the forest.

Our team members recognised the orangutan immediately – it was Casey! They were ecstatic to find Casey, who hadn’t been seen in a long time, and observed her for a few moments before she descended a steep slope and could no longer be followed. During observations, Casey fiddled with the roots of a liana she had knotted into a ball and made a fan using dry leaves. She looked to be in very good health.

These two patrol discoveries gave our team some extraordinary experiences, to meet again with two long-time residents of the Kehje Sewen Forest, who both appeared to be healthy and thriving in the wild.

What a thrill it is to encounter these orangutans while on patrol. Keep exploring, team, and orangutans!