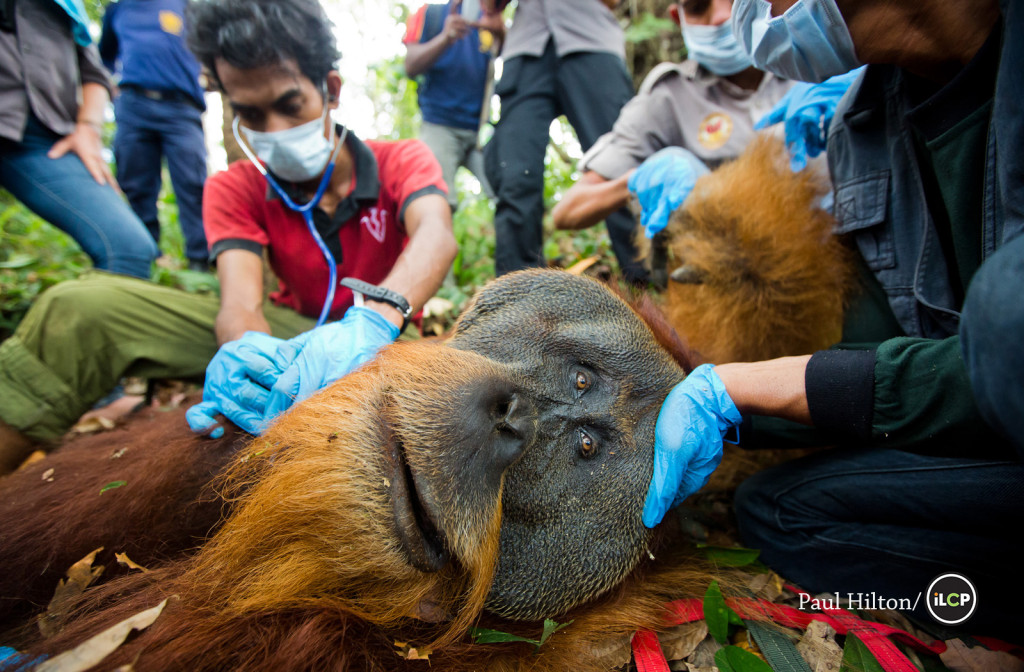 Sumatran orangutan rescued by joint conservation effort as habitat continues to be threatened by illegal land use and planning in Aceh Province of Indonesia.

On Friday 3rd April a rescue team from the Orangutan Information Centre (OIC) evacuated an adult male Sumatran orangutan marooned in a tiny patch of forest surrounded by oil palms. Once connected to the great rainforest of the Leuser Ecosystem on the island of Sumatra, this forest fragment now stands alone among 3000 hectares of oil palm and rubber plantations. Local communities reported the troubled ape to government authorities who called in the  OIC rescue team to relocate him. The orangutan was successfully released back to the rainforest the next morning.

“With only around 6,600 Sumatran orangutans left in the wild, this iconic species is classified as Critically Endangered. Almost 80% of their remaining habitat is inside the Leuser Ecosystem – the last place on earth where orangutans, rhinos, elephants and tigers co-exist in the wild,” said Farwiza Farhan, Chairperson of Forest, Nature and Environment of Aceh (HAKA), a local conservation group which also assisted with the rescue.

“The key biodiversity conservation issue in Sumatra, perhaps in Southeast Asia right now, is the proposed Aceh spatial plan which illegally aims to remove the protected status of the Leuser Ecosystem and hand over huge swathes of forest for the development of plantations and roads. Orangutans, elephants and tigers are already being pushed towards extinction due to deforestation, but it’s not only about biodiversity, our communities here in Aceh are also suffering from the destructive floods and landslides which follow this environmental vandalism,” Farwiza concluded.

Despite the protected status of both the Sumatran orangutan and the Leuser Ecosystem under Indonesian law, a recent report by the Sumatran Orangutan Society (SOS) revealed that the rate of forest loss in the Leuser Ecosystem has more than doubled in recent years. “Our analysis of satellite maps confirmed the alarming scale of forest destruction in this unique ecosystem. If the Aceh spatial plan goes ahead, we could see Sumatra’s iconic species wiped out in just a few years. We’re facing a true conservation crisis,” explained Helen Buckland, Director of SOS.

Disregarding the strong warnings and lobbying by conservationists and scientists, the Aceh government is still trying to push ahead with their proposed spatial plan which will open up even more of this highly sensitive area to oil palm, logging and mining.

Krisna, Field Coordinator of OIC’s Human Orangutan Conflict Response Unit, said "During our patrols we found the orangutan trapped in the last cluster of native trees for miles around. With no safe way out he was extremely agitated and looked malnourished so we had to act fast.  Performing these rescues is a last resort as it can be dangerous for both the orangutan and our team, but as this male was surely in trouble, we had no other option than to get him out of danger and into a larger forest for his safety.”

The rescued orangutan was given the name ‘Friday’ by the team due to the Easter timing of the rescue. A fully mature cheek-padded male, he was not an easy rescue. He evaded the team for sometime before their vet was able to sedate him. “There was a serious risk of injury when he finally fell from the canopy,” OIC Director Panut Hadisiswoyo explained. “His body did hit a branch on the way down, but the team moved fast to get our specialised net in the right position to catch him 15 metres below. He was really lucky. Our vet checked his condition and after being trapped in such a small area of forest lacking food, he was found to be very underweight. He also had a bullet in his chest which we removed on the scene. It’s clear that had we not been able to conduct the rescue, his future was to die starving here, or make a run for it where he could have been shot at and killed.”

Rescues on the rise

Only last month OIC rescued another adult male orangutan from the same area. Still catching his breath after overseeing Friday’s tough rescue, OIC Director Panut Hadisiswoyo said, “Over the last 3 years OIC has rescued 64 orangutans stranded just like this one. Adults, juveniles, mothers with babies – they end up in plantations looking for the forest that used to be here, for the fruits they need to survive. Friday’s rescue brought the count for this year to 11 orangutans already. That’s 11 in just 3 months so it’s a real concern”.

“Plantations are not safe places for orangutans. We often have to cut bullets out of the orangutans during rescues. People may try to shoot them to protect crops, to kill a mother in order to capture her baby to sell, or just for sport in some cases”, said Panut.

A second chance for life in the wild

“At dawn the following morning the team drove for more than one and a half hours through miles of uniform oil palms until they finally reached open forest,” Krisna said, describing the release back into the larger forested area of the Leuser Ecosystem. “As soon as Panut lifted the door of the crate, Friday’s massive hand emerged to hoist himself up the nearest tree. Within seconds he had scaled it and was looking down on the rescue team, shaking branches and vocalizing to drive us out of the forest.”

“This was a very successful rescue and relocation thanks to the hard work and expertise of the team” said Panut, “However, rescues are really a last resort. These evacuations carry major risks for the orangutans and for our team, and relocations don’t solve the larger problem driving this growing human-wildlife conflict. To protect orangutans, we really need to ensure their habitat is safe, and the Aceh spatial plan must be revised to ensure the Leuser Ecosystem remains protected as required by Indonesian law.”

Orangutan Outreach is a proud supporter of the OIC HOCRU team!  US donors can make a fully tax-deductible contribution to further OIC's frontline conservation programs, including orangutan rescues, and campaigning for the protection of the Leuser Ecosystem, by donating via the Orangutan Outreach OIC page. [https://redapes.org/oic]

Please make a donation for the OIC HOCRU team today!