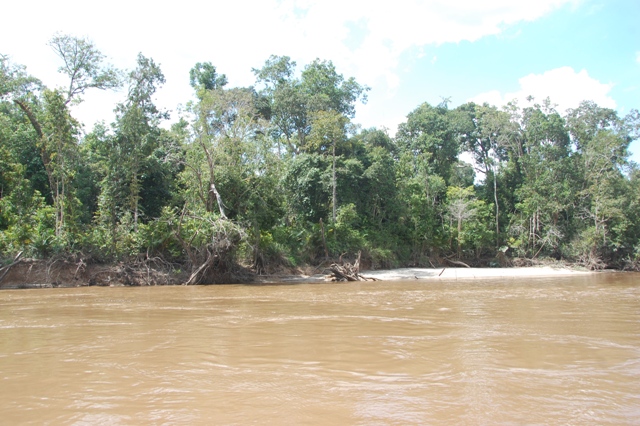 July 2013 - Having successfully commenced the reintroductions of orangutans into Bukit Batikap Conservation Forest, the orangutan rehabilitation process at BOS Nyaru Menteng is now progressing in leaps and bounds.  As such the team has been able to start moving more orangutans to the pre-release islands so they can complete their final pre-release rehabilitation phase.  Learn more about the orangutan release process here.

Orangutan Outreach supporters are familiar with the islands from the Animal Planet series, Orangutan Island. If you missed this amazing show you can order the DVD of Season 1 in our online shop.

Pre-release Island as a "University" 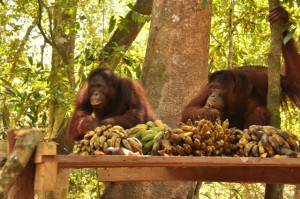 Kaja, Bangamat, Palas, and Hampapak are pre-release islands run by the BOS Foundation in Nyaru Menteng. These small islands are situated within the Rungan River close to Sei Gohong village in Palangka Raya. Just like a university, on the island the orangutans will receive the final stage of learning in order to live independently.

The orangutans will live just like their wild counterparts in the forest. They no longer need to go back to their enclosures at night. Instead they can build nests and stay in the trees. At this stage, their interaction with humans is significantly decreased. There are no more babysitters  and the technicians will now give food supplements twice a day, instead of 5 times as in Forest School. The orangutans will now have to forage and choose their own natural foods.

"Forest survival skills" are one of the most important criteria to determine whether an orangutan is eligible to live on a pre-release island. Apart from these life-saving skills, other criteria including health, social interactions, and general behavior are also monitored and assessed.

After moving 26 orangutans to Bangamat Island by the end of December 2012, Nyaru Menteng moved another 31 orangutans to one of the other pre-release islands, Kaja. These relocations were completed gradually.

The first relocation started on Thursday, June 20th, with 17 orangutans consisting of 13 females and 4 young male orangutans. These are 6 pairs of mother and young: Jambi-Jamartin, Nora-Ara, Dewi-Debora, Susi-Akhates, Holly-Anton, and Meklies-Mekhlies, and 5 females Mentos, Koko, Miri, Cetah, and Peggi.

Accompanied by Nyaru Menteng's Vets Agus Fahroni and Vet Riani, the first stage of their relocation was attended by Lone D. Nielsen (Founder of the Center and BOSF Senior Advisor) and Anton Nurcahyo (Nyaru Menteng Program Manager). Anton Nurcahyo released a young male orangutan (who was also named Anton!) along with his mother Holly. Lone D. Nielsen released a mother orangutan named Jambi and her son Jamartin (who was named for the Executive Director of BOSF).

The second stage of the relocation was completed on Monday, June 24th, with 10 female orangutans. These were Olive, Mocacino, Wanna, Compost, Rina, Cameron, Beda, Merry, Mini, and Nata. Wanna is one of the 48 orangutans confiscated by the Indonesian Government from Thailand in 2006. Four male orangutans Juki, Kisar, Sabun and Hercules followed later in the next stage.

The plan is for Nyaru Menteng to move 51 orangutans to Kaja Island. The remaining 20 orangutans will be moved soon after their health checks are completed. 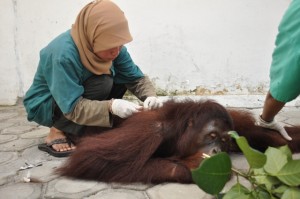 Adult female orangutans also receive birth control implants to ensure they can concentrate on finalizing and improving their forest skills before being reintroduced to the natural forest. To have a new baby to care for while still working on ensuring they can fend for themselves in the wild may jeopardize the safety of both the mother and her baby.

Of the 51 orangutans to be placed on pre-release island, some are those from the original BOS orangutan adoption program. Beda was already moved to the island on stage 1, while Carmen, Carlos, Buland and Elisa will follow Beda soon. This wonderful development can only happen thanks to you, our adopters!

Orangutan Outreach is keeping a close eye on Kesi, Fio and Grendon-- who are moving closer to their time on the island. Lomon, our fourth original adoptee, is already on an island!

Our newest adoptee from Nyaru Menteng, Elo, will have many years of Forest School before he, too, is ready to move to an island in preparation for his release back into the forest!  You can adopt Elo here. Funds raised go directly to support the orangutans at BOS Nyaru Menteng! 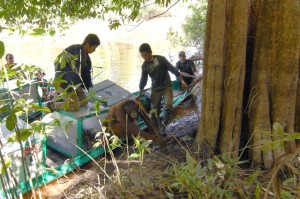 Each eligible orangutan passing through Nyaru Menteng, will at some point, live on a pre-release island to ensure they are as prepared as possible to be considered as a future release candidate. At the moment the islands have reached their maximum capacity and the orangutans at Nyaru Menteng are waiting for their turn to develop their final skills on a pre-release island. While those orangutans still on the islands are waiting for their time to be released into the wild.

Finding suitable forests to release orangutans into is a challenge.  Together with BOS, we are currently in the process of searching for another release site in Central Kalimantan to ensure that once Bukit Batikap has reached carrying capacity, we can continue the orangutan reintroductions without delay. Let's keep that train moving! Please make a contribution today to our BOS Nyaru Menteng Orangutan Release Fund.

Heading to the Island.