New York, NY - Today a global coalition of NGOs and civil society groups issued a plea to President Susilo Bambang Yudhoyono to protect one of the world’s most biodiverse forests, the Leuser Ecosystem on the island of Sumatra.

UN Secretary General Ban-ki-moon has set the expectation that leaders will announce bold actions to reduce emissions, strengthen climate resilience and mobilize political will for a meaningful legal agreement in 2015. The coalition is calling on President Yudhoyono to cancel an illegal spatial plan, drawn up by the government of Aceh province, which will destroy a large area of extraordinarily biodiverse rainforest and release an enormous amount of carbon into the atmosphere.

“Deforestation and conflict can no longer be the standard cost of doing business in today’s world,” said Lindsey Allen, Executive Director for Rainforest Action Network. “A growing number of investors and governments are demanding that global commodities be produced with a safer climate future in mind. We are united today to plea with President Susilo Bambang Yudhoyono to back up the strong commitments he has made with bold action to preserve the Leuser Ecosystem – a globally critical carbon sink that keeps massive amounts of carbon in the ground and out of the atmosphere. We cannot let this precious landscape become yet another pollution source in today’s climate crisis.”

“The president of Indonesia can respond to the calls of hundreds of thousands of people rallying for bold climate action, and over one million who have signed a petition calling on him to protect Indonesia’s forests, by rejecting the plan to destroy the Leuser Ecosystem for palm oil and pulp plantations,” said Oliver MacColl, Campaigns Director for Avaaz.

Indonesia is now the third largest emitter of carbon pollution due to the expansion of plantations and deforestation projects. And deforestation rates are still rising. A new report published in the Nature Climate Change journal in June 2014 found that Indonesia has overtaken Brazil in having the highest rate of deforestation in the world.

“Losing the Leuser Ecosystem would be a disaster for the forests and people of Aceh,” said leading primatologist Dr Ian Singleton, Director of the Sumatran Orangutan Conservation Programme.

“It is the last place on earth where orangutans, rhinos, tigers, and elephants coexist in the wild. President SBY has pledged to protect Indonesia’s forests and these iconic species that depend on them, but so far he has failed to live up to his words,” continued Dr. Singleton.

“The situation is very clear and a clear test of President SBY commitment to action on climate change. If he does not cancel the Aceh Spatial Plan an extremely dangerous precedent will be set for law enforcement in Indonesia and the iconic species he claimed to want to save, will surely be lost to extinction. Time is running out for President SBY to take action. He only has a couple of weeks before he steps down from office,” said Rudi Putra, winner of the Goldman Environmental Prize.

A video of the plea to President Susilo Bambang Yudhoyono is available at: http://www.youtube.com/watch?v=7x5UyXKYnYg

UN Secretary-General Ban Ki-moon has invited global leaders to the UN Climate Summit 2014 on 23 September to motivate bold climate action. An ambitious, visionary approach is now critical: Climate change is happening and is damaging the ecosystems our societies and economies rely upon. It is time for a meaningful global agreement and immediate action.

Mr President, it doesn’t have to be this way. World leaders are expecting to see their peers taking strong positive action beyond the Climate Summit to put the brakes on the carbon pollution that results from the destruction of the planet’s remaining forests. The very last thing the world wants to see is vast areas of intact forests being signed over for logging and pulp and oil palm plantations: Yet this is exactly the reality facing the Leuser Ecosystem in Sumatra today.

The Leuser Ecosystem is by far Sumatra’s most significant remaining tropical rainforest and it contains some of the richest representations of the biodiversity of Southeast Asia. In fact, it is considered by experts to be one of the world’s “Most irreplaceable areas”[2], ranked overall as the 33rd most irreplaceable area out of over 173,000 protected areas worldwide. It is the last place on earth where orangutans, rhinoceros, elephants and tigers still coexist in the wild. It is worth millions of dollars each year to Indonesia through the ecosystem services it provides to Aceh’s human community. It is also safely storing millions of tonnes of the planet’s carbon in its forest and peat soils. Yet, as we write - at this very moment - local politicians are pushing through a plan to open up the Leuser Ecosystem for logging, oil palm and mining. The plan will also legalise numerous illegal roads which are already cutting through Leuser’s forests.

President Yudhoyono, with only a stroke of your pen you could stop this tragedy and save the Leuser Ecosystem for the benefit of our climate and for generations to come. We are now at a globally historic crossroads. We write to pledge our support to you. We will stand behind you as you take bold action to save the Leuser Ecosystem from destruction. For the sake of the local communities who depend on these forests for their survival and livelihoods, for the sake of our global biodiversity and our climate, please leave an enduring and meaningful green legacy by protecting the Leuser Ecosystem.

Over 1.3 million people have signed a petition urging you to reject the plan to cut down protected rainforests in Aceh. Indonesia’s majestic forests are a global treasure and we encourage engagement with the local community to develop a plan that prioritises truly sustainable development, and protects this fragile ecosystem and the animals that live there.

President Yudhoyono, we the undersigned are appealing to you to demonstrate Indonesia's commitment to bold climate action by saving the Leuser Ecosystem. We simply cannot secure a safe climate without your help. 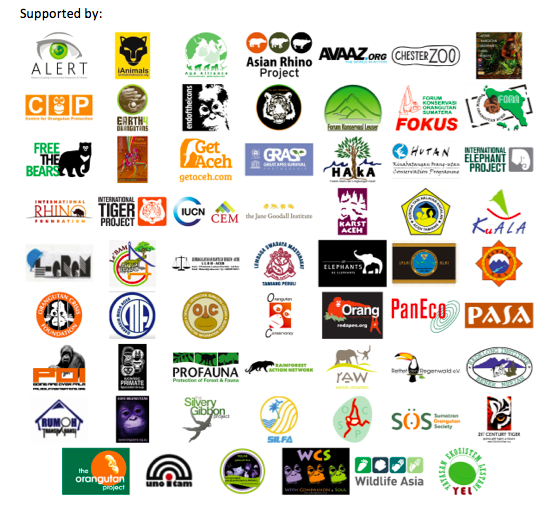