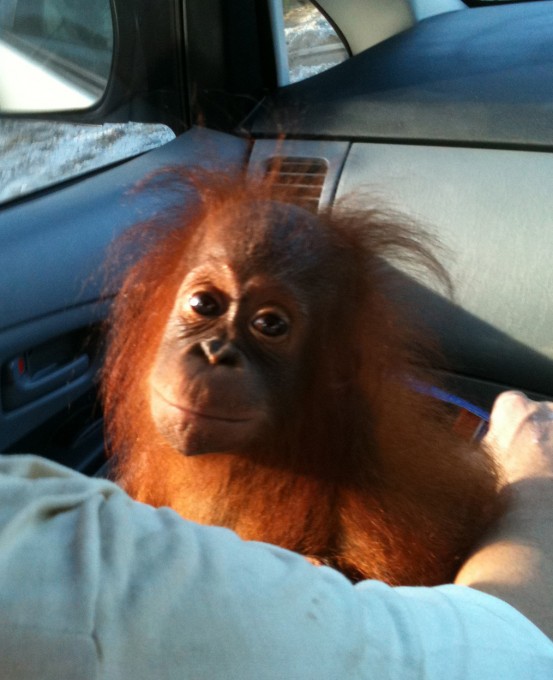 One year ago, Orangutan Outreach joined forces with our dedicated colleagues at the Center for Orangutan Protection (COP) and the Jakarta Animal Aid Network (JAAN) to make a difference for the orangutans living in the faraway region of Sintang, West Kalimantan. We called ourselves the O-Team and we spent three harrowing days confiscating orangutans who were being held as illegal pets.

Sintang was a vigilante mission from the start and Orangutan Outreach knowingly acted without the permission of the Indonesian Ministry of Forestry, the governmental body legally responsible for the welfare of orangutans in Indonesia. We did so because we believed in our hearts that we were doing what was best for the orangutans. Indeed, we did in fact save the lives of six amazing orangutans on that first mission: Pingky, Pungky, Mimi, Momo and Pinoh.... along with everyone's favorite baby, Luna.

Several months later, we carried out a second O-Team mission with Willie and rescued a young female orangutan named Neng. Over the next few months, five more orangutans were rescued by our team in Sintang, bringing the total to twelve. Several of these rescue missions were captured on film and the clips can be seen on our YouTube channel.

Acting in haste came at a price. We did not have time to set up a proper management structure, and this inevitably led to operational issues. We suffered ongoing conflicts between our trained vets and the local management team, which had no prior experience with orangutan husbandry. We insisted that the local managers follow strict protocols and procedures, but they did not follow them. They instead did as they wished-- going so far as to force out the only skilled people with any experience caring for orangutans. In March, our last vet left-- and since then there has been no qualified, trained orangutan vet on the premises. This was not acceptable.

We did our best to mitigate the situation time and again, but ultimately had no choice but to come to the conclusion that the problems were simply not going away. This past April, things went from bad to worse. As many of you know, we suffered a tragic setback when the smallest orangutan baby, Luna, disappeared from the center. We at Orangutan Outreach demanded to know how such a thing could have happened. How could a baby orangutan go missing? What had gone wrong? Nearly two months later, we still do not know the full story of what happened on that terrible day.

What we do know is that the Indonesian Ministry of Forestry was alarmed at the loss of an orangutan and informed us that-- contrary to what we had been led to believe-- the Sintang center did not have a license to operate legally. It was illegal.

Given the unresolved situation with Luna, the pressure from the Ministry of Forestry, the lack of a qualified orangutan vet and ongoing concerns with the management of the center, we decided that the welfare of the eleven remaining orangutans would be better served under the professional care of International Animal Rescue (IAR), which operates a government-approved orangutan rescue center in the West Kalimantan town of Ketapang. In fact, the Ministry of Forestry, directly requested to IAR that they should make arrangements to accept the Sintang orangutans. We at Orangutan Outreach were in full agreement and took all necessary steps to facilitate the move.

Orangutan Outreach and IAR have been partners for over a year and a half and we have been directly supporting their excellent work via online adoptions of Monti the orangutan. We have the utmost respect and admiration for the entire IAR team, and their success and competence in Indonesia and elsewhere is well-known by animal conservationists around the world. We knew that IAR's trained, qualified vets could be entrusted to provide the best possible care for the eleven remaining orangutans in Sintang, so when the Ministry of Forestry made the final decision to evacuate them to Ketapang, Orangutan Outreach gladly accepted their ruling.

The transfer of the orangutans to their new home in Ketapang went as smoothly as one could have hoped given the reality involved with transporting eleven orangutans. Logistics were carefully arranged and the move finally took place last weekend. The orangutans traveled together by truck in the care of IAR's vets and arrived safe and sound just a few days ago. Our only regret is that Luna was not among them...

The partnership between Orangutan Outreach and IAR will now be stronger than ever as we work together to build a brand new orangutan rescue facility for all the Ketapang and Sintang orangutans. IAR has already acquired a 60-acre area of forest in Ketapang, about a half hour from the current center, and with our full support they will now begin building a rescue & rehabilitation center for the 30+ orangutans now being cared for in Ketapang-- as well as the many others who are still waiting to be rescued with help from the Ministry of Forestry. Plans for several large, free ranging areas for orangutans are at an advanced stage and the buildings are currently being designed.

Many of you have come to know Pingky, Pungky, Mimi, Momo, Pinoh, Neng, Prima, Suki, Jimo, Raja and Cinta through our adoption program, our newsletters and our regular Facebook updates. We are pleased they will all now have the opportunity to meet Monti in person as well as many other orphaned and displaced orangutans, all victims of deforestation and poaching. In better times we used to joke about setting up a "play-date" for Luna and Monti... and we know Luna is there in Spirit with all her friends.

The Orangutan Outreach adoption program will continue undeterred and we will soon be putting out a new adoption update. Luna is a special case, of course. For all of you who have adopted her--and there are many hundreds of you!-- we can transition your adoption to another baby if you would like. Your funds will continue to support the welfare of the Sintang orangutans in their new home at IAR Ketapang.

We cannot thank you enough for your continued support through the difficult period of Luna's loss and the transfer of her friends to their new home in Ketapang. On behalf of everyone at Orangutan Outreach, thank you again for your support, your sympathy and your understanding.