SOCP: Four Sumatran orangutans to get a second chance at freedom in the wild!

Sumatra, Indonesia : On November 14, 2018, the Sumatran Orangutan Conservation Programme (SOCP) transported four Sumatran orangutans to its orangutan reintroduction centre in Jantho, Aceh Province, to begin the process of becoming wild orangutans again after being confiscated from the illegal pet trade. They are Leo, Aruna, Cut luwes and Ully. 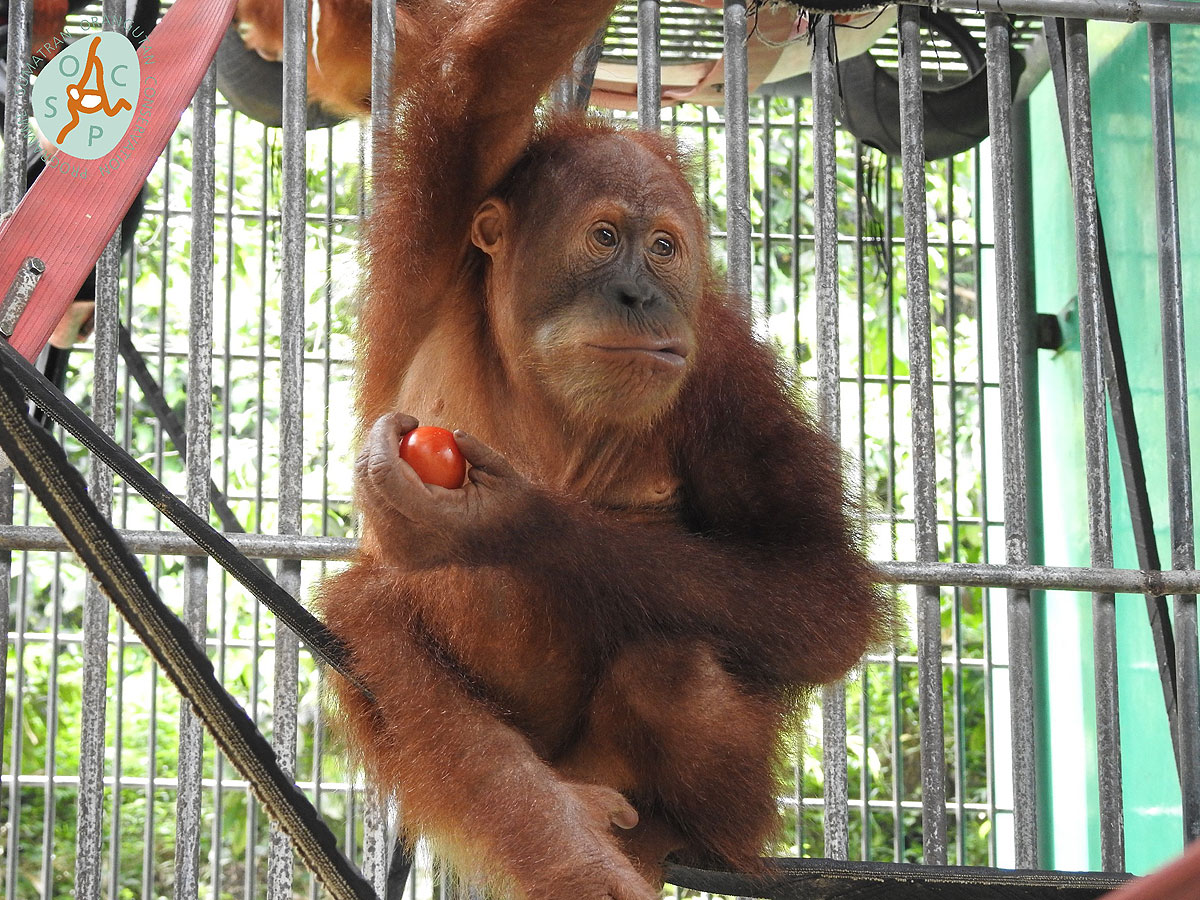 LEO (estimated 6,5 years old), is the only male in the group. He was confiscated from Aceh Tamiang in 2016, from a villager that kept him illegally at home. When Leo first time came to the SOCP’s Orangutan Quarantine & Rehabilitation Center, near Medan in North Sumatra, he had a terrible skin disease affecting almost his whole body, but now he is in good health and fullly recovered. 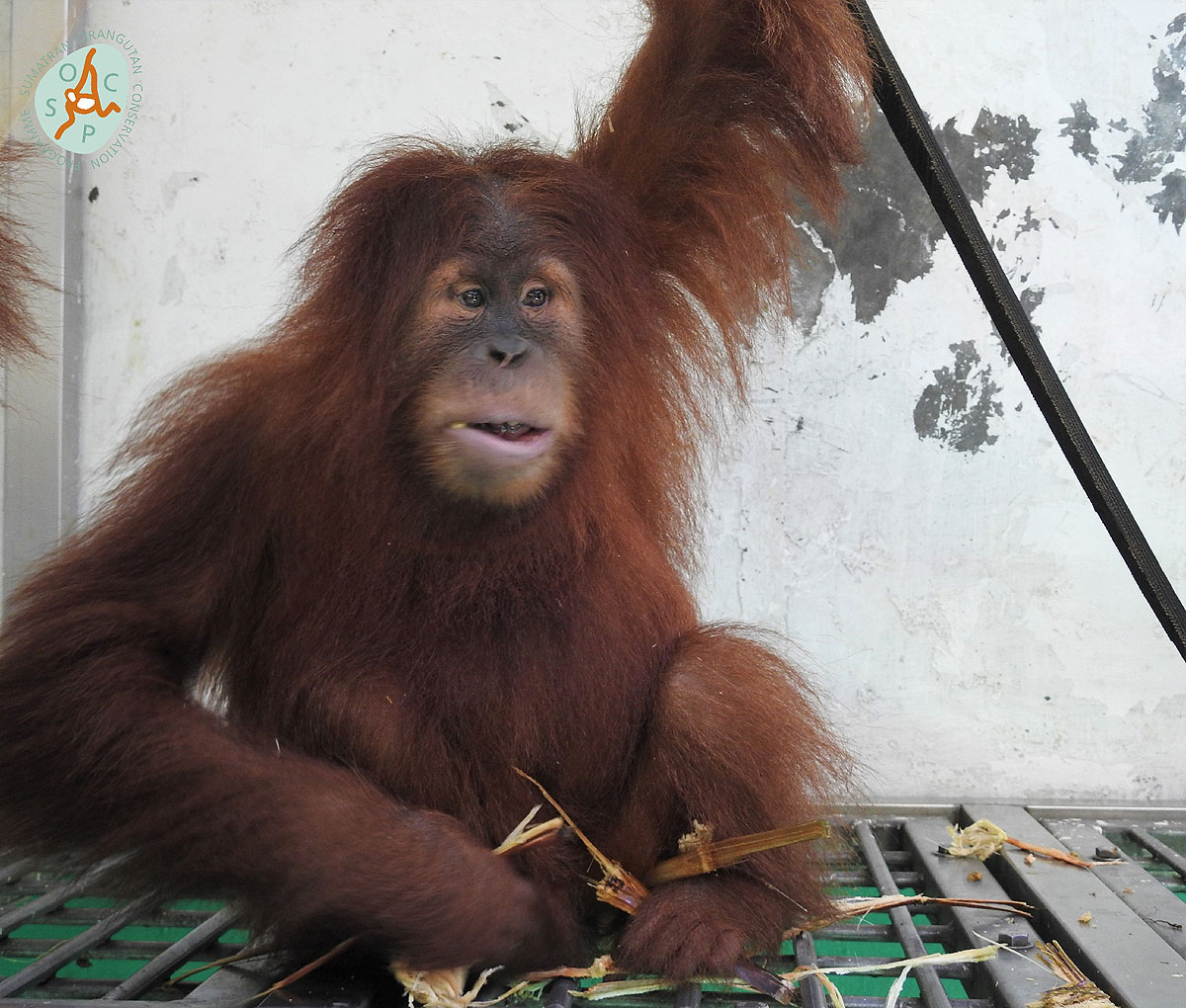 ULLY, is a young female, estimated to be around 5 years old. Ully was one of 4 infant orangutans rescued from the wildlife trade in July 2016, when they were being smuggled from Aceh to Medan in North Sumatra. After confiscation the four orangutans were brought to the SOCP’s Quarantine and Rehabilitation Centre for medical care and rehabilitation. Ully will be the first of these four infant orangutans to be released and to return to their native habitat, Sumatra’s tropical rainforest. The three other infants confiscated at the same time as her, Dina, Iben and Deka, are still being cared for and undergoing the rehabilitation process, still needing lots of support from the SOCP’s veterinary staff and animal caretakers before they can join Ully in the forest at a later date! 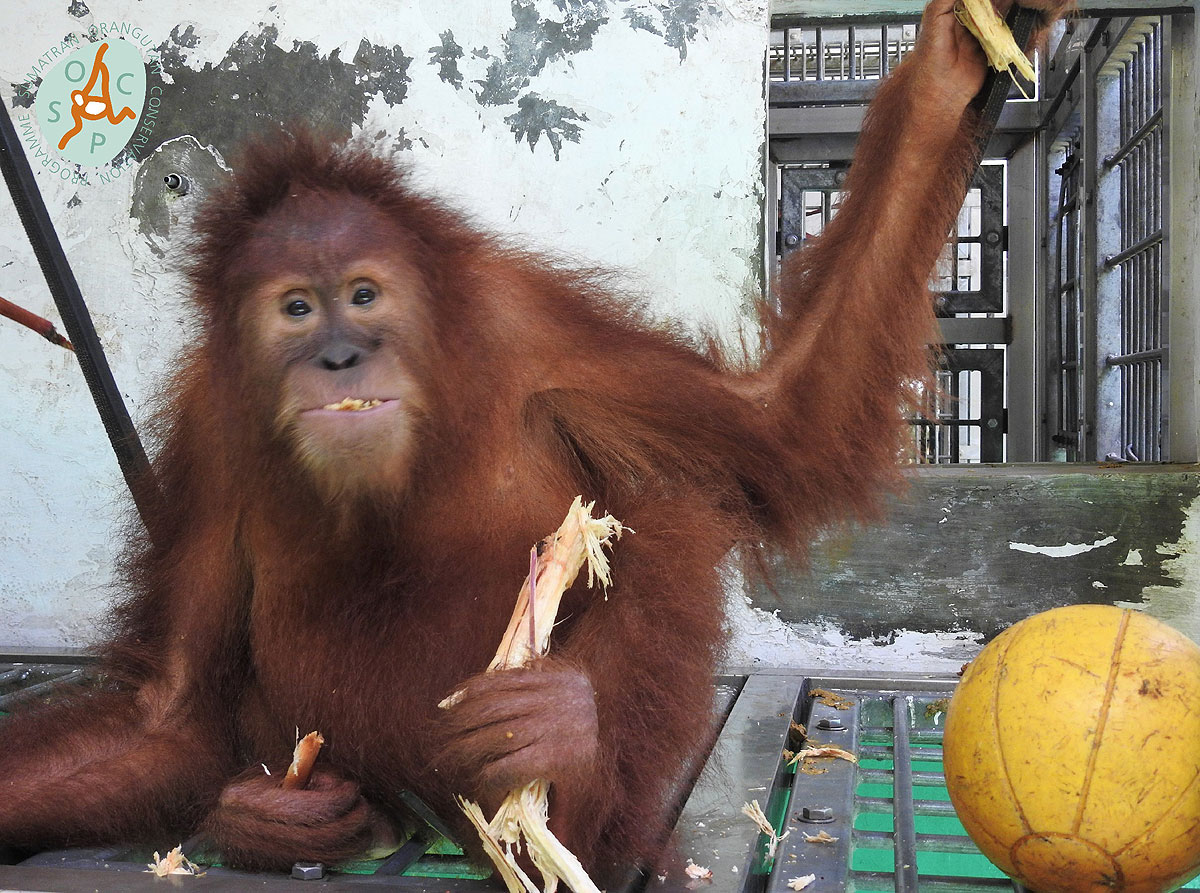 CUT LUWES, is a female orangutan who was handed over voluntarily by her owner to police in Gayo Lues, in central Aceh, in mid-2015. Since then Cut Luwes has made great progress and passed all her medical tests. Despite her time in captivity, however, she remains a relatively wild little orangutan who is not so keen on people, preferring to keep her distance when people approach her cage. As such, she should remember well her early life in the forest with her mother, and how to survive and thrive when released back to the forest once again. 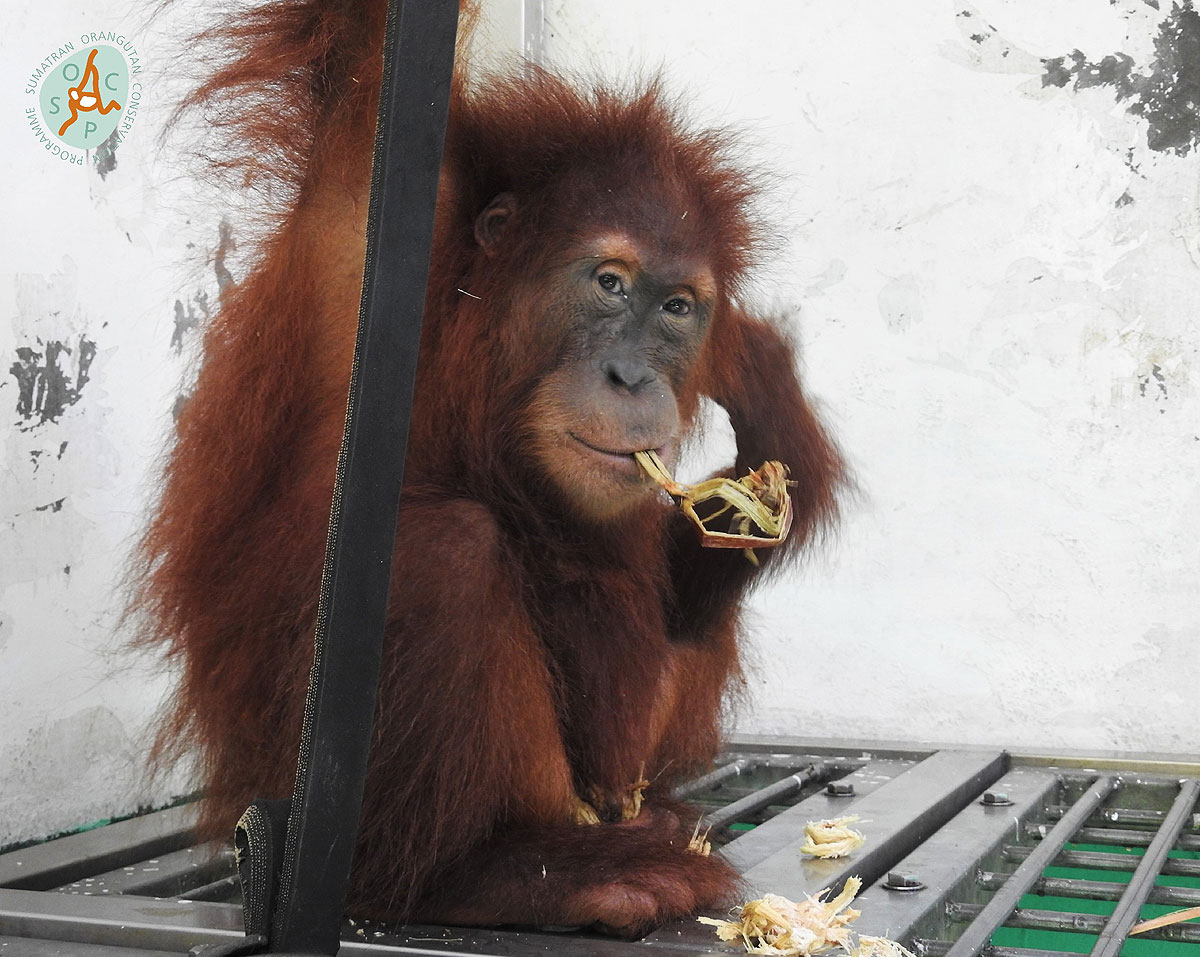 ARUNA, is a young female orangutan confiscated in South Aceh, in March 2015. At the time she was extremely malnourished and dehydrated, but has since recovered fully to become a fit and healthy young orangutan. During her time at the quarantine and rehabilitation centre SOCP staff also noticed that Aruna was very accustomed to people, to the extent she had to be encouraged
to become a little orangutan again, instead of a little human. She has managed to do this, however, and is now an integral member of the group transferred to Jantho today to begin their new life as wild orangutans once again.

Dr Ian Singleton, Director of the Sumatran Orangutan Conservation Programme, said “It’s always a very special time when these orangutans graduate from the quarantine centre and move on to the next and final stage in the reintroduction process. When you remember the pitiful condition some of them first arrive in, its really heartwarming to see them get this far, and even more rewarding when you meet them again later, living free in the forest, ” he added.

These four orangutans are joining 109 other orangutans already reintroduced into the Jantho Pine Forest Nature Reserve in the far north of Aceh, as the SOCP gradually establishes an entirely new wild population of this Critically Endangered species there.

Drh Citrakasih, SOCP’s Reintroduction and Quarantine Supervisor stated, “Prior to us first starting reintroductions in Jantho, there was no existing wild orangutan population there, even though there was historically. By releasing orangutans like Leo, Aruna, Cut Luwes and Ully, we are gradually creating an entirely new wild population of the species, as a kind of safety net in case anything happens to the remaining truly wild populations further south on the island”.

Testament to the fact that the new population is doing well are two recent births in 2017, both to orangutan mothers previously released in Jantho in 2012. In September 2017, the SOCP’s post- release monitoring team came across an adult female, Marconi, not far from the reintroduction station. She was carrying a male infant of around 11 months old, named Masen by the SOCP team after the forest region in which she was born. And then just a few weeks later, in November, the adult female Mongki was seen with a young female infant that was just a few weeks old. She was named Mameh, which means beautiful in the local Acehnese language.

Mukhlisin, Manager of the Jantho Reintroduction Station for the SOCP also said, “As wild orangutan females normally have their first infants when they’re around 15 years of age, and as most of the orangutans we’ve released in Jantho were between 5 and 10 years old at the time, we knew when we started reintroductions there in 2011 it would be a few years before we started to see new infants being born. But now that we are finally seeing them, the first generation of a brand new wild population of their species, and are of course looking forward to many more in the coming years.”

Leo, Aruna, Cut Luwes and Ully will first be given time to acclimatize to their new surroundings, their new caretakers, and a lot of new and unfamiliar foods from the Jantho forests. When fully released in a few months time they will be closely monitored by the SOCP’s post release monitoring team. All being well, they will adjust well to a life in the wild once again and go on to produce infants of their own in a few years, thereby becoming founders of the new population.

Sapto Aji Prabowo, M.Si, Head of the Aceh Conservation Agency (BKSDA) stated, “Whilst the new population we’re creating in Jantho is doing extremely well, we still need to deal with the root

of the problem - the fact that orangutans like Leo, Aruna, Cut Luwes, Ully and many others like them are still being captured and kept illegally as pets in the first place”.

“Its imperative that people are informed and understand that it is illegal to capture, kill, trade, own or even transport an orangutan in Indonesia, and prosecutions are on the increase. People need to be aware that they face prosecution, large fines and lengthy prison sentences if they are caught engaging in these criminal activities!”, Sapto emphasized.

Background:
Ø The Sumatran orangutan (Pongo abelii) is a distinct species from its neighbor in Borneo (P. pygmaeus). In November 2017 scientists announced to the world the existence of a third, a new species of orangutan, in Sumatra, namely the Tapanuli orangutan (P. tapanuliensis), living in the Batang Toru Ecosystem of North Sumatra: http://www.batangtoru.org/orangutan/.

Ø Only around 13,500 Sumatran orangutans and less than 800 Tapanuli orangutans remain in the wild. All three orangutan species are listed as Critically Endangered by the International Union for the Conservation of Nature (IUCN) in their Red List of Threatened Species.

Ø The SOCP is active in all aspects of Sumatran orangutan conservation including :
1. Confiscation, rehabilitation, and reintroduction of captive orangutans to form new wild populations.
2. Environmental education and awareness raising
3. Surveys and monitoring of wild populations
4. Habitat protection and restoration
Since 2001 the SOCP has received over 370 orangutans at its specialist Orangutan Quarantine & Rehabilitation Centre near Medan, in North Sumatra. Over 170 of these have been released since 2003 at the SOCP reintroduction centre in Jambi province, and since 2011, 105 have now been reintroduced to the forests of Jantho, in Aceh province.