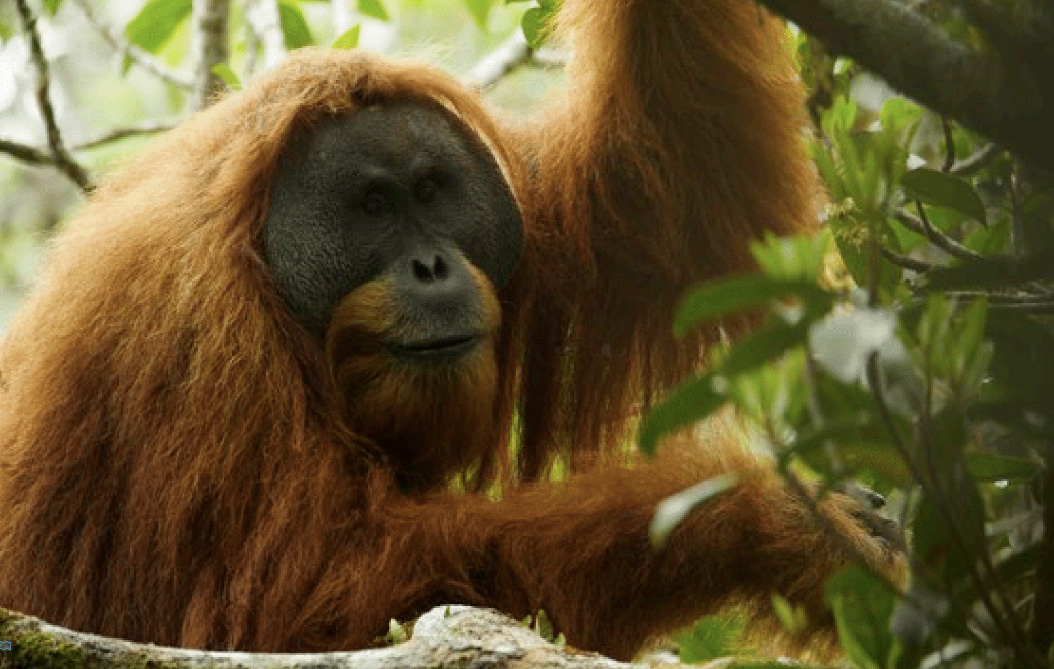 A team of Indonesian and international scientists have described a new species of orangutan, in a paper published on November 2nd in the scientific journal Current Biology. The researchers demonstrate that the Tapanuli orangutan, Pongo tapanuliensis, is genetically and morphologically distinct from both Bornean (Pongo pygmaeus) and Sumatran orangutans (Pongo abelii), and is therefore a separate species. According to the findings, the Tapanuli orangutan is in fact more closely related to the Bornean orangutan than it is to the Sumatran orangutans living further north, in and around the Leuser Ecosystem, in Aceh and North Sumatra Provinces. The three orangutan species —Bornean, Sumatran and Tapanuli—began to diverge from their common ancestor about 3.4 million years ago.

“It is fascinating that this population of orangutans differs so much from the orangutans in the north of Sumatra, and that even in the 21st century a new species of great ape has been discovered” stated Dr.Ian Singleton, Director of the Sumatran Orangutan Conservation Programme (SOCP),who have worked on improving protection of the Tapanuli orangutans and their habitat since 2005.

Tapanuli orangutans are now only found in the Batang Toru Ecosystem in the North, Central and Southern districts of Tapanuli, in the province of North Sumatra, south of Lake Toba. This small remnant population of Tapanuli orangutans survives in only about 1,100 square kilometers of remaining habitat. Mining concessions, a proposed hydrodam, encroachment, and illegal logging all continue to threaten the Tapanuli orangutans’ habitat, and hence the existence of the new species.

With less than 800 individuals left, and the population already divided over 3 forest blocks separated by roads and agricultural land, urgent conservation efforts are needed now to ensure the survival of the Tapanuli orangutan."Despite only just now being described, with so few individuals left, the Tapanuli orangutan is already the most endangered great ape species in the world" stated Matthew Nowak, co-author of a recently published‘Population Habitat Viability Analysis for Orangutans’. "Orangutans reproduce extremely slowly, and if more than 1% of the population is lost annually this will spiral them to extinction", added Prof. Dr. Serge Wich, of the IUCN/SSC Primate Specialist Group’s Section on Great Apes.

"We have worked with the local governments in Tapanuli since 2005 to socialize the various environmental services that the Batang Toru Ecosystem provides for local communities living near the forest, and their livelihoods, and in 2014 the Government finally granted protection status to most of the forest",stated Burhanuddin, who focuses on community awareness and local stakeholder relations for the SOCP.

“We now need to focus on reconnecting the 3 remaining key populations of the Tapanuli orangutan through corridor development. The most critical habitat area for the species, with the highest densities of orangutans, is not currently protected in any way, and in fact is actually scheduled for development of a large new hydrodam. And don’t forget this is an area with one of the highest earthquake densities inSumatra”, emphasized Kusnadi, newly elected Chairman of the Sumatran Orangutan Conservation Forum (FOKUS).

“For sure there a lot of work to be done to make sure we the Tapanuli orangutan does not go extinct in the same century in which it is first described, but I am confident that with close collaboration with the Indonesian Government, and especially with local stakeholders, we can make this joyful news a conservation success story”, addedDr. Gabriella Fredriksson, who has coordinated the SOCP’s conservation efforts in Tapanuli since 2006.

Quick background−Orangutans are great apes, along with humans, gorillas, chimpanzees and bonobos;
−With less than 800 individuals remaining, the Tapanuli orangutan is now the most endangered great ape species in the world, more endangered than the mountain gorilla, which isa sub-species of the eastern gorilla;
−Both Sumatran and Bornean orangutans are also listed as Critically Endangered on the IUCN Red List of Threatened Species, and less than 14,000 Sumatran orangutans remain in Aceh and North Sumatra provinces;
−The Sumatran Orangutan Conservation Programme (SOCP) is implemented by theSwiss-based PanEco Foundation and Indonesian partner NGO Yayasan Ekosistem Lestari (Sustainable Ecosystem Foundation),working with the Government of Indonesia.

Media Kit
Contains a STRICTLY EMBARGOED copy of the Current Biology paper, photos, maps,video clips (including a raw version with no voiceover) and supporting materials: https://www.dropbox.com/sh/cji32c8ckjqz5qj/AADmSEFKOrcXkHVnAxGIjxp8a?dl=0
NOTE: For use of photos by the following photographers, permission should be requested as follows:
•Andrew Walmsley:<email hidden; JavaScript is required> Tel: +44 7450 192831
•MaximeAliaga:<email hidden; JavaScript is required>Tel: +33 683549688