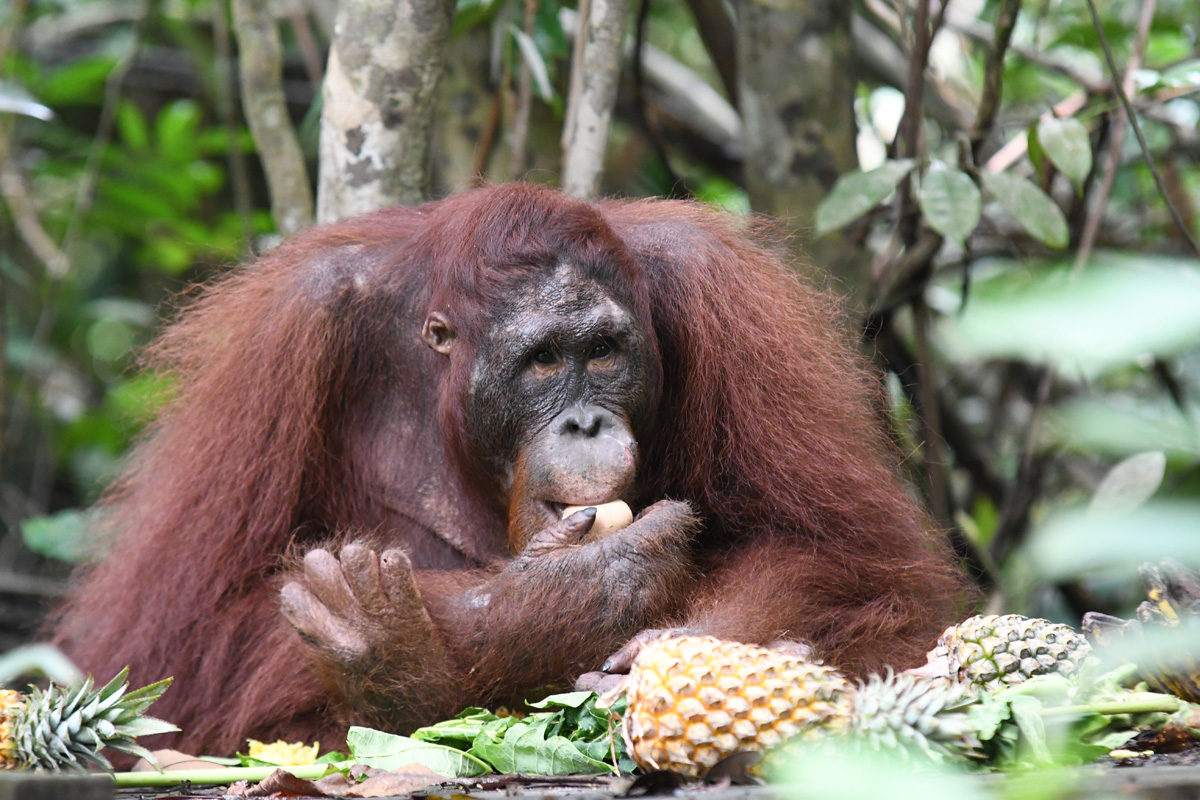 Beni, Orangutan Jungle School superstar and internationally beloved orangutan, is facing his greatest challenge yet – life on a pre-release island. In classic Beni fashion, less than two months into his stay, he has already gotten himself at the centre of the drama.

Read about Beni's move to the island here.

Beni gained attention from the public for his forest school antics and banana-centric love affair, but at nearly eight-years-old it was time for him to leave the comforts of the BOS Foundation’s Nyaru Menteng Orangutan Rehabilitation Centre to move on to the pre-release stage of his rehabilitation. Him and seven other orangutans were taken to Badak Besar Island in the Salat Island Cluster, Central Kalimantan, in mid-November. The first months of observation on the new arrivals yielded positive results, with the island technicians reporting that they were readily exploring their new home and putting the skills they learned in forest school to use.

However, life on the islands is designed to be different from forest school, to really challenge the residents so that they can learn the hard lessons before they are in the unforgiving, wild forests of Borneo. In forest school, the “threats” are for show only and the surrogate mothers closely watch and diffuse serious conflicts between peers; this isn’t the case on the islands.

One day at the end of December, Beni learned his first hard lesson.

Following their regular schedule, our island technician team arrived at a feeding platform to drop off supplementary food and observe the behavior of the orangutans. Per usual, many of the island residents appeared as soon as they heard the sound of the boat engine arriving. Many of Beni’s friends, from Cinta to Meryl, gathered around and Beni quickly joined them.

He acted as if nothing was wrong, but our team found themselves in utter disbelief. Beni had been in a fight, and he had clearly lost. He had on him small nicks, a deep gash over his brow ridge and his upper lip was completely split. But here he was, patiently waiting for food, probably hoping for some bananas.

Despite his surprisingly normal behavior, our team took swift action. Assisted by drh. Greggy Harry Poetra, a veterinarian from Nyaru Menteng, they moved Beni to the nearby transit complex for treatment.

Upon closer inspection, it was clear that Beni's wounds were caused by a canine bite that slashed his left eyebrow and upper lip. Harry and Cinco, two island technicians, reported that they saw Beni near Petruk in the recent past and he was their prime suspect.

Beni was actually placed on a different side of the island from Petruk, an 11-year old male, and the two sides of the island are separated by a manmade canal is flooded with river water. However, a build-up of silt, combined with a sudden drop in the water level, made it temporarily possible for orangutans to cross the canal.

Technicians shared that Petruk did not appear to be fighting with any of the other orangutans on the island. They suspected that the fight was started when Beni stood up to Petruk over food. Beni had known Petruk from forest school, before Petruk grew his flanges (cheekpads) and became a fully mature adult male. Learning how to navigate the social hierarchy is an important lesson for any young orangutan and in this instance, Beni made the wrong decision. But that is what these islands are for, for the orangutans to learn while the BOS Foundation teams are still around to help them back up when they make mistakes!

Vet Greggy said the bite wounds were only skin deep and did not reach the muscle tissue. Although the cut was long and looked a bit worryingly wide, no blood vessels ruptured, hence Beni’s life was not in danger. However, had it been left untreated, there was a potential for infection, so a treatment plan was made and executed immediately.

To expedite his recovery, after Vet Greggy stitched up the wounds, the team applied a special, topical ointment and gave Beni anti-inflammatory drugs and antibiotics for a week. While he is young and healthy, these extra measures were important because playful and curious Beni could not resist the urge to scratch and pick at his stitches. The poor vet team even had to stitch him up for a second time when he opened the wound once!

During his recovery, Beni was given a diet rich in protein and vitamins, such as tempeh, milk, eggs, and fruit, especially bananas, his favorite fruit. The lack of physical activity in the temporary cage compared to on the island resulted in Beni gaining a little weight. "But we can still say that his weight gain is normal for the situation, and he is still not overweight," stated Vet Greggy.

After about three weeks of treatment, Beni's wounds healed completely and he was ready to return to the pre-release island. Our team finally released Beni back on Badak Besar Island in late January.