The four orangutans (two males and two females) were rehabilitated at the BOS Foundation’s Nyaru Menteng Orangutan Rehabilitation Centre. These deserving orangutans are the first to be released by BOS Foundation in 2022. Read more about orangutans Dius, Jazzboy, Itang, and Sebangau here.

Dr. Jamartin Sihite, BOS Foundation CEO said, “The BOS Foundation is very happy to finally be able to release these orangutans, all of whom have gone through a lengthy rehabilitation process and are now ready to live in the forest. We see it as a wonderful stroke of luck that this release will also commemorate International Day for Biological Diversity. We are currently in the third year of the COVID–19 pandemic, but we are still fully committed to safely releasing orangutans from our rehabilitation centers into the forest. The pandemic may have presented a new obstacle for us, but it is not insurmountable and it will not stop us from working to save the orangutans and their habitat.”

Click on the thumbnails to see full size images.

The eventful release has been wonderfully described by Andri Kornelius, Communications Team Member at Nyaru Menteng:

There are certain moments you never forget, moments that hold special meaning and evoke strong emotions. I had such an experience during the 39th orangutan release conducted by the BOS Foundation in Central Kalimantan on May 18, 2022. As a member of the BOS Foundation’s communications team, this was a personal and meaningful experience for me. Our latest orangutan release was made possible through a collaborative effort between the BOS Foundation, the Central Kalimantan Natural Resources Conservation Agency (BKSDA), and the Bukit Baka Bukit Raya National Park (TNBBBR) Agency. The operation involved the release of four orangutans into TNBBBR.

What got me so emotional was the fact that I had been part of the rehabilitation process for all four of these orangutans. I had closely followed their progress over the years, especially that of Dius. When he was less than two years old, Dius arrived at the Nyaru Menteng Orangutan Rehabilitation Centre as an orphan. Since I joined the BOSF team, I have documented his progress as I was tasked with telling his story for the individual donors who supported his rehabilitation process.

Before being released to the wild, all four orangutans lived semi-independently on pre-release islands. It was there, at the end of January, that the release process began when the four orangutans had to be collected from the pre-release islands. Catching Dius on Badak Kecil Island in particular was especially eventful. When we tried to approach Dius, his head was surrounded by bees! It appeared that he had just found and enjoyed some forest honey, and the angry bees were trying to attack him and anything that came near. Administering the anesthesia was extremely difficult, as our technicians had to venture deep into the island and even had to swim to reach him. Following several months in quarantine, to ensure they did not carry any diseases with them into the forest, the orangutans were finally ready for their true release.

Dius and Jazzboy were the first to be anesthetized, followed by Itang and Sebangau. All four orangutans were then transferred into transport cages. The team departed from Nyaru Menteng at 6pm and arrived at Tumbang Hiran Village, in Marikit sub-district, at around 2am. The next morning, our team continued the trip through the Hiran Watershed by kelotok, or boat. This leg of the journey proved to be quite difficult, due to wet weather conditions and receding river waters. Our team was put to the test, to the very end! Some sections of the river were quite tough to navigate and took a long time to pass. The wet weather made it even harder on our team, with continuous rainfall for more than an hour hampering the team’s efforts.

We continued our journey until we arrived at Camp Hiran around 4pm. The team rested for less than half an hour, then continued on for about an hour to a release point upriver from camp. The journey from the camp to the release point was even more tricky, as we had to pass through several rocky areas of the river that were quite shallow. Our team of technicians and the boat skipper had to work hard to get the boat through unscathed.

When the team arrived at the release point, it was Sebangau’s cage that was opened first. She immediately exited the cage and climbed up a tall tree to relax on its branches. Handsome Dius was the next to be released; he rushed straight up the same tree as Sebangau. Dius was very interested in Sebangau and the two were seen copulating. They then explored the surrounding area and ate rattan piths together. Dius constructed a nest in a forest rambutan tree, ate some of its fruit, and rested near Sebangau.

At another location in the forest, our team opened the cage for Itang, who immediately climbed up a tree. She came down a short time later, but then climbed back up again to make a nest. Surprising everybody, instead of a climbing a tree, nosy Jazzboy turned around immediately after his release. It seemed that Jazzboy was annoyed at being stuck in the cage for so long, so he quickly upended the cage and banged on a big log, before finally wandering off to explore his new forest home.

We had completed the release process by sunset and headed back to Camp Hiran. The return journey was much more challenging, as the day was turning dark and visibility was limited. The rapids we had previously passed were now even more dangerous, with an increased risk of the boat capsizing. The trip back to the camp had me very worried. The boat became stuck in the middle of a rapid when it became lodged between large rocks and I prepared myself for the worst. The technicians and I tried to help by pushing the boat. The skipper controlling the boat had to rely completely on our team members who knew the river conditions well enough to guide us back to camp. Luckily, after carefully navigating many more dangerous rapids, we were able to return to the camp at night.

This trip had me riding an emotional roller-coaster throughout as one moment I would experience overwhelming happiness and, the next, nail-biting anxiety and apprehension. My fear of the boat sinking and the feeling of panic when it got stuck between the big rocks in the middle of the river really got my adrenaline pumping! However, it was worth every challenge we faced in order to give these four orangutans the opportunity to thrive and breed in the forest. I also hope this inspires more people to care about orangutans and the environment and take action in their daily lives. It is on us all to help save orangutans! 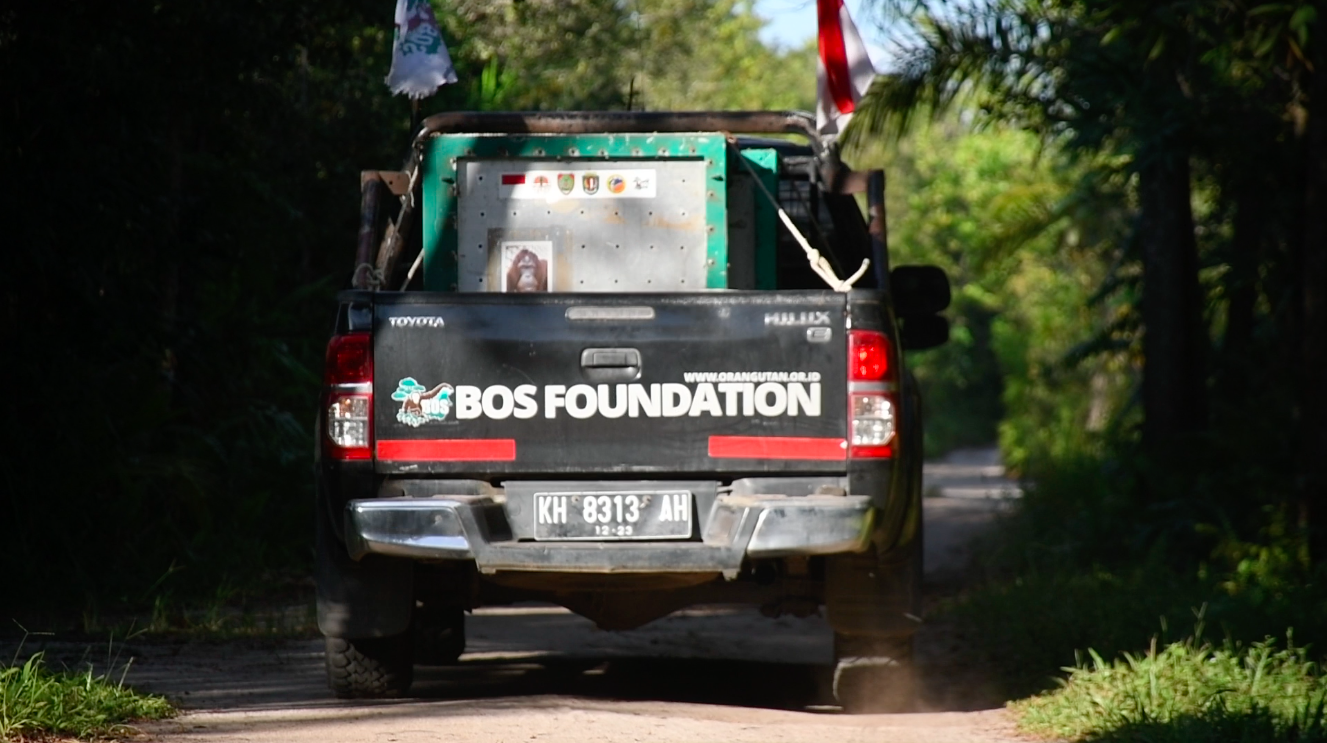