Visit our Release Archive to read, watch and learn about previous releases by the BOS Foundation. 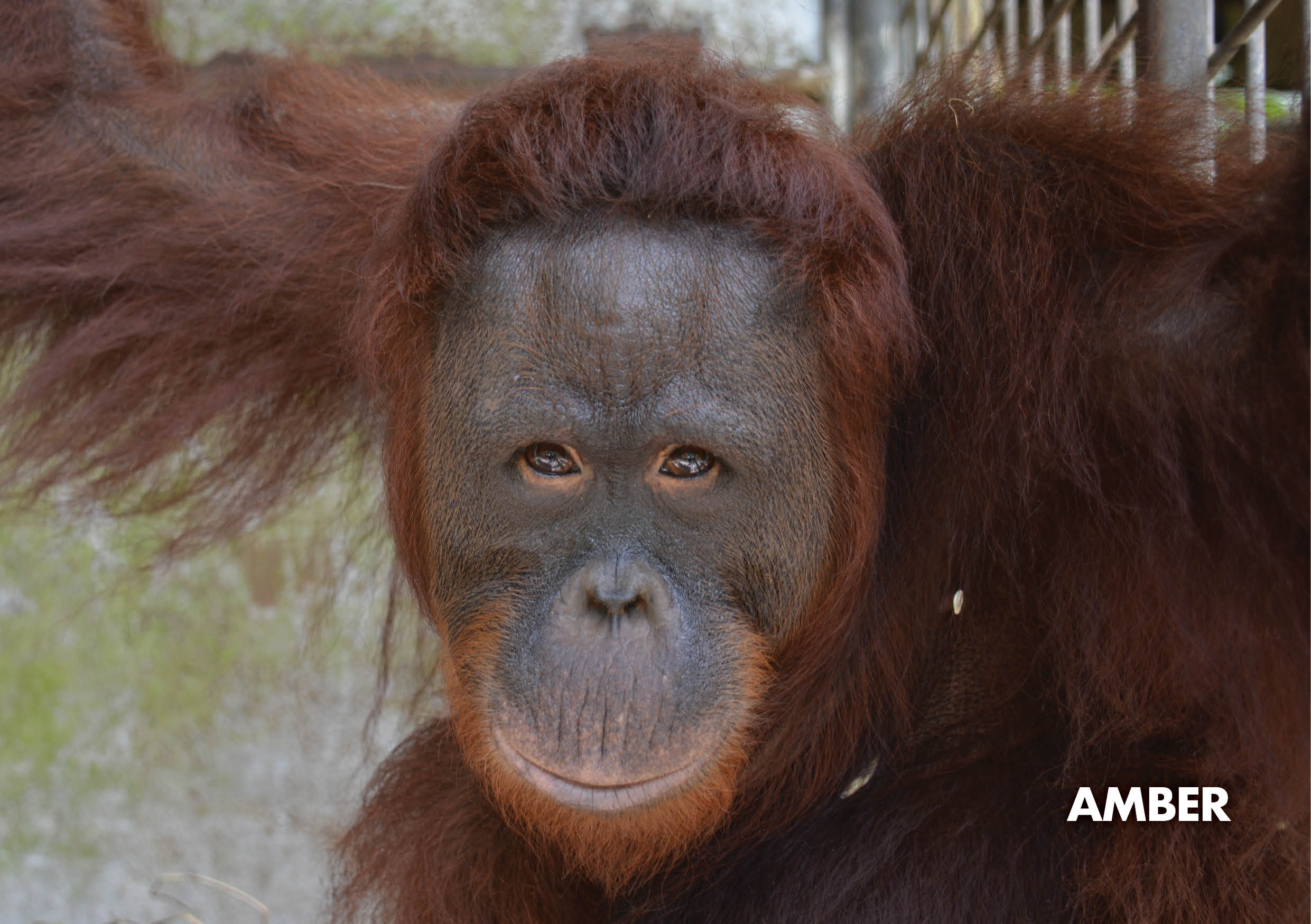 Amber was surrendered by an oil palm plantation employee in East Kotawaringin Regency, Central Kalimantan. This orphaned baby female arrived at the Nyaru Menteng Orangutan Rehabilitation Centre on 11 May 2006, weighing only two kilograms at the tender age of six months.

Following quarantine, Amber began her rehabilitation journey in Forest School and in a matter of years graduated from this first step of the long process. She advanced to a pre-release island when she was moved to the Salat Island Cluster on 17 December 2019. While on the island, Amber grew to become an active orangutan who loved to explore and she learned to build sound nests. Amber is not aggressive and she gets along well with other orangutans, specifically, Barlian, with whom she has formed a friendship.

Amber is now 16 years old and, after more than 15 years of rehabilitation at Nyaru Menteng, is ready to embark on a new adventure in the Bukit Baka Bukit Raya National Park, Central Kalimantan. 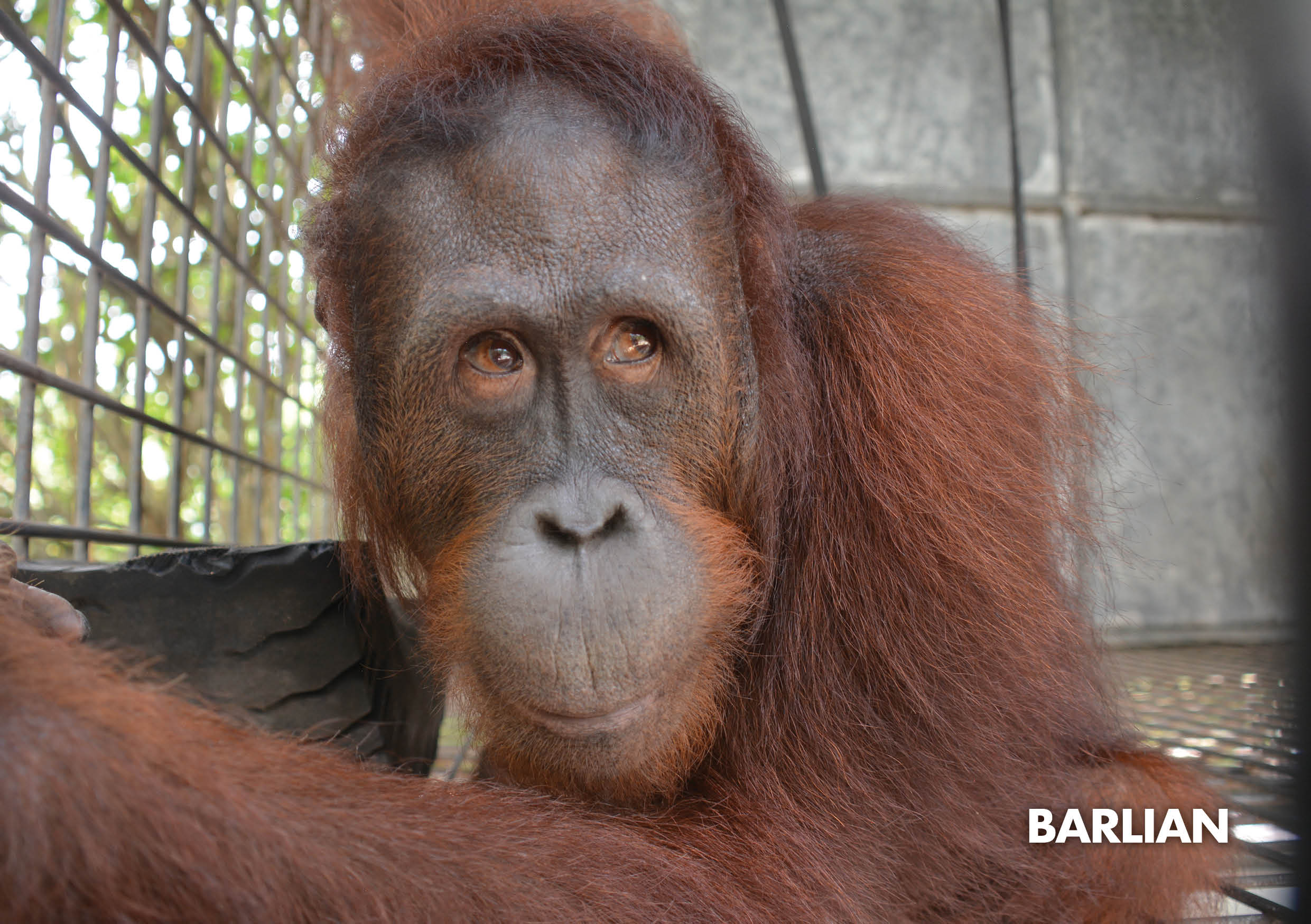 Barlian was allegedly found by a plantation employee on the side of a road, near a small forest alongside an oil palm plantation block of PT. MSAL, in Central Kalimantan. He was reported alone and in a weak condition. He was handed over to authorities on 20 June 2013, after being kept by a villager for two weeks. He arrived at Nyaru Menteng aged two years and weighing 4.1 kilograms.

After completing Forest School, Barlian proceeded to the pre-release stage of rehabilitation in the Salat Island Cluster, beginning on 17 December 2019. He was taken to the island with his best friend, Amber. Barlian was very active on the island and grew to be an avid explorer. He spent most of his time in tall trees and paid little attention to the humans below. While not a dominant orangutan, Barlian is still able to fend for himself when needed.

Barlian is now 10 years old and, after an 8-year rehabilitation journey at Nyaru Menteng, is ready to explore the Bukit Baka Bukit Raya National Park as a true, wild orangutan. 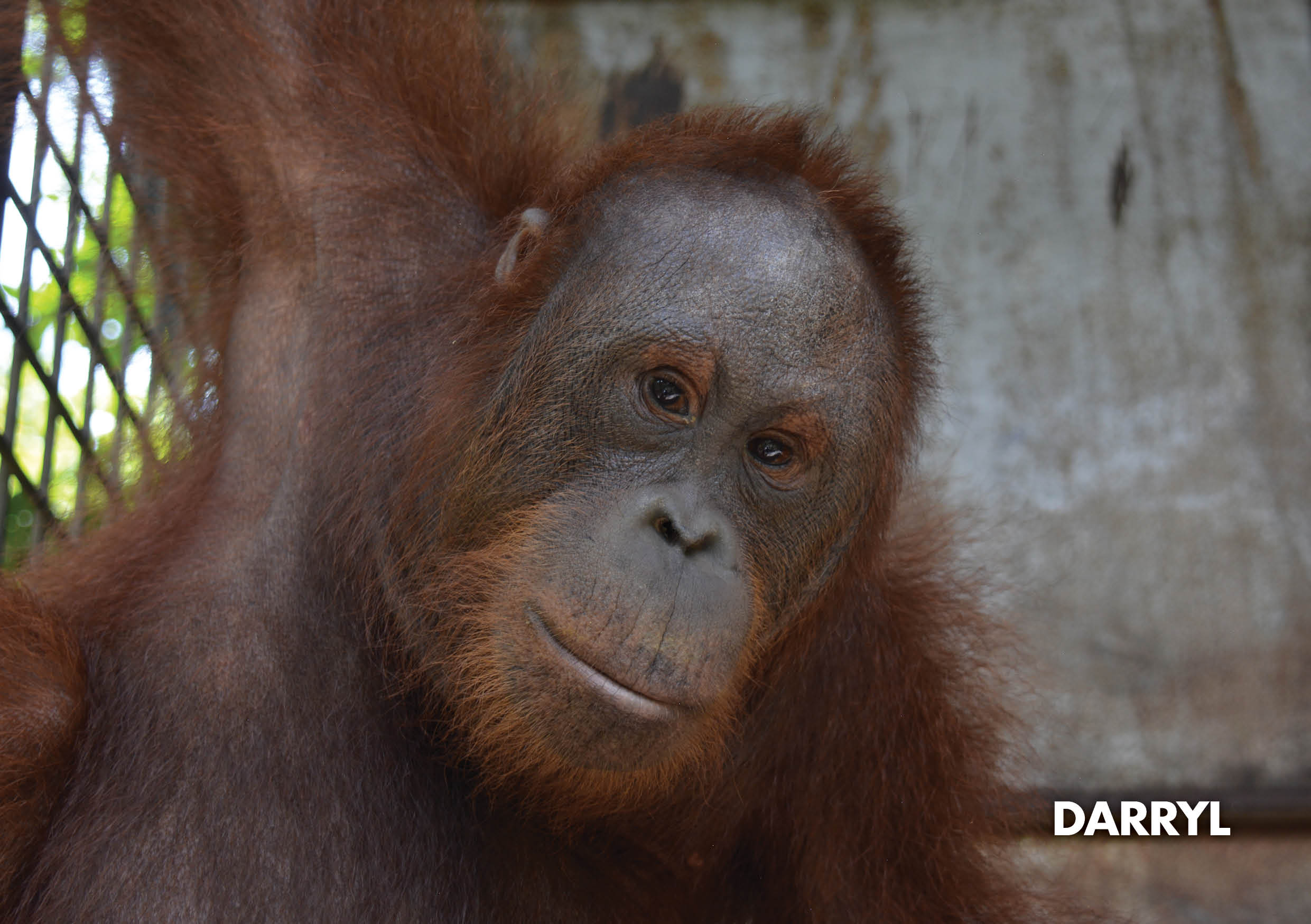 Darryl was surrendered by a resident of Sampit, Kotawaringin Timur Regency, Central Kalimantan on 11 July 2010. The resident had allegedly purchased the male baby from a person in Bali, however, after one week of caring for the baby had decided to hand him over to the Central Kalimantan BKSDA. At the time, Darryl weighed only 2.4 kilograms and was estimated to be around six months old.

After completing Forest School, Darryl underwent the pre-release stage of rehabilitation in the Salat Island Cluster, starting on 17 December 2019, alongside friends Amber and Barlian. While Darryl is not an aggressive orangutan, he is very cautious and guarded. He has explored all over the island and is skilled at brachiating and climbing trees. He has honed his foraging skills to identify edible forest fruits on the island, an important skill that will help him survive and thrive when he is released to the wild.

After an 11.5-year rehabilitation journey, Darryl is now 12 years old and is ready to freely explore the Bukit Baka Bukit Raya National Park. 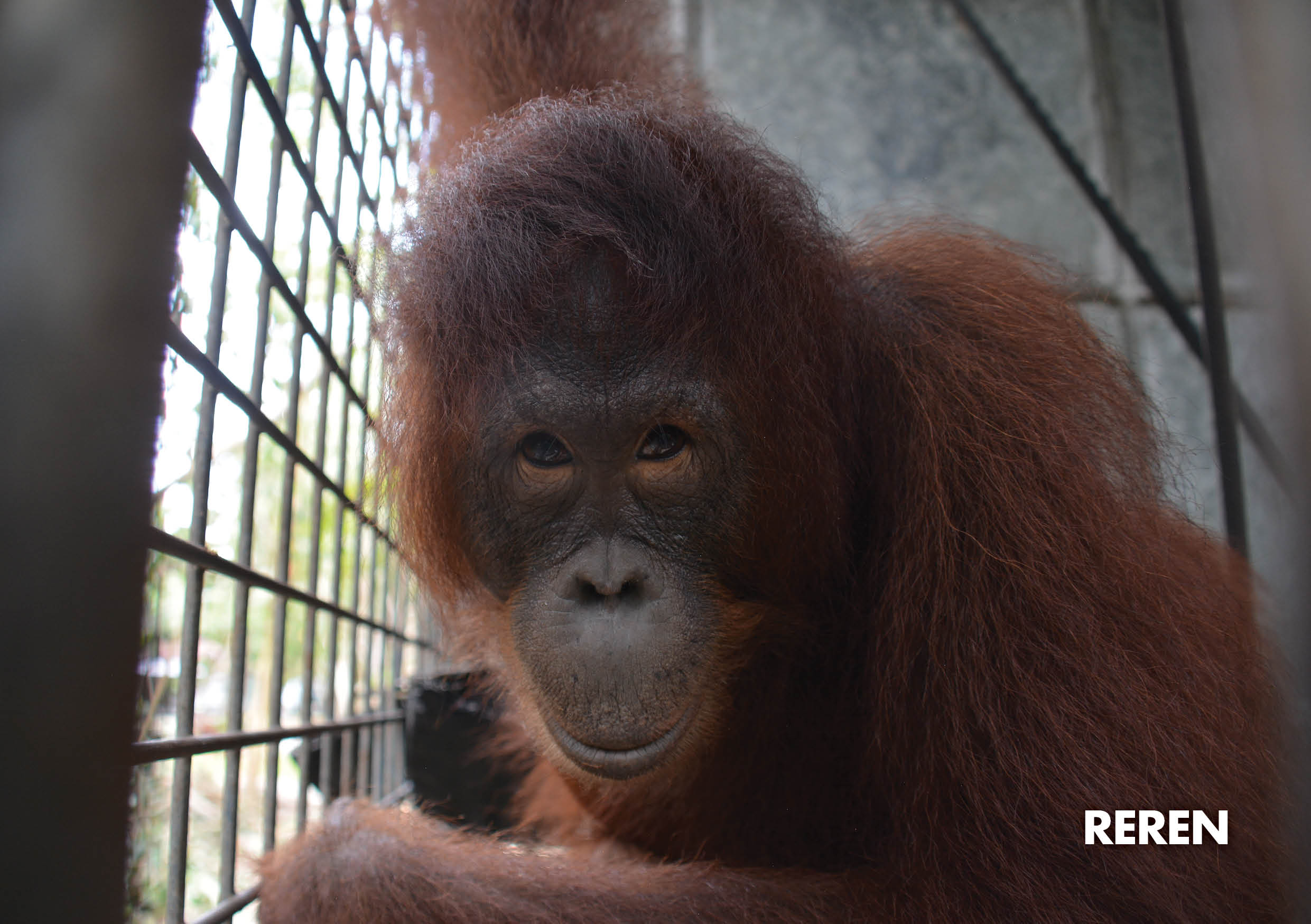 Reren was once held captive by a resident of Jabiren, Kapuas Regency, Central Kalimantan, who claimed to have found her crawling alone on a rice field embankment near the Kahayan River. At the time, 100 hectares of forest had just been cleared in the area for agricultural purposes, with plans for another 150 hectares to be cleared to create a 250-ha oil palm plantation. Through a joint operation by the BKSDA wildlife rescue team and the BOS Foundation, Reren was rescued on 17 July 2014, aged 12 months and weighing three kilograms.

After completing all stages of Forest School, Reren progressed to the pre-release stage of rehabilitation in the Salat Island Cluster on 7 November 2019. This charming female is gentle and was frequently spotted socialising with other orangutans. She can build sound nests and spends most of her time up in the trees. An active explorer, Reren usually ignores humans when they are observing her. 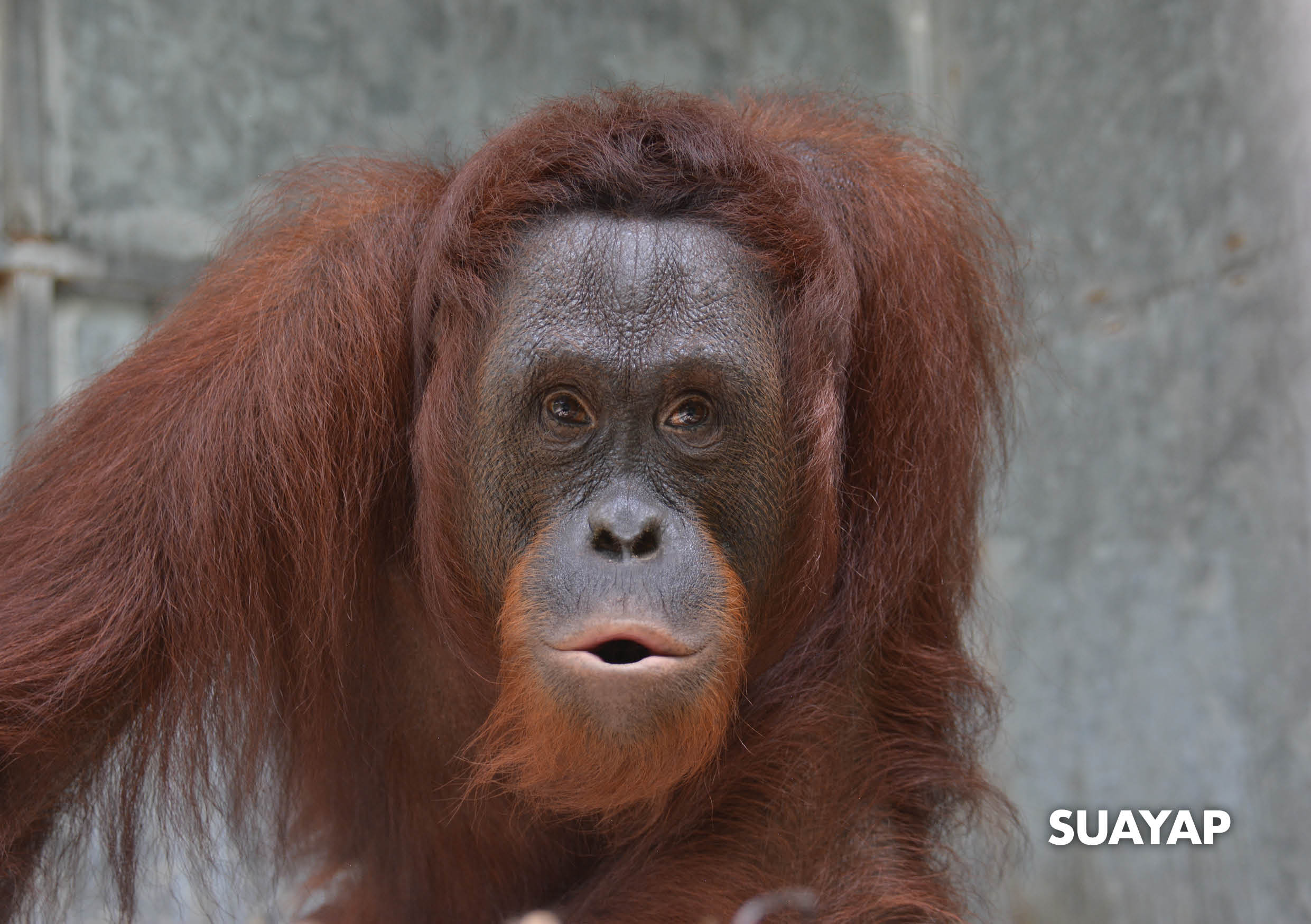 Suayap was repatriated from Thailand and arrived at Nyaru Menteng on 22 November 2006. She was estimated to be about six years old and weighed 23 kilograms. It was due to her advanced age for the rehabilitation process and her behaviour that she was unable to enter Forest School.

After a period of quarantine and many years of using enrichment to develop her survival skills, Suayap was given the opportunity to proceed to the pre-release stage of rehabilitation in the Salat Island Cluster on 26 June 2019. While not aggressive by nature, Suayap is still capable of standing up for herself when needed. She actively explores her surroundings, forages well, and excels acting appropriately for an orangutan no matter the circumstances.

Suayap is now 22 years old and, after completing 16.5 years of rehabilitation, is ready to start a new life in the forest of the Bukit Baka Bukit Raya National Park.

Randy was rescued from captivity in a joint operation by the BKSDA wildlife rescue team and the BOS Foundation, in Timpah Village, Kapuas District, Central Kalimantan on 16 June 2007. When he arrived at Nyaru Menteng, Randy was estimated to be about five months old and weighed three kilograms.

After successfully completing all stages of Forest School, Randy continued his rehabilitation journey on a pre-release island in the Salat Island Cluster, starting on 29 January 2020. Randy cares little for human presence, but gets along well with other orangutans. He has actively explored the forested island and spent the majority of his time brachiating in tall trees while foraging.

Randy is now 14 years old and is ready to join his friends and enjoy freedom as a true, wild orangutan in the Bukit Baka Bukit Raya National Park. 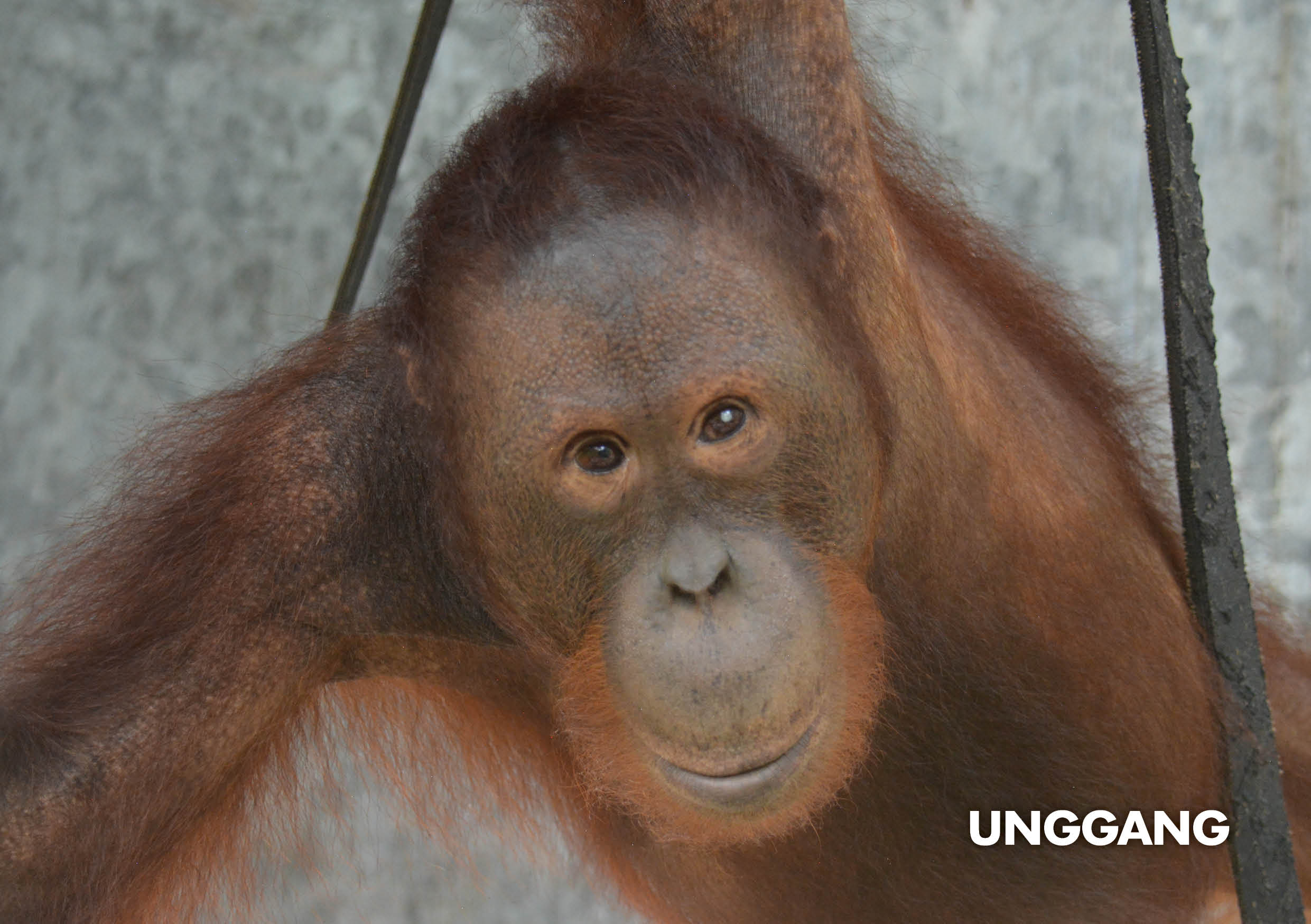 Unggang was surrendered by a resident of Karya Unggang Village, Katingan Regency, Central Kalimantan on 17 December 2014. He arrived in poor condition, with burn marks on his hands, feet, and part of his face; leading us to conclude that he was a victim of a forest fire. Before being handed over, Unggang was kept in a chicken coop for several days. Upon arrival at Nyaru Menteng, he was estimated to be about three years old, and he weighed 6.5 kilograms.

After successfully completing Forest School, Unggang continued to learn on the pre-release island of the Salat Island Cluster, starting from 5 February, 2020. On the island, Unggang avoided humans and spent the majority of his time exploring his surroundings and foraging for natural foods. He also actively moved through the trees and built strong, neat nests.

Unggang is now 10 years old and, after a 7-year rehabilitation process, is ready to live wild and free in the Bukit Baka Bukit Raya National Park.