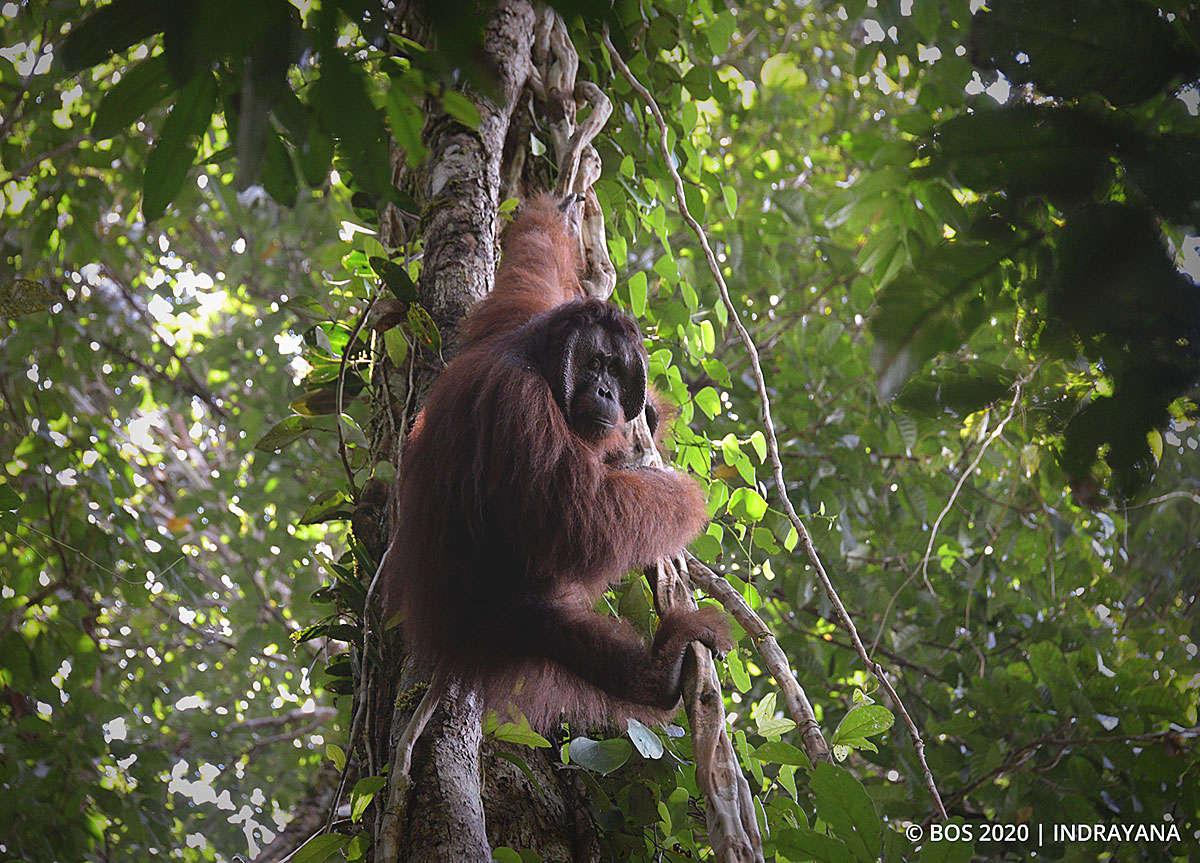 The three orangutans were transported from the Nyaru Menteng Orangutan Rehabilitation Centre and taken directly to the release site in an approximate 15-hour journey. This release was attended by the Director of Biodiversity Conservation of the Directorate-General of Natural Resources and Ecosystem Conservation of the Ministry of Environment and Forestry, who also inaugurated the new orangutan monitoring camp. The camp was given the name ‘Lewun Kahio’, which means ‘Orangutan Home Village’ in local Dayak language.

Indra Eksploitasia, the Director of Biodiversity Conservation of the Ministry of Environment and Forestry, appreciated the effort involved in bringing the orangutan release to fruition; “By releasing these three orangutans, all of whom have completed the rehabilitation process, we hope to increase the orangutan population in the wild, community participation in supporting orangutan conservation, and enhance collaboration among the involved parties, particularly the existing communities around the forest area, to protect biodiversity. We acknowledge that conservation efforts require collaboration; from the local government, the ministry, other institutions, local communities, business people, and community institutions, so that nature and the biodiversity within are well preserved. For that, I would like to express my highest gratitude and appreciation to those who have helped and supported the release of these three orangutans.

“I had the opportunity to come to the location and accompany the orangutan release team, and to inaugurate the Lewun Kahio orangutan monitoring camp. This release team consists of personnel from the TNBBBR Authority, the Central Kalimantan BKSDA, and BOS Nyaru Menteng, with the task of ensuring that the released orangutans have the opportunity to thrive in the forest. I sincerely hope that this new monitoring camp will help raise the enthusiasm and performance of the team.”

Agung Nugroho, S.Si., M.A., Head of the Bukit Baka Bukit Raya National Park Authority (BTNBBBR), added; “Several studies were conducted to ensure the suitability of the TNBBBR as a home for rehabilitated orangutans. Many factors had to be taken into account, such as the availability of natural food, the altitude, the lack of pre-existing wild orangutan populations, the habitat carrying capacity, and the distance from human activity. This was done to ensure that released orangutans have every opportunity to thrive in the forest, and hopefully found a new population.”

Following the release, the Post-Release Monitoring (PRM) team immediately set about monitoring each individual orangutan. The PRM team will continue to intensively monitor the three released orangutans over a two-month period, to ensure they are adapting well to their new environment.

Since 2016, the Bukit Baka Bukit Raya National Park Authority, the Central Kalimantan BKSDA and the BOS Foundation have worked in collaboration to see the release of 168 orangutans. With the release of these latest three, a total of 171 orangutans have been released in the area, including three that were translocated from conflict areas.

Dr. Ir. Jamartin Sihite, MSc., BOS Foundation CEO, said; “In the last few years, we have released rehabilitated orangutans in a very high number and intensity. Now is the time for us to regroup and prepare the remaining, young orangutans that we continue to care for in our rehabilitation centers. We need to take this opportunity to find forests that qualify as release sites, to accommodate the hundreds of orangutans still waiting to be released. We expect support from the government and the private sector to realize this effort, because conservation is not a one-man show. We will not succeed in achieving our conservation goals without the cooperation of all parties concerned.”

To ensure a successful conservation effort involving all stakeholders, the BOS Foundation continues to work closely with the Government of Indonesia at all levels, particularly the Ministry of Environment and Forestry, the Central Kalimantan Provincial Government, the governments of Katingan and Pulang Pisau Regencies, the Central Kalimantan BKSDA, and the TNBBBR Authority.

The BOS Foundation would like to acknowledge the invaluable support of the communities of Katingan and Pulang Pisau Regencies, our official global partner organizations (BOS Australia, BOS Germany, BOS Switzerland, BOS UK, and Save the Orangutan), private-sector supporters like PT. BNI Tbk., PT. SSMS Tbk., and PT. Kayu Waja. We would also like to thank like-minded conservation organizations such as Orangutan Outreach and individual supporters from around the globe who contribute significantly to our work and conservation efforts in Indonesia.

ABOUT THE BOS FOUNDATION

Founded in 1991, the BOS Foundation is a non-profit Indonesian organization dedicated to the conservation of Bornean orangutans and their natural habitats, working together with local communities, the Ministry of Environment and Forestry of the Republic of Indonesia, and international partner organizations.

This is the 21st release conducted by the BOS Foundation in the TNBBBR since August 2016, and takes the total population of released orangutans in the TNBBBR to 168.