Jan 2014 -- Since his arrival at Nyaru Menteng, Sura’s health had been up and down. There were times this past month when he was sick with a slight flu but now the team is delighted to see that Sura’s health is getting better and better.

Read the story of Sura's arrival... and see why he is so special!

Intensive care by the Nyaru Menteng Medical Team has shown great results. The wounds on his hand have been prioritized and have healed very well. The entire team at BOS Nyaru Menteng is happy to share this wonderful news! 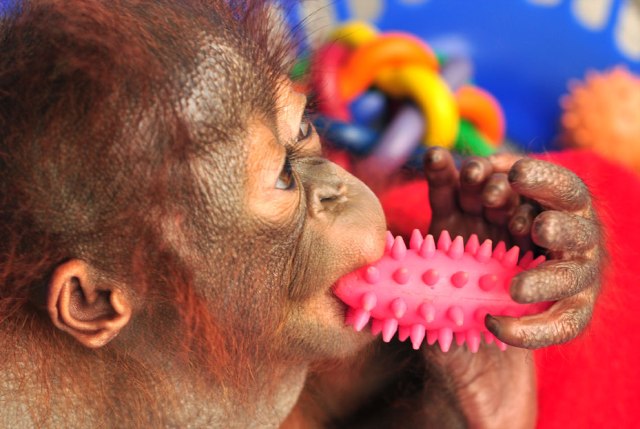 On November 17, the eight-month-old baby orangutan, who now belongs to the Nursery Group, suffered from flu and shortness of breath.  The babysitters had to bring him back to the main clinic when the medical team decided that intensive care and nursing were needed to restore Sura’s health.

After intensive medical care and treatment, Sura finally made a full recovery.  The wounds on his fingers are now healed, his flu is gone, even though sometimes his throat sounds a little strained during cold or humid weather. 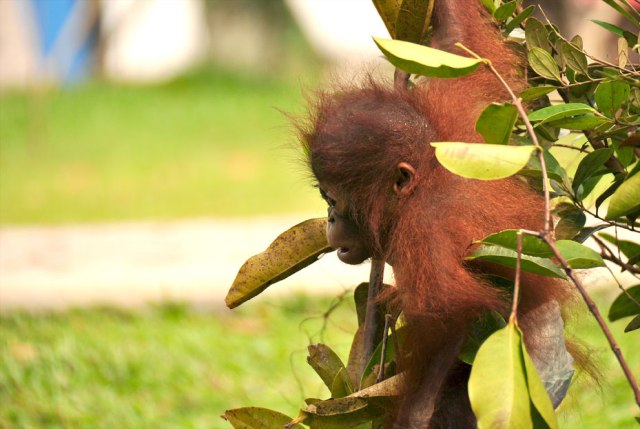 While being cared for at the medical clinic, Sura was quite active and he loved playing both in and outside the clinic.  While his babysitters kept a close eye on him, Sura started climbing the tiny trees surrounding the clinic.  This is a great sign not only of his health but of his instinct to be in the trees.

Sura also has gained a bit of weight. He was 2 kg when he arrived and is now 3.6 kg.

Sura loves forest fruits and young leaves.  He will devour ehang and mesisin fruit which are in abundance at Nyaru Menteng. Vet Meryl told that on several occasions she tried to give him some banana, but he was not interested.  He even tossed them aside!  Sura surely remembers his wild upbringing more than we could ever have hoped.

Keep an eye on this little guy!  There's a Great Cheekpadder inside him waiting to grow up!   {:(|} 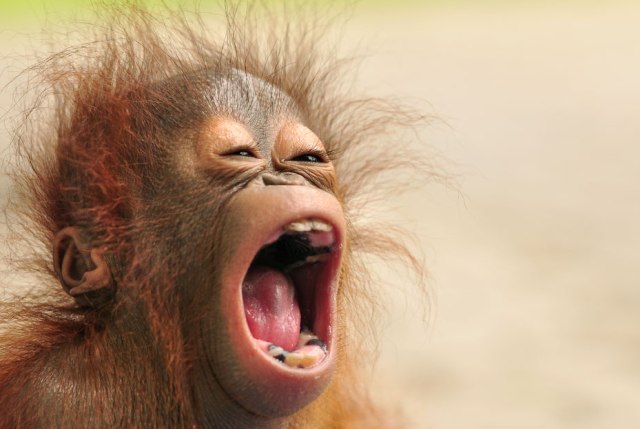 On December 7, 2013, Sura went back to join his friends in the Nursery Group.  This has brought so much joy to the staff because all their hard work has paid off.  Sura is now healthy again and hopefully he will remain healthy and happy as he begins the long period of rehabilitation to prepare him for life in the wild!