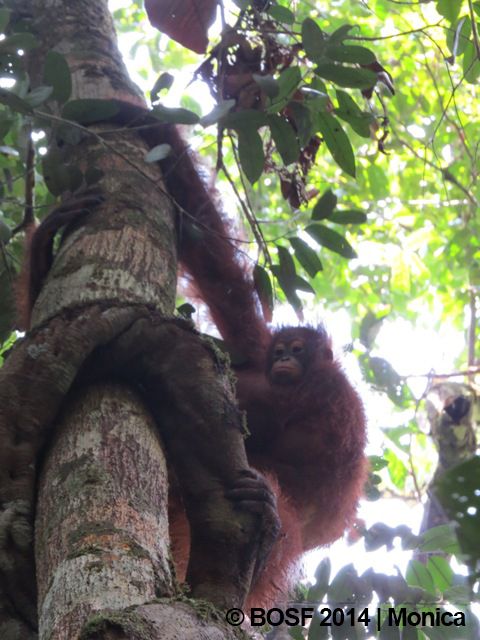 Kate hanging onto her mom, Kitty

Kitty and her daughter Kate were the 100th and 101st orangutans to be released into the Bukit Batikap Conservation Forest by the BOS Foundation in Nyaru Menteng. Learn more about the release program.

After their release in February 2014, they were gone for several days. The Monitoring Team tried to locate their position without luck. A few days later, their weak signal was picked up far away from the monitoring transects. The Team decided to follow the signal and try to locate them.

Kitty and Kate were found at 14.56, just four minutes before the transmitters turned off automatically. All our transmitting devices are pre-programmed and this allows us to follow the orangutans for a certain number of hours a day. The weather was not good with heavy rain and strong winds which caused some trees to fall. The Team, however, remained in the location where they found Kitty and Kate to ensure their wellbeing.

Kitty and Kate sheltered under the leaves from the rain, five meters from each other. They continued eating young leaves despite the weather. When the Team moved to avoid a falling tree, Kitty was made aware of the Team’s presence. She quickly grabbed Kate and threw branches towards the Team and kiss-squeaked.

Kitty quickly moved away from the Team, climbed a tree and hid behind the big tree trunk. When the Team persisted with their data collection efforts, Kitty once again kiss-squeaked and threw branches.

Seeing their wild behaviour, and also reviewing the weather situation which was becoming increasingly worse, the Team decided to leave the mother and child pair. They were healthy and really that is the most important factor to establish.

Orangutans are intelligent creatures who are very innovative when it comes to tool use. Mego, who was released on April 20 2014, was observed measuring the depth of Joloi River using a wooden stick.

Mego used a long branch to measure the river depth by dipping it into the water. He plunged into the water trying to cross the river but changed his mind after his stick floated off down stream.

Mego has been using this method ever since his time living on Palas Island, one of the pre-release islands close to Nyaru Menteng. This behaviour was also displayed by both Menteng and Danur , two orangutans who lived on Kaja Island. This is fascinating behavior which demonstrates how incredibly cognitive these great apes are.