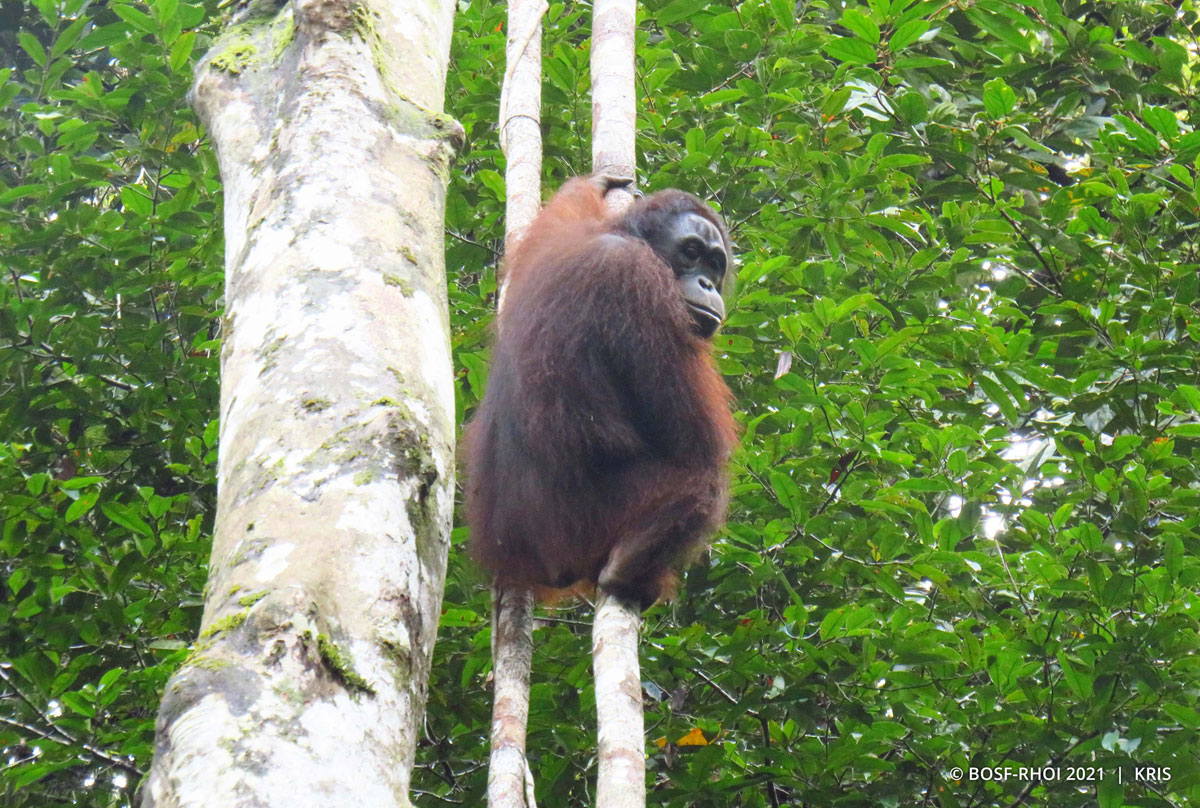 January 2021 — One day in the middle of September, we, the Post-Release Monitoring (PRM) team from Nles Mamse Camp in the Kehje Sewen Forest, East Kalimantan, embarked on one of our regular orangutan patrols. We set off early in the morning and headed towards Transect #21, walking along the forest trail until we reach an area known as Puncak Palem 1. The sun was high above our heads by the time we had reached our destination, and we decided to take a short break.

As we rested and chatted about the palm fruits blossoming all around us, a cracking noise suddenly pierced the air. We cautiously moved closer to the source of the sound, and as we approached, we saw two orangutans enjoying a hearty meal together!

Excited to have accidentally found two orangutans, we immediately began to observe them and collect data. After a while, we identified one of the orangutans as Leoni, a female released five years ago. We could not make out the identity of the other individual, however, aside from recognising him as a male, from his cheek pads.

Leoni looked relaxed as she slowly moved between trees, occasionally checking on the team watching her from below. Like other released orangutans, she was sensitive to our presence. Leoni demonstrated her foraging skills, eating Lithocarpus fruits with gusto! Her male companion, meanwhile, seemed to be annoyed with our presence and proceeded to kiss-squeak and break branches to voice his displeasure.

After eating fruit in one tree, Leoni suddenly climbed down to the ground and moved quickly across the forest floor. We collected up our gear in preparation to follow her, but she stopped in a grove of palms at the edge of a nearby cliff. We were relieved to be able to collect more data on Leoni while she busily ate palm shoots. As we paid attention to Leoni, we continued kept a close eye on the male orangutan who was also keeping Leoni in his sights. 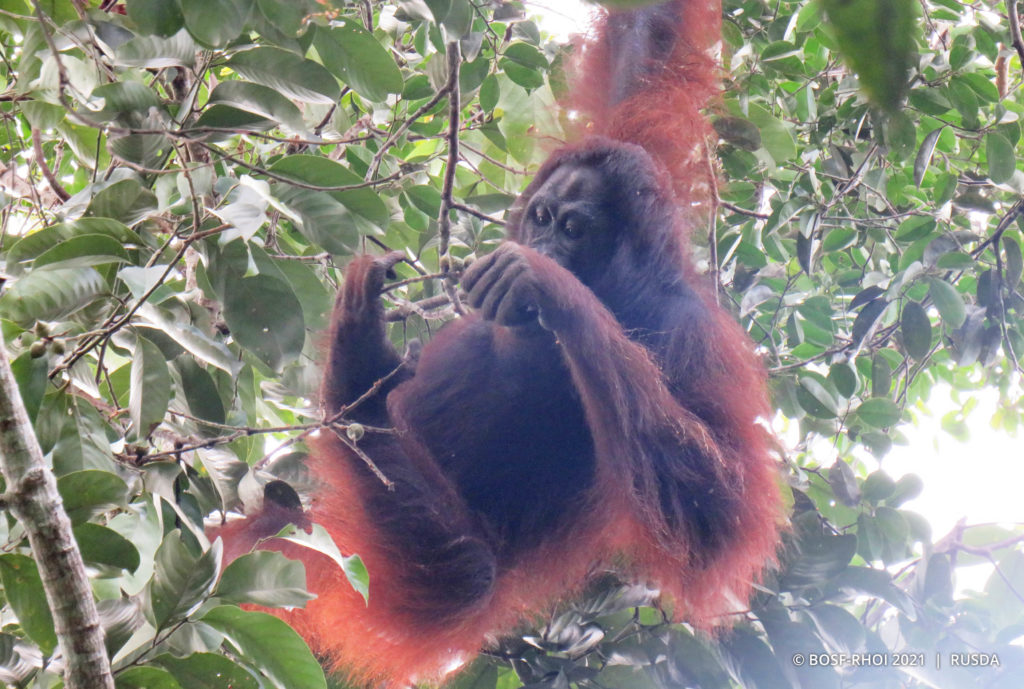 Leoni in a tree

Leoni continued to move down the ravine in search of palm shoots, with the male orangutan watching her from a distance. We followed her carefully down into the ravine, clinging to the small trees on the slope, trying not to fall.

At the bottom of the cliff, Leoni climbed a tree and began snacking on lianas and Macaranga fruits. We made use of our camera’s zoom functionality and binoculars to observe Leoni’s activities in the trees. Then, all of a sudden, the male orangutan rushed toward Leoni and, from the top of a tree, produced a loud kiss-squeak and began to shower us with broken branches! We didn’t have much choice but to take cover to avoid the falling branches.

Then, to really top things off, it began to rain! We quickly secured and stored all of the electronic equipment in our dry bags. We then donned our raincoats and continued to observe Leoni and her male friend. It was difficult to look up into the forest canopy as the rain spluttered down on our faces. Leoni was undisturbed and continued to eat under the cover of the canopy.

In the late afternoon, the day turned dark and the rain refused to subside. Leoni moved to another tree, as if looking for a fitting place to build a nest. She finally settled in a position and started constructing. The male still lingered, not too far from Leoni. We kept watching the pair until Leoni had finished her nest and got into it alone, covering her body with leafy twigs as a blanket.

Meanwhile, the male orangutan made his own nest not far from Leoni. We were still unable to confirm his identity, as male orangutans experience facial changes when their cheek pads start to grow. This still gives us some insight, however, as it suggests that the male orangutan had gone unobserved for quite some time and may have been released prior to the development of his cheek pads!

After confirming there was no more movement in Leoni’s nest, we hiked back to camp in the rain and fading daylight. We used our headlamps to illuminate the path on our way back to camp, as we climbed up the steep ravine to get to the main trail. The ground was very slippery from the rain – it was exhausting, but exciting!

When we finally reached the main trail, it was only a 15-minute walk downhill to reach the camp, located in a valley. We were all glad to return to camp with an exciting story to tell and a mystery male to identify!

Keep exploring and enjoy your freedom, Leoni and mystery male!