BOSF: Release Candidate Profiles for the 1st Orangutan Release of 2021

February 22, 2021 — This week, the BOS Foundation in collaboration with the Central and East Kalimantan BKSDA Office released ten orangutans to release sites in Bukit Batikap Protection Forest and Kehje Sewen Forest. The ten orangutans were transported from the BOS Foundation Orangutan Rehabilitation Centers in Nyaru Menteng and Samboja Lestari. Here are their profiles.

Visit our Release Archive to read, watch and learn about previous releases by the BOS Foundation. 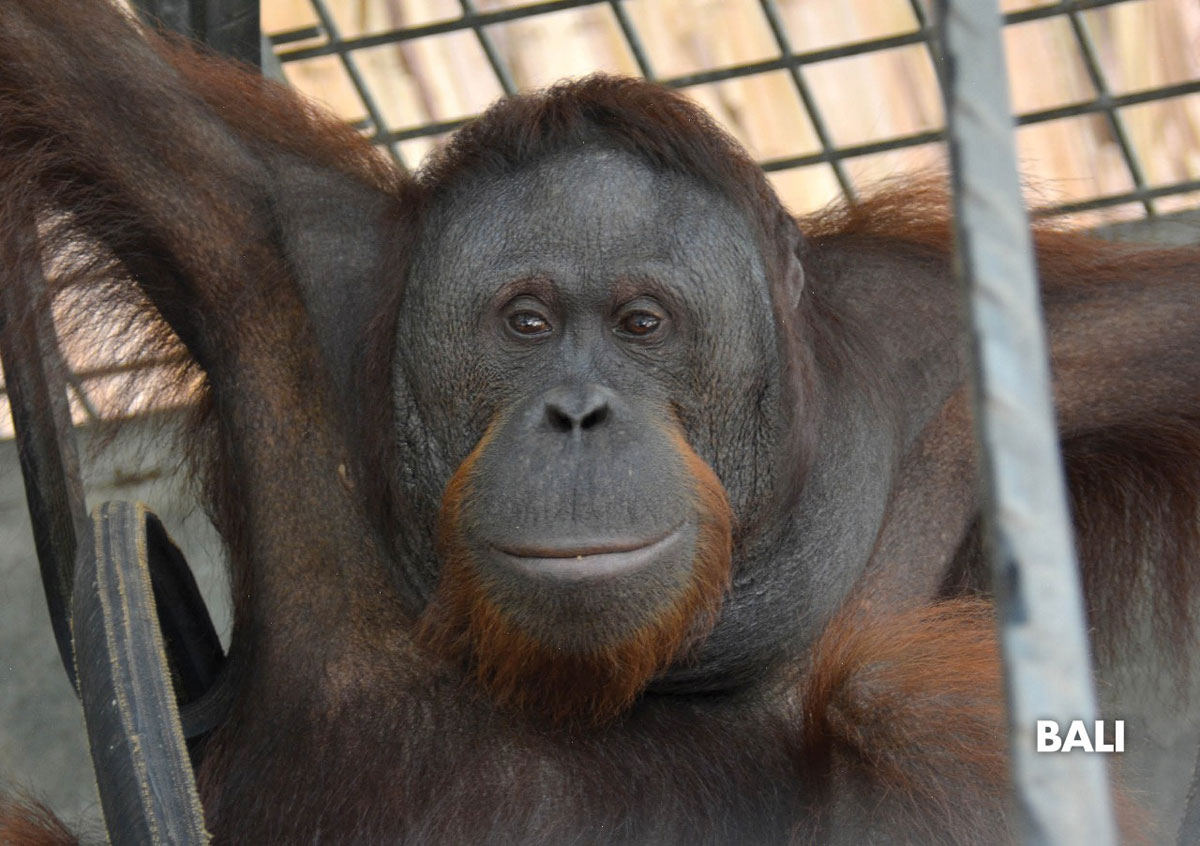 Bali was rescued from a plantation owned by local villagers in Buntut Bali Village, Katingan Regency, Central Kalimantan. He arrived at Nyaru Menteng on 16 January 2003, at the age of four months and weighed 2.8 kilograms. Like so many others, he arrived without a mother and in poor condition. Beneath his skin, there were lodged two rounds of air-rifle pellets and on his face and chest, his skin was starting to peel away. To make matters even worse, his right leg was broken. Bali required intensive and immediate care from the Nyaru Menteng medical team.

Following his quarantine and eventual recovery, Bali joined Forest School and worked hard as he progressed through each stage. He was finally selected to be moved to the Badak Besar Pre-release Island on 26 June 2019. Unfortunately, whilst on the island, Bali injured his finger – possibly the result of fighting with other orangutans – and his wound was so severe that he was taken to the clinic for treatment. On 16 January 2020, the medical team had to amputate his finger. But after Bali had recovered, he was sent back to Badak Besar Island.

Bali is now 18 years old and weighs 37 kilograms. He tends to avoid humans, but is easily distracted by new faces. Bali generally gets along with other orangutans, despite occasionally roaming the island alone. Bali possesses good skills and he is exceptionally adept at foraging, allowing him to successfully avoid competition with dominant orangutans. Soon, Bali will prove his ability as a true, wild orangutan in the Bukit Batikap Protection Forest. 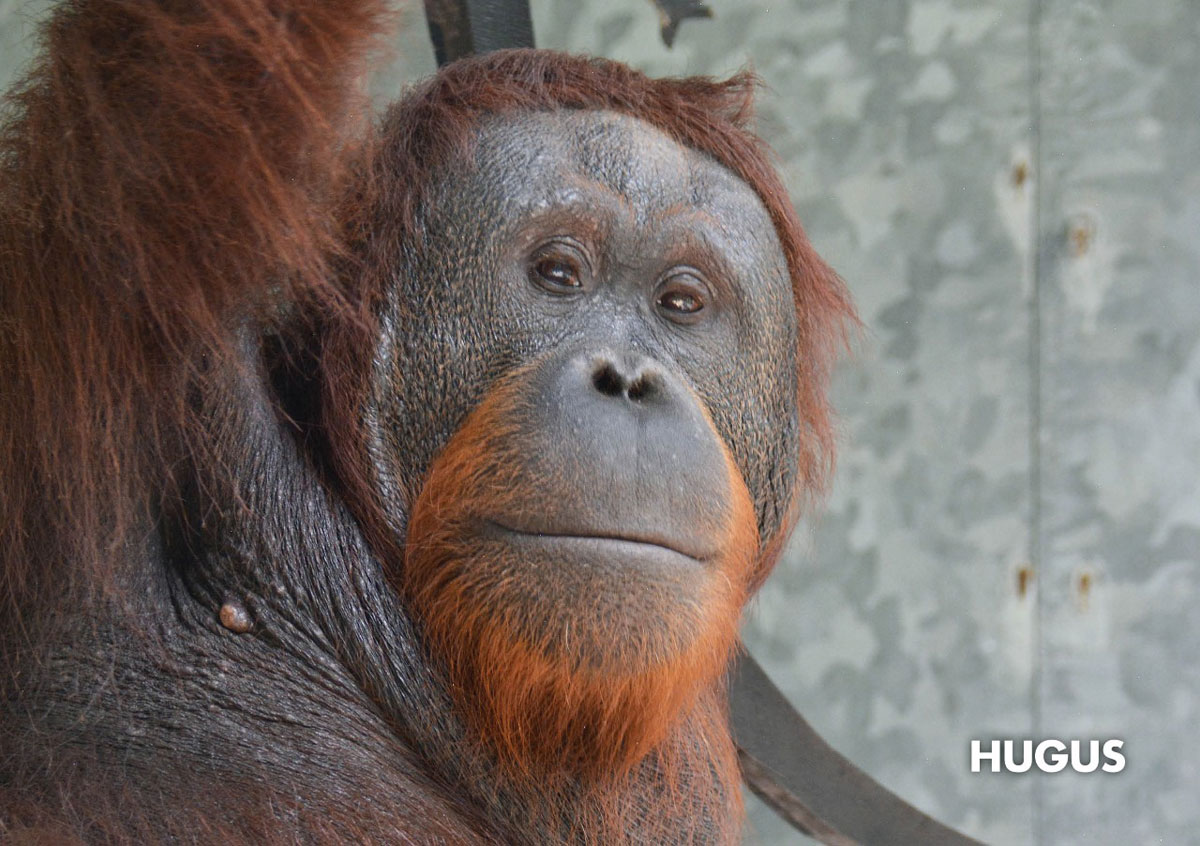 Hugus is a male orangutan who was rescued on 22 November 2007, after being confiscated from an employee of an oil palm plantation in Katingan Regency, Central Kalimantan. Upon rescue, Hugus was about 18 months old and weighed seven kilograms.

For three months, Hugus underwent quarantine before joining Forest School, where he progressed successfully through every stage of learning. After completing Forest School, Hugus entered the pre-release stage of rehabilitation on Badak Besar Island on 26 June 2019.

Hugus is currently 15 years old and weighs 45 kilograms. He firmly dislikes the presence of humans and will display threatening gestures to show his displeasure. Hugus tends to avoid the more dominant orangutans, preferring instead to practice his excellent skills alone. With his sound skillset, Hugus is ready to live wild and free in the Bukit Batikap Protection Forest. 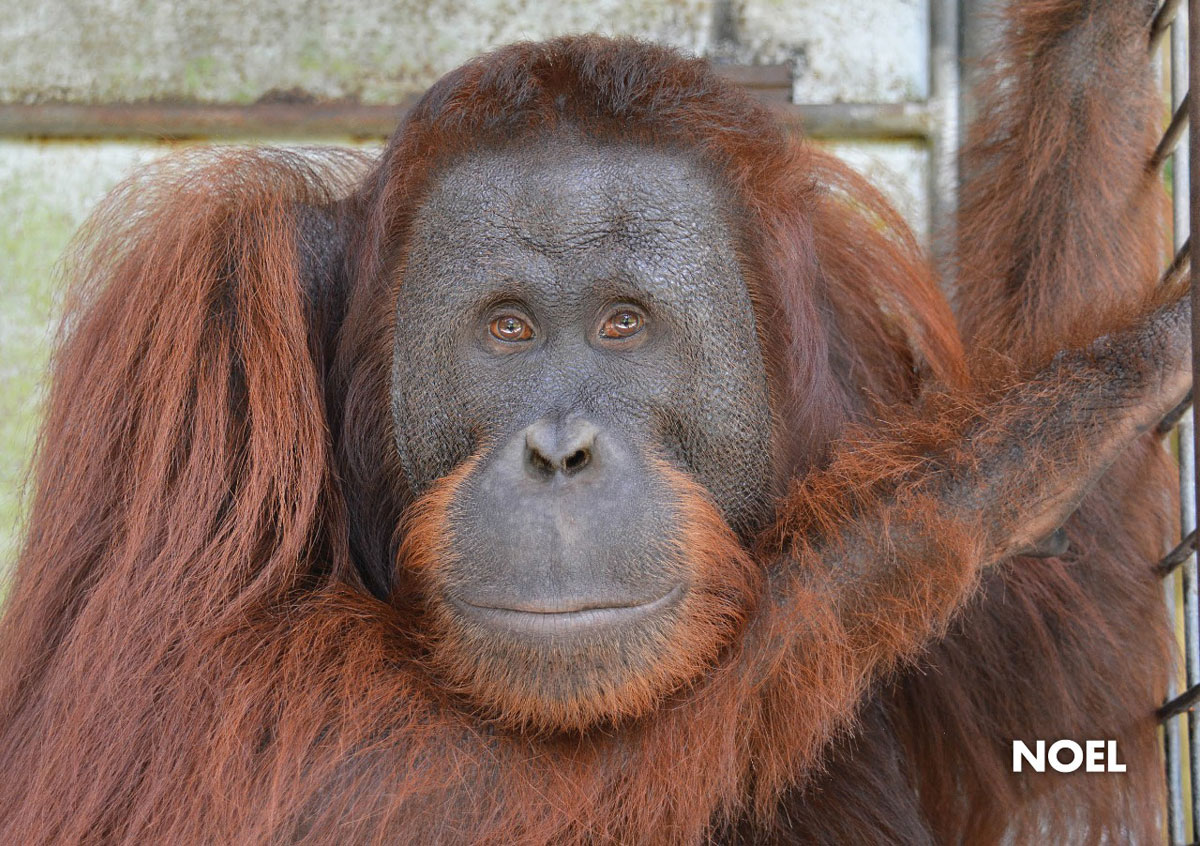 Noel is a male orangutan who was rescued from a villager in Tumbang Jutuh Village, Gunung Mas Regency, Central Kalimantan, on 27 December 2007. At the time of his rescue, Noel was 12 months old and had a crooked, right index finger due to a past injury.

At Nyaru Menteng, Noel underwent three months of quarantine prior to joining Forest School, where he passed through each stage and developed into an independent orangutan. On 26 June 2019, Noel entered the pre-release stage of rehabilitation on Badak Besar Island. Noel managed to escape from the island at the end of June 2020, by crossing the receding river. A week later, he was successfully retrieved from a nearby farm.

Noel is currently 15 years old and weighs 40 kilograms. He is easily distracted by human presence, especially new faces. He is very good at exploring, socializing with other orangutans, and foraging. In a matter of days, Noel will prove his ability to live as a true, wild orangutan when he is released in the Bukit Batikap Protection Forest. 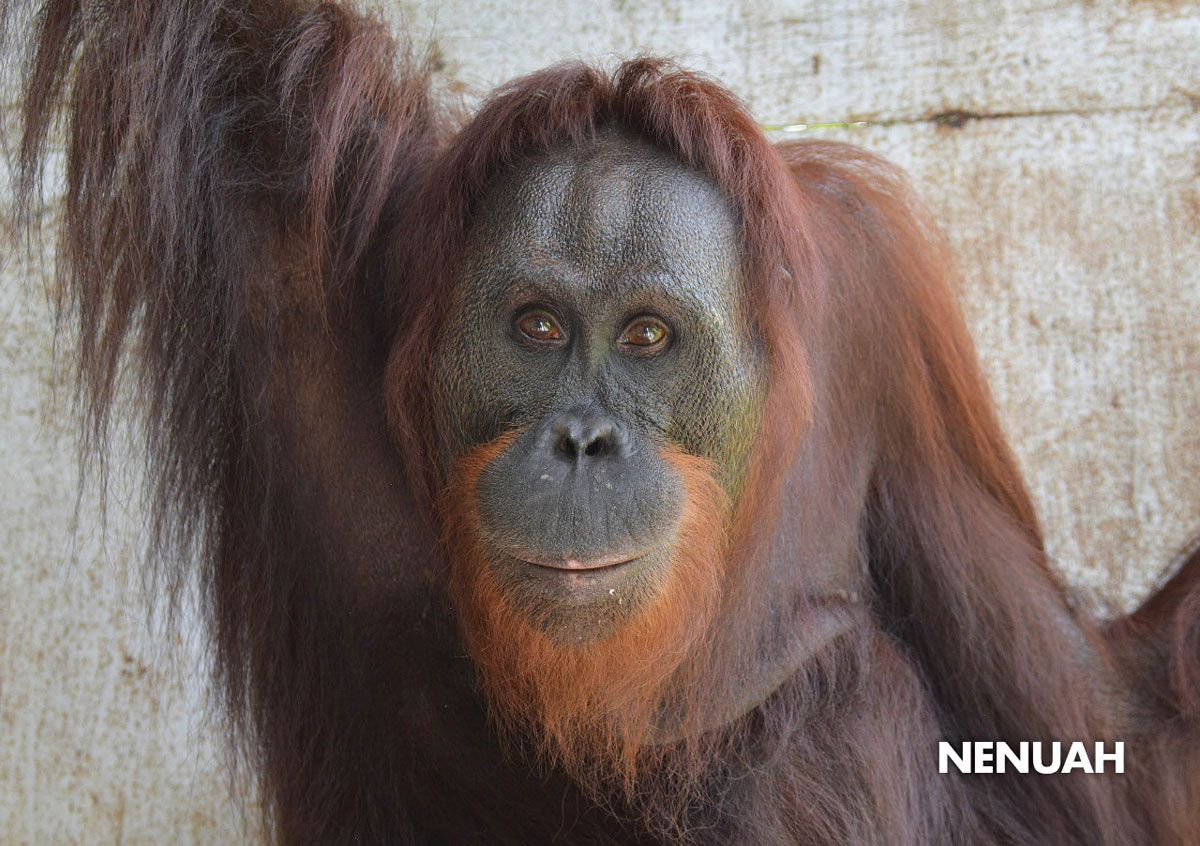 Nenuah, a female orangutan who was repatriated from Thailand and arrived at Nyaru Menteng on 22 November 2006. Upon arrival, she was 4.5 years old, weighed 17 kilograms, and was in relatively good health.

Nenuah eventually got the opportunity to live and learn to a pre-release island on 25 June 2019 when she was moved to Badak Besar Island. There, she developed into an orangutan with good survival and socialization skills. After one year on the pre-release island, Nenuah was declared ready for release.

Nenuah is now 19 years old and weighs 37 kilograms. She tends to be aggressive towards humans, but likes to spend time in the company of orangutans. Charming Nenuah, a highly curious individual who loves to explore, is now ready to return to the wild. 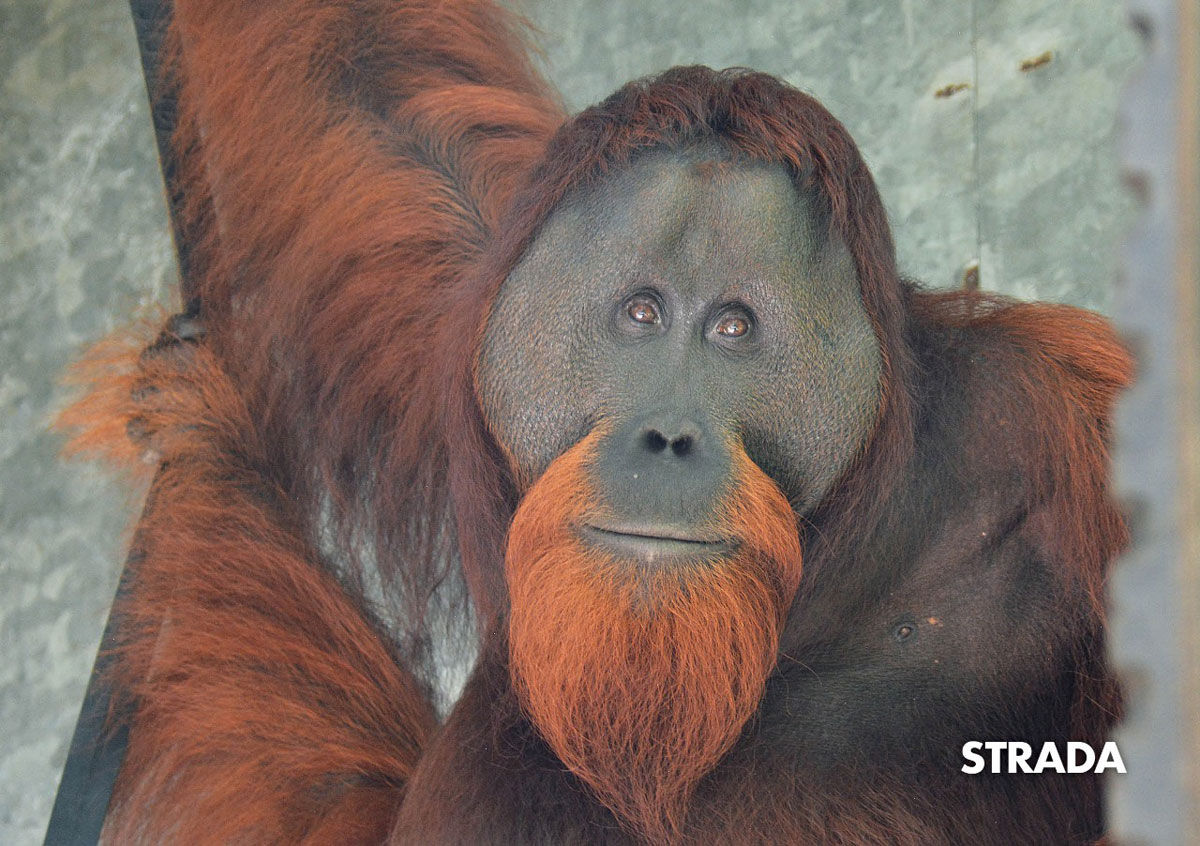 Strada is a male orangutan who was rescued from Lamunti Village, Kapuas District, Central Kalimantan, on 23 April 2005. Upon rescue, he was 3.5 years old and weighed nine kilograms. As he still exhibited wild behaviors, Strada started his rehabilitation process at the Nyaru Menteng 2 complex instead of Forest School.

Unfortunately, tragedy struck only a few years after his arrival when an infrastructure issue allowed for Strada to break free of his enclosure. The team was unable to locate him.

Many years later, in early 2020, we spotted a wild, adult male orangutan hanging around NM2 on a number of occasions. In March 2020, the decision was made to rescue this individual who was at risk for human-orangutan conflict. Our team then discovered that he had a chip implanted that identified him as Strada, the male who went missing more than 11 years earlier.

Strada is now 19 years old and weighs 53 kilograms. From his clear ability to survive in the wild over the years he went missing, we have no doubt that Strada will thrive in the Bukit Batikap Protection Forest. 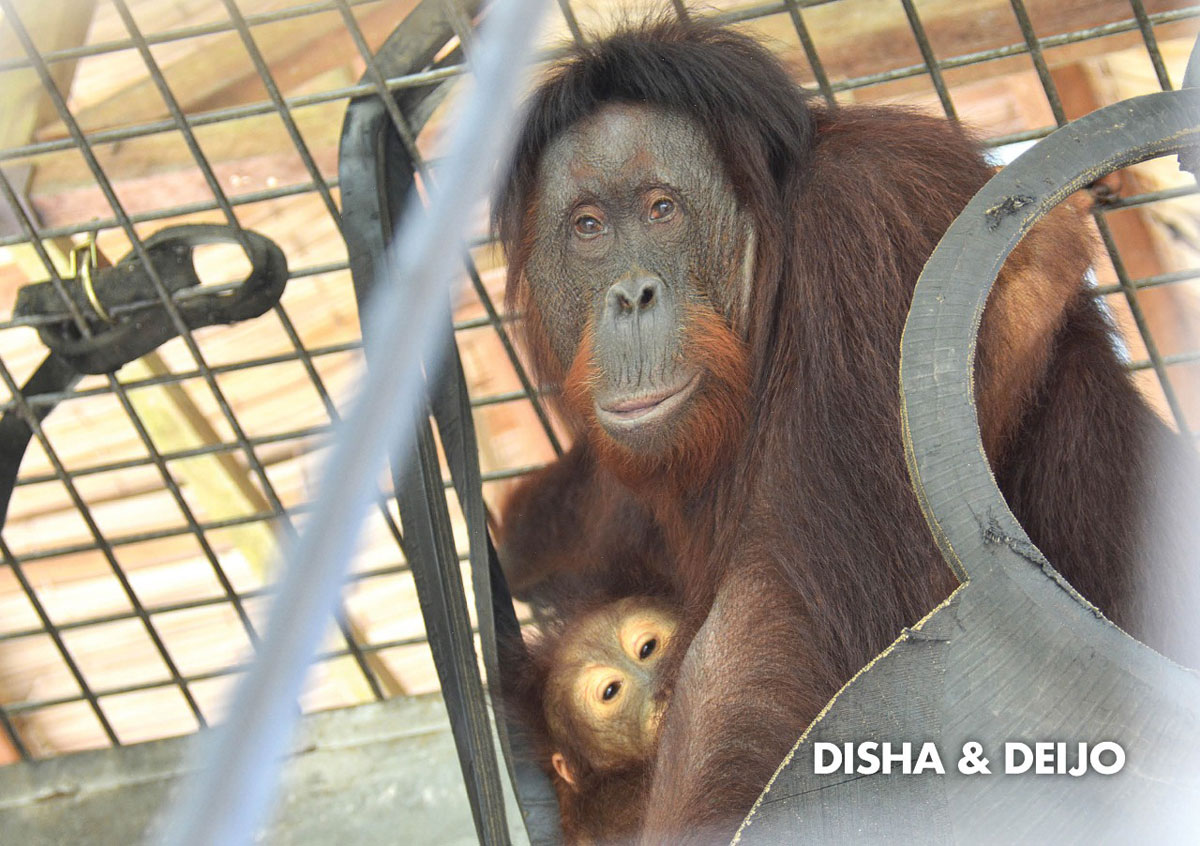 Mother-child pair Disha and Deijo are wild orangutans that were frequently spotted wandering around the Forest School Nursery area. Their occasional appearance would frighten the young orangutans in the group. Even more critically, their presence on the outskirts of heavily degraded, human settlement put them at high risk for conflict with humans, so the decision was made to rescue them on 13 March 2020.

We are certain that Disha and Deijo will live safely and comfortably in their new home in the Bukit Batikap Protection Forest. 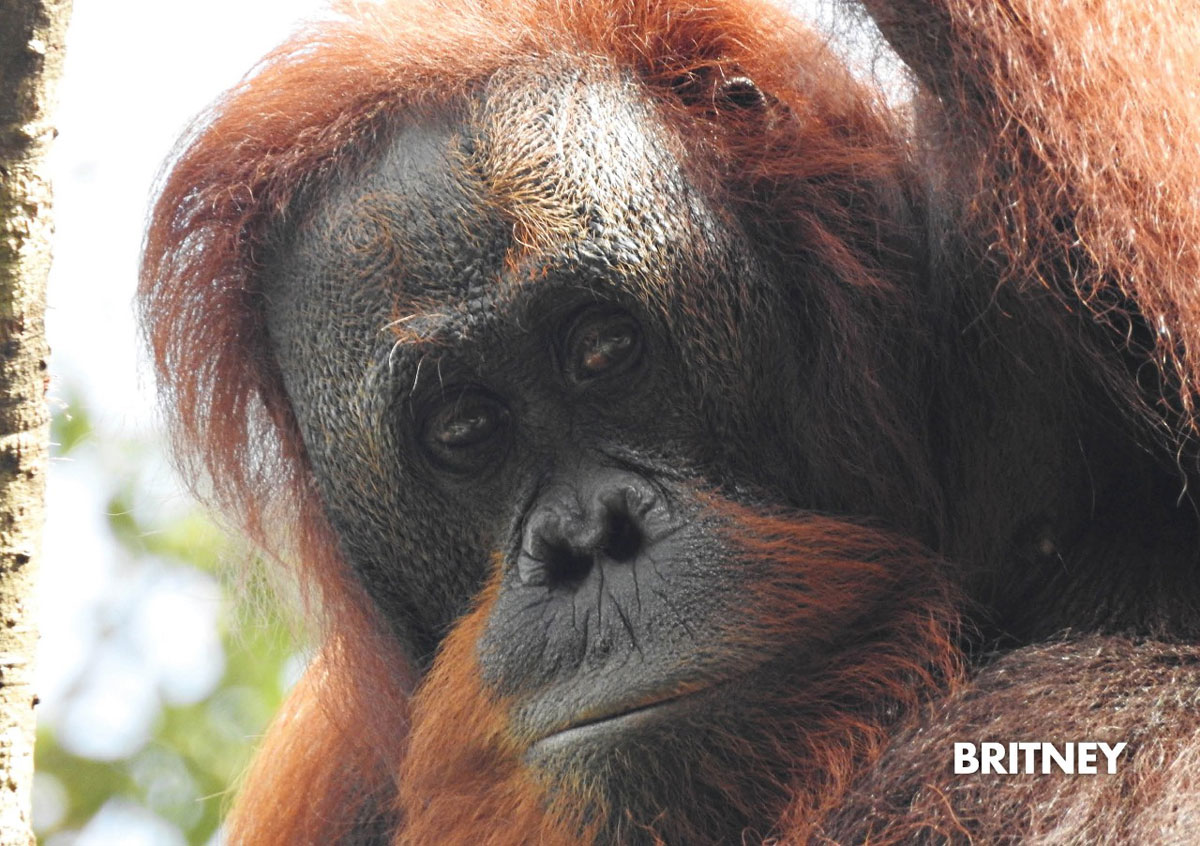 Britney is a female orangutan who was rescued from captivity in Bali on 16 June 2000, at the age of seven years. From the day she arrived at Samboja Lestari, Britney was housed inside a socialisation complex because she was physically large for her age and extremely aggressive towards technicians.

To this day, Britney is a stocky orangutan with an indifferent nature, and is extremely difficult to handle. She will completely ignore technicians when they try to get her attention, unless there is a reward involved.

In 2019, Britney was given the opportunity to live on Island #7 and experience the pre-release stage of rehabilitation. During her time on the island, Britney further developed her foraging and nest-building skills and proved she had what it takes to survive independent of humans.

Britney is now 28 years old and weighs 40 kg. This well-built orangutan is now ready to return to her natural home, the Kehje Sewen Forest. 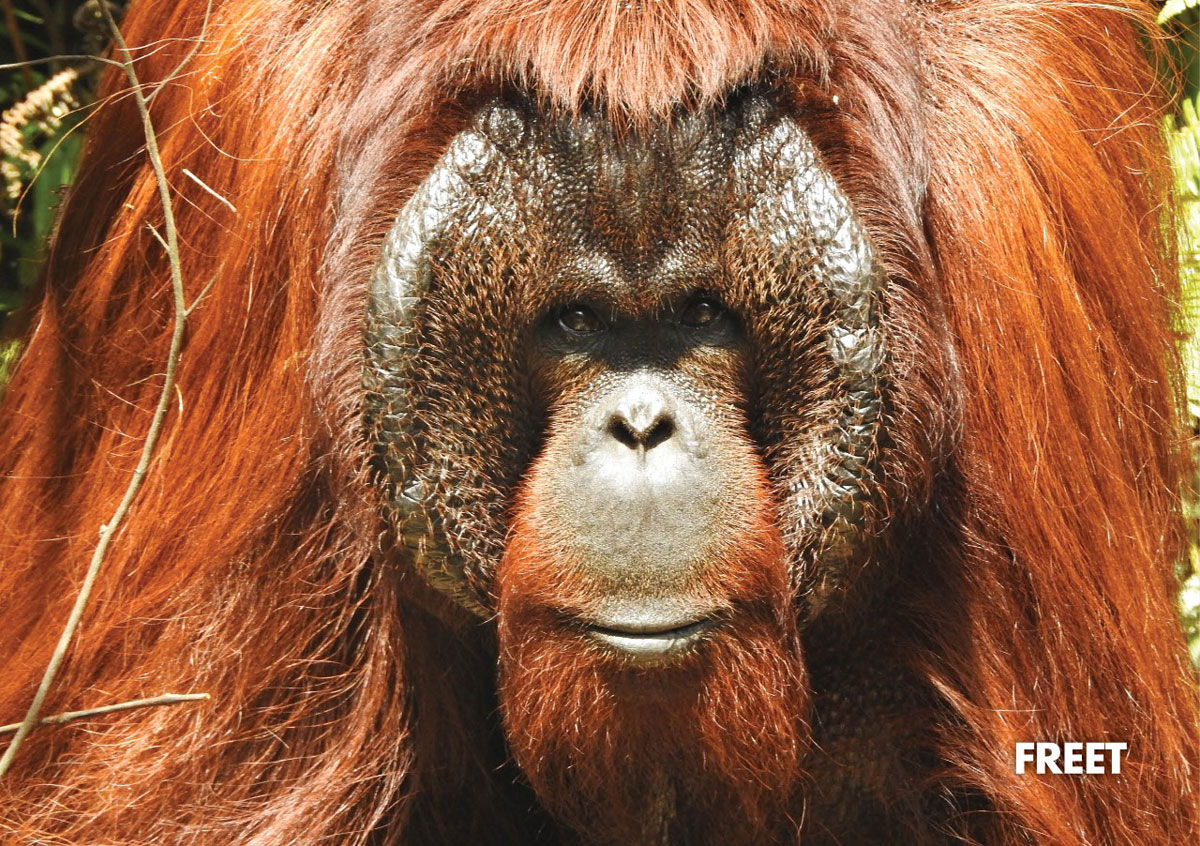 Freet was rescued on 4 August 1998, from a local villager in Muara Wahau who had been keeping him captive. He was four years old at the time and still displaying wild behaviours.

Upon his arrival at Samboja Lestari, Freet was diagnosed with Hepatitis B, thus had to be placed in a quarantine complex specially designed for orangutans with this health condition. Even within the confines of the complex, how, Freet came to be known as a responsive individual, especially with the technicians with who he was familiar.

Once we learned that Freet had a non-virulent strain of orangutan Hepatitis B, he was finally able to enter the pre-release stage of rehabilitation on Island #7. On the island, he managed to further develop his foraging and nest-building skills.

Fully-flanged Freet is now 27 years old and weighs 73 kg. He has been assessed as ready to live in the wild and will soon get the chance to prove his abilities in the Kehje Sewen Forest. 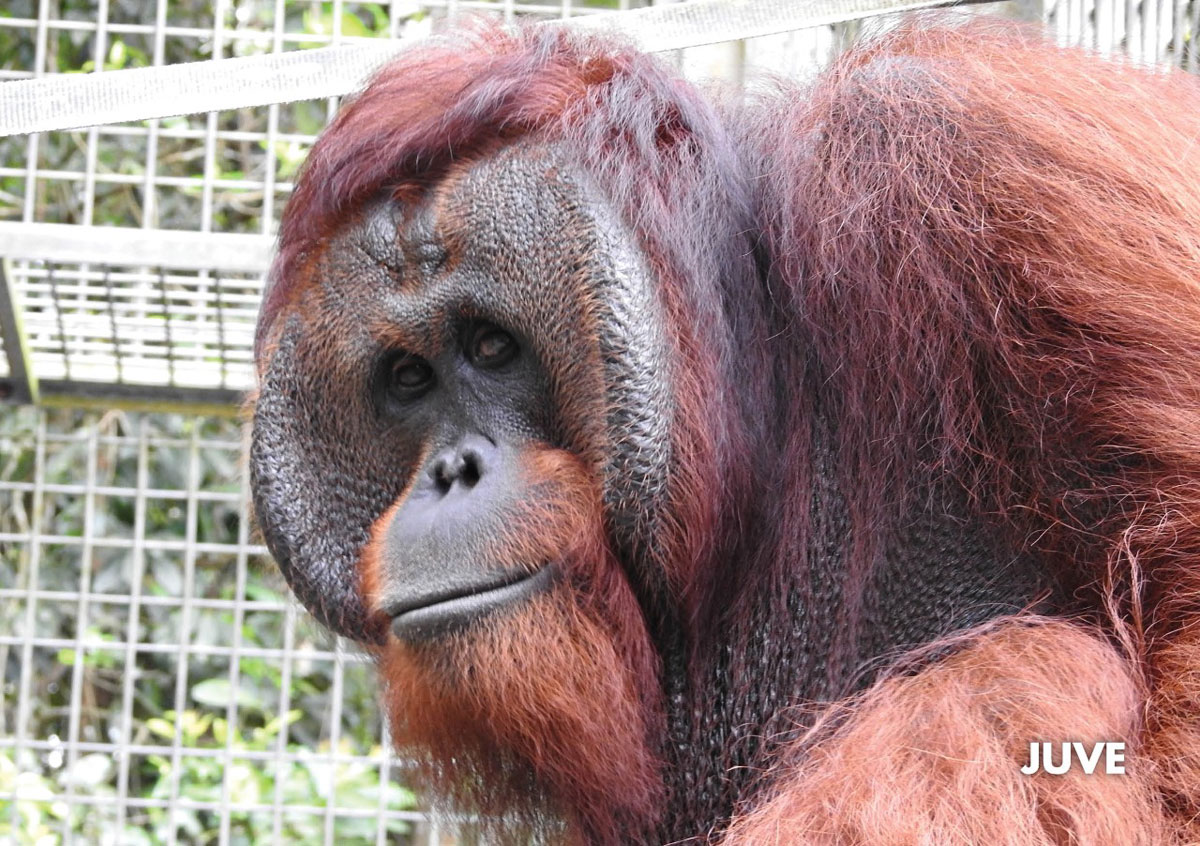 Juve was confiscated in Jakarta and arrived at Samboja Lestari on 18 March 2001, at the age of five years.

Juve is known as an independent and aloof individual, but will become aggressive if technicians get too close to him. Juve even shows signs of irritation when he is called by name.

In 2018, Juve got the opportunity to join the pre-release stage of rehabilitation on Island #7, where he managed to develop sound foraging and nest-building skills.

Now 25 years old and weighing 76 kg, Juve is ready to live free and independently in the wilderness of the Kehje Sewen Forest.