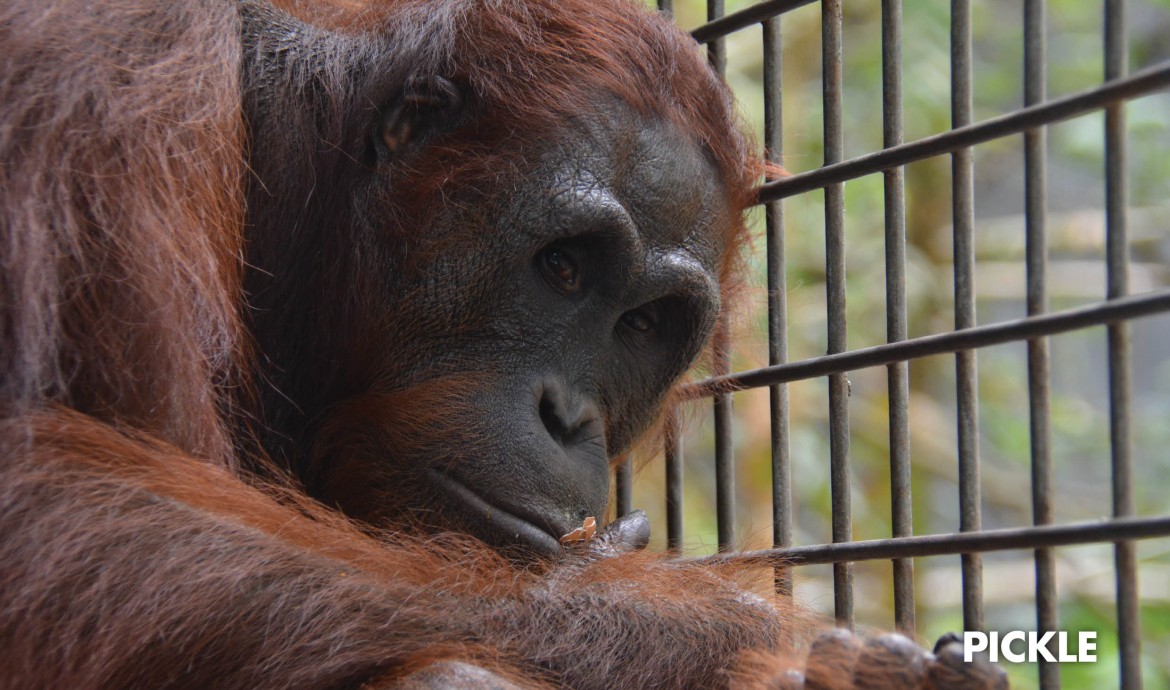 Pickle was rescued from Pangkalan Bun in West Kotawaringin Regency, Central Kalimantan. He arrived at the Nyaru Menteng Orangutan Rehabilitation Centre on September 29, 2007, when he was just five months old. He weighed only 2.2 kilograms at the time and was alone, without his mother.

After completing the quarantine period, Pickle joined Forest School. Several years later, he graduated with flying colours and was finally transferred to Badak Besar Pre-Release Island 30 March 30, 2019. Thanks to his well-honed survival skills and explorative nature, this independent orangutan was able to complete all stages of rehabilitation and prove himself ready to return to the forest.

Pickle is now 14 years old and weighs 40 kilograms. After 13 years of rehabilitation at Nyaru Menteng, Pickle is more than ready to embark on a new adventure in the forests of the Bukit Baka Bukit Raya National Park in Central Kalimantan. 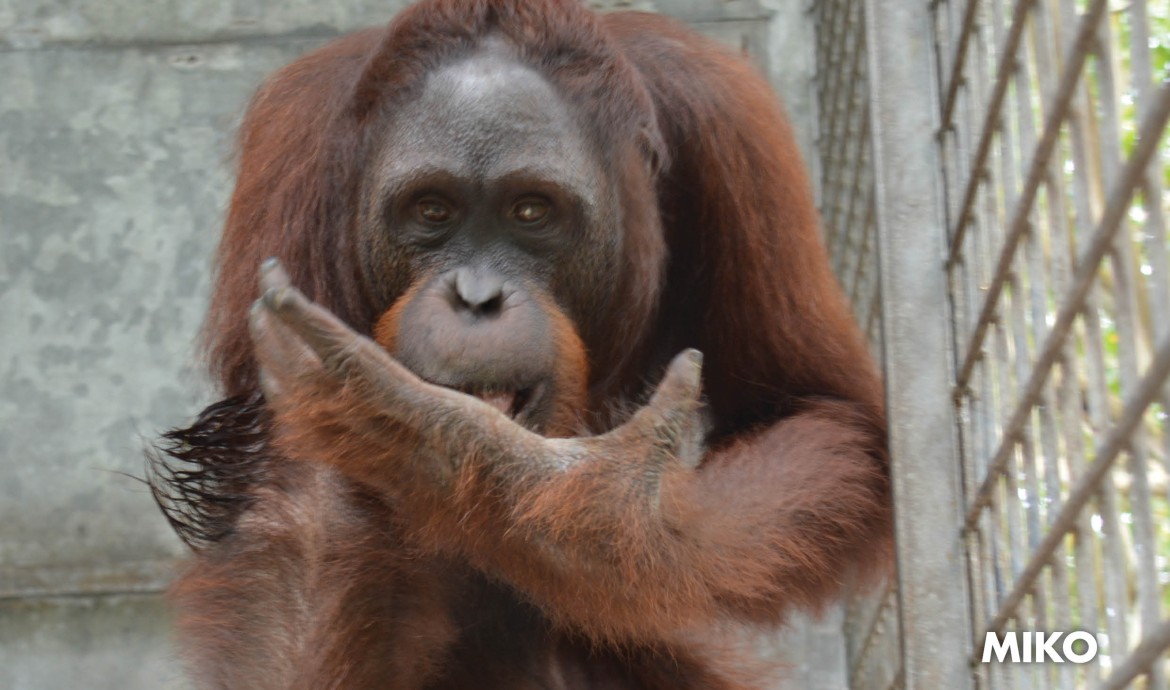 Miko was rescued in Kereng Bangkirai Village in Sabangau District, Palangka Raya City, Central Kalimantan, on February 10, 2010. At the time of his rescue, Miko was only three months old and weighed 2.5 kilograms.

Following a period of quarantine, Miko attended Forest School to hone his survival skills. He passed all levels of Forest School and proceeded to the pre-release stage of rehabilitation on Badak Besar Island on November 14, 2019. On the island, Miko was known as a highly curious individual. While not a dominant figure, he was still capable of defending himself when needed.

Mikko is now 11 years old and weighs 30.7 kilograms. After undergoing a 10-year rehabilitation process at Nyaru Menteng, he is now ready to explore the forests of the Bukit Baka Bukit Raya National Park as a true, wild orangutan. 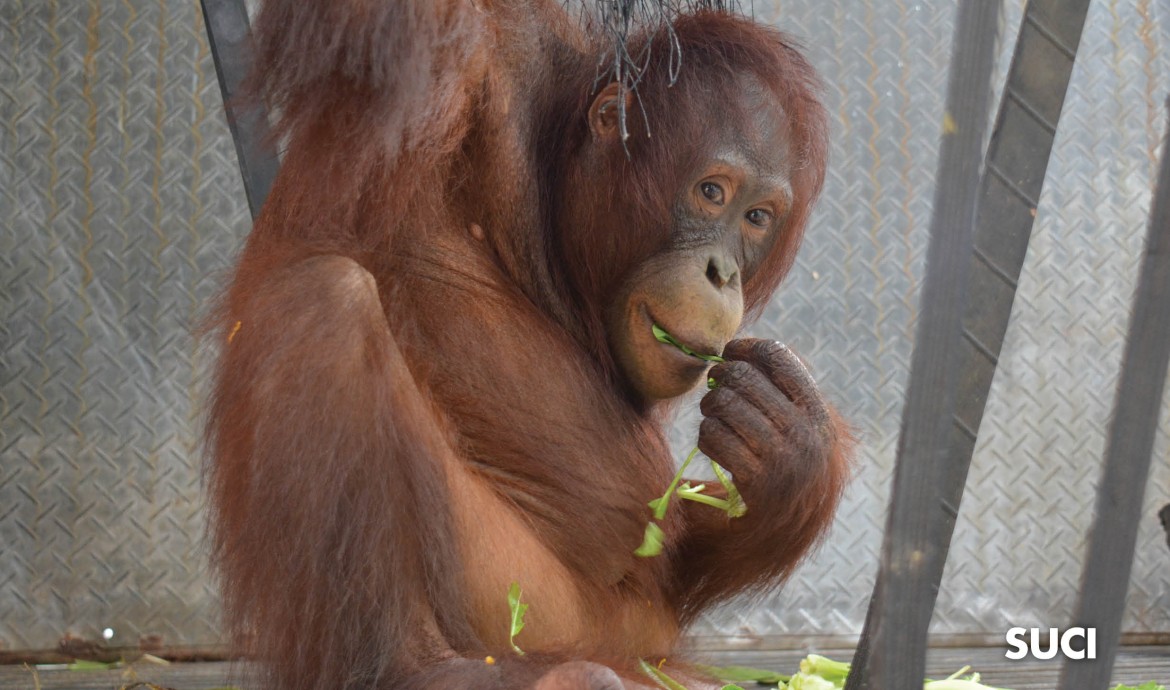 Suci was rescued in Kasongan, Katingan Regency, Central Kalimantan, on August 8, 2016. At the time of her rescue, she was only 12 months old and weighed 5.5 kilograms.

After passing quarantine, Suci began her rehabilitation process in Forest School. After only a few years, she had completed all levels and was transferred to Badak Besar Island on November 7, 2019. During her time on the pre-release island, Suci became known as a lone explorer. Observations confirmed that Suci had mastered all the natural skills required to survive independently in the wild.

Suci is now six years old and weighs 26.3 kilograms. After undergoing a 5-year rehabilitation process, she is ready to explore the forests of the Bukit Baka Bukit Raya National Park alongside her peers. 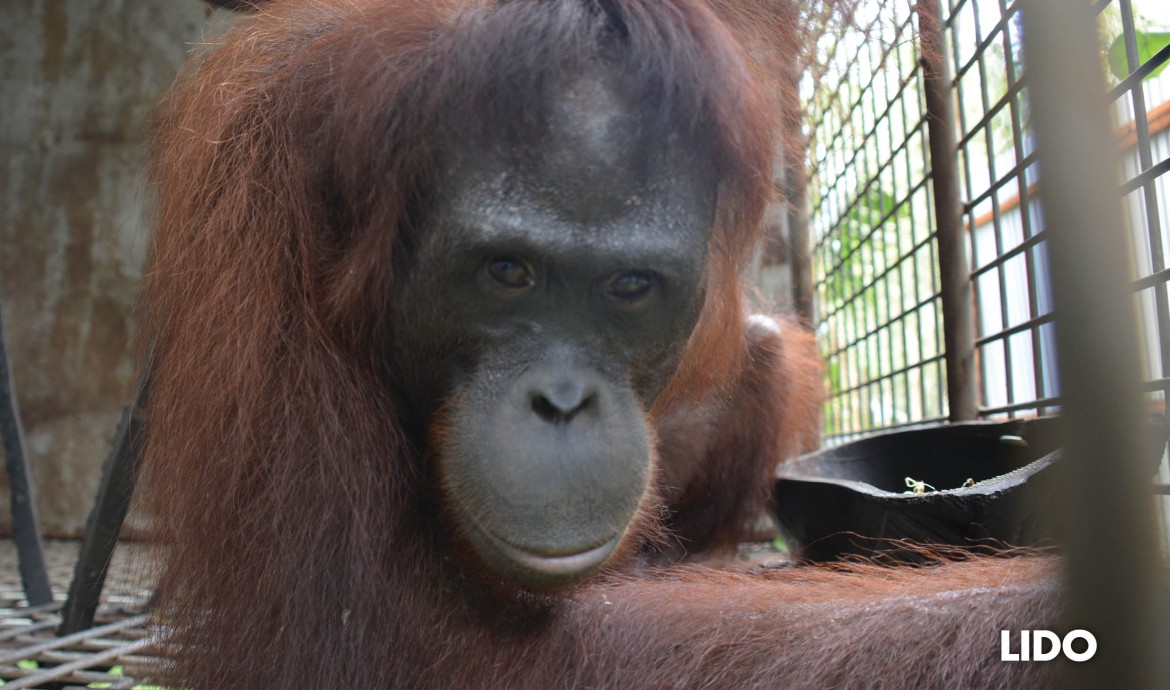 Lido was rescued from a palm-oil plantation in East Kotawaringin Regency, Central Kalimantan, on 10 January, 2007, through the joint efforts of the Central Kalimantan BKSDA’s wildlife rescue team and the BOS Foundation. She was found in poor physical condition, without her mother. At the time, she was only a month old and weighed just 1.3 kilograms.

After completing all stages of Forest School at Nyaru Menteng, Lido proceeded to the pre-release stage of rehabilitation on Badak Besar Island on November 4, 2016. She was very vigilant on the island and cared little for human presence.

Lido is now 15 years old and weighs 33.3 kilograms. After undergoing the rehabilitation process for nearly 15 years, she is ready to live wild and free in the Bukit Baka Bukit Raya National Park. 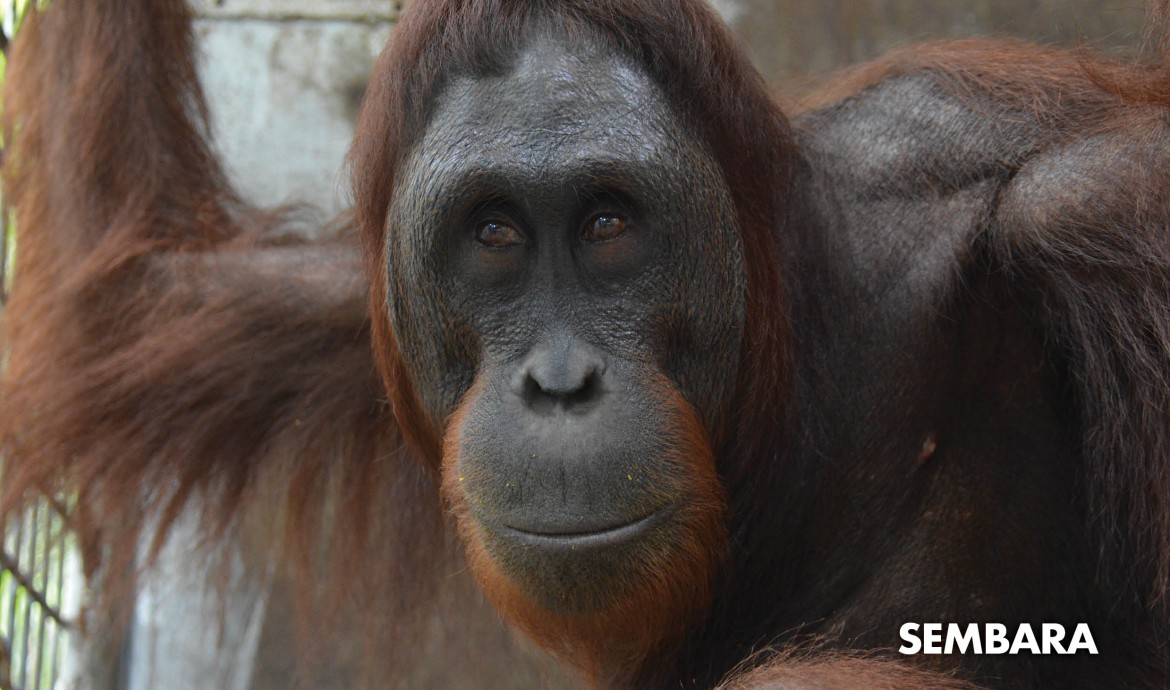 Sembara was rescued, by a joint effort between the Central Kalimantan BKSDA’s wildlife rescue team and the BOS Foundation, from a local resident in Palangka Raya, Central Kalimantan, on August 10, 2011. He arrived at Nyaru Menteng when he was 2.5 years old, weighing 3 kilograms.

After passing quarantine, Sembara attended Forest School and finished all levels before being transferred to Salat Island for the pre-release stage of rehabilitation, on November 7, 2019. On the island, it was observed that he was easily disturbed by human presence and became skilled at responding to his surroundings.

Sembara is now 13 years old and weighs 36.6 kilograms. After a decade of rehabilitation, he will soon be enjoying true freedom in the Bukit Baka Bukit Raya National Park. 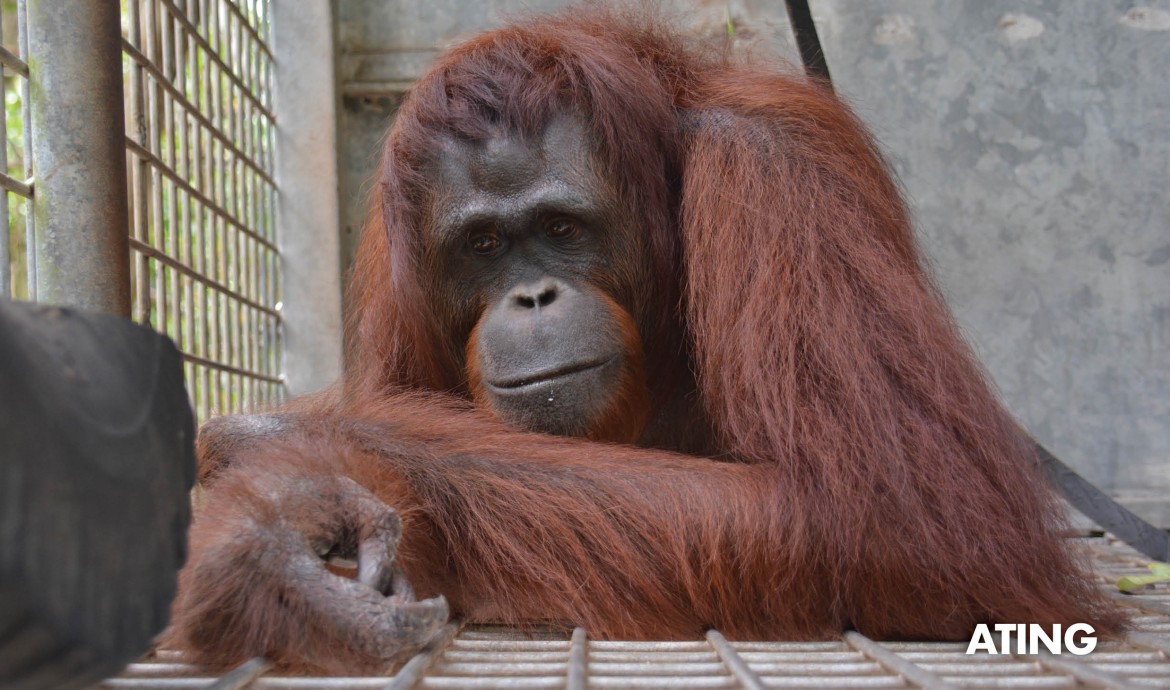 Prior to her rescue, Ating was under the care of an oil palm plantation worker for about a week in East Kotawaringin Regency, Central Kalimantan. The worker claimed that the plantation had bought the baby orangutan from a poacher. Ating finally arrived at Nyaru Menteng on November 16, 2006, when she was two years old and weighed 3.5 kilograms.

After completing quarantine, Ating joined Forest School and on April 5, 2017, she took a huge step and started the pre-release stage of rehabilitation on Badak Besar Island. Ating ignored human presence on the island and tended to keep her distance from other orangutans, opting to explore the forest on her own.

Ating is now 17 years old and weighs 47.6 kilograms. After 15 long years of rehabilitation, she will soon prove that she is capable of surviving as a true, wild orangutan in the Bukit Baka Bukit Raya National Park. 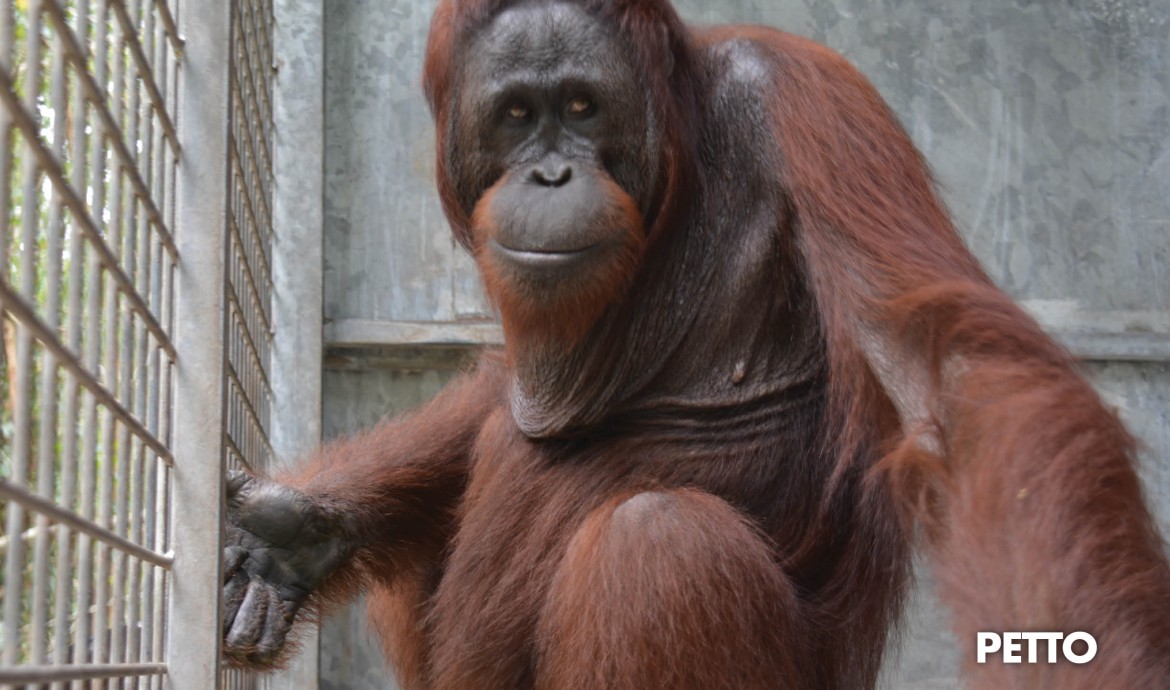 Petto was rescued from Henda Village in Pulang Pisau Regency, Central Kalimantan, and arrived at Nyaru Menteng on March 29, 2008. He was 2.5 years old at the time and weighed only 2.5 kilograms. He arrived at Nyaru Menteng in poor physical condition, with a cut stretching from his abdomen to his lower chest and another one on his upper left arm that required stitches and a period of intensive care.

After recovering from his wounds and passing quarantine, Petto joined Forest School to learn the necessary survival skills. On November 23, 2017, Petto was finally transferred to Badak Besar Island to undergo the pre-release stage of rehabilitation. On the island, Petto was not a particularly aggressive orangutan and usually ignored human presence. He became an excellent explorer and easy made friends with other orangutans. 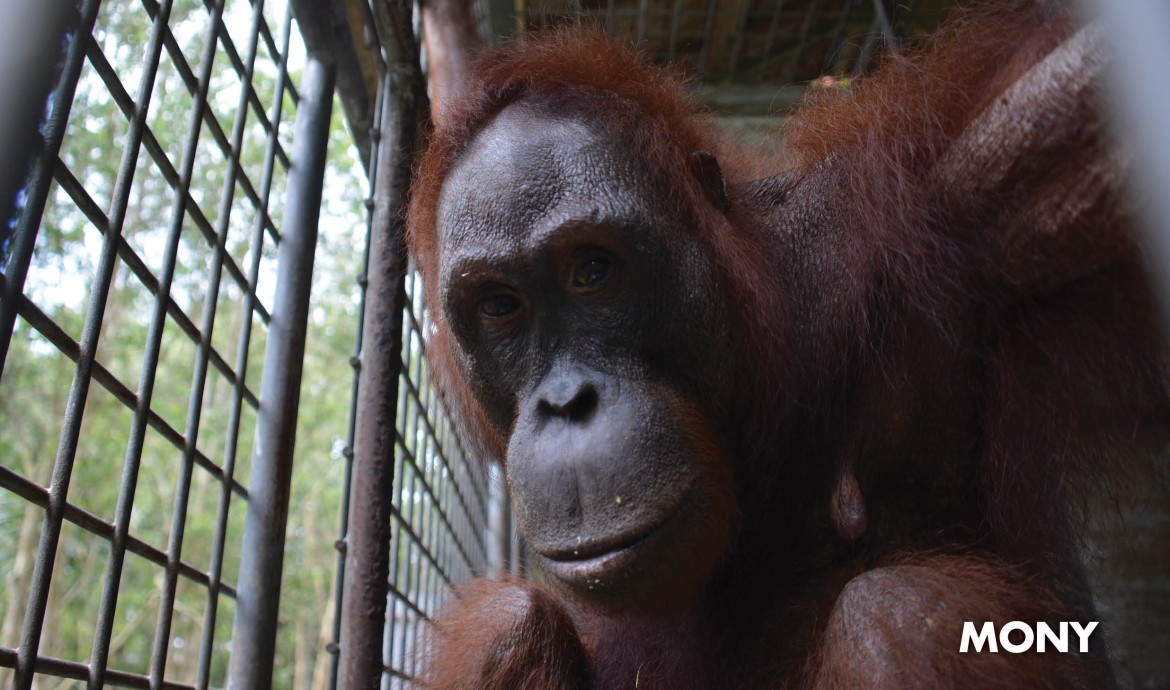 Mony was rescued in the city of Palangka Raya, Central Kalimantan and arrived at Nyaru Menteng on December 23, 2008, when she was 18 months old.

After completing Forest School, she was transferred to Badak Besar Island on March 30, 2019. There, Mony showed technicians that she was incredibly observant of her surroundings and capable of defending herself when needed. On the pre-release island, Mony gave birth to a baby male orangutan on July 31, 2021. Tragically, her first attempt at motherhood was not successful as a few months later, her son went missing.

Mony is now 15 years old and weighs 28 kilograms. After going through a 14-year rehabilitation process, Mony is finally ready to explore independently her true home in the Bukit Baka Bukit Raya National Park.