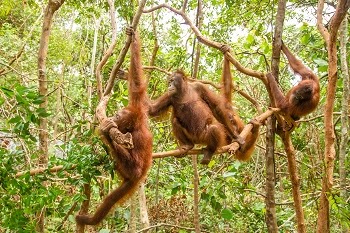 The past month was busy as usual at the Ketapang Transit Center and the new IAR facility at Sungai Awan. The excitement began when Prima, one of the adolescent females, was moved to the forest enclosure. Here she was reunited with her former cagemate, Helen, and a couple of other old friends. Helen and Prima are the next candidates for release, but their behavior must be evaluated first in order to ensure that they'll be able to survive in the wild. In the enclosure, the girls are observed from the time they wake up until they go to sleep for the night, which makes for a long day! While some food is provided for them, they are free to search the trees for fruit and leaves. Data is collected to determine how they are spending their time, what kind of forest foods they are finding and where, as well as how efficiently they are making their nests. 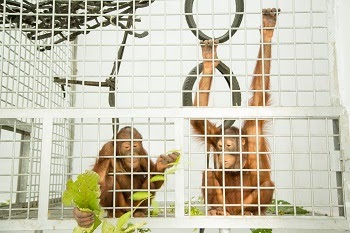 Aside from the group of females that moved earlier in July (which you can read about here), the team has also started to transfer some of the older males to the new center. There is a load of coordination and preparation that goes into any move, but it is worth it when all is accomplished safely and efficiently.  Much like their female counterparts, John, Patrick, and Jimo had smooth anesthesias and were very curious to see the bustling streets of Ketapang fly by during their short journey. They are now busy exploring and adjusting to their new temporary digs in the more tranquil setting of Sungai Awan. They will move into larger, outdoor enclosures when construction is finished. 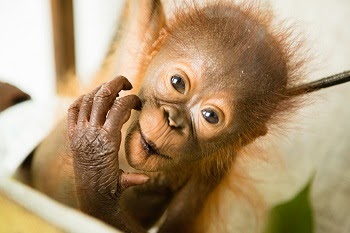 July has also brought a tiny new baby named Marie. This little angel literally arrived on the doorstep one evening after being surrendered to IAR by her temporary owner. Marie only weighs about 2 kilograms, but she is likely around 7 to 9 months old. She is thin and very small for her age-- potentially due to malnourishment. She has been showing some promising signs of wild behavior, as she climbs well on her hammock, likes to play with leaves, and loves to eat the fruit we pick for her. The baby was 'found' by a fisherman who was walking in the forest and heard crying. He says the little orangutan was there alone (which would be highly unusual), so he took her back to his home when her mother did not come for her. The man kept her for a couple of weeks, but decided to hand her over to IAR because he could not afford to feed her any longer. She was bathed often, had been eating rice and bananas, and was given milk-- sometimes the strawberry-flavored variety. We may never know the fate of her mother or Marie’s true story, but we are glad she is now under the expert care of the staff of IAR.