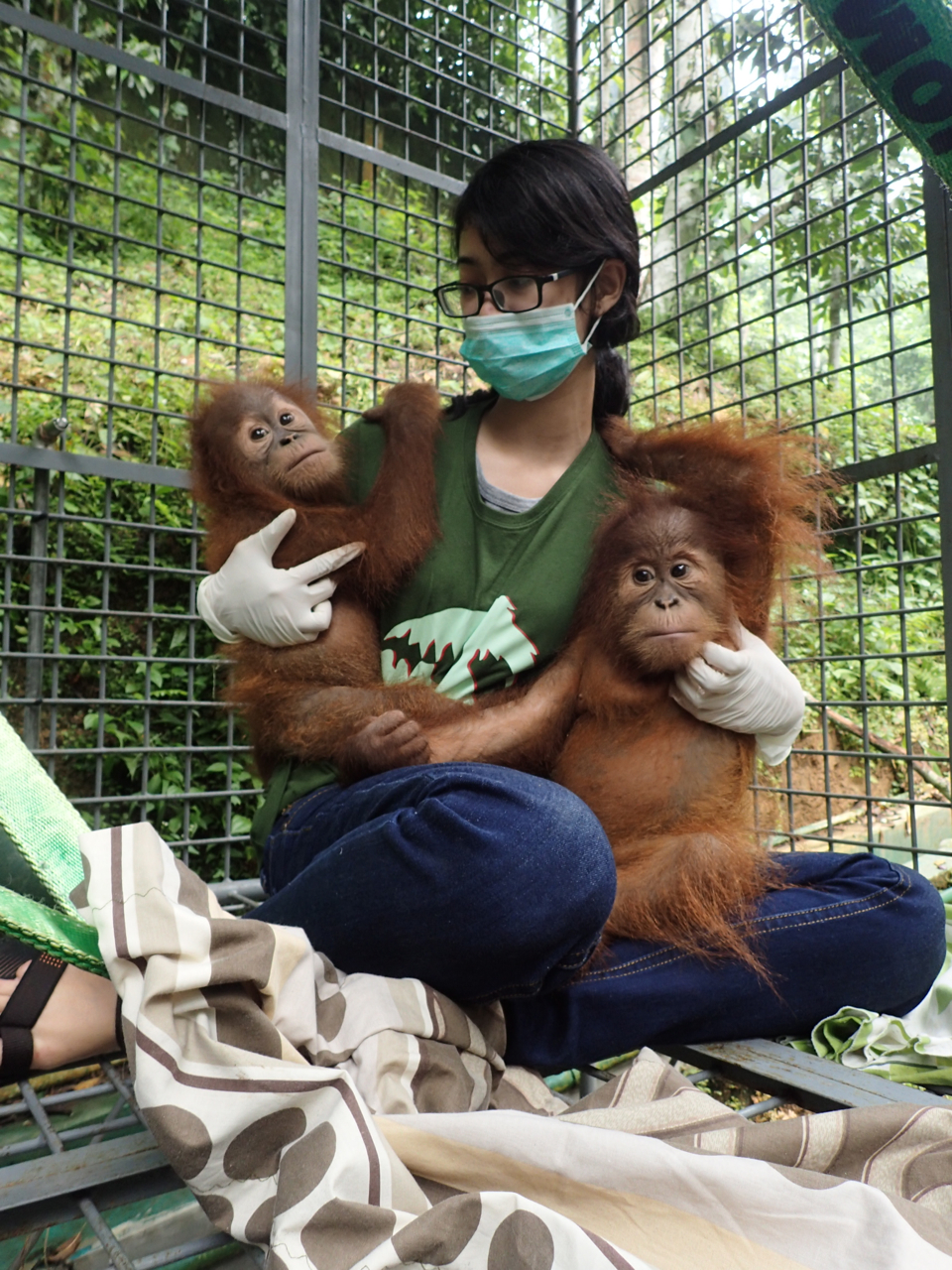 Medan, North Sumatra, Indonesia; 20th October 2015 : Two young infant Sumatran orangutans illegally smuggled into Malaysia, today returned to Sumatra to begin the process that will eventually see them return to a life in the wild, contributing to the long term survival of this Critically Endangered species.

The two infants, a male and female, aged just around 1 year old and named Citrawan and Bobina respectively by the Malaysian Wildlife and National Parks Department (Perhilitan), were confiscated on July 24th in Bukit Tinggi, Klang, Malaysia. Four men, comprising two locals and two Indonesians, believed to be members of a wildlife trafficking syndicate, were arrested by Perhilitan enforcement officers in the 8.30 pm operation. They had been smuggled illegally into the country via Medan in Sumatra. The protected animals were meant to be sold in Malaysia by the suspects for RM 20,000 each. The case is being investigated under the Wildlife Conservation Act.

Sumatran orangutans (Pongo abelii) are a distinct species from their relative on the neighbouring island of Borneo (Pongo pygmaeus). Whilst Bornean orangutans are listed as ‘Endangered’ by the World Conservation Union (IUCN) on their Red List of Threatened Species, the Sumatran orangutan is considered the more immediately in danger of extinction, with only around 6,600 or so left in the wild today, and is therefore classified as ‘Critically Endangered’.

Today the species’ major stronghold is in the Leuser Ecosystem, straddling the border of Aceh and North Sumatra provinces in the north of the island of Sumatra. The most serious threats to their survival in the wild include destruction of their habitat, primary lowland rainforests and peat swamp forests, which is most often due to conversion to monoculture palm oil plantations, and fragmentation of their habitat by road construction, which itself leads to more encroachment and conversion and also opens access to wildlife poachers.

Infant orangutans still regularly end up as illegal pets, a phenomenon that is normally a direct result of the loss of their habitat and the killing of their mothers.

Within Indonesia it is illegal to capture, kill, trade or keep an orangutan under National Law No. 5 / 1990, with potential sentences of up to 5 years and fines of IDR 100 million. The species is also listed on Appendix 1 of the Convention on International Trade in Endangered Species (CITES), under which animals smuggled out of their natural range country and confiscated should whenever possible be repatriated and returned to the wild.

Dr Ian Singleton of the Sumatran Orangutan Conservation Programme (SOCP) explained, “We are delighted to get these two little orangutans back to Sumatra, and that the smugglers were apprehended in this case and are being prosecuted. There have been far too few legal prosecutions of orangutan keepers and traders in the past, though we are seeing signs of this improving within Indonesia with two recent prosecutions in Sumatra in 2012 and 2015, and the actions of the Malaysian Wildlife Department suggest they too are also taking a stand. The main problem for the species, however, remains the loss of their habitat and the decline of the wild populations from which these two originally came.”

Ir. John Kenedie, head of the North Sumatra Conservation Agency of Indonesia’s Ministry of Environment and Forestry stated, “We would like to thank the Malaysian Authorities for their actions in this case and the SOCP for arranging the repatriation of Citrawan and Bobina. Indeed international collaboration is essential if we are to effectively address the illegal wildlife trade here in SE Asia and this is an excellent example of governments working closely with NGO’s to achieve that goal. The challenge now is to build on this and reduce the numbers of orangutans and other species still being captured and traded illegally in the region.”

Dr Yenny Saraswati, the SOCP’s Senior Veterinarian added, “We’re always glad to receive confiscated illegally captive orangutans and these two little ones are no exception. But on the one hand its sad that so many still end up as illegal pets or in the trade in the first place. but at least these two now have a chance of a full and productive life in the wild, contributing to the long term survival of their species, once they’ve passed their medical checks and quarantine period and have developed the skills they will need to survive once again in the forest.”

“Citrawan and Bobina are now recovering from their journey from Kuala Lumpur at the SOCP orangutan quarantine centre near Medan, North Sumatra and will be gradually introduced to other confiscated orangutans of the same age once their quarantine period is completed. They will eventually then be transferred to one of the SOCP’s two reintroduction centres in Aceh and Jambi, where they will join other orangutans that have already been released thus helping to build up a new wild population of this critically endangered species”, clarified Dr Singleton.

The shipment of these orangutans to Medan from Kuala Lumpur was generously arranged free of charge by Malaysia Airlines Berhad (MAB). Anita Kushairy, Head of Corporate Communications at MASkargo explained, “This is the third shipment of Sumatran orangutans that we have flown to Medan but these two are by far the youngest. As a member of the IATA Live Animals and Perishables Board, Malaysia Airlines practices strict compliance to the Convention on International Trade and Endangered Species of Wild Fauna and Flora (CITES). In line with this, we pledge our full support for international government, inter-governmental and non-governmental organizations that are managing wildlife populations and will work cooperatively towards eliminating illegal transportation of protected species worldwide and saving wildlife heritage.”