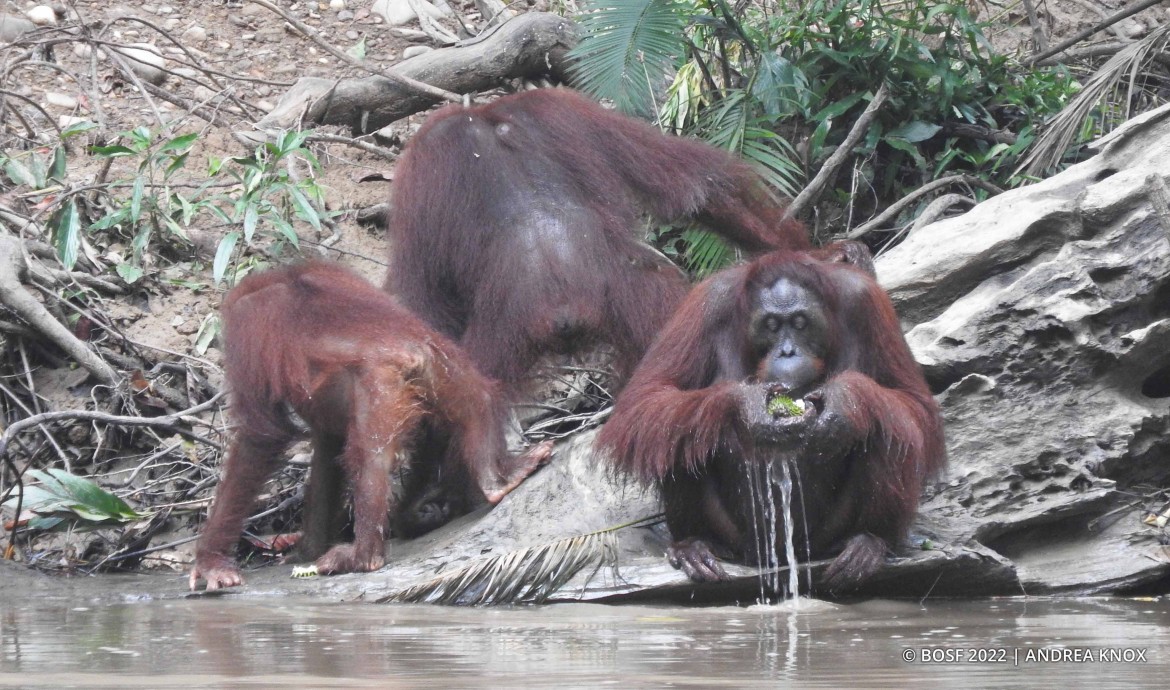 Orangutans are absolutely fascinating to observe. If you pay attention closely, you will uncover a world of interesting behaviors and exciting interactions. One such interesting event in the lives of orangutans is the possibility for them to come together and form a 'party'. Our Post-Release Monitoring (PRM) team and field staff often get to see an orangutan party this while on patrols of the forest.

Technically speaking, an orangutan ‘party’ describes the gathering of two or more orangutans in one location, at a maximum of 20 meters from each other, and within eyesight. Remember— orangutans are generally solitary, except for mothers and their young.

Andrea Knox, the BOS FOundation's International Communications and Research Advisor explains: “When we say orangutans are in a ‘party’, we don’t mean that they are dancing or sitting around a hotpot together. It simply means that they are together in one group, where the actions of one individual can be seen by another and potentially impact their behavior.”

Orangutans, despite being semi-solitary animals that spend most of their lives roaming the forest alone, will sometimes meet other orangutans and interact with them for a limited period of time. “Orangutans are what we call a ‘solitary but social’ species. With the exception of their juvenile years and mothers raising their children, they spend the majority of their lives almost entirely alone. However, all other great apes species, from gorillas to humans, (yes, humans are great apes!) live in social groups. It is highly likely that our shared common ancestor with orangutans from tens of millions of years ago was a social species,” Andrea adds.

Orangutans live mostly solitary lives, Andrea says, because their evolution was influenced by the very challenging environment of Southeast Asian jungles. As large mammals, orangutans require a lot of food, and if they lived in social groups in the jungle, there might not be enough food for an entire group in one area. This pressure is what likely saw the orangutan evolve into a semi-solitary species, albeit with the capacity to socialize. If food is plentiful, and orangutans are familiar and sociable with one another, there is nothing to stop them from coming together in a ‘party’.

Females can often be found in ‘parties’, yet males are not known to ‘party’ together. Once a young female orangutan reaches maturity and leaves her mother, she typically does not travel far and will establish a home range adjacent to that of her mother. Due to this, the most common form of orangutan ‘party’ is that amongst related females. Males who have reached sexual maturity will travel much further away from their mothers and, after growing cheek pads, are less likely to tolerate other flanged males in one group. When two adult males meet in the same location, it is more likely that they will exchange displays of dominance than eat fruit together. In other words, instead of a party, they have a fight. 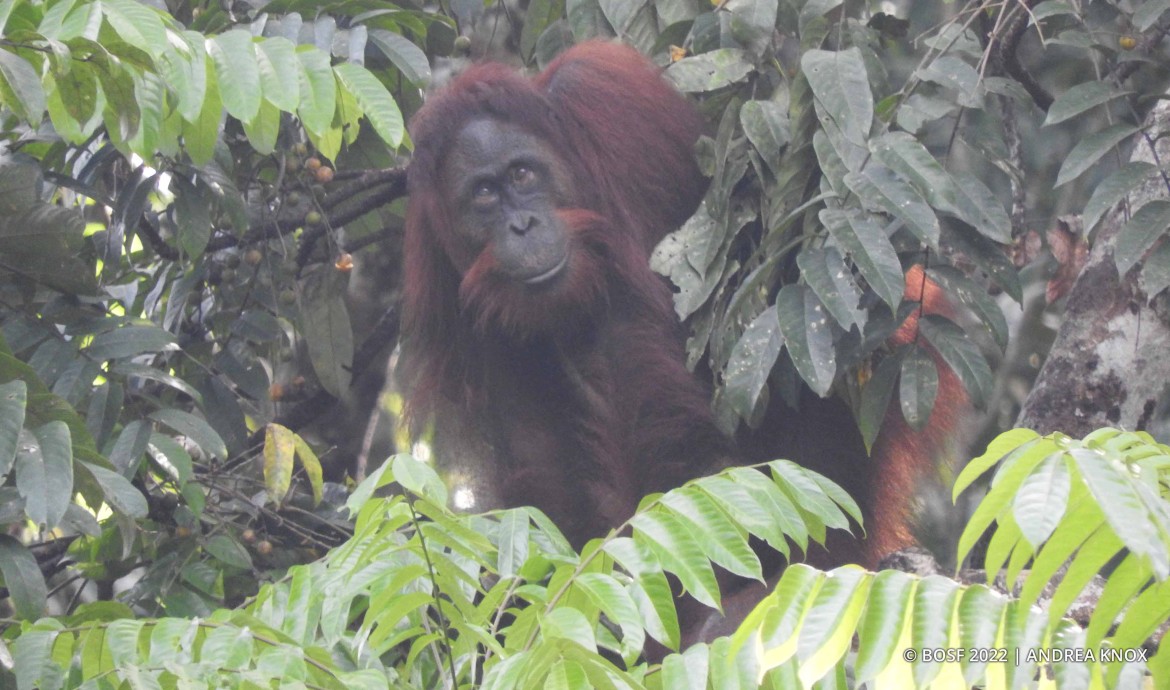 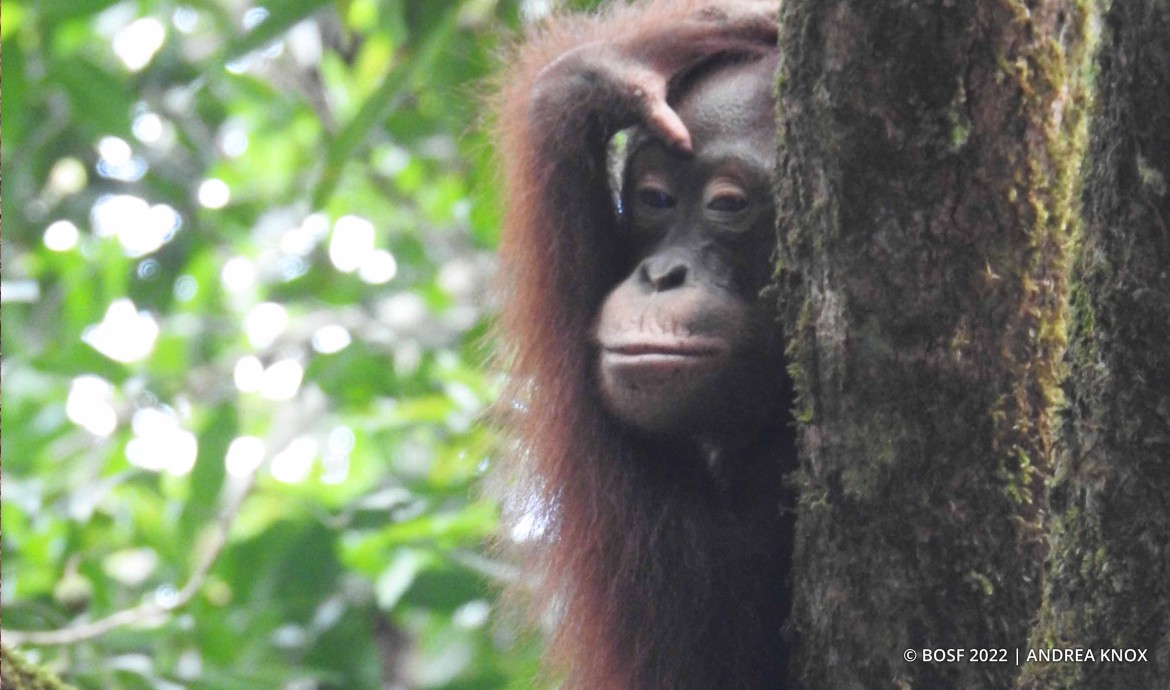 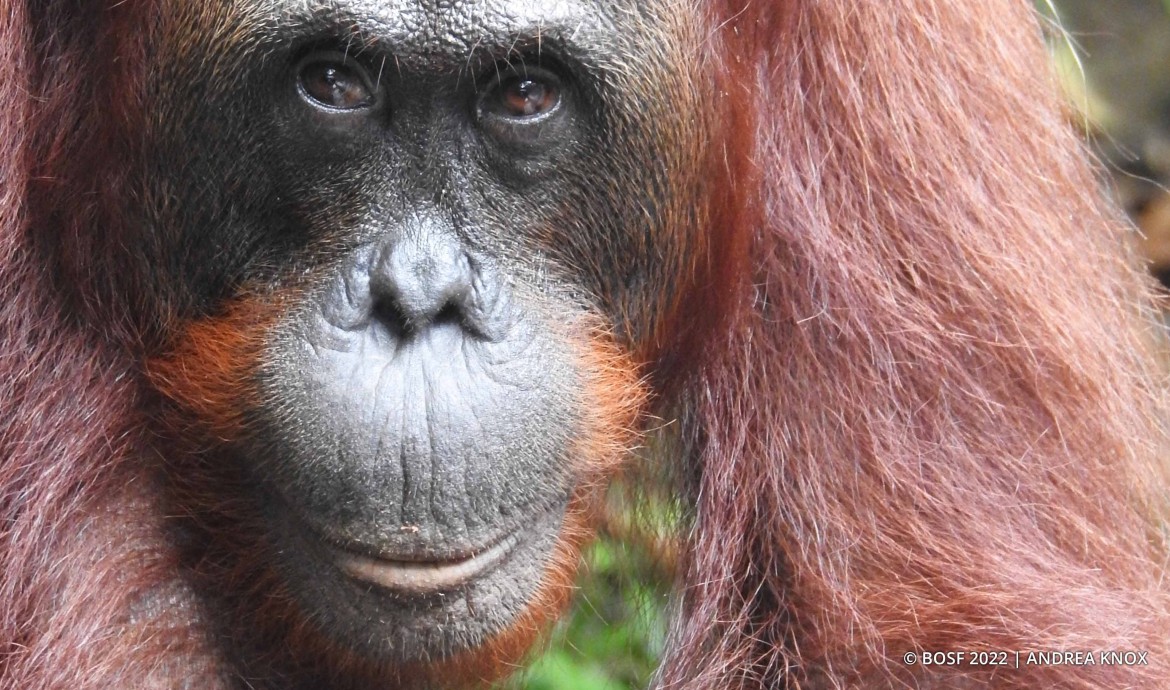 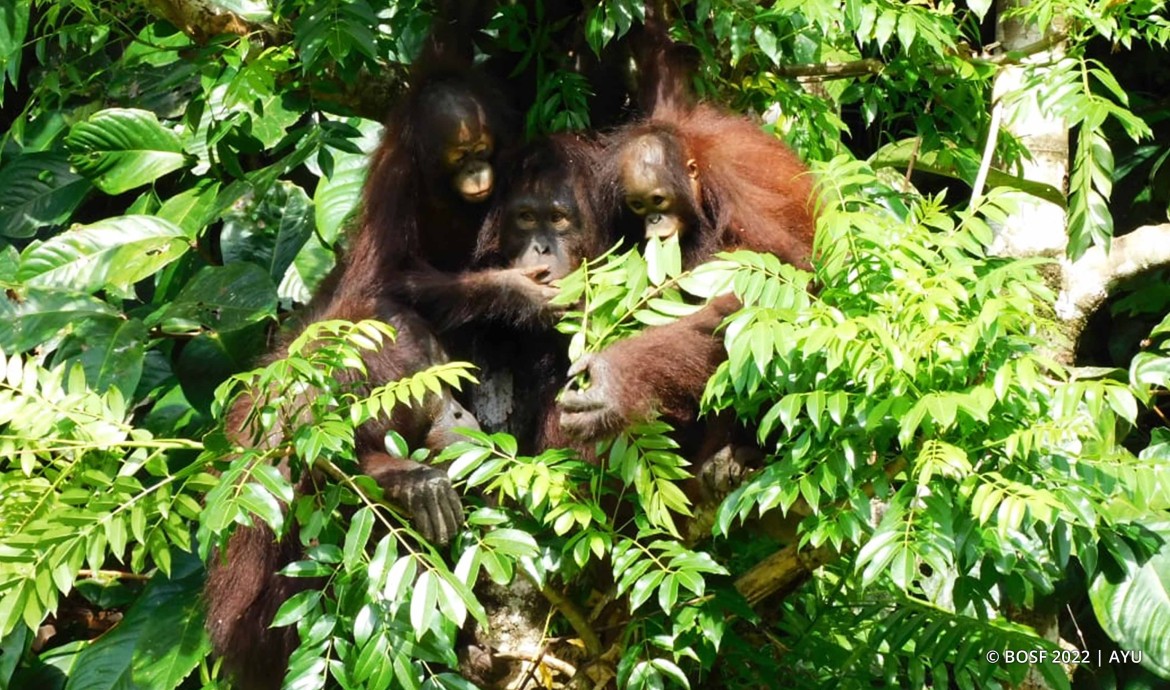 It's a party! Lesan, Ayu, Sayang and Padma. 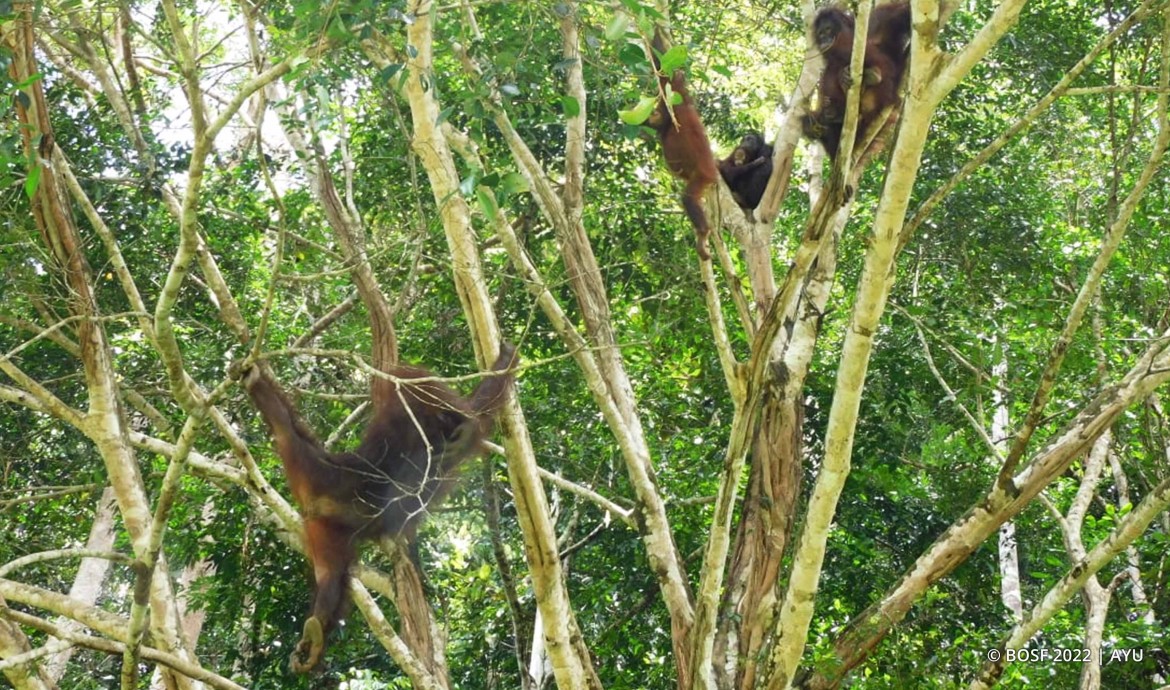 It's a party! Lesan, Ayu and Sayang with Padma, Theresa and Berani. 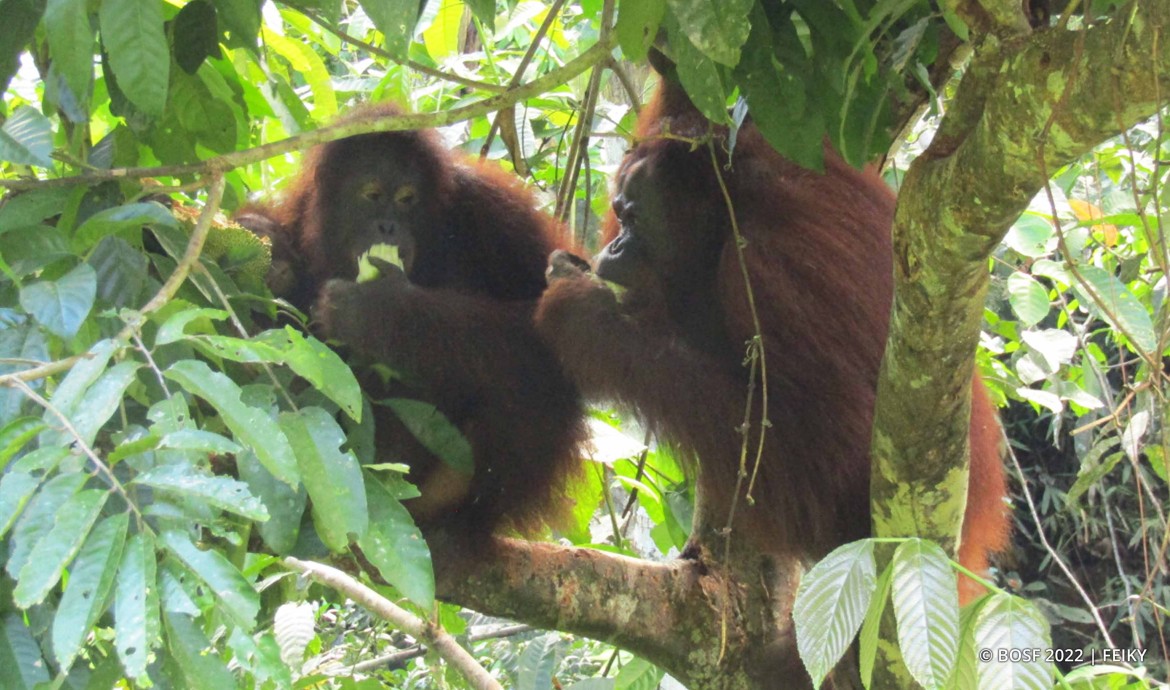 Sayang and Bong having a snack. 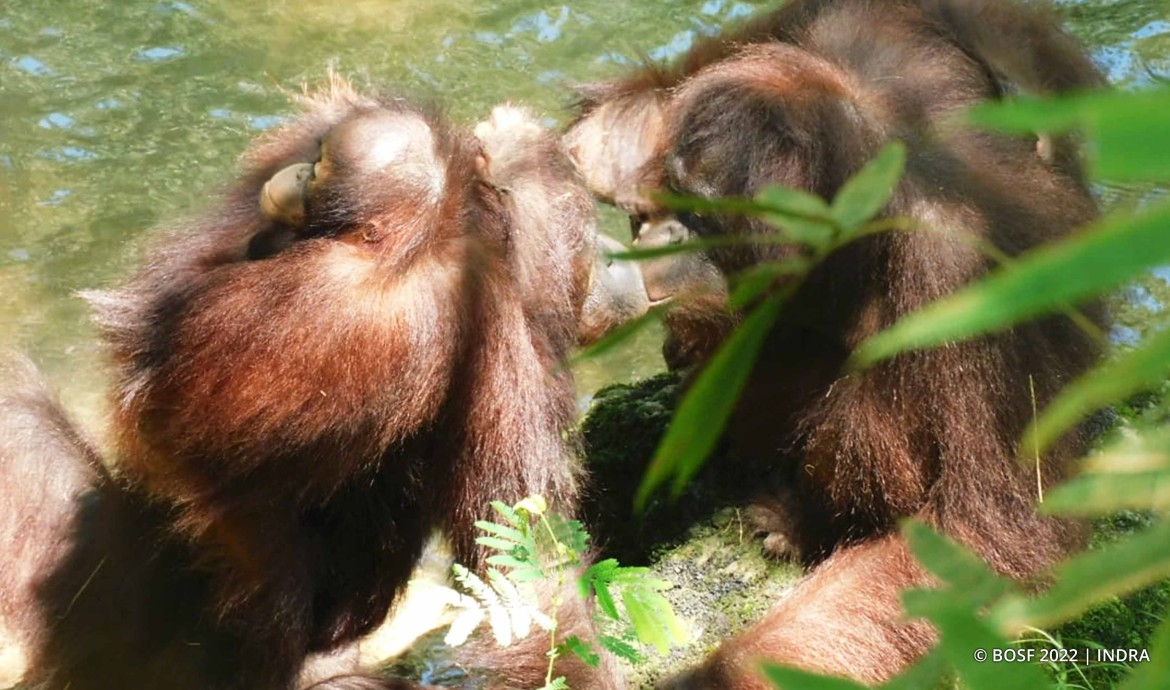 Ayu Siti Nurika Agustina, BOS Foundation Camp Coordinator in the Kehje Sewen Forest, East Kalimantan, shared her experiences observing orangutan ‘parties’ in March last year; “On one patrol, I saw three mother-offspring pairs in a big fig tree, but they were at different heights. There was Lesan and Ayu on a low branch, Sayang and Padma in the middle, and Teresa and Berani at the top."

You can see more of Lesan and Ayu here.

Ayu observed the three pairs interact with each other: Lesan and Teresa groomed each other, while Sayang took care of baby Padma and Ayu (Lesan's offspring) as she moved around the trees. However, on another occasion our PRM team spotted Theresa and Sayang fighting in front of Camp Lesik, for a reason unknown to the team. This perhaps demonstrates that orangutans can also experience ups and downs within their social relationships, just as humans do.

Eko Prasetyo, the BOS Foundation's Orangutan Conservation Specialist, who once served as Camp Coordinator, also shared his experiences observing orangutan ‘parties’. He has seen male and female orangutans roaming the forest and eating in the same tree together over several days. This type of behavior between two orangutans of the opposite sex, known as ‘courtship’, usually ends in copulation. It is also defined as a type of ‘party’.

Andrea shared another interesting story relating to an orangutan ‘party’ she observed during her time working as Camp Coordinator of the PRM team in the Bukit Batikap Protection Forest, Central Kalimantan. Since the rehabilitated orangutans released by the BOS Foundation were raised in social groups in Forest School, many have formed strong social bonds. Once they are roaming free in the wild, reintroduced orangutans do live mostly solitary lives, but are more likely to gather together in ‘parties’ than their wild counterparts. During her days in the Bukit Batikap Protection Forest, Andrea and the team frequently encountered orangutans in groups, and easily learned who were friends and who did not get along.

Andrea and the PRM team encountered Cindy, Riwut, Cilik, and Olbert in a ‘party’ one afternoon back in June of 2018. Riwut, the daughter of Cindy, was still very dependent on her mother and still lived together with her. Cilik was Cindy’s firstborn who had already matured and was living on his own, but was still occasionally seen visiting his family. Then there was Olbert, an unrelated, sexually mature male who had yet to grow flanges. “While they all got along, I watched in amusement as all three vied for Cindy’s attention,” Andrea recalls.

Riwut was in a playful mood and motioned for Cindy to join her in rolling around on the ground. Cilik wanted to stay close to his mother during the visit and unsuccessfully requested food from her. Olbert, meanwhile, was clearly trying to win Cindy’s attention as a male suitor worthy of mating with. While Cindy gave some time and attention to each of them, it was Olbert who ultimately won her affections - and that is how the team believes Cindy’s third child, Comet, was conceived!

As always, we are delighted to learn more about orangutans and share stories from our teams in the forest!