January 13, 2021 — Not every orangutan resident of the BOS Foundation’s rehabilitation centers will have the opportunity to return to a natural forest where they can live wild and free. There are a number of individuals who, due to various reasons, would be unable to live independently. We call this group of orangutans the "unreleasables". Infectious diseases, physical disabilities, or prolonged captivity that leads to an inability to develop natural behaviors, all decrease an orangutan’s chance of surviving in the wild. It is likely these orangutans will remain in a rehabilitation center for the rest of their lives.

At the Samboja Lestari Orangutan Rehabilitation Center in East Kalimantan, we look after a number of old, unreleasable orangutans who have infectious diseases or are unable to develop natural behaviors. One of them is Papa, a 31-year-old male, the second-oldest resident at Samboja Lestari after Romeo.

Papa came from Taiwan and arrived at the BOS Foundation on 1 September 1994, at the age of five. Judging from his origins, it is obvious that Papa was a victim of the illegal wildlife trade. Upon his arrival, Papa was found to be suffering from the orangutan strain of Hepatitis B, which is highly contagious and difficult to cure. This meant that he had to be housed in an individual enclosure. To see any orangutan end up at our rehabilitation centers is sad enough, but to know that some arrivals have little or no chance of rehabilitation and future release is truly devastating.

However, in 2010, the medical team cured Papa of the disease, which meant he could start mixing with other orangutans. In 2017, we saw an opportunity for Papa to live in open space on newly-cleared Island #4, so our Samboja Lestari team immediately moved him to the man-made island.

Papa has been living on the island for three years now, where he is accompanied by female orangutans Vera, Citra, and Isti. Papa is known as the ‘gentle giant’, as he has never shown any aggression toward our technicians during food distribution. Unlike some other large males, if Papa sees a stranger watching him from across the island, he will quickly retreat deeper into the island or hide behind the bushes. 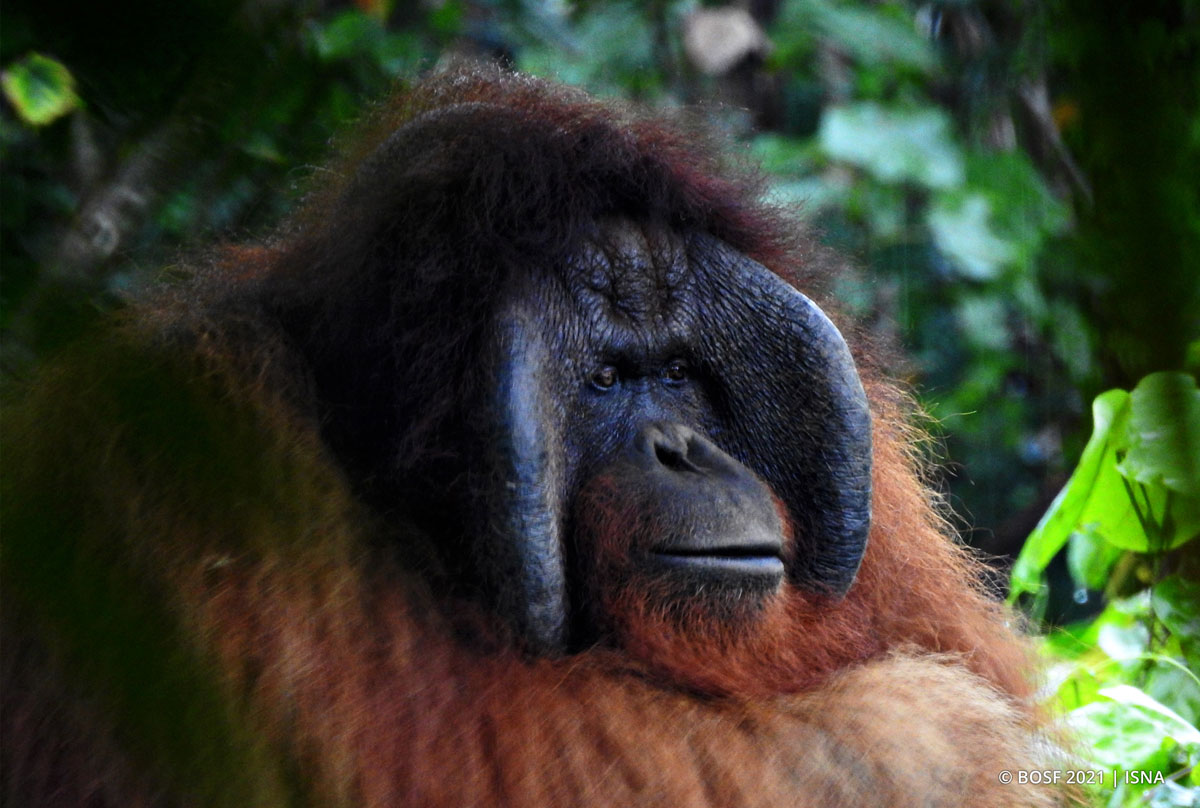 Papa is also never aggressive towards Vera, Citra and Isti. He actually prefers to ignore them and spend time alone, away from the three females. He seems to be thoroughly enjoying his ‘me time’ on the island!

Perhaps owing to the forest-like sanctuary island on which he lives, Papa’s condition has greatly improved. He has never fallen ill on the island, and looks comfortable in his surroundings. Unfortunately, Papa is still unfit for release in a wild forest, as he has yet to perfect his basic survival skills; brachiating, foraging for natural food sources, nest-building, and much more. However, his improved condition provides hope for other unreleasable orangutans to recover from illness and live on one of our islands!

Keep up the good spirits, Papa! We are so excited to watch your progress with each passing day!