BOS Foundation: Grunting Justin Gets His Point Across! 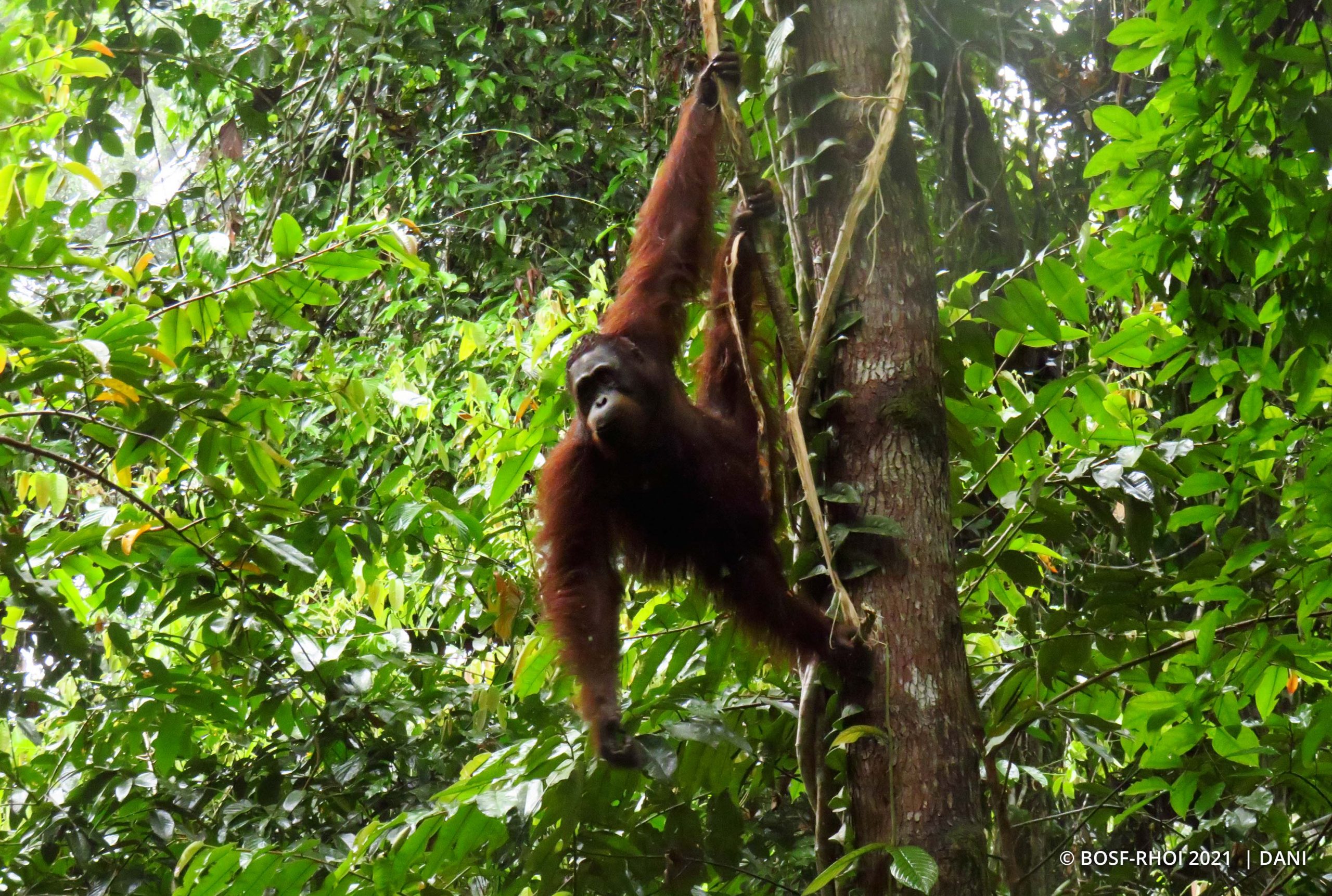 MARCH 30, 2021 — One late afternoon in mid-February, the Post-Release Monitoring (PRM) team from Camp Nles Mamse in the Kehje Sewen Forest, East Kalimantan, was returning from a regular orangutan patrol when Justin was spotted wandering not far from camp.

Not wanting to miss a moment, we immediately followed and observed him. Justin, who was released in the Kehje Sewen Forest four years ago, was seen on this day doing little else other than sitting up in a tree and observing his surroundings. He did this for quite some time, then moved to another tree and climbed down to a lower branch. We heard the cracking sound of branches breaking, indicating that he was building his night nest. With the knowledge he was settling down for the night, we took note of his nest location for the next day’s observations and headed back to camp.

The next morning, we began nest-to-nest observations on Justin: following him from the time he leaves his nest in the morning, until he builds his next evening nest. Unfortunately, we lost sight of Justin shortly after he had climbed down to the ground and moved quickly toward a steep valley, leaving us behind on the dense forest floor.

During the short observations we were able to conduct, Justin seemed particularly fond of liana pith. He also ate calamus and wild ginger shoots, as well as young leaves. However, he appeared to spend more time and effort on locating and savoring liana piths. 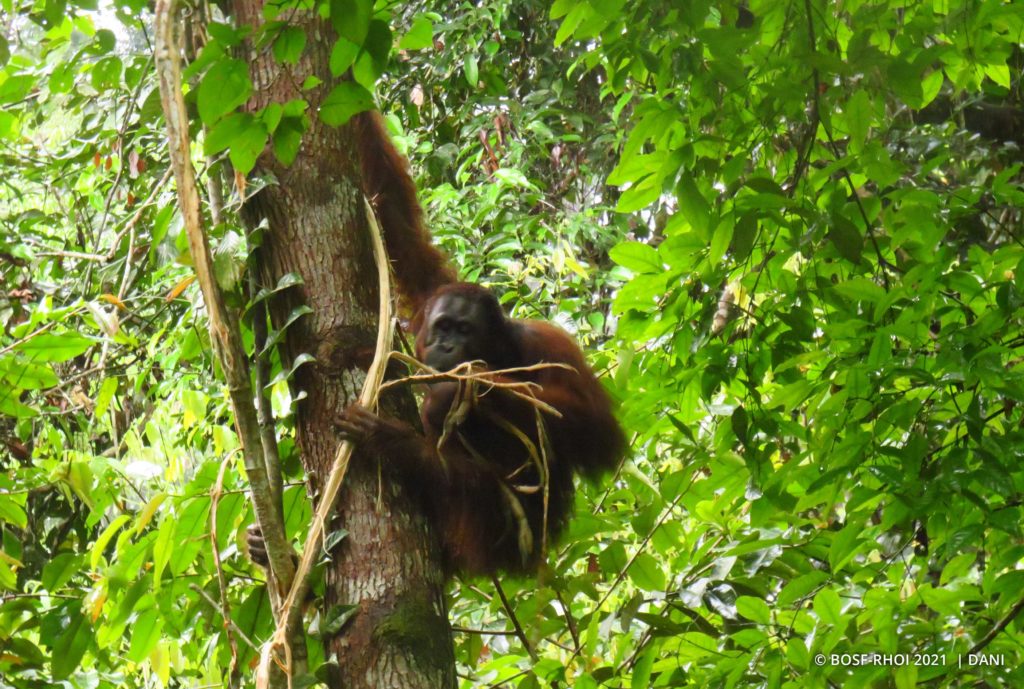 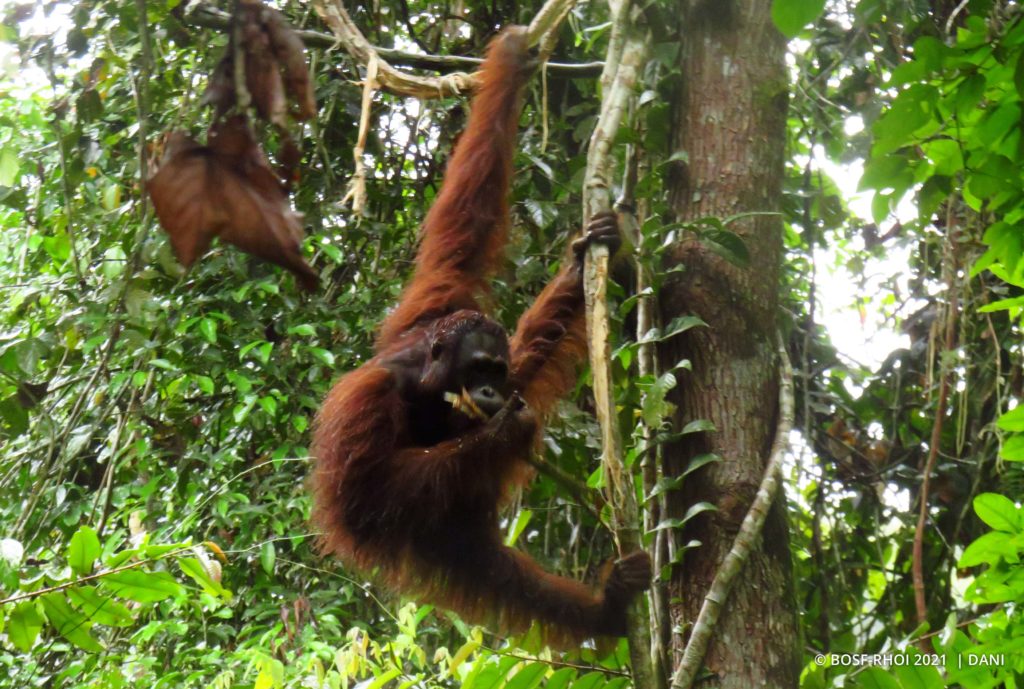 That day, Justin indicated his dislike for human presence by kiss-squeaking and grunting at us; sounds that orangutans produce to show they are annoyed. A kiss-squeak is a very loud smooch-like sound made by pursing and smacking the lips together; while the grunting is reminiscent of that of a pig. The two sounds don’t always appear together, so when they do, we know the orangutan is being serious and we got the picture – Justin didn’t want us watching him!

Justin threw twigs at us to make sure his message was understood loud and clear, then climbed up a tall tree. We observed him from afar for over an hour in the tree, before he finally climbed back down to the ground and disappeared from sight.

We understand that Justin’s anger is a sign of his independence, thanks to his four years of experience exploring the forest. Great job, Justin! We hope you continue to thrive in the wild.